No, I'm not talking about Paris and Nicole! For that matter I'm not even talking about two mares. I am referring to the relationship between two geldings, Trillion and Faune. Trillion and Faune are both very accomplished horses with impressive show careers. They were both champions at places like the Winter Equestrial Festival in Florida and were top horses in the country in their divisions. In fact, after talking with Faune's mom one time, we are pretty sure that they may have competed against each other in the Regular Working Hunters at one point. 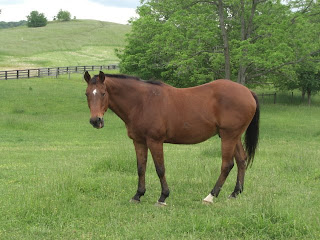 Trillion is a Dutch Warmblood and he came to us from Florida. Faune is a Selle Francais and he made the journey from Boston to enjoy a first class retirement with us. Both of these horses are full of personality. They are also "roommates" here as they go out in the same pasture together. Prior to Trillion's introduction to the group Faune was the boss horse of the field. Trillion had other ideas about that, at least at feeding time, and decided that he was going to be the boss. Faune was fine with this as Trillion really only cared about being "number one" at meal times. He wanted to have his feedbag put on FIRST. The rest of the time if Faune wanted to be bossy he would just go with the flow. 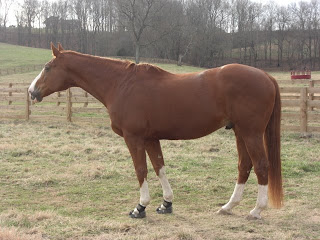 All was wonderful in their worlds until Trillion decided that it was time to get to know Sebastian better. Sebastian is an adorable Connemara/Irish Draught cross that joined us from Long Island. Faune had a problem with Trillion's desire to become better friends with Sebastian. Sebastian was HIS friend and he wanted Sebastian to graze with him ALL the time. So I started seeing a lot of "ring around the rosey" as Sebastian was shuffled around while Faune and Trillion jockeyed for position with Sebastian. It appeared that the relationship between Faune and Trillion was becoming strained, as their delicate balance of sharing the number one spot was being upset. 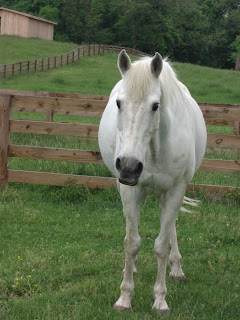 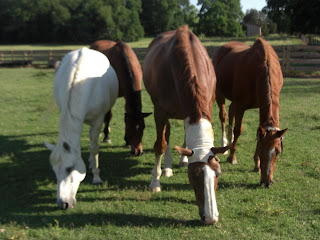 L-R: Sebastian, Trillion, Faune, Ogie
As fate would have it Trillion and Faune started spending a lot of time in the barn together, with their stalls right next to each other. I kept waiting to see if their relationship would change. But no, they would go out in the evenings and rejoin Sebastian and Ogie, and go back to ignoring each other. Then one day I turned them out, went back to the barn for a few minutes, and when I walked back out to their pasture I saw this


I was quite surprised! What is even more interesting is I now see them grooming each other all the time. Which leads me to the question: Are Faune and Trillion frenemies or BFF? I guess only time will tell!
Posted by Melissa-ParadigmFarms at 11:35 AM

That is hilarious! And poor Faune with his stocking on his head!

I always giggle at the fact that my $1000 polo pony, acquired cheap because she had just broken someone's collarbone, is spending her retirement with all of these A-circuit, big money horses. I am sure SHE believes that is where she belongs and she's finally been returned to her rightful place in society, ha ha!

Hi, this is Trillion's other mom in Florida. I would have to guess BFFs if I know Trillion. He likes to act grumpy, but always loved his pasture mates, and really missed them when he couldn't be turned out. By the way, Faune is adorable.

Hi :) I am Faune's mom and I am loving keeping up with the blog. Thanks to Melissa (<3) and all of the other horse moms out there. And thanks for the nice comments on my boy, Faunie :D