Wiz trotting through the pasture; he has a beautiful, huge, floating trot. 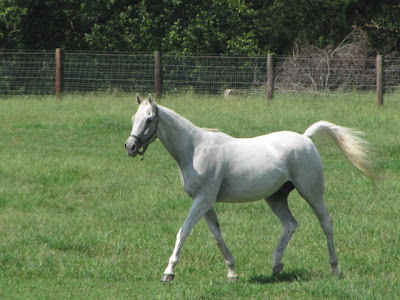 Wiz had a successful career at the track and when he was about six years old he was personally picked out by none other than Rodney Jenkins, one of the most successful Grand Prix jumper riders in history, to be trained as a jumper. Rodney was training Un Jin Moon, one of the children of the notorious Reverend Moon who founded the Unification Church. Wiz was bought by Un Jin on Rodney's recommendation. So Wiz was actually a "Moonie" for awhile!

Darn That Alarm, sire of Wiz; lots of family resemblance between father and son! 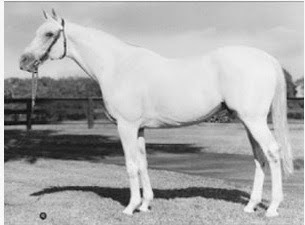 Wiz was in training with Rodney for a couple of years, and towards the end of that time Rodney became interested in training race horses and Un Jin also got out of showing jumpers. The end result of these changes was that Wiz was put back on the track. He was soon sold to another racing stable in Maryland where he had 30 more starts and stayed on the track until he was nine years old. Wiz left the track a winner. He won his last race and between his starts at the track and as a steeplechaser (this horse raced a lot!) he had career earnings of almost $250,000.
Wiz checking things out on his first day with us 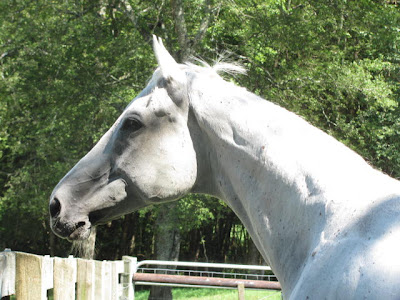 Wiz was spotted at the track by someone with connections to the eventing world. After learning of his two year period in training with Rodney Jenkins as a jumper Wiz was purchased as an upper level eventing prospect and left the track behind for the second time. Apparently Wiz excelled in all three phases, dressage, cross country and stadium jumping. He was soft and supple for dressage, fast and bold cross country and of course had incredible training in the show jumping arena from Rodney Jenkins.
Wiz with O'Reilly, Clay and Bella the dog 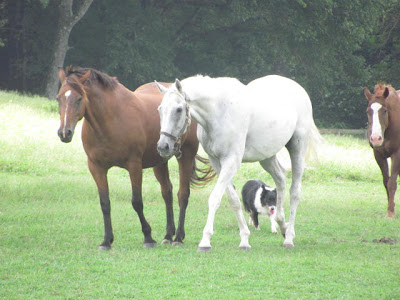 The only thing that kept Wiz from climbing the ranks in the eventing world was the toll on his body from his racing days. It was decided that it wasn't fair to push this talented horse with a big heart beyond what his body could physically take anymore. His connections began the search for the perfect home for Wiz. They were very careful in choosing his buyer as they knew it would be easy for someone to be tempted to really push him up the ranks either as an eventer or a jumper.
Wiz grazing with some of his new friends (Lucky and Spike) 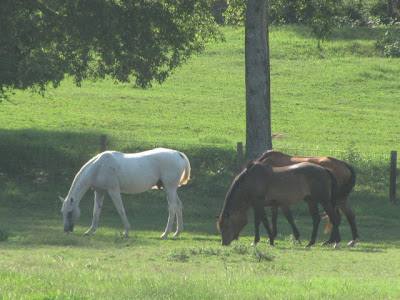 This is where Wiz's current mom (and forever home) came into his life. Wiz's mom began riding at the age of four, and she rode with some very prestigious trainers on the "A" circuit in the hunters and equitation and also spent a few years moving up the ranks in eventing as well. When she was a freshman in high school her parents sent her to a ski academy for the winter. At the same time her parents leased out, and eventually sold, her horse.
She left the riding world for awhile and entered the world of skiing, competing at the elite level in Freestyle Skiing. When she was 17 years old she made the U.S. team and skied in her first World Cup in Italy. She was on the U.S. team for 10 years, and she was the national champion and 5th in the world. She had always promised herself that when she stopped skiing she was going to buy a horse and start riding again, and that this time no one was going to sell her horse.
She found herself working at Allure magazine in New York City, adjusting to life after skiing, when 9/11 happened. She ended up moving to Baltimore shortly after 9/11, and being so close to the terrorist attacks had made her realize that she needed to keep living her life and doing what she loved, and that was riding.
She didn't waste any time once she decided she was going to ride again, and found an online ad for Wiz in November. She had not ridden a horse in about 14 years when she went to try Wiz and he actually ran away with her the first time she rode him. As she said Wiz is very sensitive, and the natural reaction when a horse speeds up is to pull on the reins. Of course race horses learn to go faster when their jockeys pull on their mouths and she and Wiz kept going faster and faster and faster around the ring. She said the main thing she remembers from that ride is Wiz's owner yelling "circle, circle!" She finally managed to circle, let go of the reins, and stop him with her seat. Quite a ride for her first time back in the tack after 14 years!
Wiz grazing with his current BFF, Dutch 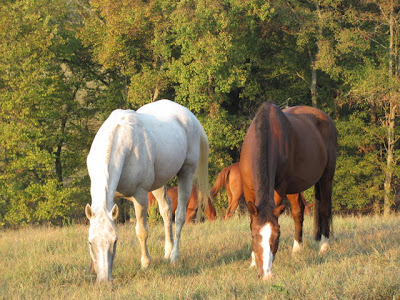 She went back to ride Wiz a few more times, with each ride getting better and better, and ended up purchasing him. I love how she describes their relationship. As she said they were both athletes that were retired from the elite level, her from skiing and Wiz from racing, and they mainly just enjoyed their time together without the pressure of expectations.
They went on long hacks together through the rolling hills of Maryland, and then when they moved to Wisconsin they would ride through the tall grass and have adventurous rides encountering things like turkey vultures. They also had the opportunity to work with some outstanding trainers including Kim Walnes, famous for her partnership with The Gray Goose, and Niall Grimes, who was the assistant trainer for international show jumper Laura Kraut.
Ten years into their partnership Wiz's mom decided he had earned a full retirement and the opportunity to be a horse. Wiz has certainly had many interesting job titles during his career: racehorse, steeplechaser, show jumper, eventer, Moonie (I had to put that one in there, it just makes me laugh!), and most important of all a friend to his mom.
Posted by Melissa-ParadigmFarms at 7:58 PM

What a lovely horse, and a lovely story!

Thanks for putting this together, Melissa! I love it. :)

What a great story! Reading about the residents...hands down...my fav part of your blog. (and the beautiful pictures!)

Such a heart touching story and such a beautiful horse!

If only Wiz could talk -- the stories he could tell. Luckily he is a Paradigm and you could share his story.I agree with Sylvia I love the intro to the residents and how they (and their owners) adjust to life on the farm.

Going back a few entries on your blog -- I love that the cribber stopped cribbing without the collar.

I enjoy how you make the horses stories like a love story. Makes me smile.