In Memory of Bear

I think our Schipperke, Bear, had more fans and admirers than all the other horses, dogs, goats and various pets on our farm put together.  He had a magnetic personality that was irresistible to both adults and kids and people were drawn to him like a magnet.  Bear was with me for a little over 13 years, but yesterday was our final goodbye. 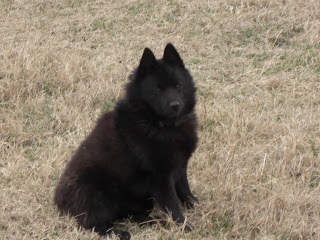 Bear and I met at Judy's Tack Shop in Franklin, TN over 13 years ago.  As I walked into the tack store one day my friend, who happened to be managing the tack store at the time, hung up the phone and announced that she was just in the middle of leaving me a message.  I asked her what she was calling about and she held out her hand and said "would you like to have this puppy?"  A cute, black puffball of a puppy was in her hand.  Of course I said yes, just like anyone else would have done.

Bear and Carter; he was wonderful with Carter and always chose to sit right next to his carseat in the car 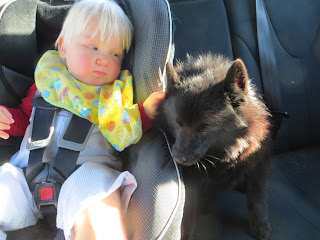 To be frank Bear was hell on wheels as a puppy.  There was a period of time in his life where he really thought his name was Damn It Bear because he heard that phrase so often.  He was willful (that trait never waned), highly energetic and had a chewing phase that was unbelievable given his tiny stature.  In his first six months Bear had chewed up a blue ink pen in the den and left a permanent stain on the floor, chewed the corners off the floor molding all through the house, eaten the handles off the bathroom cabinets, eaten the couch, eaten a zillion pairs of shoes and destroyed who knows how many pillows.  He went through countless rawhide bones and nylabones.

One time my parents dog-sat Bear as a puppy and in a 24 hour period he chewed through (as in completely through) several of the hand carved spindles on the railing of their balcony, chewed up an ottoman and pulled up a section of carpet in their house.  Needless to say it was a long time before they offered to be Bear's babysitter again.

Bear the day he came into my life, he was six weeks old. Note his size in relation to the outlet behind him. 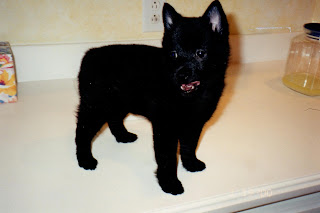 Bear spent his first couple of years going to work with me every day back when I still owned my recruiting company.  Even as a puppy he was always on his best behavior at work.  Most of the time Bear liked to sit on the sofa or one of the wing chairs in the lobby and greet everyone that came in.  If he got tired he would wander back to my office and nap on his bed for awhile.  Bear was such a cool dog he inspired a few other people in our building to get their very own Schipperke.  Like I said, people have always been drawn to Bear like a magnet.

Bear after one of his many surgeries. He was very, very familiar with wearing a cone. I always think of that picture that floated around on Facebook for awhile with the caption "It's all fun and games until someone winds up in a cone."  The story of Bear's life. 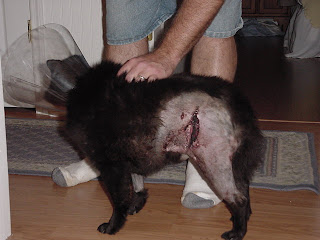 Bear was a very experienced horse show dog and traveler.  He had been to 13 states and had traveled in cars, airplanes, trains, and ferries. Bear had no fear whatsoever (hence his multiple surgeries) and would happily ride around on any mechanized vehicle. If he were a person Bear would have traveled around to amusement parks, always sitting in the front seat of the biggest, baddest roller coaster he could find.  He would often accompany Jason on the tractor and he loved it when my dad would put him on the back seat of his motorcycle and drive him around on the driveway. I think Bear knew how fast the motorcycle could go and was always hoping that my Dad would take him for a real motorcycle ride.

riding on the tractor with Jason 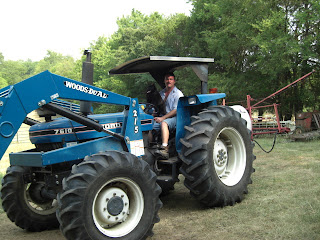 When I sold the recruiting company Bear "retired" from the corporate world and spent the next decade enjoying his retirement.  He always wore a "Life is Good" collar because in Bear's world life was always good.  He was a legend in his own mind and continually picked fights he couldn't win. Every 2 to 3 years Bear wound up having a major surgery as a result of his tendencies to get into bar fights.  Through the years he had over $12,000 worth of surgeries, 4 sets of drain tubes, wore the cone of shame countless times, had over 200 stitches and 30 staples.  Given that he weighed all of 13 pounds these are some impressive statistics.

Bear was not thrilled to be dressed up as Santa Claus 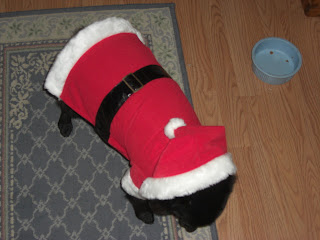 Bear saw me through a lot of major life changes in our years together.  I really wasn't sure how he was going to feel about Carter joining our family.  He was always good with Carter but the first few weeks I joked that Bear would have happily taken Carter in his walker to the top of the driveway and given him a nice push.  After a few weeks the dynamic changed and Bear became Carter's champion and defender.  The feelings were mutual as Carter adored Bear.

Carter was a very unhappy pumpkin on Halloween . . . 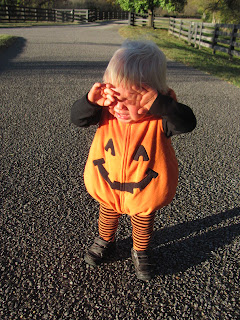 . . . until Bear came along. Then Carter became one happy pumpkin. 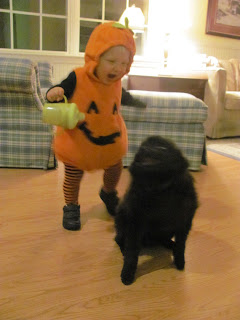 Bear was only 13 years old which makes his loss even harder to take, our family tends to have pets with very long lives.  However his years of bar fighting and being a legend in his own mind were catching up to him.  He was in pain all the time and it was getting worse.  He had two herniated discs in his back and Jason and I had already decided that we would not be putting Bear through a fifth major surgery. The recovery was going to be too long and too hard, especially at his age.  His vet that had seen him through his many traumas through the years felt this surgery was not in his best interests so we went the pain management route instead.  That was successful for several months but in the last few days it became apparent that his decline was reaching the crisis stage, and the only humane option left was euthanasia.


waiting to go for a ride in the Kubota 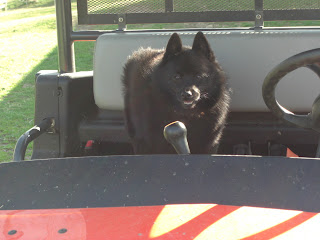 I could sit at my computer typing out Bear stories for days.  He led a rich, full life and absolutely lived every day as if it was going to be his last.  The list of funny Bear stories is almost endless.  At this point the loss is still to raw and the stories just make me cry.  Much of 2012 has not gone the way I envisioned it to say the least, and after all the losses we've had this year I find it sadly ironic that on the last day of the year we had to  lose another family member.  Bear was, without question, a member of our family and his huge personality and his antics will be missed.  People are already asking me if I am going to get another dog.  I will at some point, but right now I can't even think about it.  I get some comfort thinking about Bear being reunited with my dad and his dog Bush. I hope they are all together again, driving through green pastures in their Gator.

I started to end this by telling my little man to rest in peace. However Bear always preferred to raise hell, so have fun raising hell little man, I really miss you.

in the back of the truck 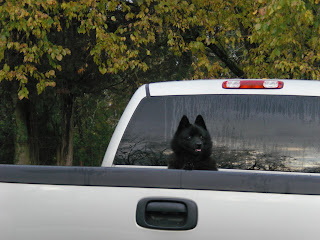 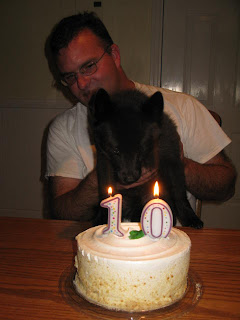 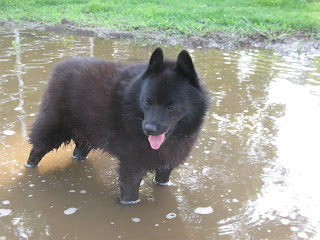 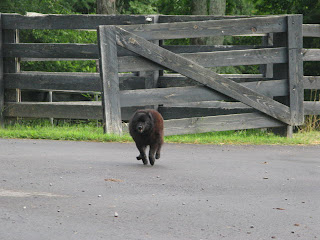 Jo the goat checking Bear out after one of his many surgeries. Jo is saying "wow, you look different!" 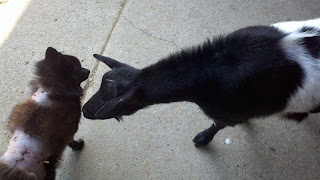 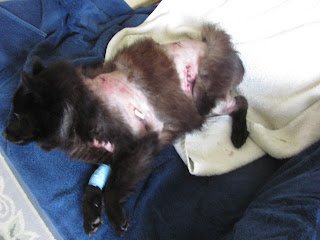 hanging out with Trooper 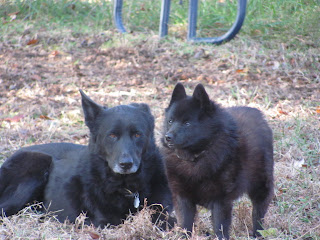 Sledding with Jason after our big snow a few years ago; note the pricked ears.  Bear was a perpetual thrill seeker. 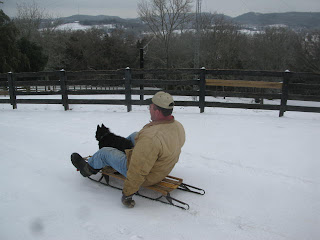 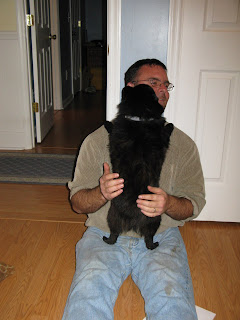 Posted by Melissa-ParadigmFarms at 6:22 PM

I am so sorry for your loss. Bear was quite the character and this will leave a hole in your lives. I hope the Rainbow Bridge has concrete spindles! Hugs.

I am sorry for your loss - but thank you for sharing all the wonderful Bear stories and pictures.

You guys have had a tough year! So sorry for yet another loss.

I am so sorry Melissa. Don't know what to say. Little Bear. :( The last photo with him hugging Jason is how I always thought of him.

You are right - Bear did have a lot of fans! Don't get me wrong, I love the horses but the pictures of Bear always made me smile. The ones of him and Carter are precious.

I hope you guys have a more positive, lighthearted year in 2013!

What a wonderful tribute to a great terror of a dog. I have never forgotten how my own Skippy Zazzoo liked you, and that was why when the ladies who presented me with Bear, when they learned of Skippy's passing, I immediately thought of you, and hoped you would say yes to him. Best decision I ever made, and it has been a pleasure to read how loved he was. Yes, he was a bar fighter and a scrapper...would not expect less of him. Hugs to you, my heart goes to yo uin your loss, but my heart soars for you in the joy you had with him. love, Juni Fisher

Your tributes are always so poignant, heartbreaking and absolutely beautiful. I'm sorry you had to write so many in 2012...

Bear had character. Thank you for telling us about him. Very sorry for your loss..he was one lucky dog to live with your family.

i just found out about this tonight. i'm so sorry for you both. i know how much you loved him. of COURSE they're all on the gator. otherwise heaven wouldn't be heaven.