Every day is a new day when living on a farm. My plans today were to feed horses in the morning, work with the farrier for a few hours this morning, then ride my horse, do afternoon chores, and be done with outside work and on in and start on inside work. Instead we had thunderstorms move through our area last night, and heavy winds came at the beginning of the front. The heavy winds were short lived, less than 5 minutes, but the wind speed was definitely high for a couple of minutes.  The net result was one big downed tree over a cross fence between two pastures, and our already replaced fence completely down at the road. Because we live in a caring community, everyone who drove past our farm last night called to let us know that our fence was down. Our bad fence certainly made for some good neighbors.

In case you missed it, our original mile of wood fence (we have almost 5 miles of it) was built by Maury Fence Company. Within five years section of that fence started falling down because the supposedly treated posts were completely rotted. We have rebuilt three of the four sides of this mile of fence that is in a square shape. We only lack rebuilding the section along the driveway. Jason and I have ended up rebuilding much of the fence ourselves as our trusted fence builders, the ones we worked with for the other four miles of fence, retired. Instead of trusting anyone else to rebuild our fence we decided to do it ourselves. We bought a post pounder, Jason had it retrofitted to mount on the front of one of our tractors instead of the back, and we've rebuilt a lot of fence. It's been super fun and a great way to fill all of the empty hours we have each day (that sentence was typed in sarcasm font).

What we hadn't gotten around to was taking down a lot of the old fence. Last night's wind forced our hand on that, as a long section of it along the road completely fell over. Instead of riding my horse after the farrier left, we spent a couple of hours removing fallen down fence. Thank you so much Maury Fence Company. This will be my millionth reminder that if you are in middle Tennessee, DO NOT let Maury Fence Company do any work for you.


Jason surveying some of our downed fence. This fence is 8 years old and should never have needed replacement at this point, but we already did that as you can see. 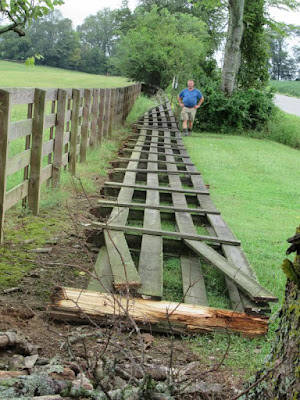 Not all of the sections were cooperative and would fall apart when we tried to drag them off. So we had to cut them up and remove them board by board. 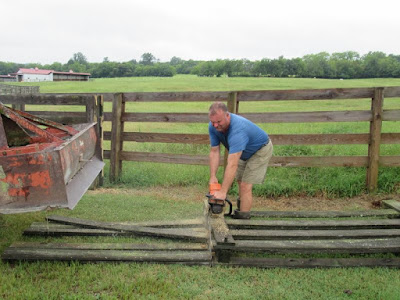 Our plan of action was to cut the downed fence into sections and drag the sections away one by one. This mostly worked except when it didn't. A few sections were so rotted they just came apart completely when any pressure was applied to them. Those sections we had to cut up and remove board by board. Thanks to Maury Fence Company not only have we paid for this mile of fence twice in eight  years, we also have to go to the time, effort and expense of removing the failed fence. We've left most of the fence as we've yet to reach a settlement with Maury Fence Company.  Apparently they have several people pursuing them for the same issue and they have said they can't settle these claims until they reach a settlement with the company they purchased the posts from. The issue is the posts, not the planks. Their view is that the falling over fence isn't their problem in the meantime. Obviously none of the people with this issue agree with that view, but it doesn't change the fact that we still have to deal with the problem.


Jason sawing up an uncooperative section of fence 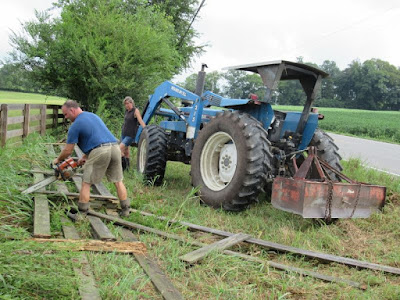 dragging away a section of the downed fence 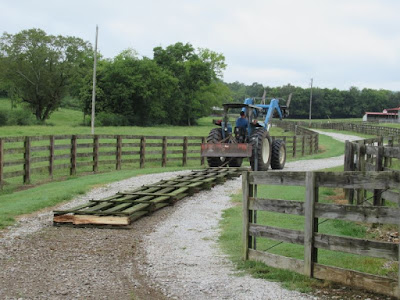 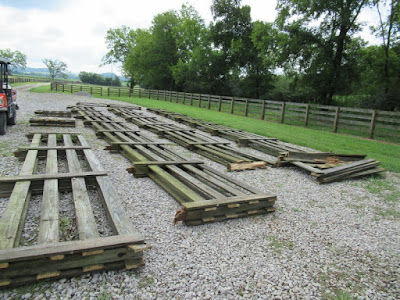 Our next step will be to get a dumpster delivered so that we can dispose of the fence. Unfortunately we cannot burn the old fence because of all the nails. And before anyone makes the insane suggestion, no, we don't have time to remove all of the nails. I cannot imagine how many days that would take. Since we already work seven days per week, 10 - 12 hours per day, that's not happening.

After we finished removing our downed sections of old fence, Jason cut up the tree that had fallen on one of the cross fences. Even though it was a big tree it fell straight and "only" took out one section of fence. For now there is a corral panel in the missing fence section's place. Jason will get to rebuild that fence section when he has time in the next few days.

The next job will be doing some more body clipping. We have a few Cushing's horses that are very determined and accomplished hair growers, and round three of body clipping will be starting in the next couple of days. 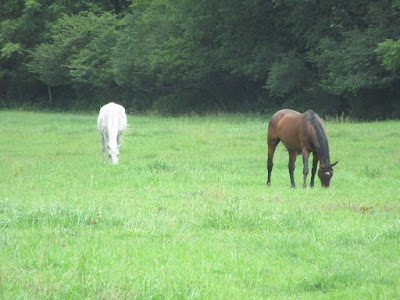 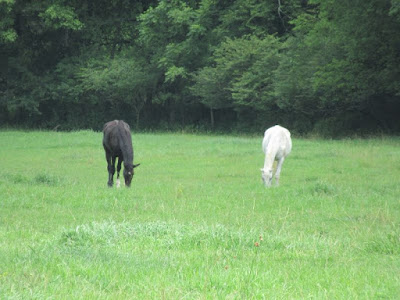 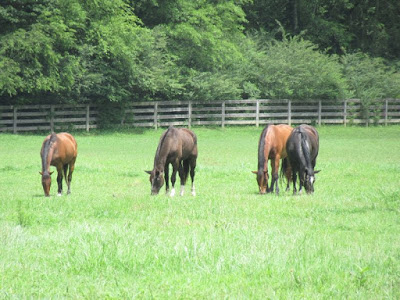 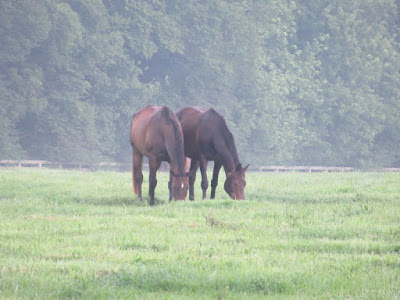 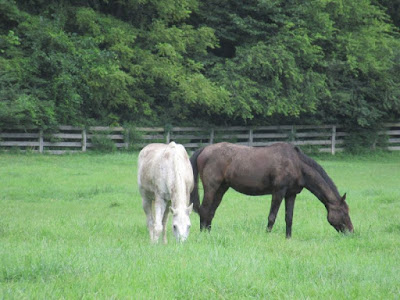 Cocomo, Silver and George starting to congregate for breakfast 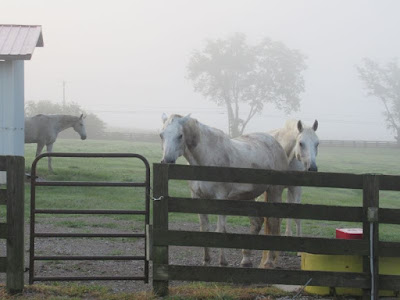 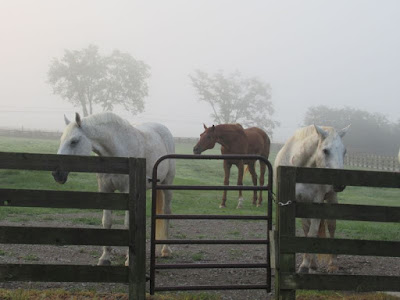 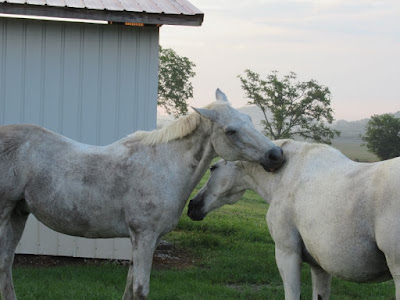 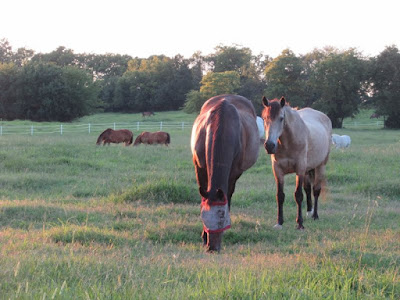 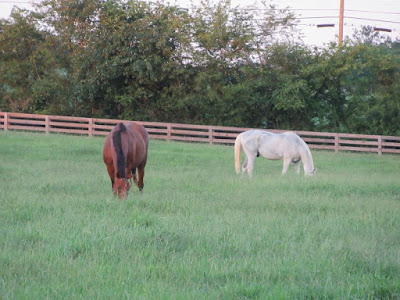 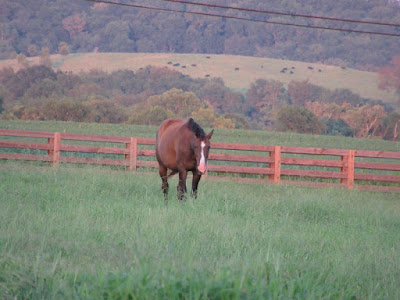 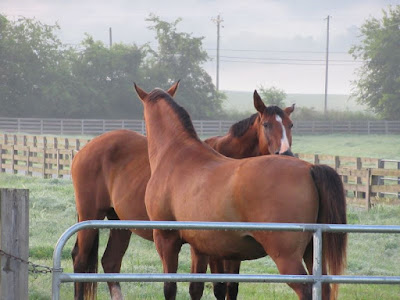 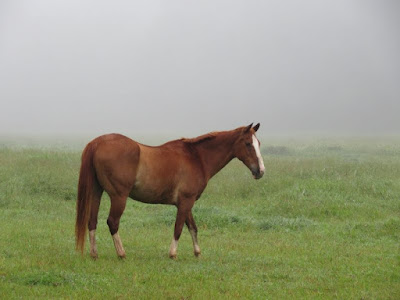 Posted by Melissa-ParadigmFarms at 5:31 PM