Jason and I were blessed to welcome two amazing new additions to our family this week. Lily and Norman made the trek from Northern Illinois early this week. Sometimes life seems to work itself out and the presence of Lily and Norman on our farm are a perfect example of this.

Lily checking out her new surroundings 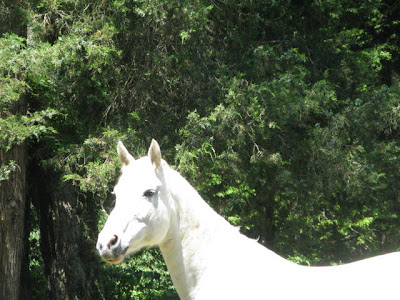 I don't think Norman knows where he is yet, he has yet to lift his head 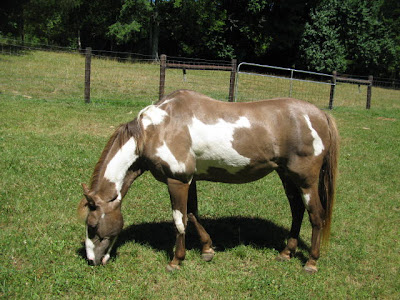 We maintain an active waiting list for Paradigm Farms. I try to go in order as best as I can when accommodating new horses, but this isn't always the way things work out. Herd dynamics are extremely important on our farm since most of the horses live outside in groups 24/7. Thus, when we have an opening I cannot necessarily go straight to the next horse on the list. I have to go to the next horse on the list that is the most likely to be a good fit with the pasture that has an opening.

Lily's reaction to the goats 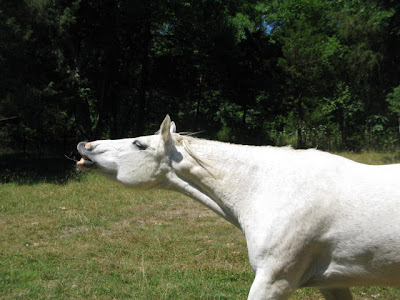 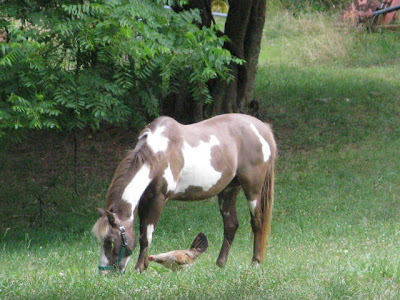 As you all know, I really struggled with Poco's passing a few months ago. I had been talking with Kate, who owns Lily and Norman, about the possibility of them retiring with us. My problem was a lack of space. I knew I would have one gelding leaving as he was here strictly for rehab purposes. (By the way we don't typically do that but his mom has another horse retired with us, we really like her, and we were able to make it work at the time although we could not right now.) This was going to allow me to make a couple of minor herd changes and free up some space in one of my pastures that houses mares and ponies. However I had already made a commitment to MyLight (whom everyone loves!) so one of those spaces was gone.

I need to get a good picture of Lily's hind end; it is all power. Look at how far she naturally steps under herself here, and this was a half-hearted canter. 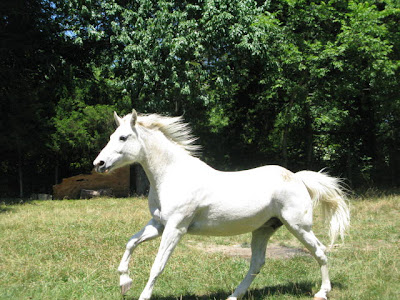 I made Jason pose with Norman so I could get a picture that didn't involve his head on the ground. Kate, check out his mane - Amy tackled it yesterday! 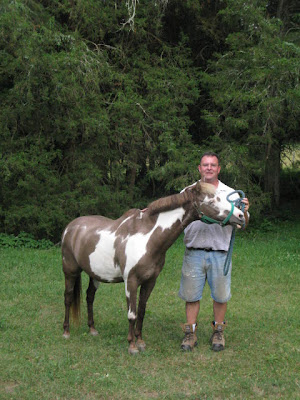 When Poco passed away that certainly left a hole in our hearts as well as a space in a pasture for a pony. To be honest at first I couldn't really think about it. Norman and Poco are so similar, they are both pinto ponies with larger than life personalities. As the saying goes time does heal everything, and after a few weeks I was really in love with the idea of having another pinto pony on the farm.

Lily does what I call her "morning runabout' when she goes out in the mornings. It only lasts a minute but I like to watch her. 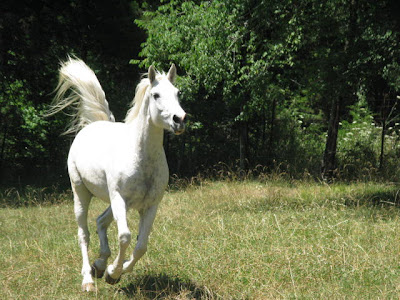 Who wouldn't want to hug this? Norman has to stand really tall to get his head over the stall door but he gets the job done. 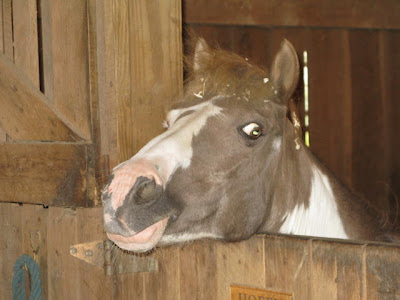 I am so glad that I called Kate and asked if she was still interested in sending Lily and Norman, we need both of them! I am hoping (and expecting from what Kate has told me) that Lily will take over the alpha role in her group. Buffy and Harmony currently rotate between themselves in that position. I get the sense that either of them would be happy to have a true leader come along and relieve them both of that burden! The fact that Lily is a beautiful mare with a great personality on the ground is an added bonus. And of course our world is now right again with another feisty, pinto who is 100% pony residing on the farm. Norman is just too cute with his champagne and white pinto markings, and he has that plucky pony personality which I happen to adore. Unlike Poco he also has wonderful ground manners - bonus! I know my vets and my farrier will be quite pleased by this improvement!

Lily is a Quarter Horse/Oldenburg cross who was ridden and shown by Kate's older daughter. Originally bought to be a hunter, apparently Lily made it known quickly that she did love to jump, but liked to do it big and with speed. I must say that Lily has an awesome hind on her that certainly shows why she was such a powerful jumper. Unfortunately Lily developed heaves a few years ago which is a progressive respiratory disease, and the strenuous exercise that would be required of a jumper wasn't possible anymore. Such a shame as Lily was and is perfectly sound. Some horses would be content to step down to teaching light duty lessons, trail riding, or some similar type of activity, but Lily's keen personality under tack didn't make her a good candidate for these things. As with many of the horses retired here their strengths as competitors work against them in other situations. Kate writes her own wonderful blog called A Year With Horses, and she does a much better job of telling Lily's story in this post.

Lily has her knees literally to her chin in both of these pictures. I like the expression of horse and rider in both pictures, calm determination. 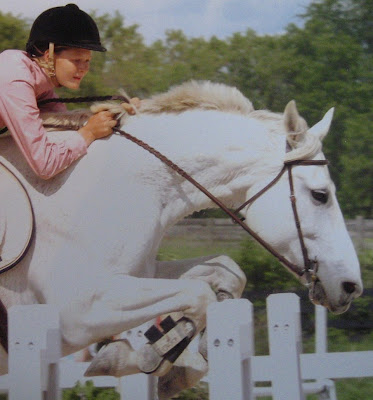 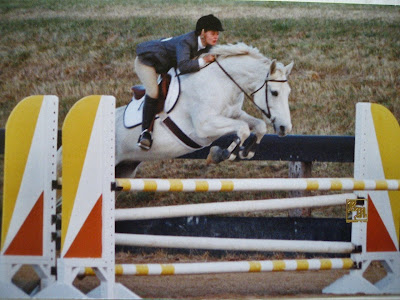 Norman has been in their family since 1998. Norman was purchased for Kate's younger daughter and she started showing him when she was seven years old and continued to ride and show him until she turned twelve, at which point she had physically outgrown him. Norman is only 12.2 hands which makes him a medium pony, but a very small medium pony. Although Norman has some arthritis in his hocks now I've still managed to see what a fancy mover he is, and the pictures certainly show that he had great form over the jumps! Norman carried his rider to a lot of wins including three year end championships in their final year of showing together.

I have managed to get on Norman's nerves as his first day here I kept hugging him because I just couldn't resist. Norman kept letting me know he didn't care for all of this hugging by nipping at me and I finally got the message and have ceased with the hugs! Norman has certainly channeled the same spirit that Cuffie has as he never lifts his head from the grass during his multiple, short grazing periods each day. Again, Kate tells Norman's story much more eloquently than I do in this blog post.
Even though he is just cantering over this little jump from a long spot he still has even knees while he takes care of his young rider. 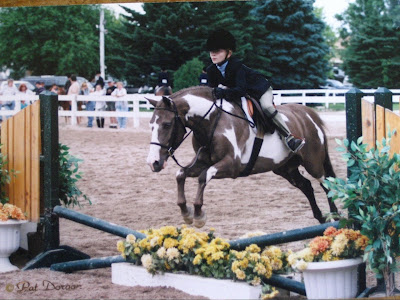 Norman shows excellent form over this jump - pony and rider are so CUTE! 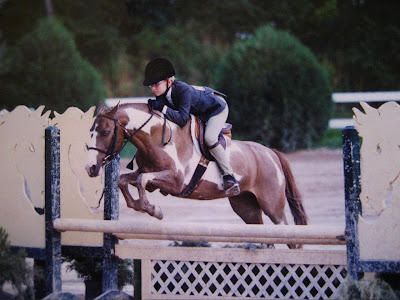 Welcome to the family Lily and Norman!
Posted by Melissa-ParadigmFarms at 9:32 PM

Oh my gosh, I miss them so much, and it is so good to see them happy in their new environment. I work at the stable where they came from in Illinois. Thanks so much for posting about them. I can see that they will receive excellent care with you.

It's a big relief to see them settling in so well - and they look much cleaner and better trimmed that when they were living with me!

They're both beautiful Melissa and what a nice post today. I know if I had my beloved animals retiring some place far away, I would want to know every detail on how they're settling in and what better way than through photos! I'm sure Kate will love this one! Luanne

Beautiful new arrivals! I am glad that there is another paint pony on your farm.

Sounds perfect for the both of them. Thank you for finding an opening in your farm and in turn for opening your heart to welcome them both.

Norman is too darn cute for words!