I am ready for this day to end, but I guess it is actually tomorrow since it is almost 2am right now. I had one of those days that had a lot of drama in it. Thankfully none involving Jason and I or the horses, or even the farm, but by the end of the day I was scared to answer my phone! Anyway, I tried to be a good friend and offer support to the people that needed it.

I was way behind on trying to get stuff done today and I didn't make it back into the house until about 8:30 tonight. I finally ate a meal, took a shower, tried to catch up on e-mail (I'm sure many of you reading this know that I didn't fully catch up!), etc. etc. At about 11:30pm I realized how late it was getting, (especially since that is past my bedtime) so I put my shoes on and headed over to the barn to do night check and put Mina and Jo, world's best fainting goats, in for the night.

I had walked maybe ten steps and I heard tires skidding and then a loud bumping noise. It sounded like someone had just had a wreck somewhere right by our farm. I really wanted to pretend I didn't hear it, but I did hear it, so I went inside and got my car keys to go investigate. I'm driving along the road not seeing anything and feeling relieved but then I found the cause of the noise, there was a car in the ditch. I pull over and find out if the person is ok (he was already out of the car) and he said he was. I then immediately asked about the fence, feeling hopeful since his car wasn't in the fence. This very polite teenage boy called me ma'am (I am NOT old enough to be a ma'am thankyouverymuch) and said I'm sorry ma'am but I did hit your fence. Great. He had sideswiped the fence.

I get out and investigate and two sections of the fence are demolished. In case anyone is wondering the sheriffs department would have made sure the fence was repaired in some fashion and not left it that way so no worries there if I hadn't heard it. Anyway, I saved them the trouble of having to track me down by beating them to the scene. Of course Jason happens to be away so I am stuck dealing with this damn fence - at midnight. (Excuse my language but I've been up for 19 hours at this point ok?) I was pretty cranky at this point so first I called the police to report the accident even though he said he'd already called.

Then I caved and called my Dad because I so did not want to have to deal with this by myself. He came and took a look around and we argued for a bit over the best way to deal with it before having the fence company out in the morning. I guess the one "good" thing about this is the driver's insurance company will have to pay for the fence to be repaired so at least Jason and I won't have to rebuild the fence ourselves. I finally won the argument as I said the easiest thing to do would be to get a couple of corral/round pen panels to put there. Very solid and not a lot of building involved. So we drive back to the equipment shed and load up a couple of panels in the back of the truck. Then I get the pleasure of riding in the bed of the truck with the panels so they wouldn't fall out, bumping across one of the pastures, while my dad drove. Of course they fell out once anyway, almost taking me with them, so we had to reload them and carry on again.

It was easy to actually set them up and secure them to the remaining fence posts once we actually got them over there. By then the poor kid's dad had arrived, the police had arrived to write up the report, and finally the tow truck came. I was really worried that the fence might get more damage as they pulled the car out of the ditch but thankfully that didn't happen, and at 1:30am the fence repairs and car extraction were done. I finally did my night check and put Mina and Jo in and here I sit, wide awake. I didn't even try to go to bed as I was just too awake. But I think I can sleep at this point. Awesome, I have to be up in four hours!! The wonderful farrier Gwen will be here tomorrow so I need to get an early start


I took this series of pictures yesterday. The geese (remember our goslings, they are really growing up) wandered through the big boys who were grazing around the pond. None of the horses even lifted their head. Trigger and Tony are in this picture. 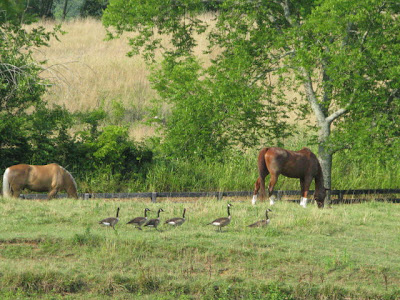 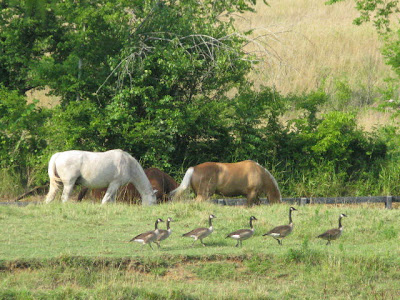 Dustin in front, Levendi and Leo in the back 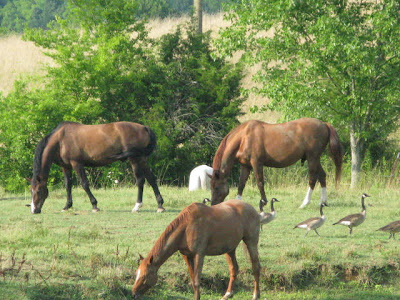 They could care less 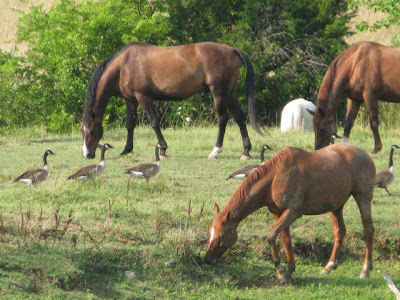 I had lots of help when I was dragging my arena this evening. Asterik is the one rolling and Sebastian and Faune are watching. 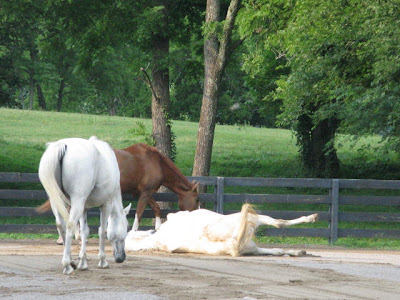 Winston, Trillion, Faune and Asterik; when I offered to reward their efforts to help me by riding them in the newly fluffed footing they left the arena - pronto! Imagine that! 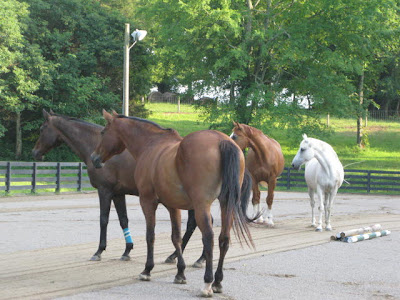 My niece Caroline rode along with me in the Kubota as well while I was dragging the arena. Like I said I had a lot of help. She kept pointing out to me the parts I had missed (I kept trying to explain that I could only get so close to the jumps). 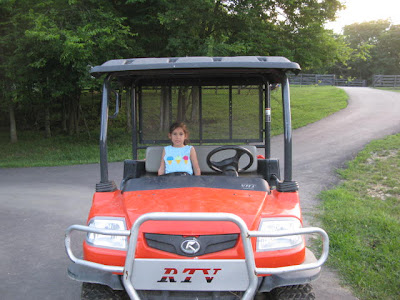 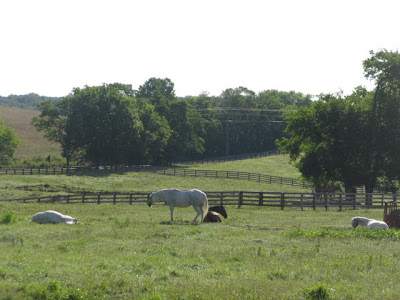 Front to back Apollo, Leo and Tony 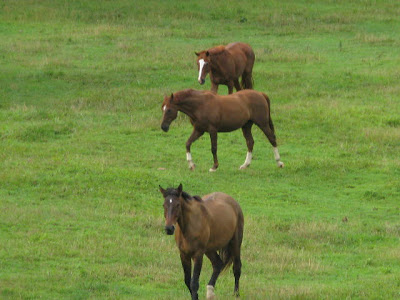 We joke that Norman is like the Visa commercial, "everywhere you want to be." I think it is Visa, maybe it is AmEx or Mastercard?? Anyway, Norman is wherever he wants to be these days and it is so cute! Asleep in his stall here with the door wide open, not the closed eyes. 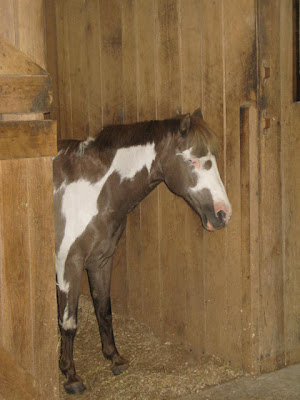 Looking out at me from his stall 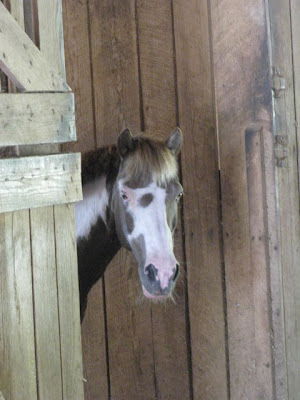 Mina joined him in his stall 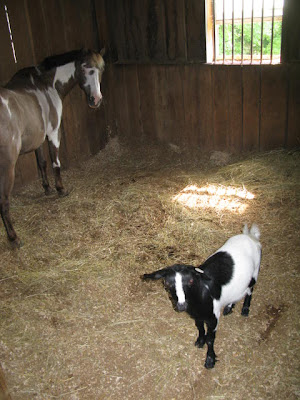 Chatting with Bonnie when I was untacking her after riding 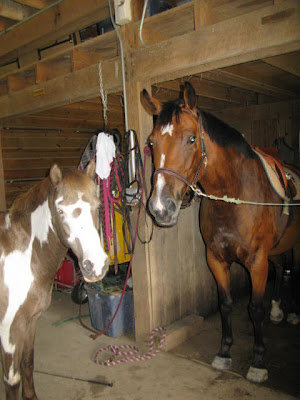 Grooming with Faune; Faune is a huge Selle Francais, 17.3 hands I think and Norman is a medium pony at 12.2 hands. Norman was really having to stretch to groom on Faune! 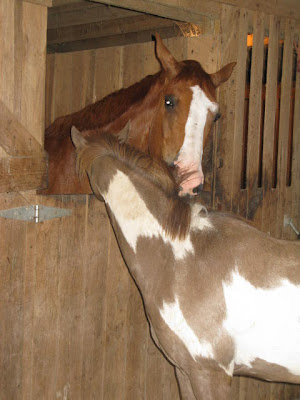 Posted by Melissa-ParadigmFarms at 1:39 AM

Ugh, sorry you had to go through that. I'm glad that everyone and everything was OK in the end. Any chance you'll be able to sneak in a nap today?

I'm glad that altough the wreck was a major hassle, that everyone was OK. Sounds like a nice kid. I'm especially glad the driver's insurance gets to take care of the damage. Love the pics of the horses... especially all in the ring watching you!!

We have had people crash into our fence on multiple occasions, and ALWAYS in the same spot. There is a VERY slight curve at the "crash spot" but not a huge curve that should cause problems for any driver. And the people crashing into our fence are not nice young men, they are usually drunks. UGH!

Can't you tell that is a sore spot with me?:)

OMG what a day! I've had those before and yes, it's always when hubby is gone! I love the photos with the little parade of goslings walking through the pasture! Fun! Hope today is a better one for you!

LOL Faune is still the biggest lovebug - he loves ponies. I always wanted to get him one :)

*hugs* and very glad that bad day is over!