I am so happy that today was the last round of teeth floating and sheath cleaning. We've had the dentist out four times over the last three weeks. She is a really nice person and we all enjoy having her out but I'm also glad to have that crossed off of my to-do list for awhile. I think what I like best about her as a dentist is she does not work in absolutes. She does not do just hand floating or just power floating, but instead uses whatever tools she feels will work best for each horse's needs. She also does not insist that the horses heads be held in a certain position. Some of the horses, like Sparky the donkey, are happiest just having their heads down towards the floor of the barn - of course the horses are all lightly sedated so their heads are droopy. However some of the horses don't like that and are happier to have something supporting their head and holding it up while she works.

Speaking of Sparky the donkey, it is always a challenge to do anything with him that involves a needle. Sparky is perfect for the farrier and politely puts his hooves on the hoof stand. He is excellent about having paste wormer administered, you don't even have to put a halter on him. He stands like a statue to have his blankets put on and taken off. However he hates needles. The only person that can hold Sparky while he is having his vaccinations, having blood drawn for his annual coggins, or while having an IV shot to be sedated for his annual float is Jason. Amy and I attempted to hold Sparky while he had his shot for sedation. He drug us out of the barn and across the driveway without even putting any effort into it. Amy and I (we each had a lead rope, and I had one with a chain on over his nose!) just skied along behind him, completely powerless to stop him, turn him, or do anything at all. I was beginning to wonder if he was ever going to stop for a couple of seconds! The dentist was laughing and said that Elvis had left the building.

I had to call Jason and have him come outside to help us. We had led Sparky back into the barn and he was getting ready to exit stage left again, but then he saw Jason. He immediately changed his entire body language and became much more cooperative. You could almost hear Sparky's thoughts: "Oh, it's that guy, I guess I am getting that awful shot after all." In case you are wondering, Sparky really likes Jason.

We had a weather shift over the weekend. We had had rain off and on for almost ten days, with Saturday being one of those days where it poured almost all day. However the rain finally moved out Saturday afternoon. We've had a lot of sunshine since then which has been very welcome. The temperatures also dropped from the mid 80's and have been in the mid 70's since Sunday. Even though everything was still wet on Sunday from the long rain shower on Saturday the humidity also dropped considerably as well. It is starting to feel like fall around here the last few days.

Tony lifting his head from grazing for a moment. Tony is a Dutch Warmblood and was one of the top amateur owner hunters in the country. 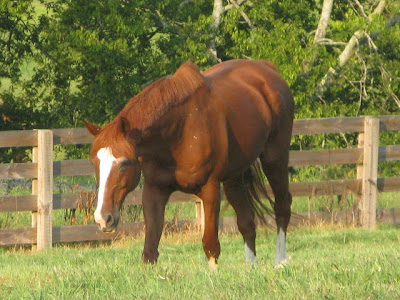 Sebastian, a Connemara/Irish Draught cross, hanging out in the shade with Bella the dog. 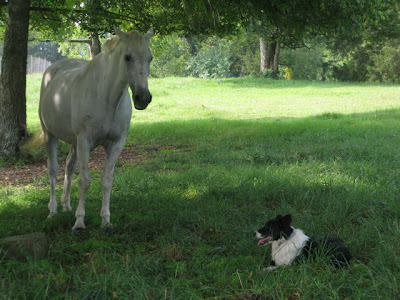 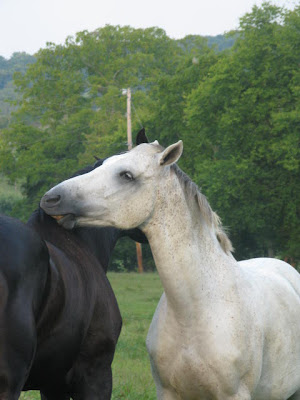 After grooming they grazed quietly together 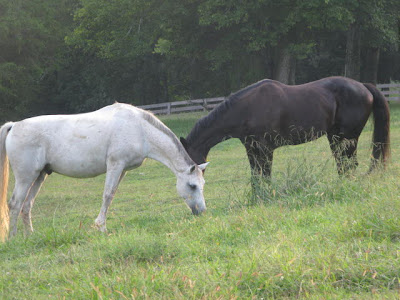 Something captured Chili's attention; he is 30 years old and I think he looks great 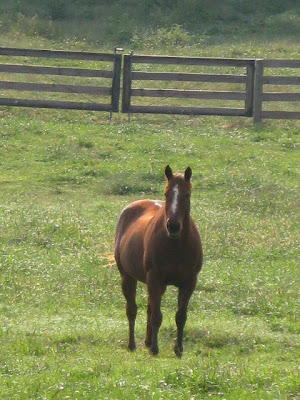 Trillion, Winston and B-Rad grazing together 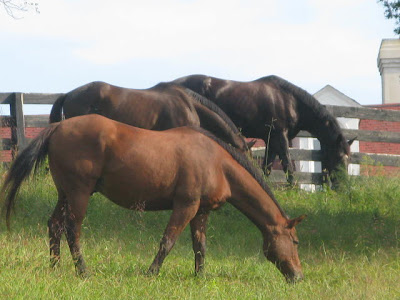 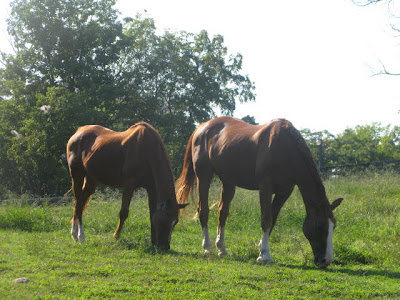 Snappy and Lightening; Snappy is another retired eventer who then had a winning career as a show hunter and Lightening was a trail horse 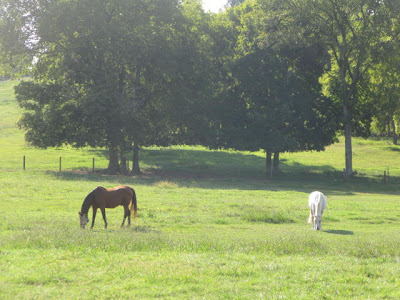 Lucky, Clay and Chili; all three were trail horses at one point while Clay also raced on the Quarter Horse circuit and Chili worked cattle 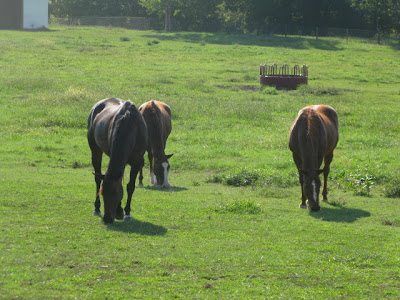 Clay, Teddy, Lightening and Slinky graze together with Baby and Trigger hanging out on the other side of the fence 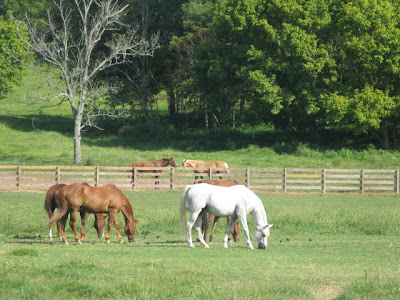 Aww, aren't donkeys adorable in 'that' way! Glad to see Sparky likes someone that he'll listen to as well.

We dread the dentist visits also. I would think the buzz from the sedation would be enough to look forward to it...LOL! Guess not!

Glad Sparky likes Jason enough to cooperate! Wonder how he got to be so worried about needles? Your dentist sounds excellent - I like equine professionals who pay attention to the needs of each horse rather than doing the "one-size-fits-all" thing.

Thanks as always for the peaceful pictures!

hey, your horses have a HIPPA agreement with you, don't they? you know, the medical confidentiality form?

cuz although you have several senior citizen horses, you haven't discussed their health issues (that i can recall). only their maintenance.

so, it's cool that you respect their privacy, but i am so curious!

i wish i knew if any of your horses were IR, or had Cushings, or even a tendency to colic. do all of them receive joint supplements or only some? do any receive nontraditional treatments for age related conditions? hrm.

these are things only their physicians and owners know, huh? heheheh