We welcomed back a familiar face recently. Grand, a thoroughbred jumper, rejoined us after some time away. Grand lived with us for some R&R and then was able to return to work. He is now back to join us for full retirement. Grand is a definite family member here. His "brother" Ivan has been retired with us for a few years. Grand and Ivan are very lucky to have a wonderful owner who takes amazing care of both of them. 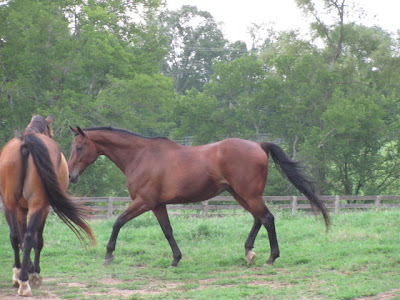 Grand already knows most of the Big Boys as he lived with them before. Grand himself is definitely a big boy at 17.2 hands. When we re-introduced Grand to the group it was extremely non-eventful. We were very curious to see how the introductions would unfold since Grand had lived with most of them before. There was not so much as a single squeal. There was a bit of nose sniffing accompanied by arched necks but that was it. We were especially curious to see how he and Ivan responded to each other. Grand and Ivan were turnout buddies for years when their owner had horse property so they have a long history together. Ivan definitely remembered Grand as he made a point of walking right over to him and having an extended nose sniffing session.

Ivan saying to Grand "hey, I know you!" 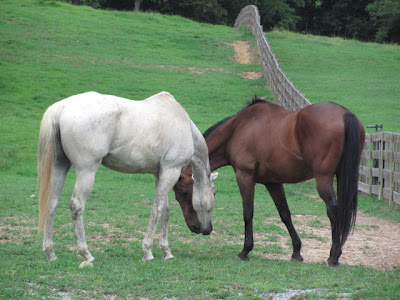 In my opinion Grand really epitomizes the thoroughbred sport horse. He looks like an athlete even when he is motionless. He had a lot of heart and also a lot of scope, which he demonstrated in his ability to jump high and wide. I'm told he also had an impressive buck that could send even the best of riders airborne when they weren't expecting it!

Grand showing off his good looks for the camera 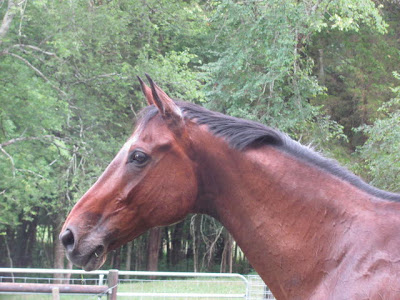 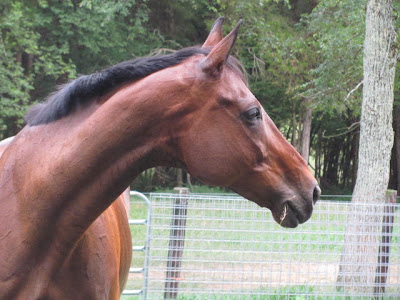 Grand is 18 now and ready to enjoy the good life. We already know that Grand fits in well here, and it is pretty much like he never left. He still enjoys a good run around the pasture but his favorite past time would be flirting with the mares over the fence. The mares find him quite enchanting, especially MyLight, and they all spend hours at the fence with each other grooming, squealing, and most often just standing there staring at each other.

Grand racing around the paddock 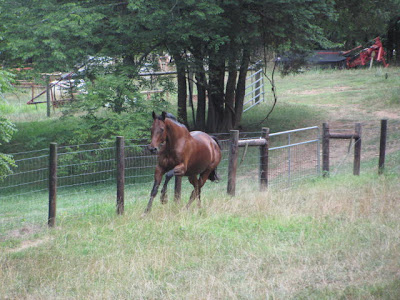 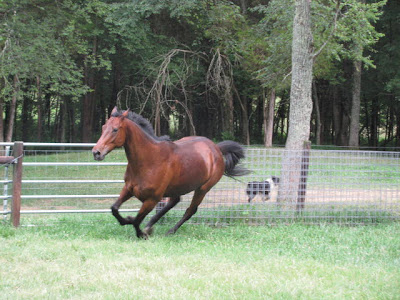 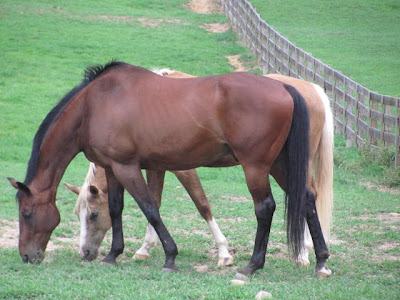 Posted by Melissa-ParadigmFarms at 8:41 PM

Oh wow, that third pic of him looks like a painting! He's a handsome boy. :)

What a beautiful boy - and a bay!

SQUEEEE! I love the classic profile of the TB. He sure is a handsome boy. Can't wait until I can afford a horse or at least be back in shape to go back to work on a farm.

What a big beautiful boy!

Amazing how they remember each other like that. I never would thought that, if it wasn't for your blog. Mind you, I haven't had my own horse since I was a kid. Still, not many people move horses away from a herd for a year or so and back again. Your farm provides such a unique environment and insight into horse behaviour, at least to me. Thanks for sharing.