Rampal is a Swedish Warmblood sired by the well known stallion Zorn. Rampal was born in Maine in 1985 and was trained and competed through the Intermediare I level in dressage in Maine. In 1996 Rampal was purchased by a new owner and he moved to the Cleveland, OH area. He remained with the same trainer in the Cleveland area until his retirement with us this past fall. With his new trainer in Cleveland Rampal successfully continued to move up the levels in dressage and ultimately competed at the Grand Prix level. At the same time he was competing through the Prix St. George level with his amateur owner.

At X halt, salute. Rampal and his mom in a Prix St. George dressage test 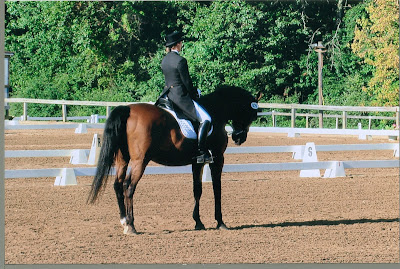 Rampal was eventually for sale again as his owner had become very involved in obedience training and trials with her dog. Rampal's mom had also been boarding and riding with the same trainer but at first it never even occurred to her to buy Rampal. She had another horse, Oskar, that she had shown through 3rd level dressage but was in the process of selling him as he had made it clear he did not enjoy being a dressage horse.

Rampal and his mom showing off some trot work in a Prix St. George test 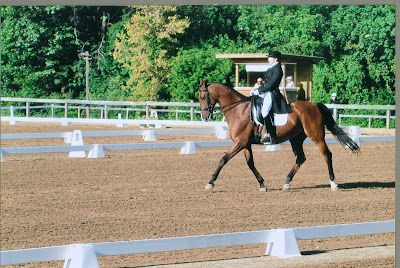 One day his mom was riding Oskar while her trainer was riding Rampal. Rampal was still for sale as he could be a tough ride. Rampal is extremely talented but one of those horses that gives you almost nothing unless you ride him correctly. Since he had been for sale several people had tried him but none had been able to ride him well. When they would ask him to canter he would just kick the walls of the arena until they asked him properly. That day while riding her horse Oskar while her trainer rode Rampal it struck her that she had to have Rampal - and she bought him! That was seven years ago. 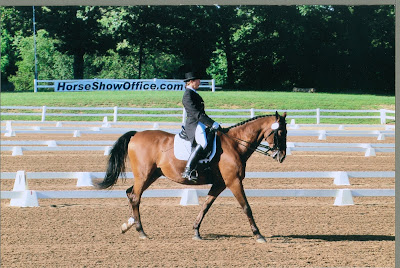 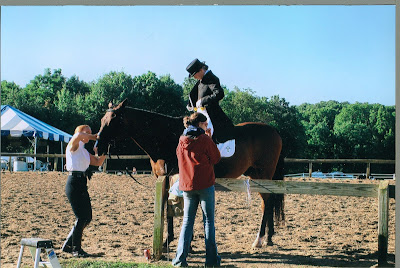 Rampal had a very impressive show record throughout his dressage career. He competed in an amazing 192 recognized dressage classes over an 18 year competitive career! And I would like to add that when his mom decided to retire him with us this past fall at age 25 he retired completely sound. She wanted to retire him sound and make sure he could have time to enjoy his retirement even though he could have kept going.

Rampal playing with Johnny; I see these two playing all the time 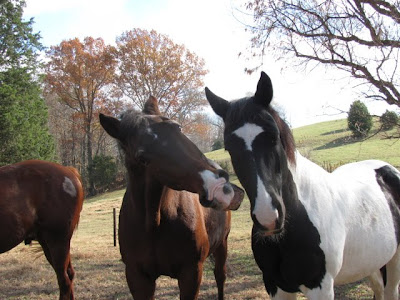 Rampal and Tiny having fun together; retirement definitely suits him! 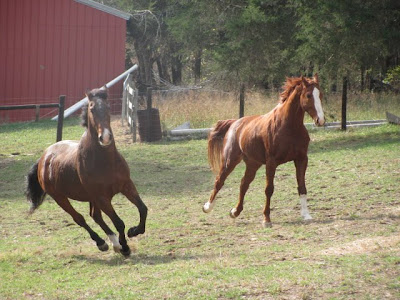 As his mom said Rampal is a very brave horse. Although you can make him mad at you she said she has never seen him scared of anything. One time when they were showing at the regional championships all of the winners were lined up in the indoor. Someone decided it would be a good idea to open a large sliding door that was behind all of the horses. The other seven horses panicked and proceeded to spin and bolt. Rampal just stood there stock still, watching them with an expression that said "what, you idiots have never seen or heard a door open?" I completely agree with his mom that Rampal was born before his time and would have been a great General's horse. Rampal would have been calm and cool on the battlefield with cannons blasting and bullets flying around, carrying his General around with dignity and composure. If given the opportunity he would probably prefer to just be the general and direct everyone on the battlefield!
Rampal on his second day with us 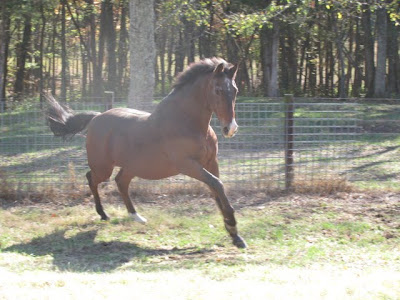 Rampal has been enjoying retirement with us for a few months now. After meeting him I never doubted that he would thoroughly enjoy retirement. He is very social and interactive with other horses and likes to play. What has surprised me is how deeply bonded he has become with his pasture mates. I thought that Rampal would be a bit too aloof and self composed to be a really emotional guy but deep down inside he is a sap! He is incredibly attached to his friends and gets very upset when any of his pasture mates are taken away from him for grooming, seeing the farrier, etc. I would have thought that as long as he wasn't the only one left behind he would be the type that would not even lift his head from grazing when someone went away for a little while but he has proved me wrong.

I hope you've enjoyed getting to know Rampal as much as we have!
Posted by Melissa-ParadigmFarms at 7:27 PM

I LOVE his white nose! Of course, I'm a sucker for a big snip on a bay horse, if you hadn't noticed. :)

I knew of this horse very well, he was always one of my favorite dressage horses! I have been wondering in your other recent posts whether it was the same horse, but I wasn't sure. Really cool that he's got a lovely place to retire!

What an absolutely fantastic story! His mom should be so proud. I'm so glad he's in your care, with horse friends and lovely pastures to play in. Thanks for making me smile with that story!

What a great story and fantastic horse! So smart and beautiful. He is the general!
I still chuckle about when I first heard, or rather "misheard" his name: Ron Paul.

Lucky horse with a wonderful owner! He seems full of personality, and how nice that he's sound and looking so good at age 25!

I love these posts!
I love your clients -- both the retirees and their moms!
It's just so lovely to see people do right by their horses.

What a wonderful story! I am glad that Rampal is with you and enjoying himself after a much deserved and illustrious career!