Off to the Races

Yesterday morning I was feeding the Big Boys.  It was a really gorgeous morning and I had gotten an extra early start.  For me there is something incredibly peaceful and soul refreshing about being outside with the horses early in the morning as the sun is rising.

The Big Boys were my last group for breakfast.  They were nowhere near the gate when I arrived so I fed other groups while they slowly filtered in from various points far off in their (very large) pasture.

When I was ready to feed them the last couple of stragglers were meandering up to the gate.  As I distributed feedbags I realized I still had Moe's feedbag in my hand. I looked around and didn't see him which is pretty unusual.  Moe is highly food motivated and does not miss meals.

I started calling him assuming he would show up any moment.  He didn't come.  The boys were finishing up so I removed all of their feedbags and started hiking over hill and dale in search of Moe with his feedbag in tow.  I finally found him way out in the pasture.  He was facing away from me.  I called and called his name and he never even lifted his head and just kept his face stuffed in the grass.

I kept thinking surely he would hear me and realize he was missing breakfast but he never turned around or otherwise acknowledged that he was aware of my presence.  Finally when I was maybe 20 feet away I said "hey Moe, do you want to eat breakfast or not?"  He finally lifted his head and looked behind him to see who was talking.

At that moment he realized he was alone.  I guess he was so intent on his grazing he never realized the others had left, but he realized it then.  He was off like a racehorse out of the gate, galloping and frantically screaming to the others.  He whipped past me without giving me a second glance.  And there I stood in the same situation I had been in before, Moe's feedbag and no Moe, except now I was at the opposite end of the (very large) pasture.

I hiked back to the gate where Moe was with the others.  He had reached the gate in about 5 seconds but it took me a bit longer than that.  I walked up to Moe and he shoved his head in his feedbag with an expression of "where have you been? I'm here at the gate and everyone else has already eaten."

I sighed in exasperation and rolled my eyes at him but I think all of that was lost on Moe.  He was too busy eating, probably wondering what a horse had to do to get service at this place.﻿

Clayton and Rampal grooming each other with Johnny grazing 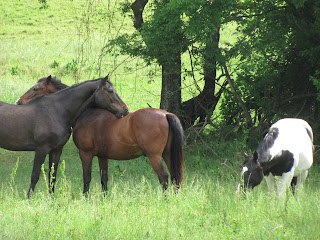 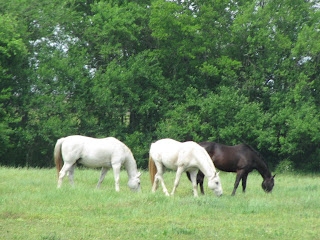 a wild turkey showing off 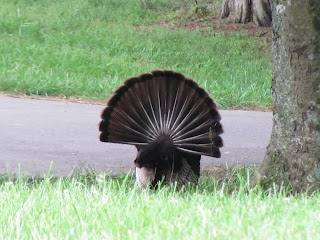 starting to fold up﻿ 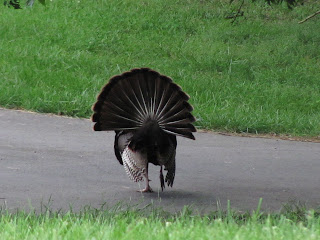 and back to his usual very unattractive self﻿ 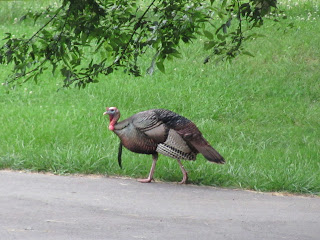 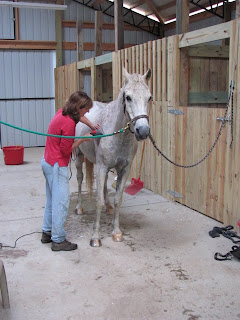 Cuffie wasn't a whole lot happier; "maybe I can escape this way"
﻿ 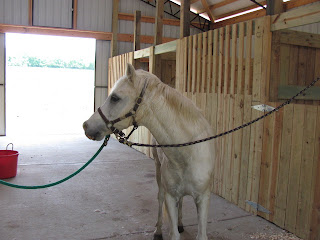 "or maybe this way"﻿ 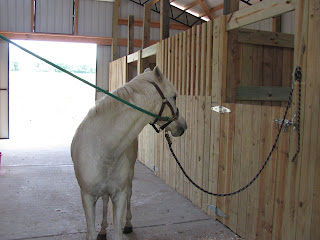 Cuffie with his mane flying as he took off to rejoin his friends; I did a terrible job on him as I made the mistake of trying to clip two horses with one set of sharp blades.  I needed two.  Unfortunately for Cuffie it means he will have to endure more clipping so I can clean him up after I get all of my clipper blades sharpened.  I'm sure he will be thrilled.﻿ 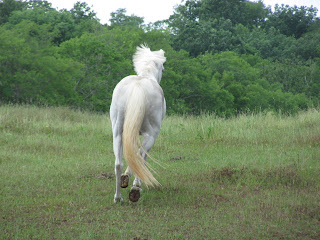 Gus and George grooming each other 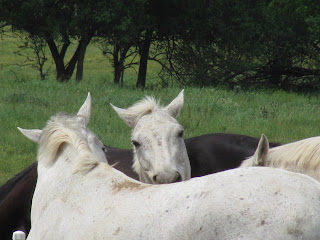 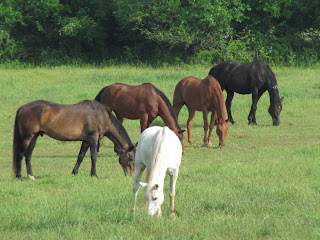 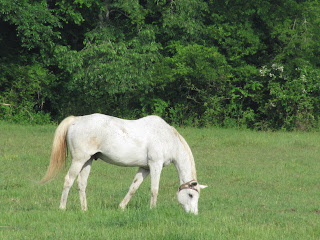 Posted by Melissa-ParadigmFarms at 9:28 PM

I loved this story! And I think I love Moe!

Well, at least you got a good story out of it all.