Today was one of those crazy weather days that is so typical of winter in middle Tennessee. The day started off with rain. Although I am not a fan of getting wet it did not start off too bad. The rain was light and the temperature was very reasonable.  It was almost 60 degrees at 8am this morning and it seemed overkill to have sheets on the horses.

I was in the middle of soaking feed as part of breakfast preparations when the light rain changed almost instantly to a thunderstorm and heavy rain. This did not make me very happy. I had on my GoreTex raincoat and rubber boots, but did not bother putting rain pants over my jeans since the rain had been so light. In about 30 seconds I was regretting that choice as my jeans got soaked. I don't know anyone who enjoys traipsing around in wet pants.  There wasn't much to do except complain, and I covered that base thoroughly although no one was around to hear me, and carry on with feeding. The heavy rain lasted just long enough to make sure my pants were soaked and then stopped. How irritating is that?!

At first I was thinking it had been a mistake to have sheets on everyone.  However the weather forecasters actually got the forecast right and the temperature dropped like a rock, down to the mid 40's, after peaking in the morning. The horses were quite happy to be dry under their sheets once the cold front began moving through.

When the temperature dropped the rain tapered off and the wind moved in. Oh my gosh did the wind move in. It was making the horses wild, which made them oh so much fun to feed in the afternoon.  The wind gusts were quite impressive.  At one point I was simply walking down the driveway from one pasture to the next, and a gust of wind hit me so hard I was suddenly two feet over to the right from where I had been. Thankfully I remained upright.  A few minutes later I wasn't so lucky. Another big wind gust came along and the gate I happened to be closing got away from me despite my valiant effort to hold on, and proceeded to slam into me with such force that I fell over. I said some really ugly things, again to no one in particular (maybe the universe in general?), since Jason was about 60 acres away in a different pasture.  The best part was I fell on my butt on the wet ground. The only thing worse than wet jeans is having the seat of your pants be wet.

There were other weather related incidents today in which I screamed to no one. Such as when the leadrope flew back and hit me in the face, or when I was dumping a hay cube mash bucket for one of the horses and smashed my finger when I lost my grip on the wet bucket (I gotta say smashed fingers hurt).  At the end of the day I don't know who had more marks in the crazy column, me or the weather. All I do know is that crazy weather seems to lead to me ranting and raving repeatedly to no one all day long. If someone were videoing me with a hidden camera I have no doubt that I would be mortified watching myself. "Look at that crazy girl with the wet, dirty pants screaming profusely at no one!  Oh look, she's doing it again!"

The good news is our cold snap is moving out quickly and we will be back in the mid 60's by Friday. This schizophrenic weather is standard winter weather for middle Tennessee. However as far as I am concerned spring has arrived now that it is March. Our forecast agrees and after tomorrow we are 60's and higher with lots of sunshine mixed in for the rest of our forecast. That sounds good to me! 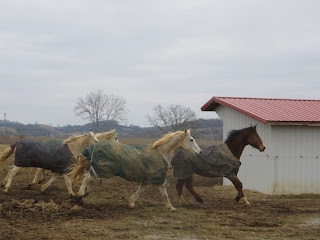 Lotus and Romeo went for another lap 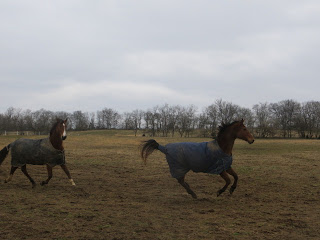 Lotus, Gus, Romeo, Asterik and George were still going and going, like the Energizer Bunny 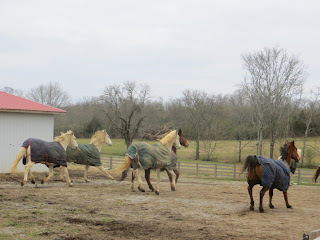 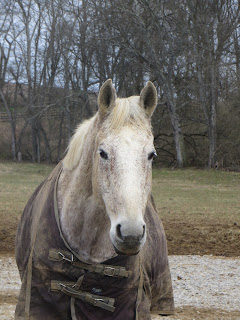 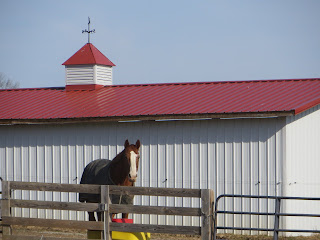 Chance was exhausted, no doubt from being a wild thing most of the day 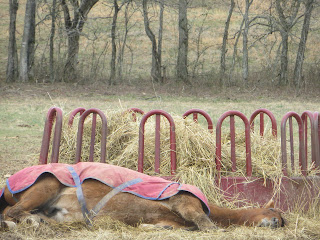 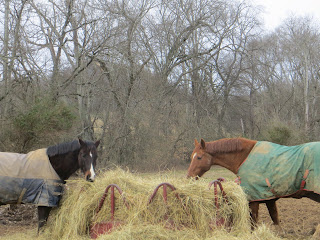 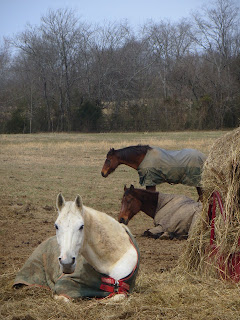 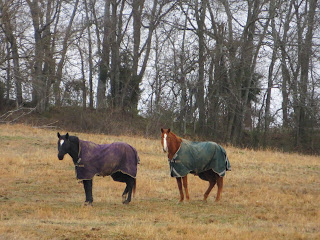 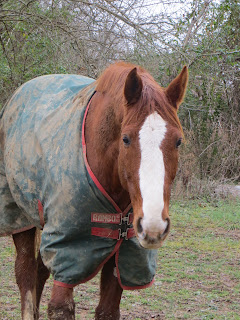 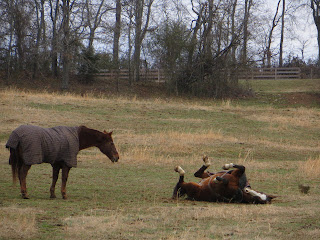 Apart from driving you crazy, it seems the horses had a great time!

Yesterday sucked. Pretty much everything about it!