We seem to have entered this streak for the last several months where, as the saying goes, if we did not have bad luck we would have no luck at all.  This past weekend our crisis involved one of the World's Cutest Fainting Goats.  Mina, who strongly prefers to be called Mina the Czarina, broke her right hind leg over the weekend. We have no idea how this happened but we did not need a vet to tell us that her leg was broken. The odd angle at which it was hanging was all that was needed.

Mina the Czarina was transported to the vet clinic so we could determine if this was a break that had a chance at healing. The break is right at the hock joint, and although it has a very good chance at healing her leg will lose a lot of the range of motion around the hock. Mina was put under sedation, her leg was splinted, and she remained at the vet clinic overnight. At her midnight check all was well, but sometime between then and her early morning check Mina had managed to chew off her splint.  Mina the Czarina had the opportunity to be put under sedation for a second time so her leg could be resplinted. Her splint is quite complex and had to be made for her by the vet. Since this was neither cheap nor easy, Mina is also now wearing the Cone of Shame to prevent another attempt at splint removal.

We were given the ok to bring Mina home from the clinic yesterday afternoon. About the only part of this entire ordeal that Mina has approved of was her transportation home from the clinic. My mom very graciously allowed Mina to be transported in the back of her Mercedes. How many goats can say they have been chauffeured in a Mercedes? Mina the Czarina approved of this arrangement.

Mina is now home and on a minimum of 4 weeks of stall rest or confinement to a very tiny paddock, about the size of a stall. Her main complications at this point would be infection in the leg, or a stress related injury to her good hind leg which is now having to take all of her weight.   The vet has instructed Mina to cut down on her intake of Mrs. Pastures cookies and lose some weight to help prevent injury to her good leg.

We have done all we can to give Mina a chance at healing, now we have to wait and hope for the best for one of the World's Cutest Fainting Goats.

Mina showing off her splint and the Cone of Shame 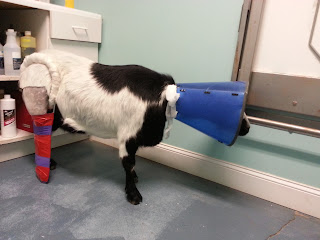 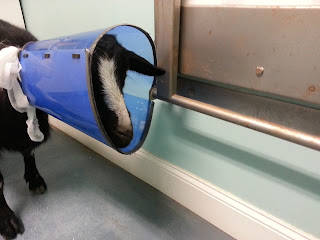 Mina being transported as if she were livestock in the back of the Kubota; the humiliation of it all was almost unbearable. 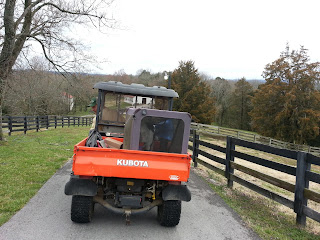 I could not get a picture of Mina in the Mercedes as I was too busy helping to heft her in and out. Mina is many things, but a lightweight is not one of them. 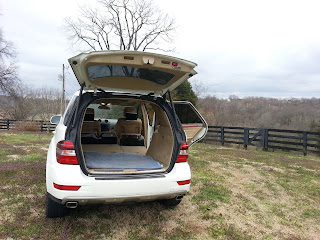 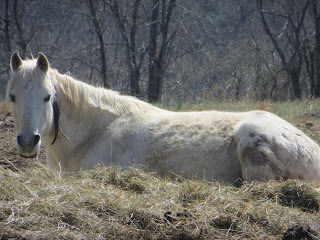 . . . he was napping in the hay with MyLight and Calimba at the hay feeder; Cuffie was hard asleep nearby 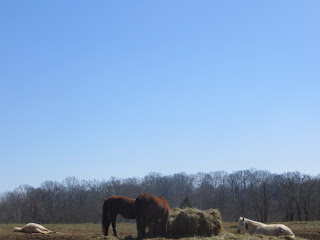 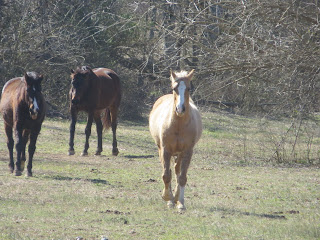 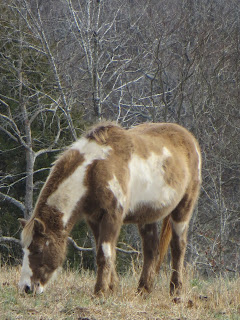 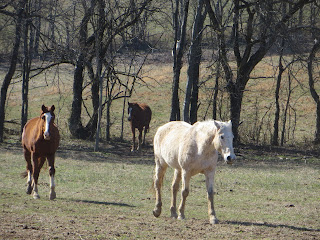 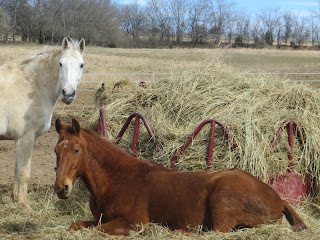 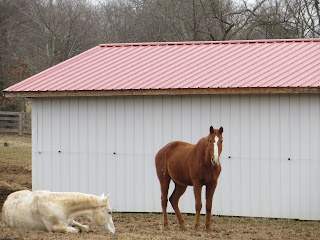 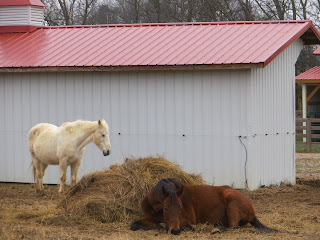 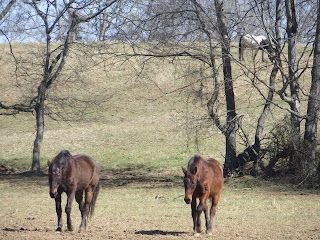 Posted by Melissa-ParadigmFarms at 9:59 PM

Email ThisBlogThis!Share to TwitterShare to FacebookShare to Pinterest
Labels: goats

Oh, poor Mina! That is quite the intricate looking splint...and the goat collar of shame is merciless! I hope she is a good girl and complies with her rest period without giving you too much grief. Though I'm not sure what she will think of life without Mrs. Pastures cookies ;-) I was glad to see the mercedes is a van, although my mental image was pretty comical!

Was Norman always so brown?
Or is he getting better at rolling?
;)

What an ordeal! I sure hope this all ends up well for Mina. You two are great parents!

Oh noooo! Many goat kisses from me for Mina to heal quickly and well! She is a naughty goat for chewing her splint...but I'd do that too. heh heh heh

Glad the vet was able to fix her up and hope she heals well.

DId the other 2 faint when they saw her cone of shame?
That poor girl! Hope she heals fast.