Stepping Up To The Plate

As I mentioned in my last post no one was stepping up to the plate and fulfilling expected roles. We had a major snow event on the way and everyone was trying to sleep through it. No State of Emergency from TEMA, Giles County hadn't closed the schools, Jason forgot to take the battery out of the tractor. It was like everyone forgot we were still living in the south. I realize we have had a decidedly un-southern winter but come on everyone, we all have roles and responsibilities here!!

Shortly after I published the blog post on Tuesday evening Giles County was the first to step up to the plate. They announced that the schools would be closed on Wednesday. OK, things were starting to feel more normal. Snow was predicted (yes predicted, not actually happening) and schools were closed.  All right, now it was starting to feel like I was living on the right planet again.

However TEMA was still asleep at the wheel. We had a snowstorm predicted and we were hearing crickets from them. Are we not supposed to be declared in a State of Emergency when faced with the possibility of snow? It was really bothering me. I have to give a shout out to my friend Sheila who let me know that finally TEMA got with the program and announced that Tennessee was in a State of Emergency mid-morning on Wednesday. At that point I relaxed considerably, things really were getting back to normal.

On the other hand our weather forecasters, as usual, had everything pretty much wrong. We had been hearing for days that it was going to start snowing by 6am Wednesday morning and keep snowing through the evening. We were supposed to have inches of accumulation. We haven't had snow to play in for three years so I was actually looking forward to the snow. So you can imagine how disappointed I was when 6am came and went with  no snow. Then 7am came and went with snow, as did 8am, 9am, 10am, 11am, noon . . . you get the picture here.

At about 2pm it finally started to snow. It had stopped snowing by about 6pm. If we are generous we had maybe a half inch of accumulation of snow (about 1.2cm for my Canadian friends).  As I walked along our driveway at 6:30am this morning it was bare and dry for almost the full mile with a few exceptions in the shaded areas. The high today was in the upper 40's, by noon the snow was gone. I ran around frantically taking pictures this morning, desperately trying to get some snow pictures of the horses before it all melted.

The best part of the morning was the exchange Jason and I had regarding Carter going to his daycare today, it was a true North vs. South exchange.  Carter goes to daycare three days per week for a half day and today would normally have been one of those days. I told  Jason to get Carter dressed in his Carrhart overalls and coat. With a puzzled look he asked "why?"

Me: Well he isn't going to go to daycare this morning

Jason: (very puzzled and confused) Why?

Jason: But our driveway is bare and dry, so is the road (still sounding puzzled and confused)

Me:  I know that BUT IT SNOWED (said in a voice that was starting to get irritated)

Jason;  (getting frustrated) I KNOW IT SNOWED but what does that have to do with going to daycare?

Me:  He'll be there by himself. No one will be there.

Me:  BECAUSE IT SNOWED. HOW MANY TIMES MUST I SAY THIS?

Jason: But the roads are fine. People still have to go to work, he won't be there by himself.

Jason: (sounding like a broken record at this point) But why??

We finally called Carter's daycare and, exactly as I said, no one was there. They said we could bring Carter if we wanted but he would be there by himself.  Poor Canadian Jason is still trying to understand this hours later as I type. I am pretty sure he is still muttering "but the roads are fine."

And so winter goes in the south. 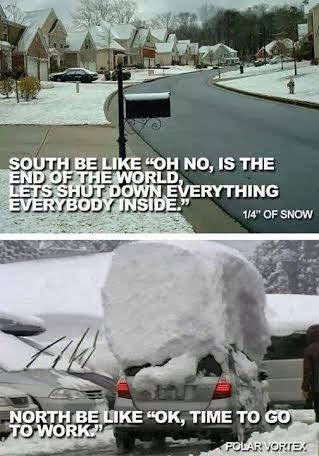 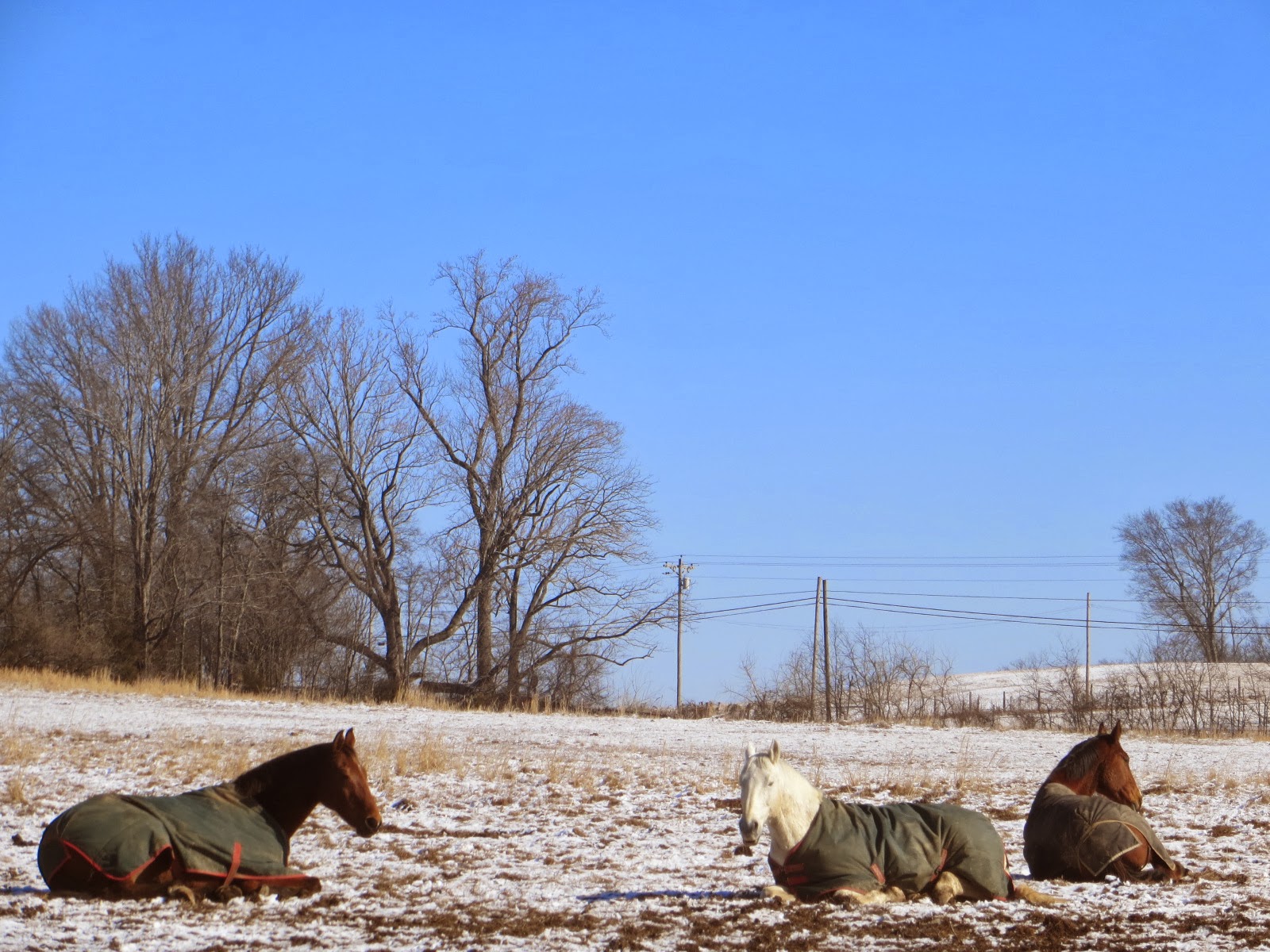 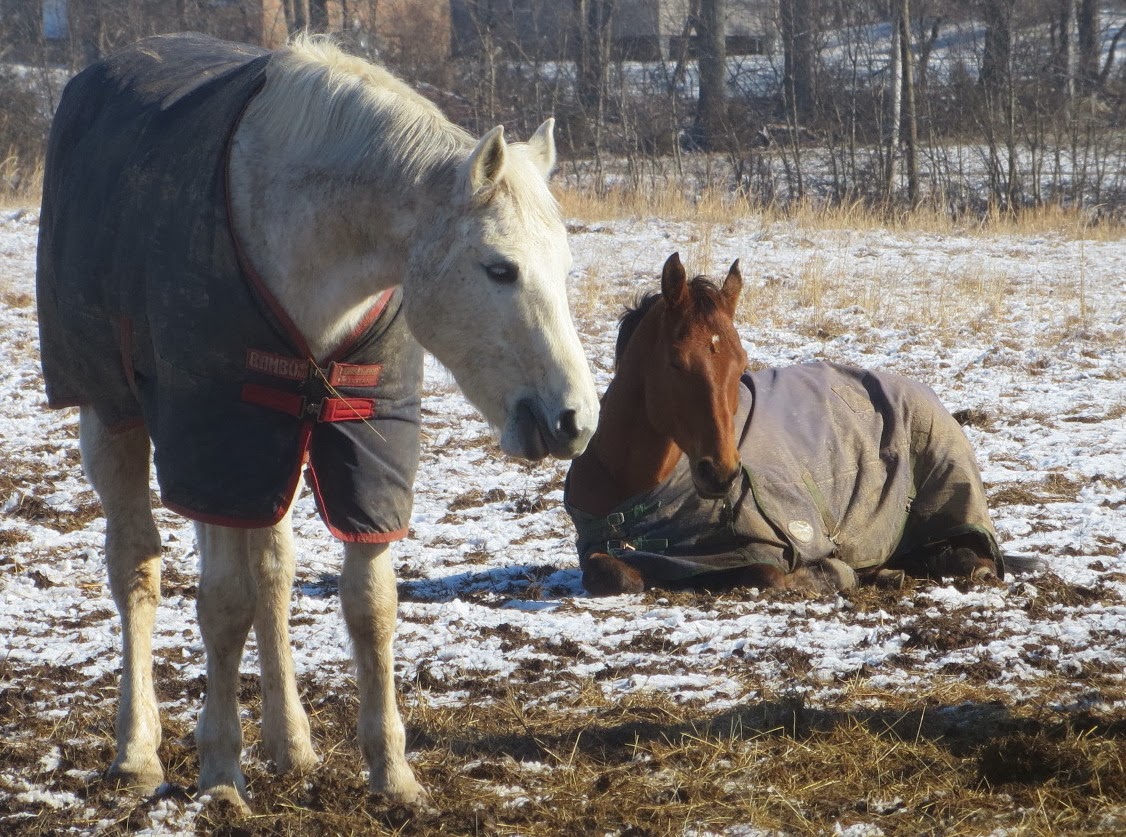 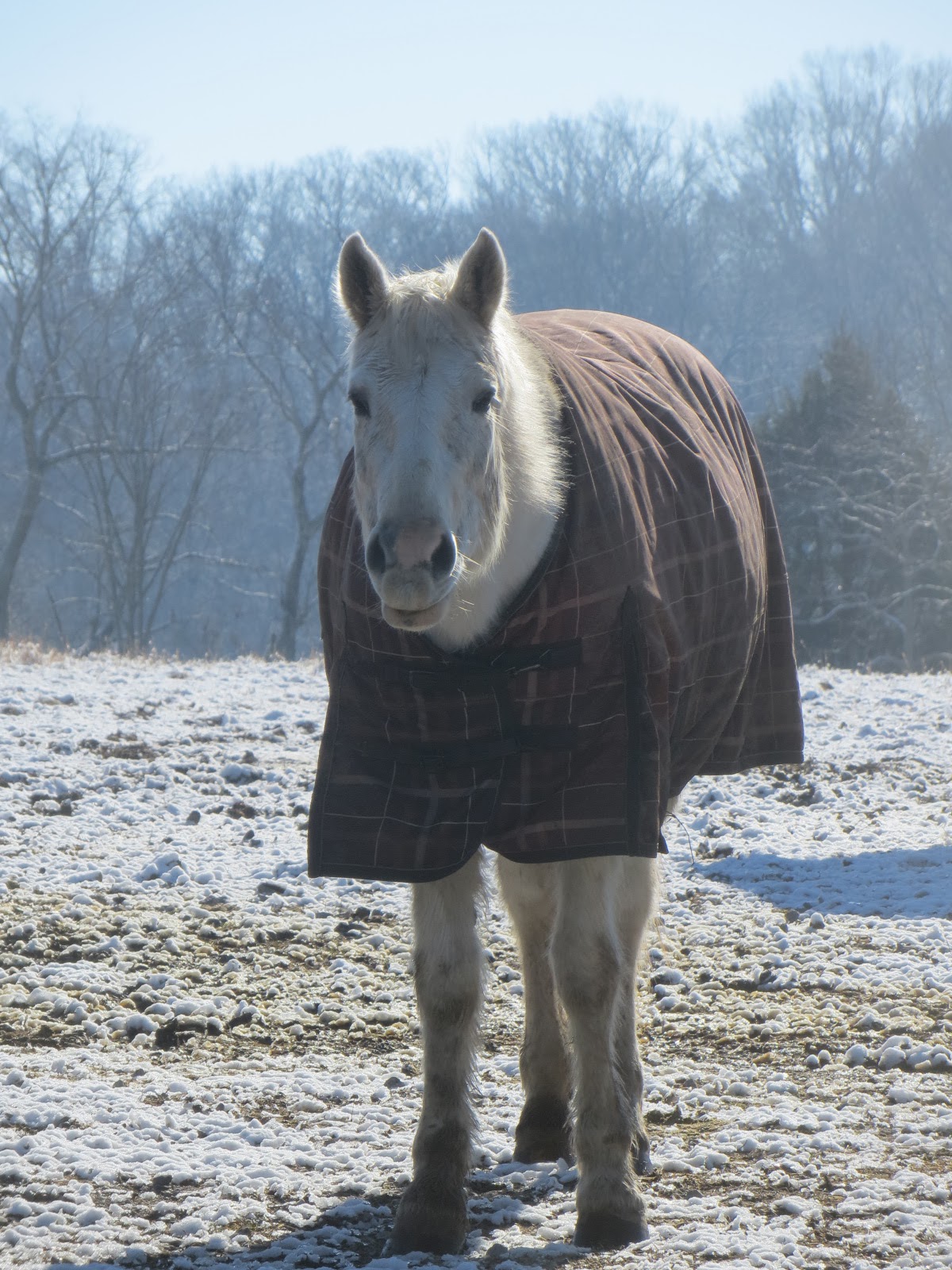 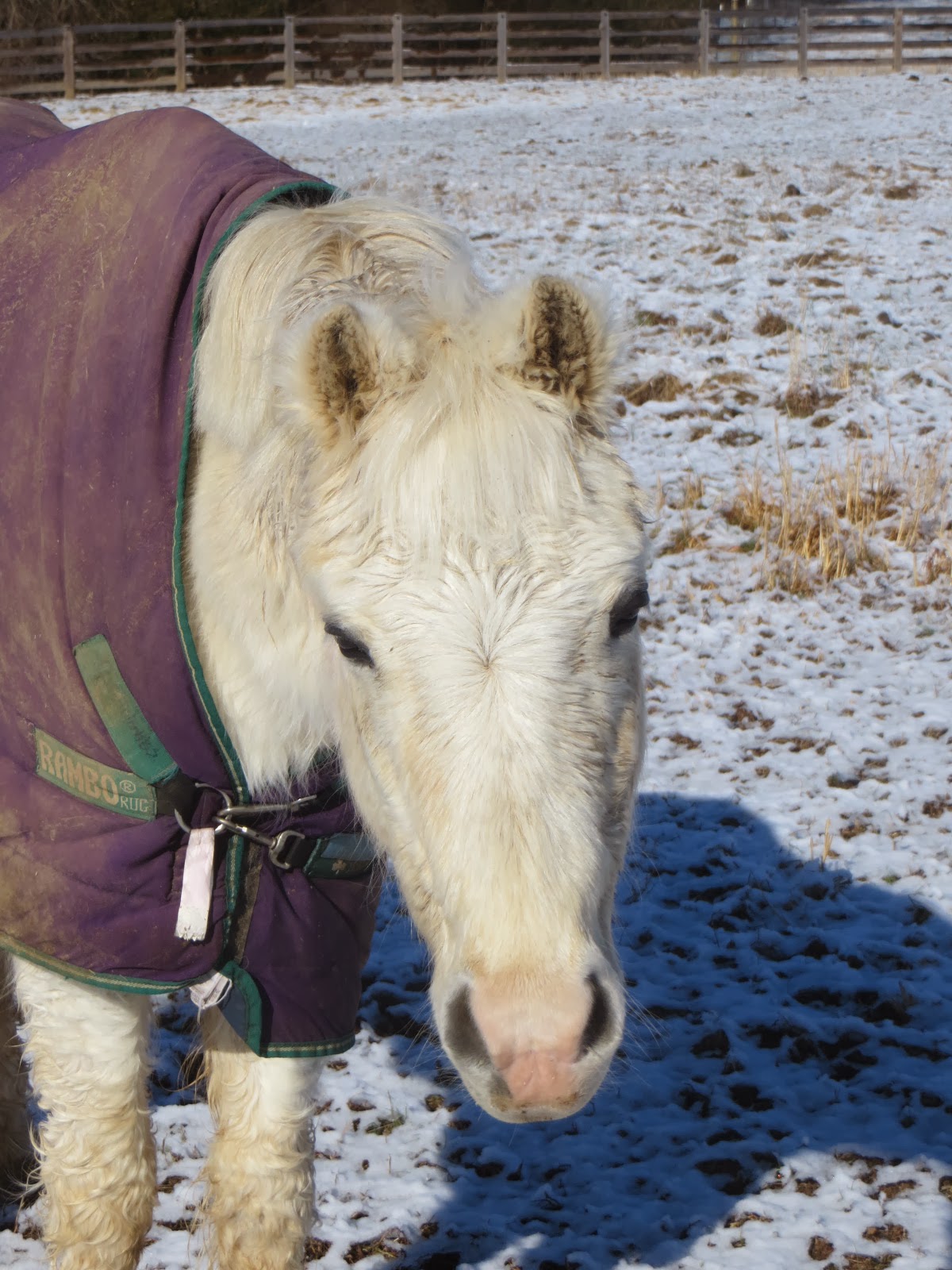 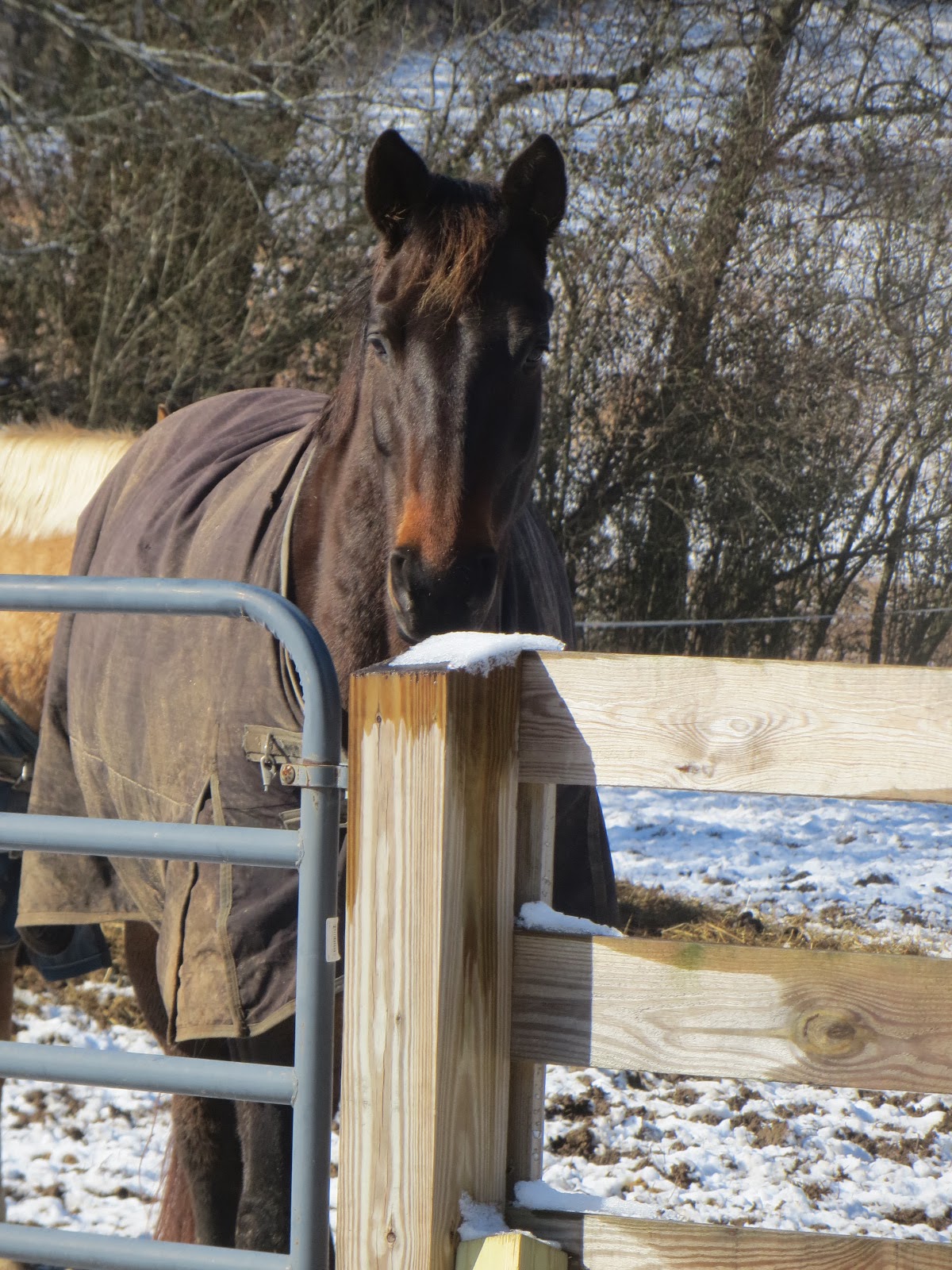 Johnny braved it in the snow without a blanket 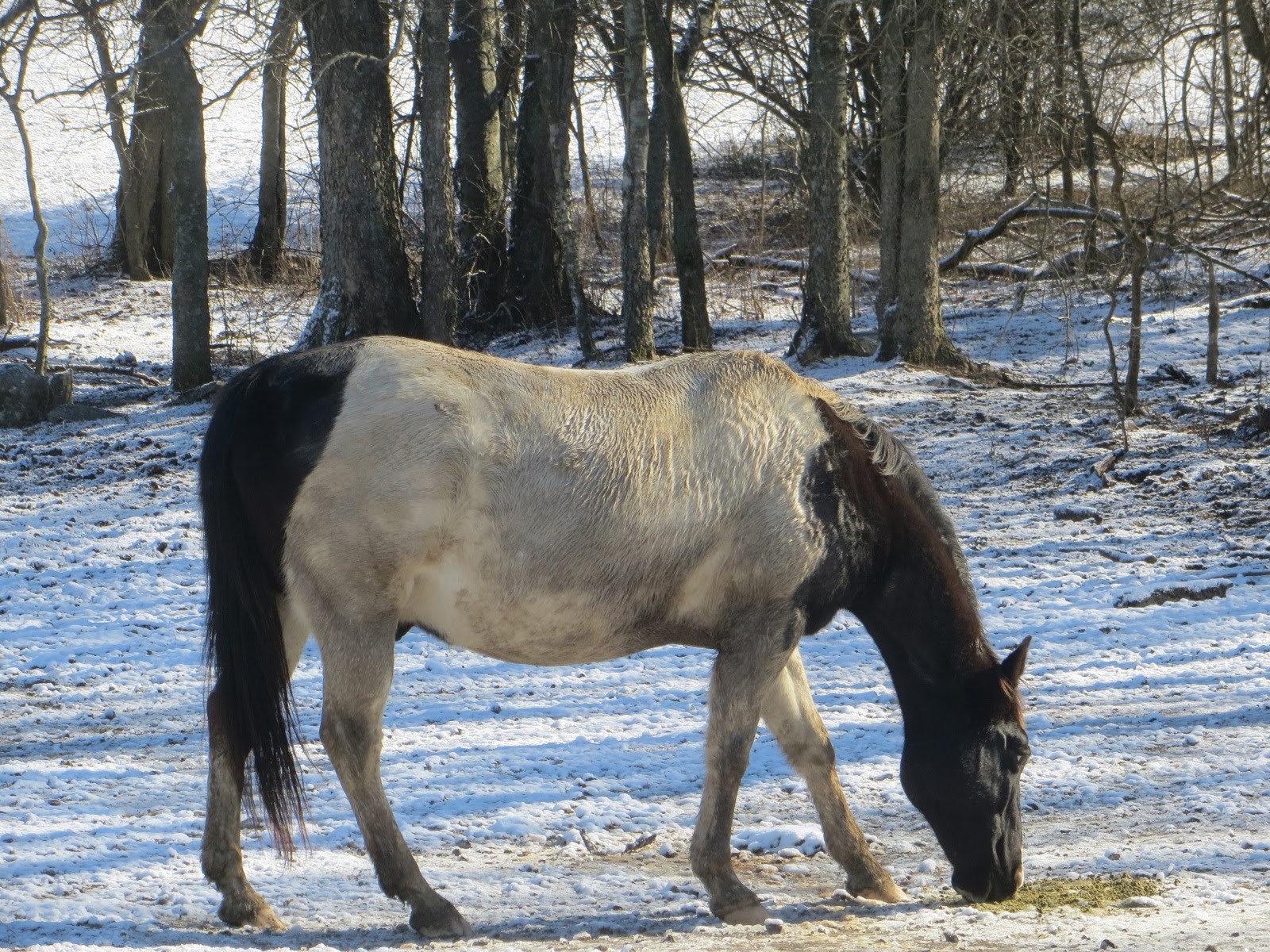 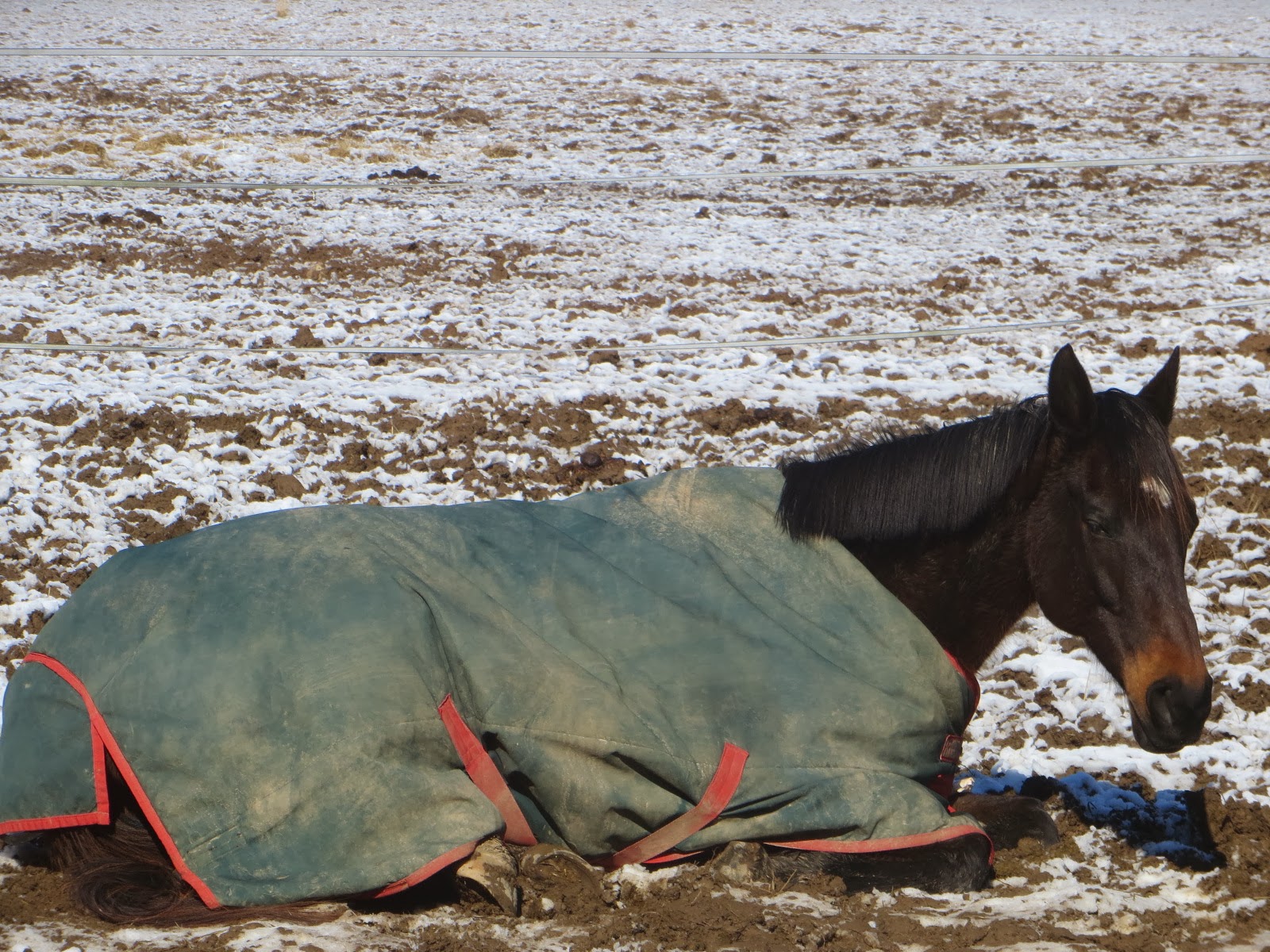 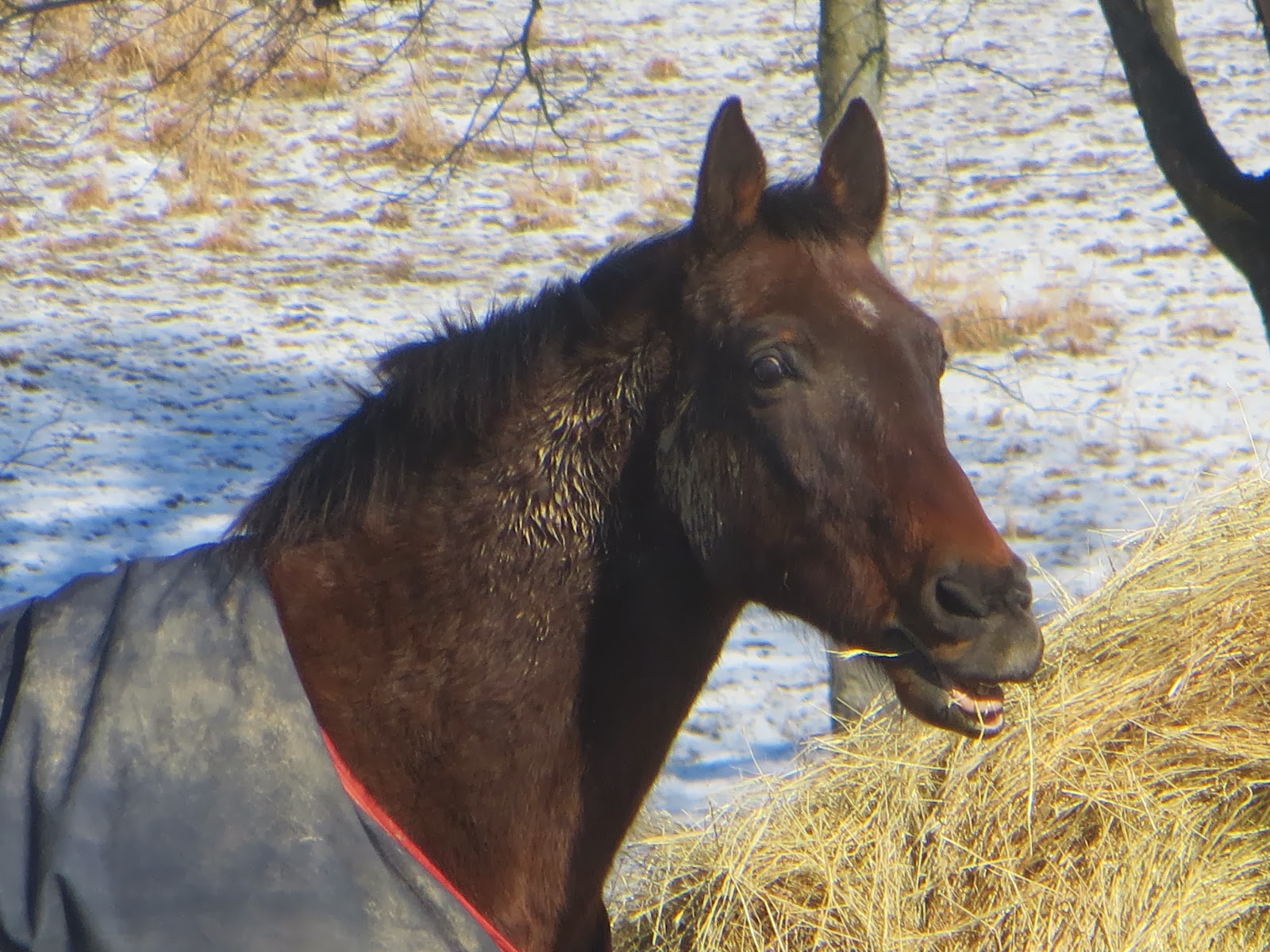 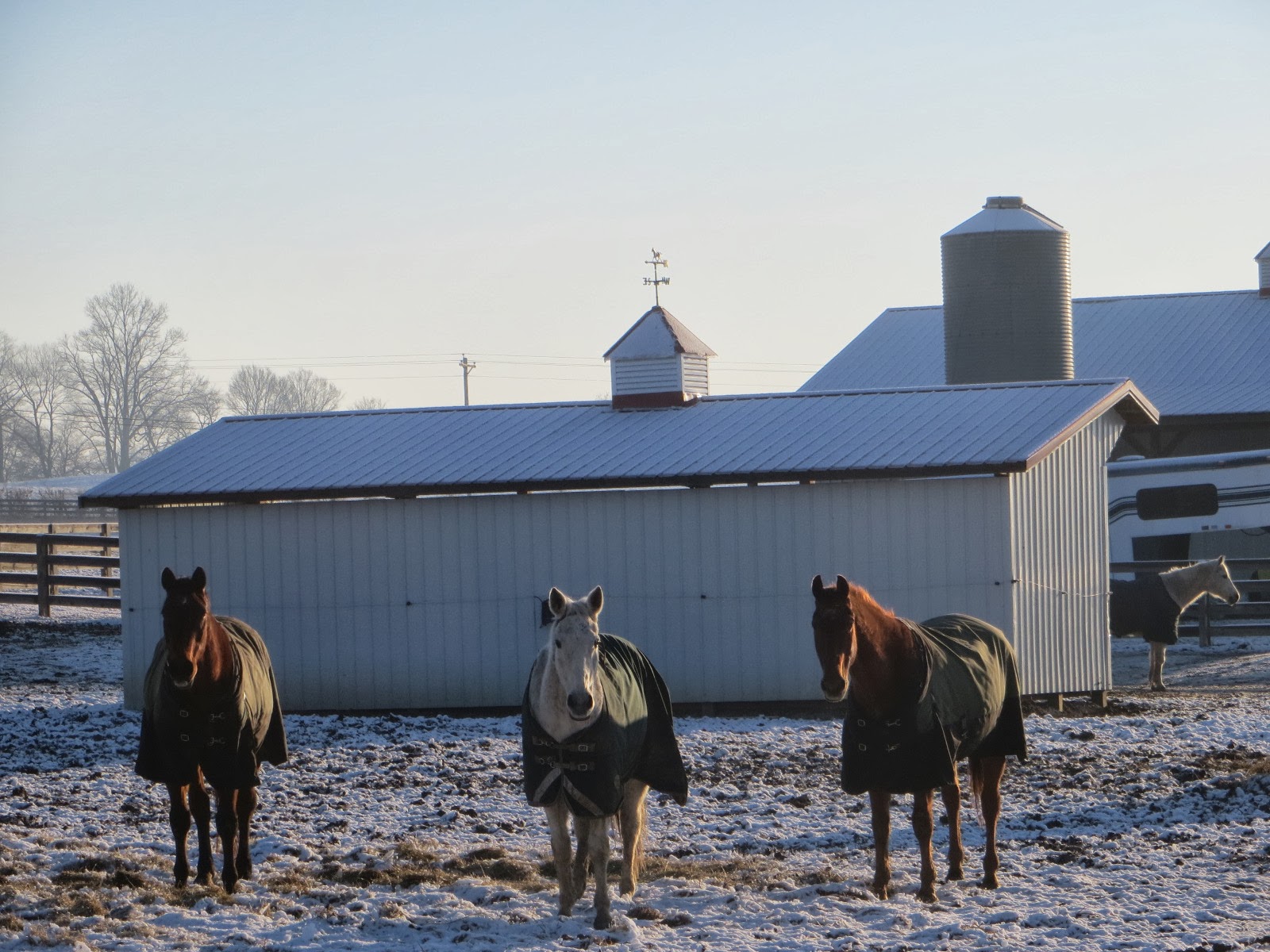 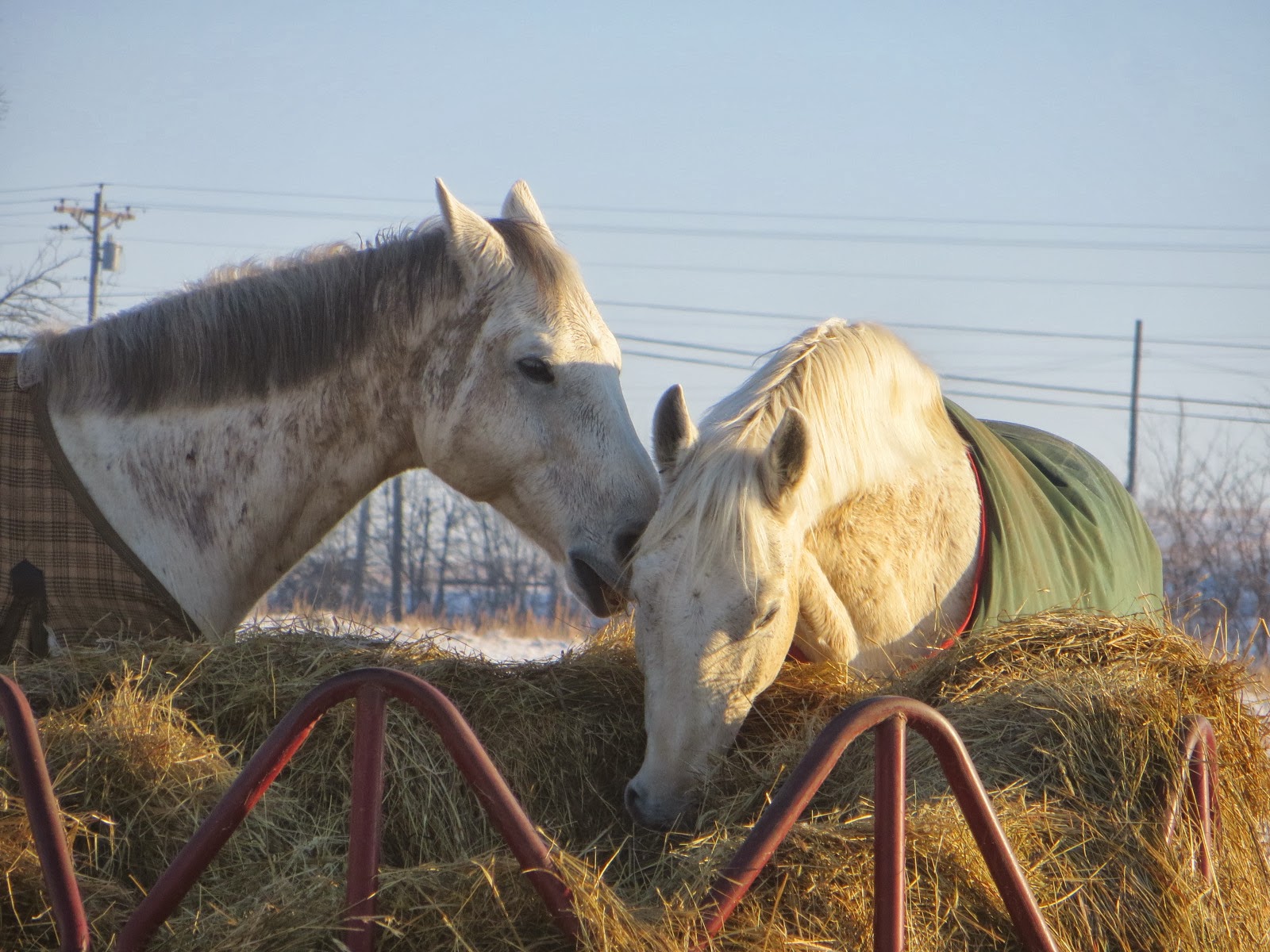 Flyer trotting through the snow 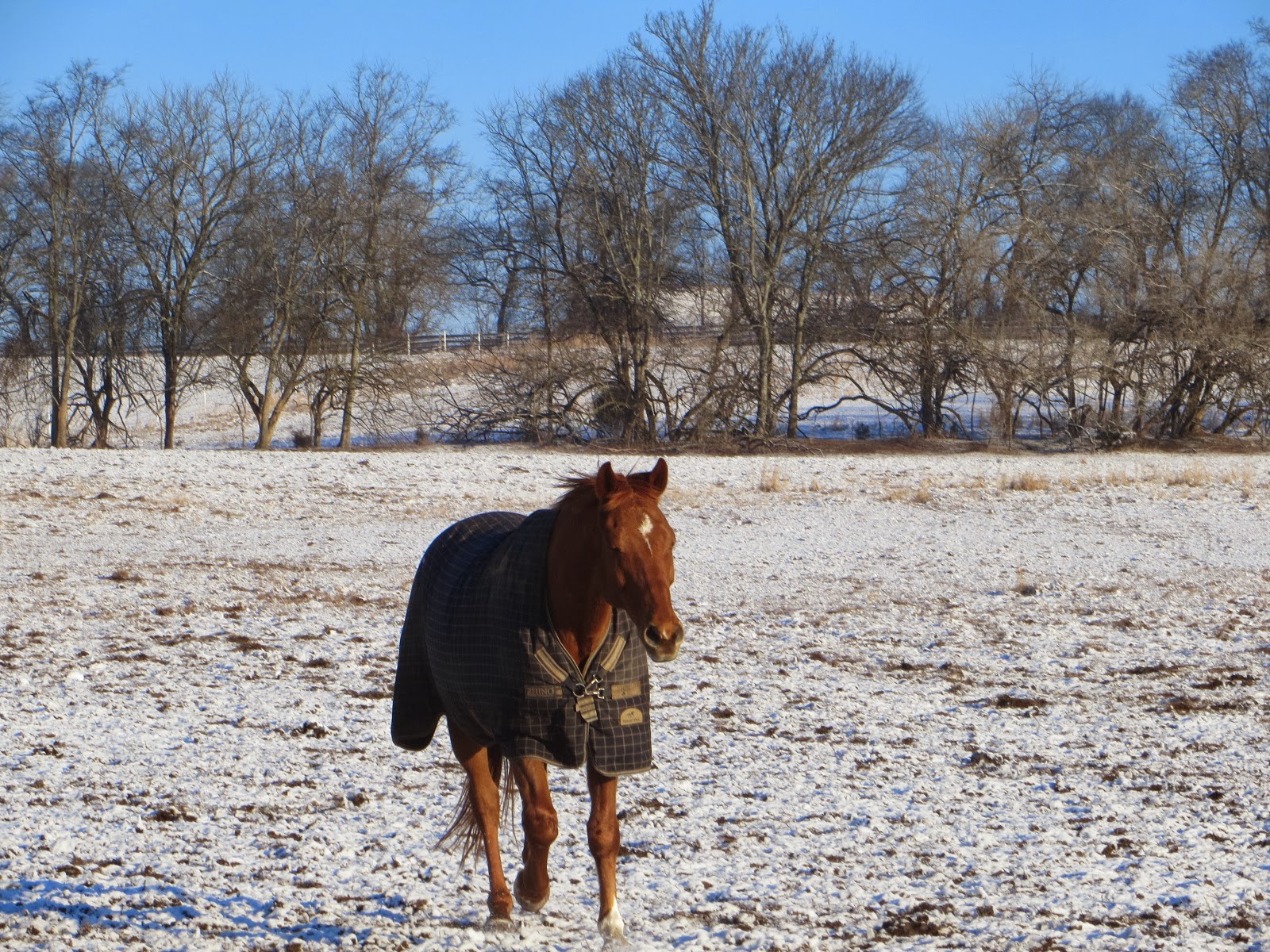 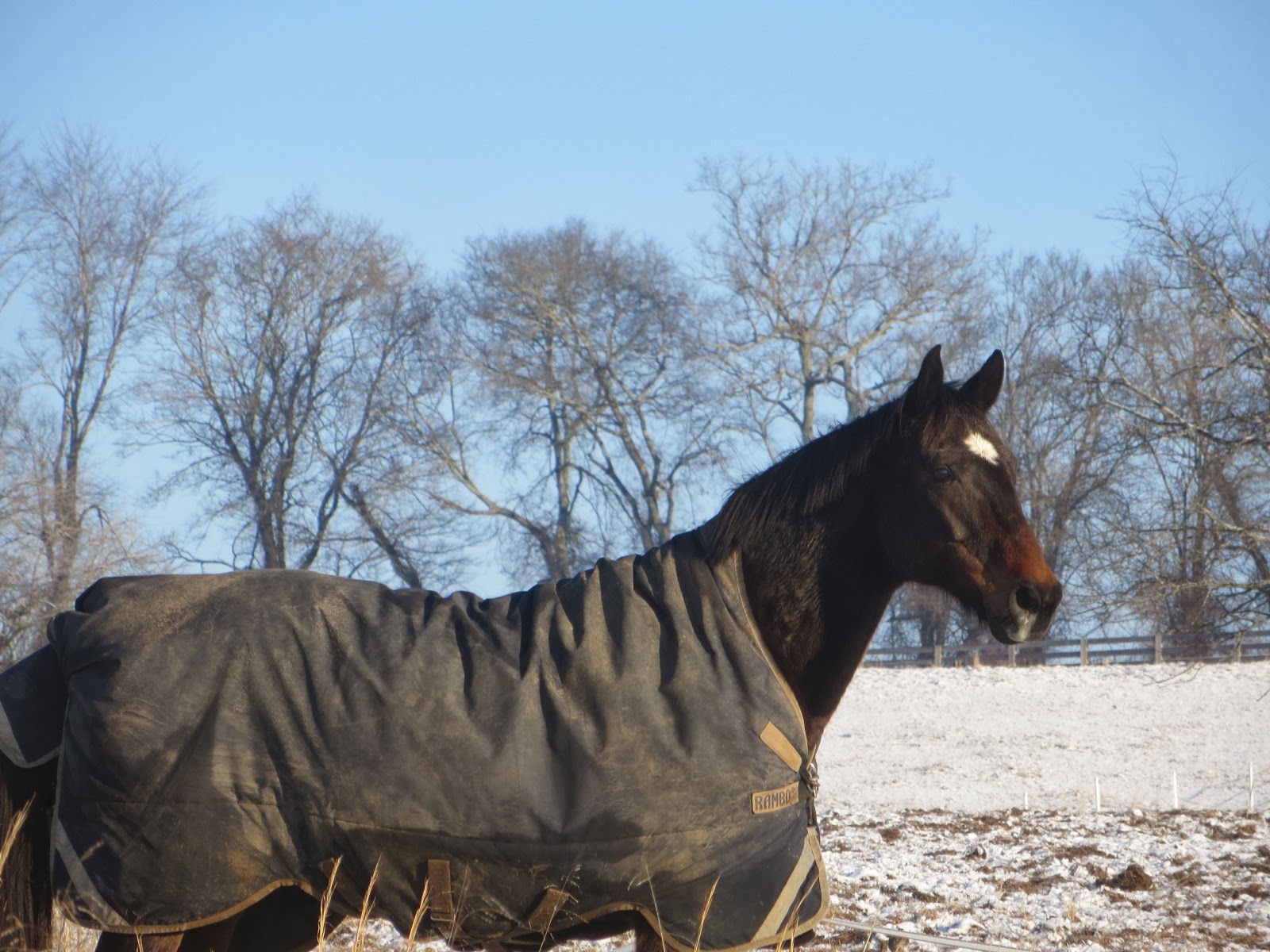 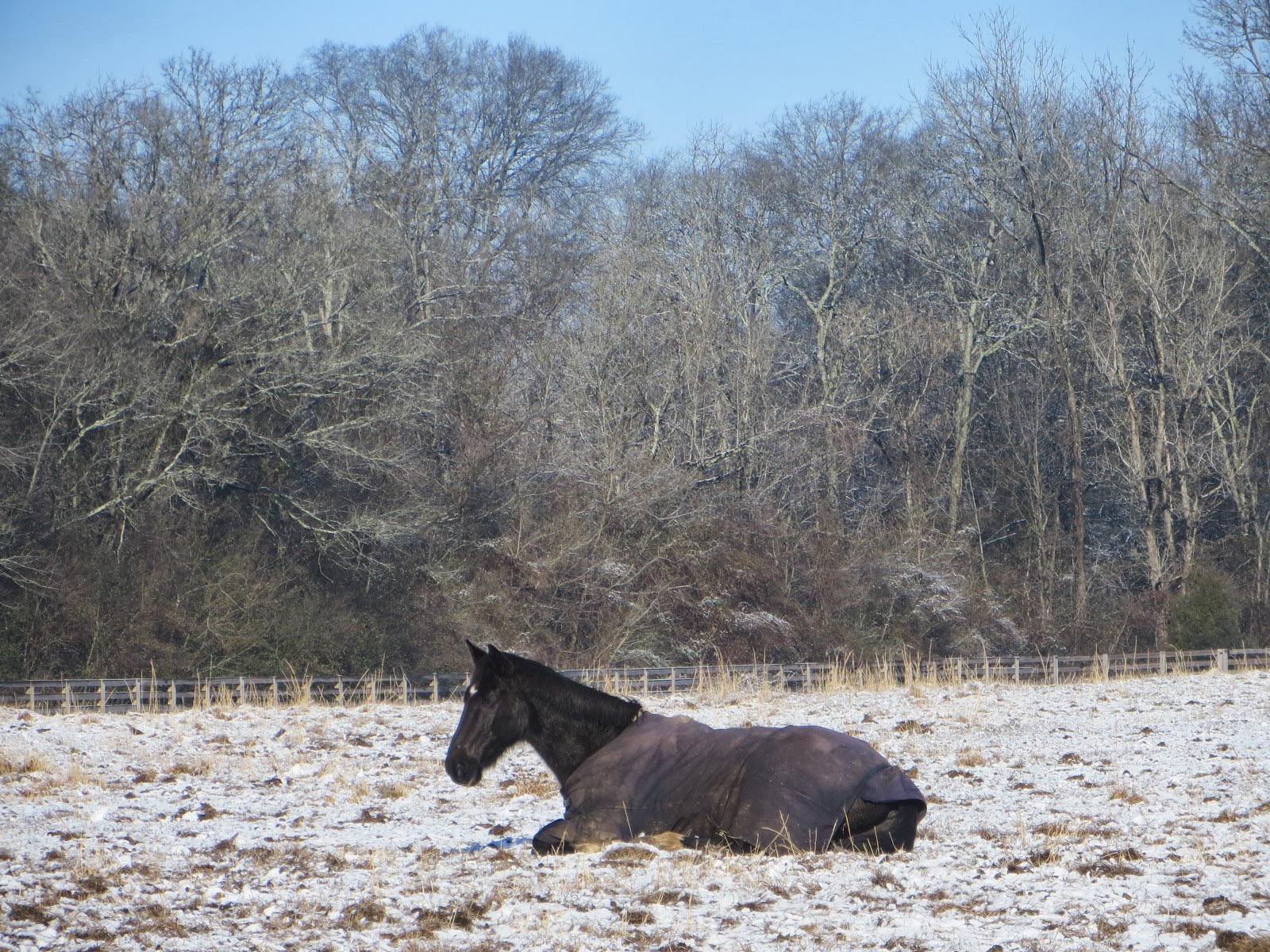 Moe and Ritchie were only interested in breakfast, they didn't care about the snow or pictures 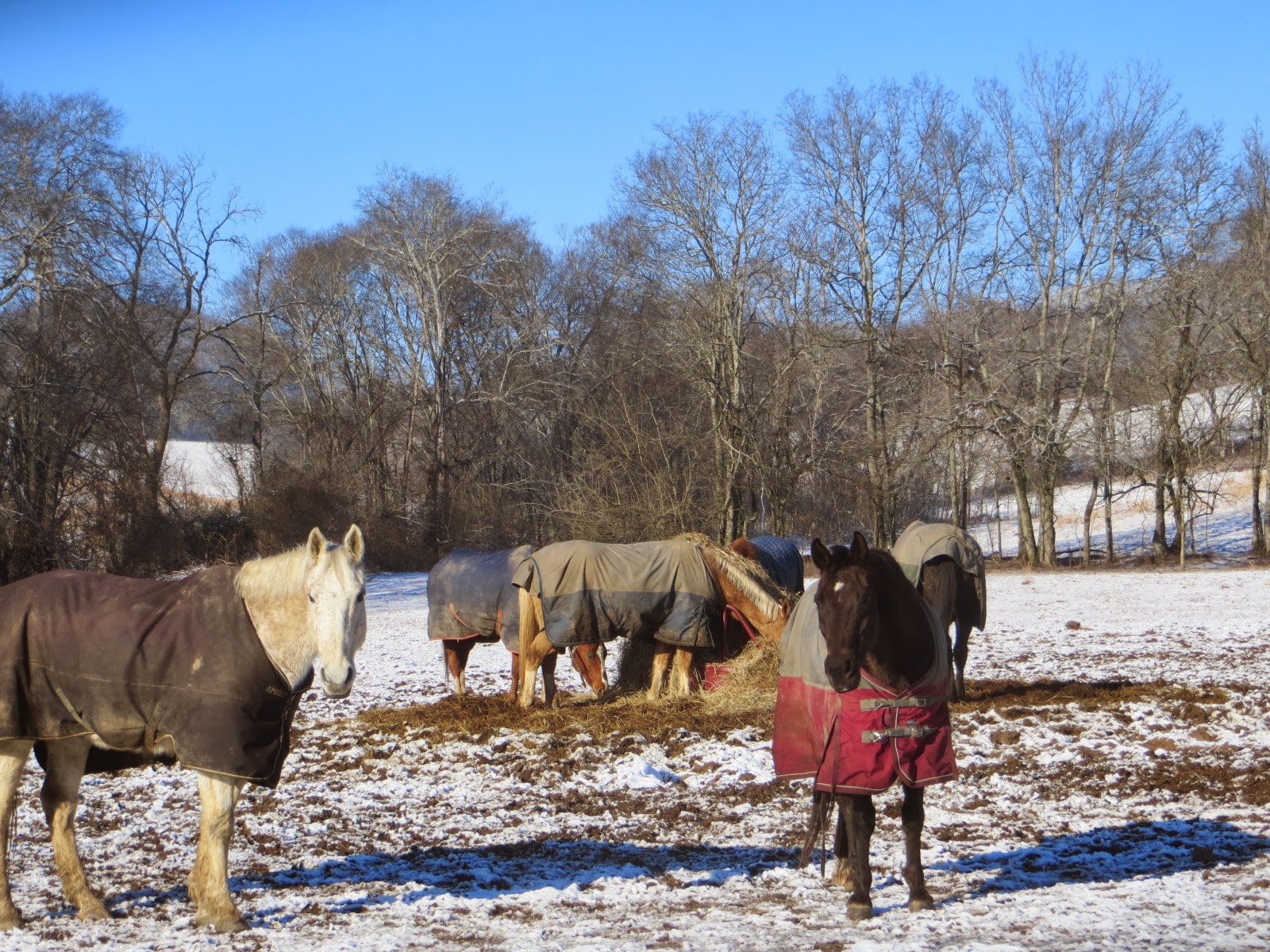 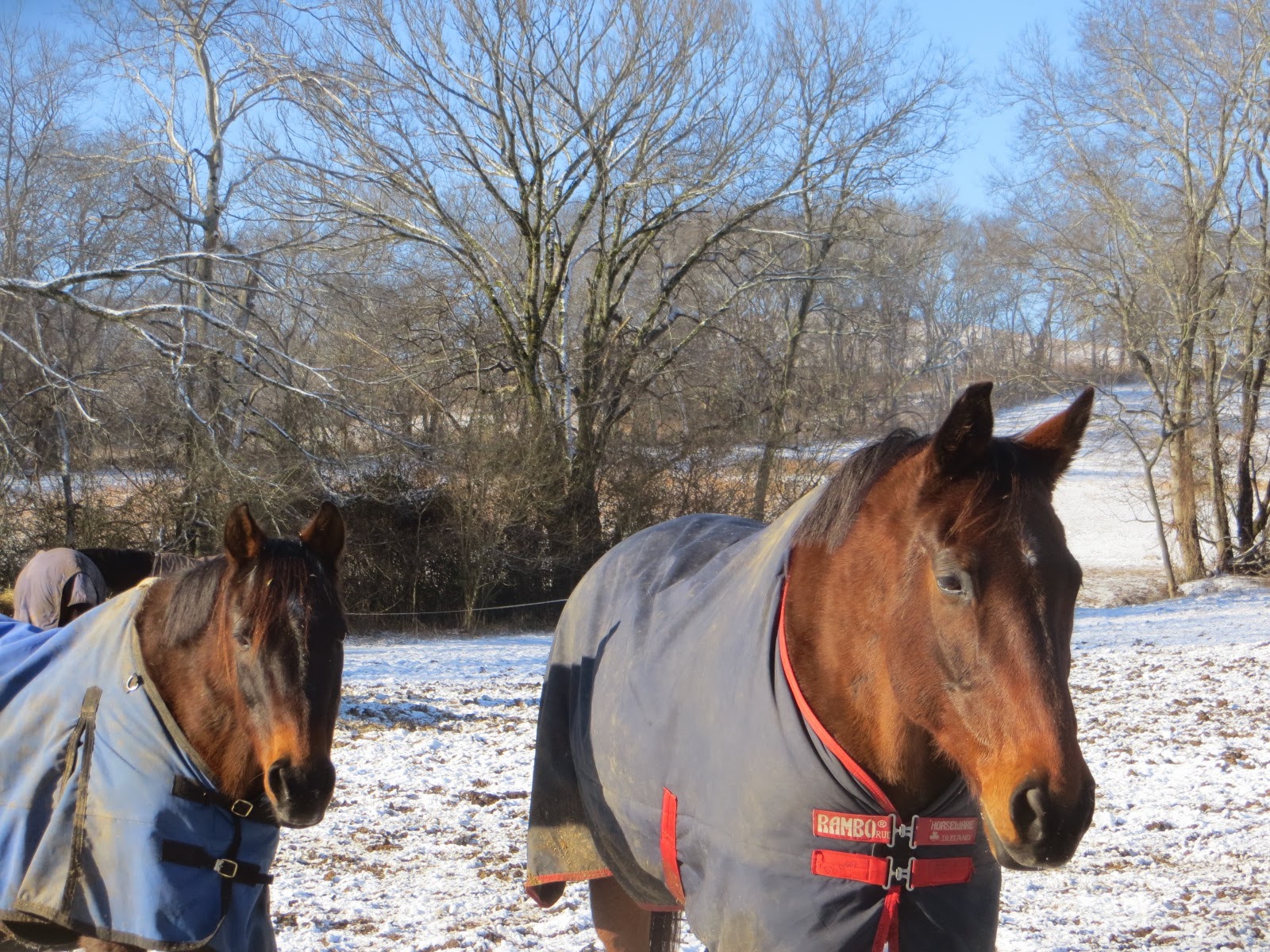 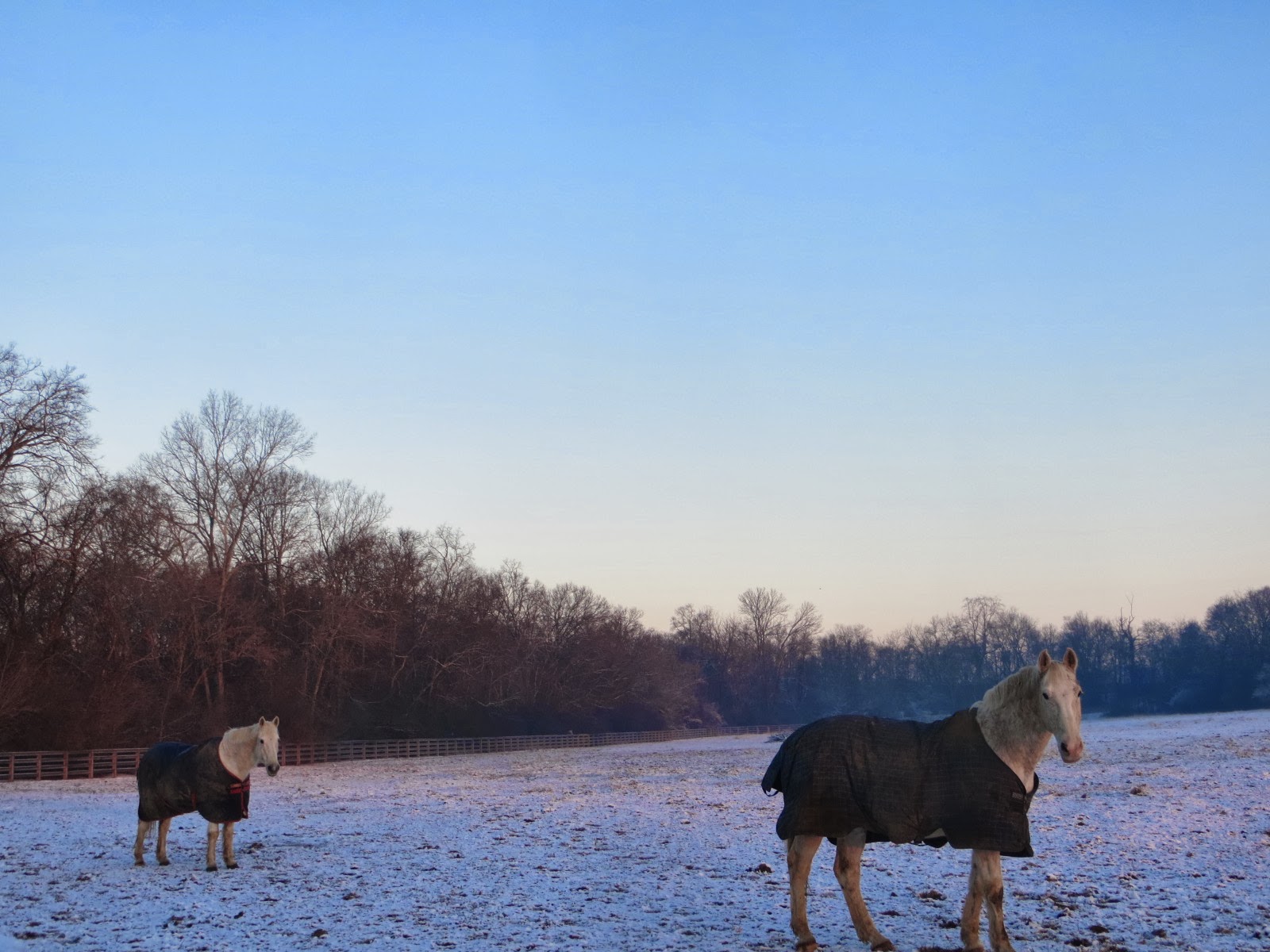 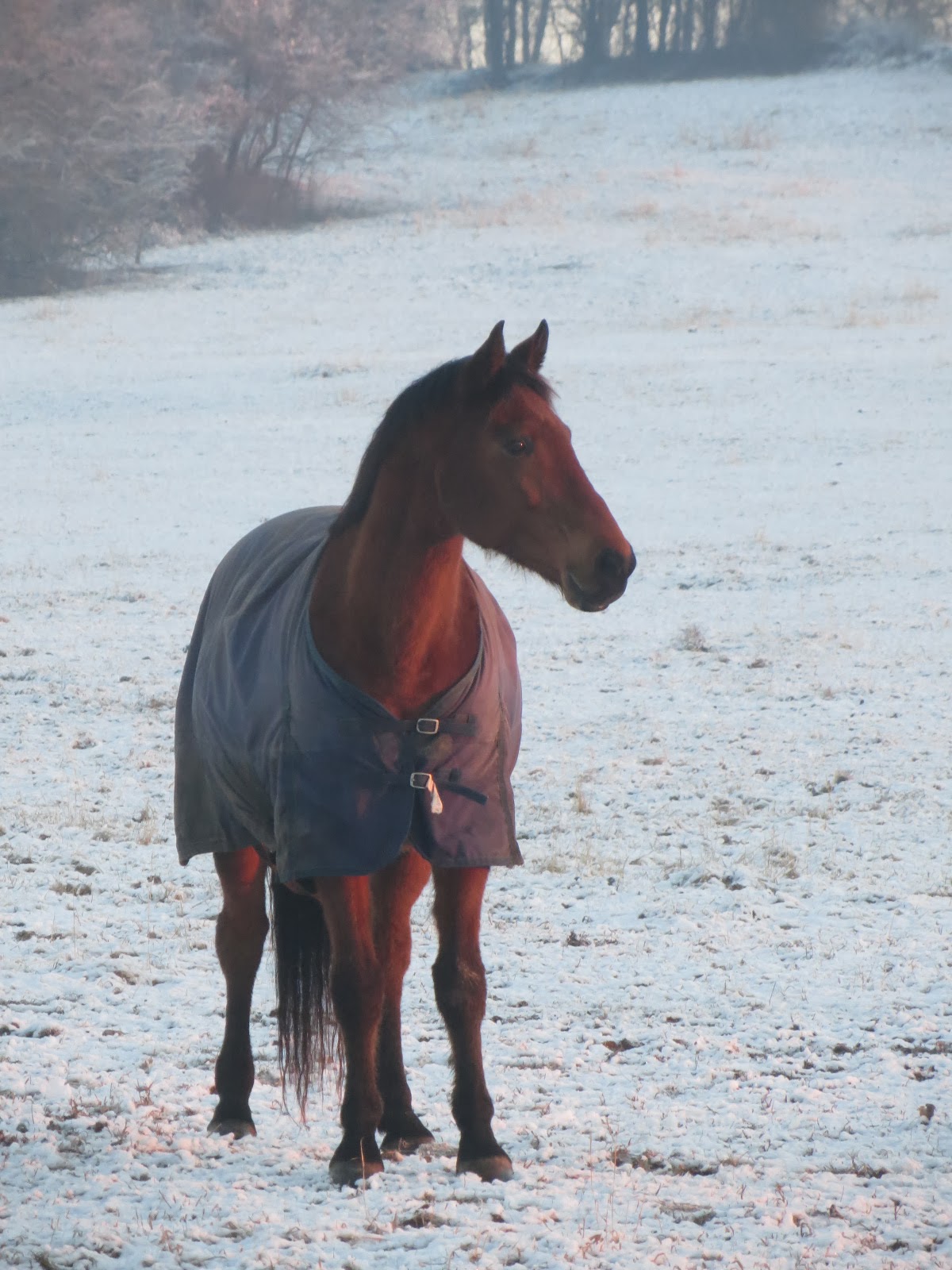 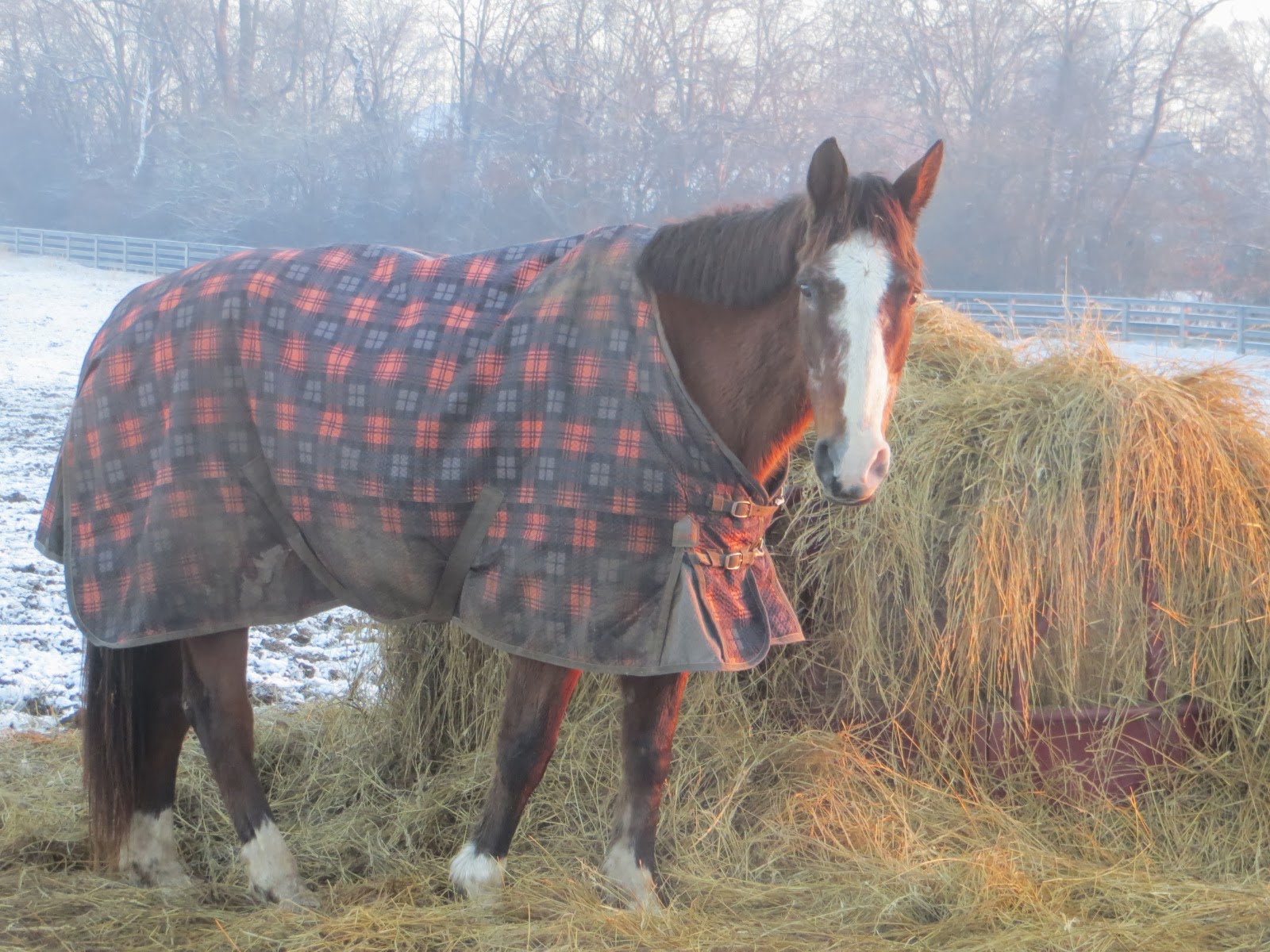 I love the morning light in this picture of Timbit, Miracle and Griselle 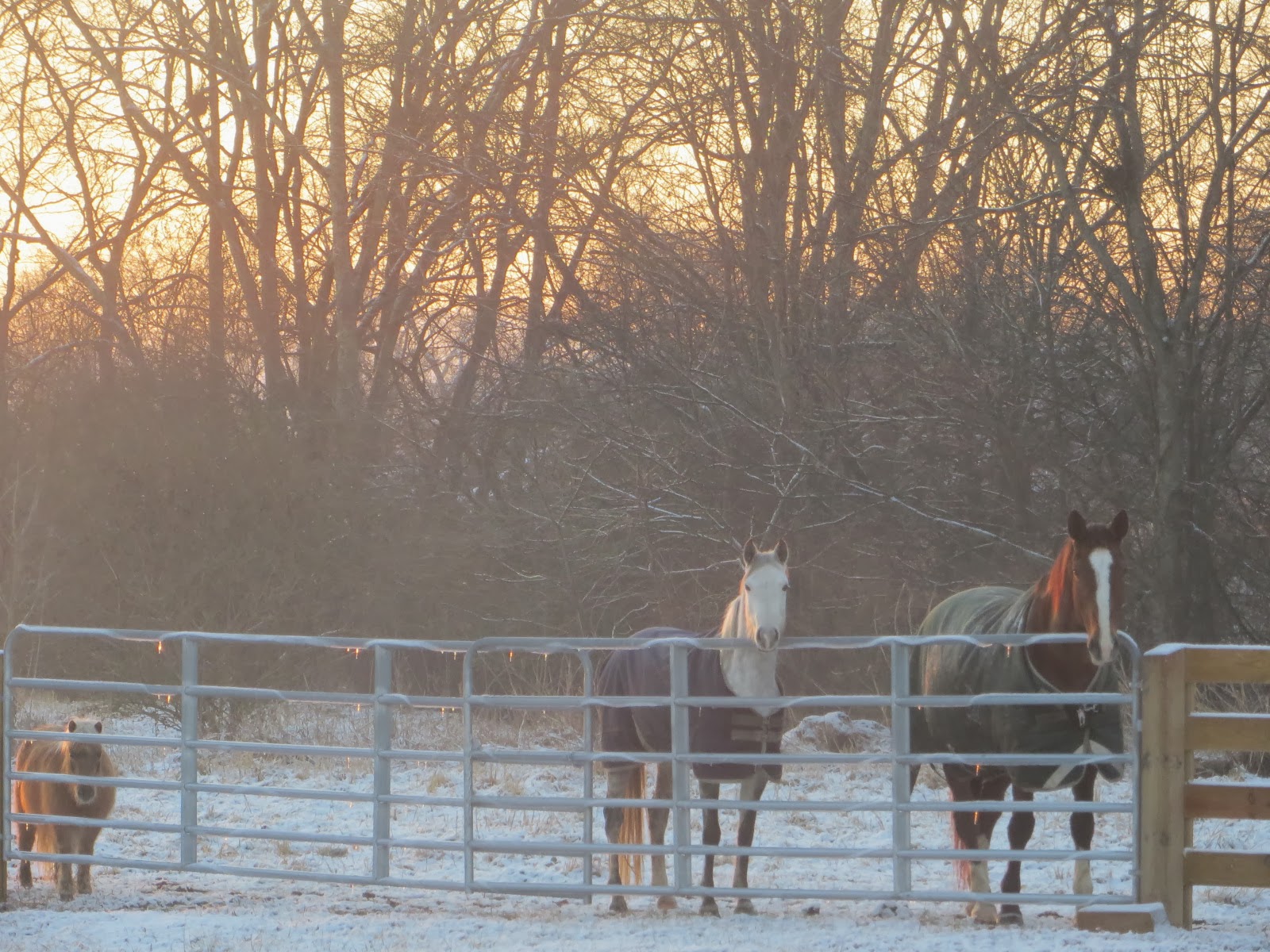 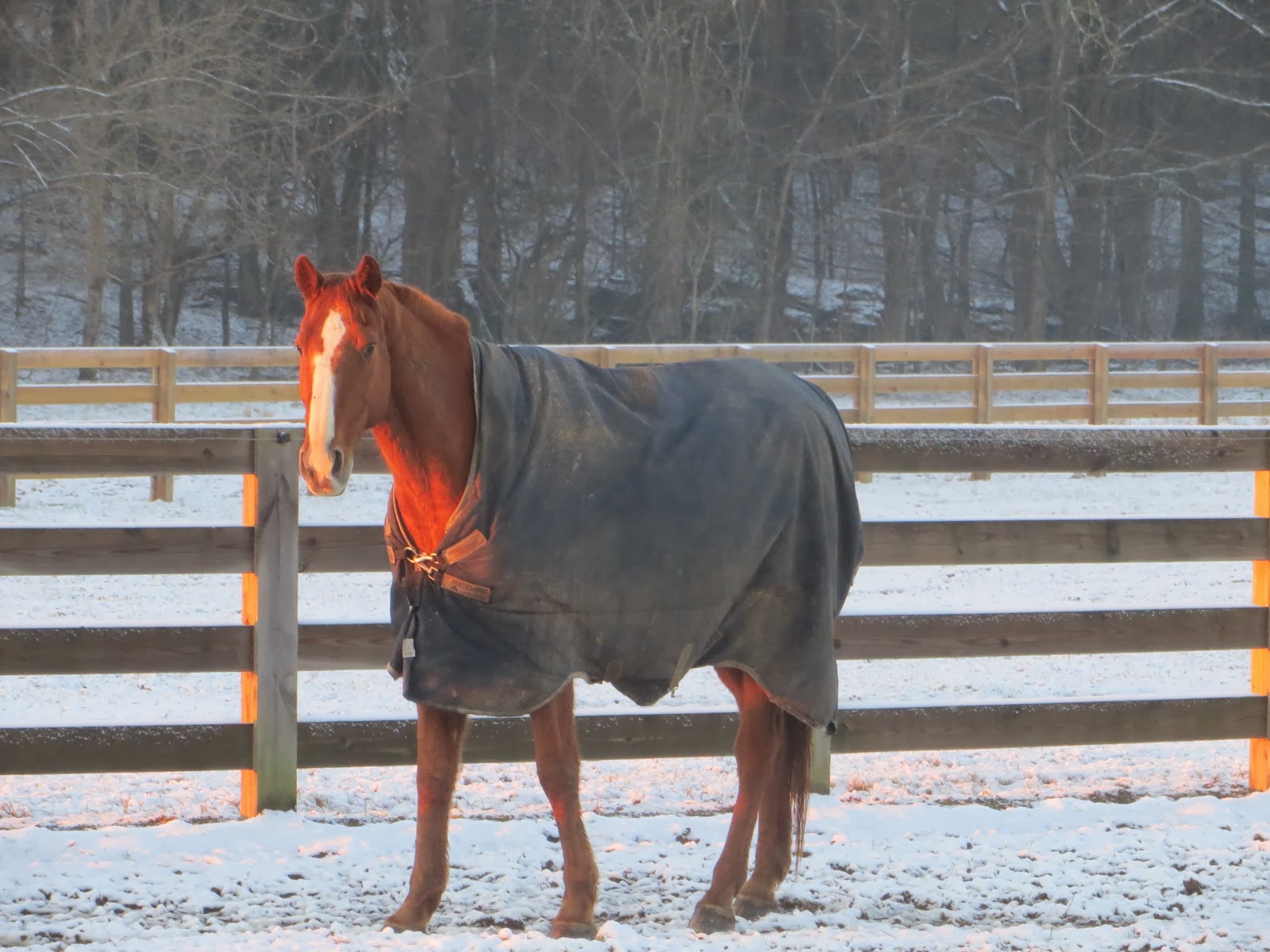 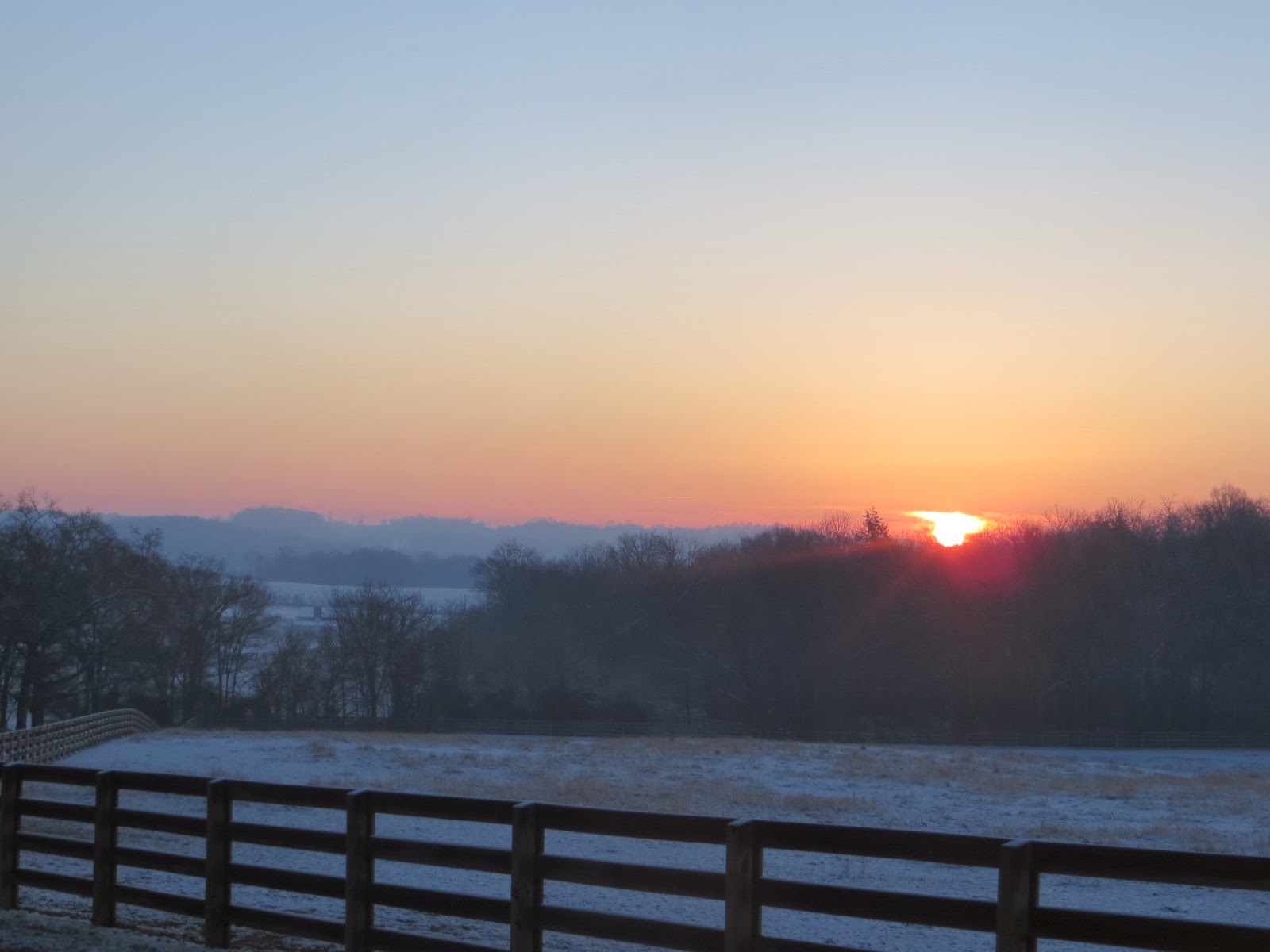 . . . and the same view this afternoon 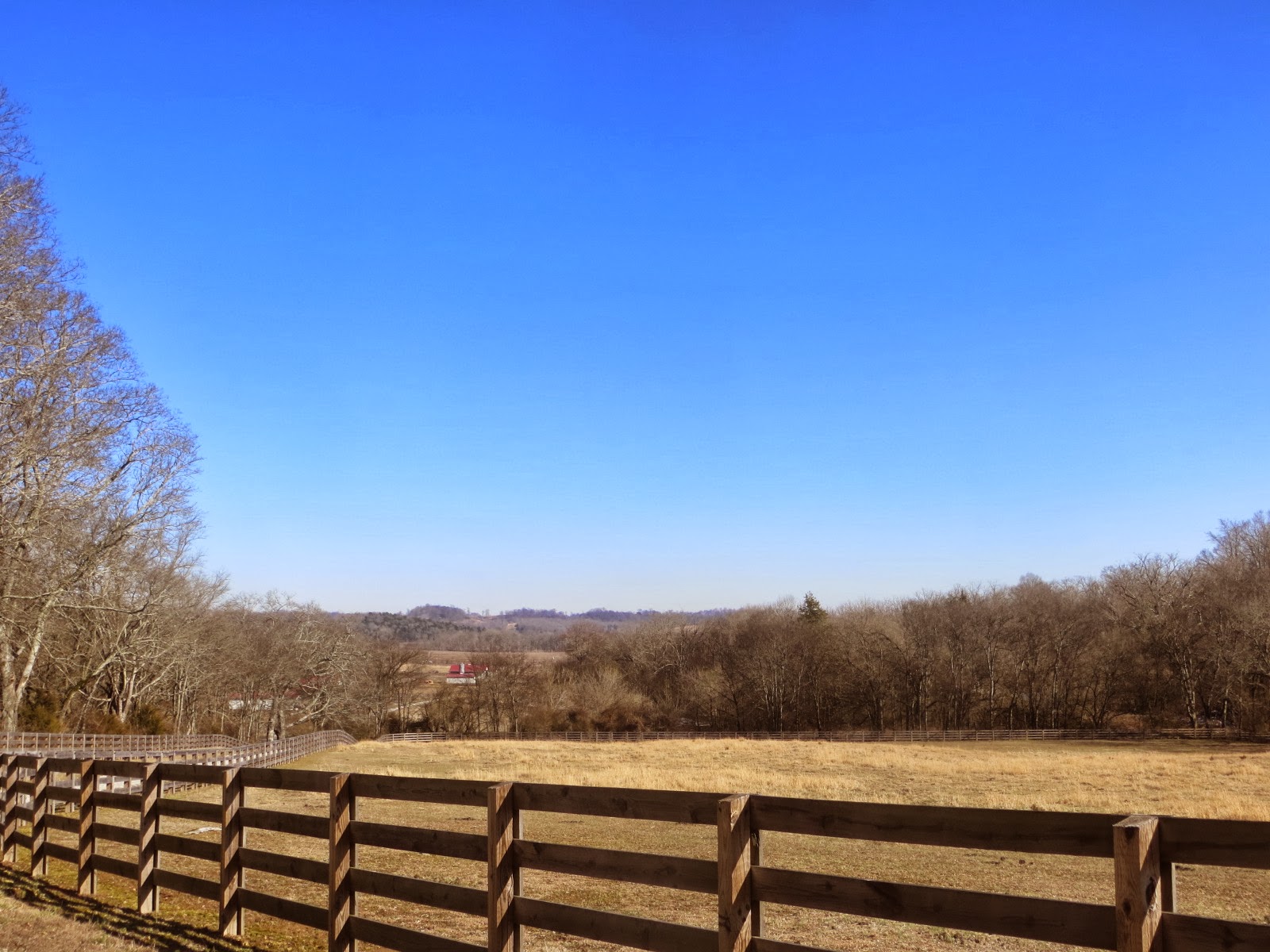 Posted by Melissa-ParadigmFarms at 6:07 PM

An American in snowy Tokyo said...

I love the picture of Sebastian and Lighty and all the sunrise photos!! BEAUTIFUL!!

I know how you feel about the North vs. South snow debate. Here we are experiencing very unusual heavy snow this winter and everything is shutting down, although if they were more prepared, people could actually go to work as normal, too. Ha ha! Hang in there with trying to explain that phenomenon! ;)

WOW SO MUCH SNOW. LOL YOU'LL BE DIGGING OUT FOR WEEKS.LOL GRANNY

Oh Jason, no matter how many years in the South, eh? I love it!

What is it about snow that people in the south don't get? They will catch on fast if we keep on having winters like this.