Sometimes You're The Windshield

Sometimes you're the windshield, sometimes you're the bug. I think that pretty much sums up the highlite (or maybe I should say low point) of our day.  Jason and I were having a normal day doing normal things around the farm. We had just had a conversation in the front barn, I don't even remember what we were talking about, and Jason walked away to get in the truck to drive to the back of the barn.

A few seconds later I heard the slam and the crunch. Then I heard Jason screaming at the top of his lungs "NO! You've got to be kidding me. NOOOOOO!!" I ran out of the barn to see what the heck was going on.

I also saw the newly crunched look our car had just acquired and I understood why Jason was walking in a circle screaming obscenities. He had backed into our car with our truck in our driveway. The truck was unscathed but the car, well, not so much.  Then I started laughing hysterically because the whole scene was just funny.  The crunched car, the circling, yelling husband, and all of this in our very own driveway.  Pretty much anyone aside from Jason would have done what I did and collapse in hysterical laughter. However my response made Jason even more mad so he walked his circle with even more determination and yelled BLEEP even louder.

When I was able to compose myself and stop laughing I told him that he could continue walking his circle for however long he wanted but he should probably stop the screaming since everyone within a hundred miles of our farm could probably hear him. I then spent a few minutes reassuring him that we've all done something this stupid at some point and today was simply his day. I tried to say this with a straight face and without laughing. I didn't succeed.

Yeah, Jason didn't just gently back into the car, he apparently stomped on the accelerator of the truck when he put it in reverse and backed into the car 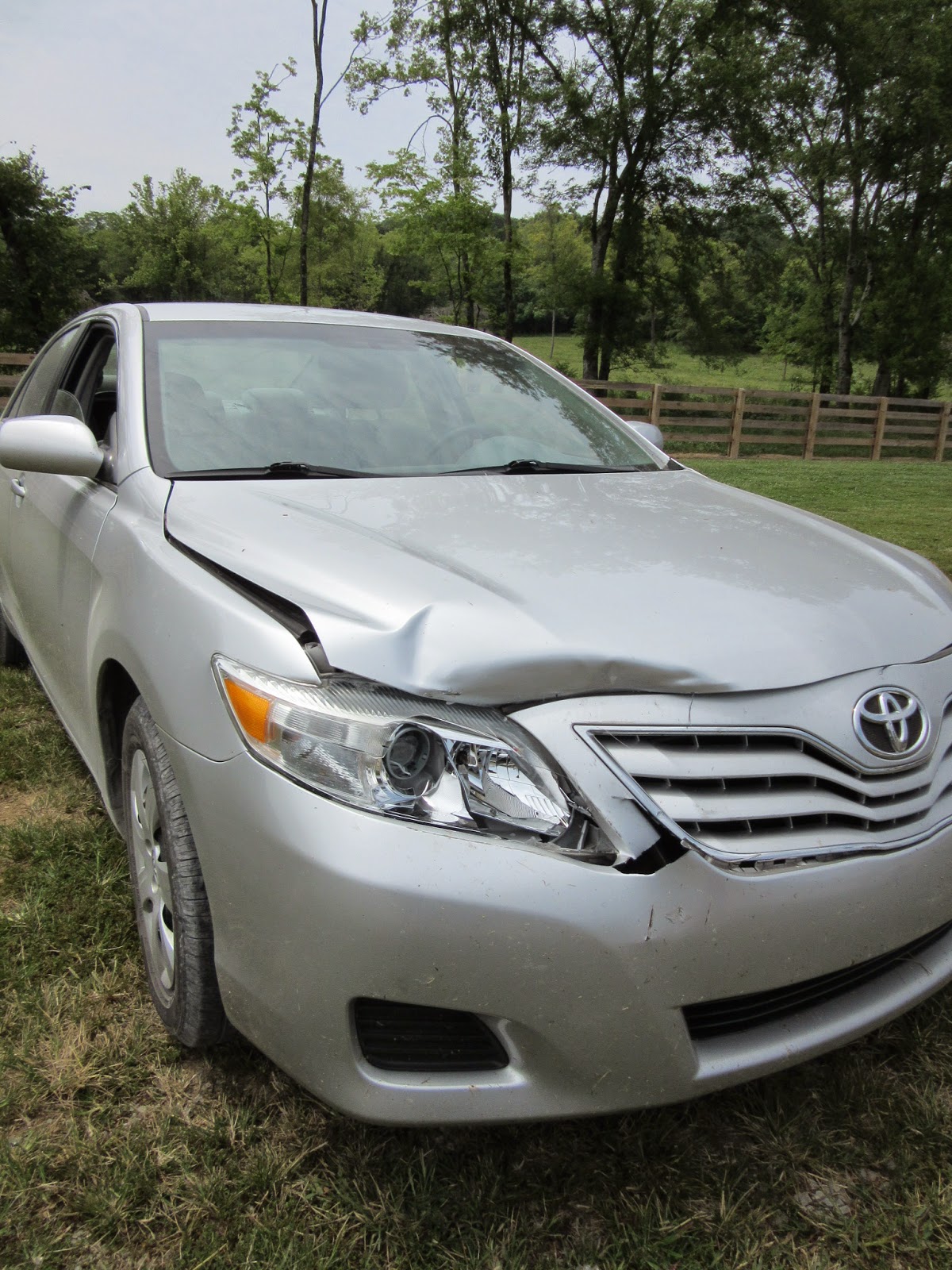 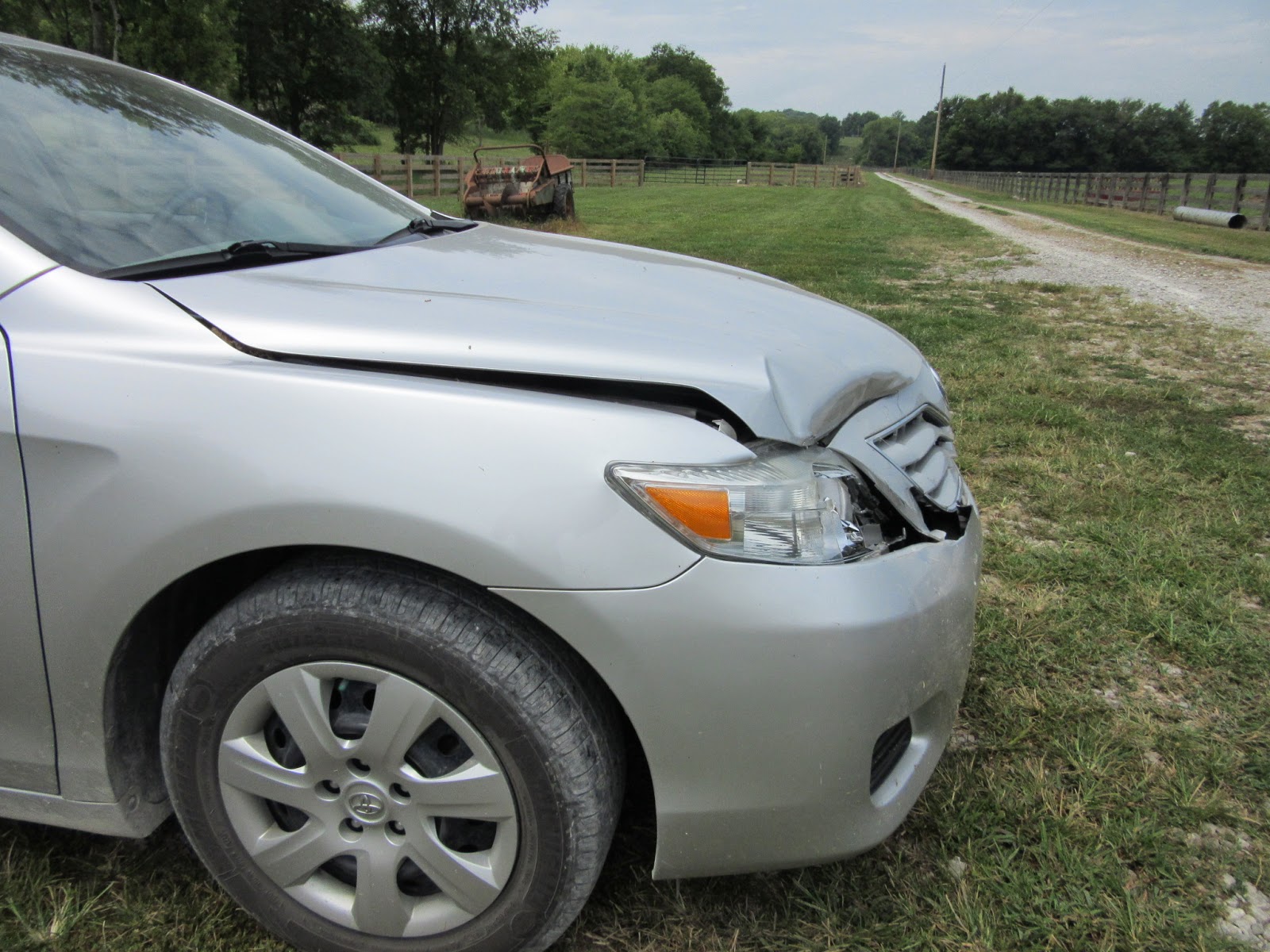 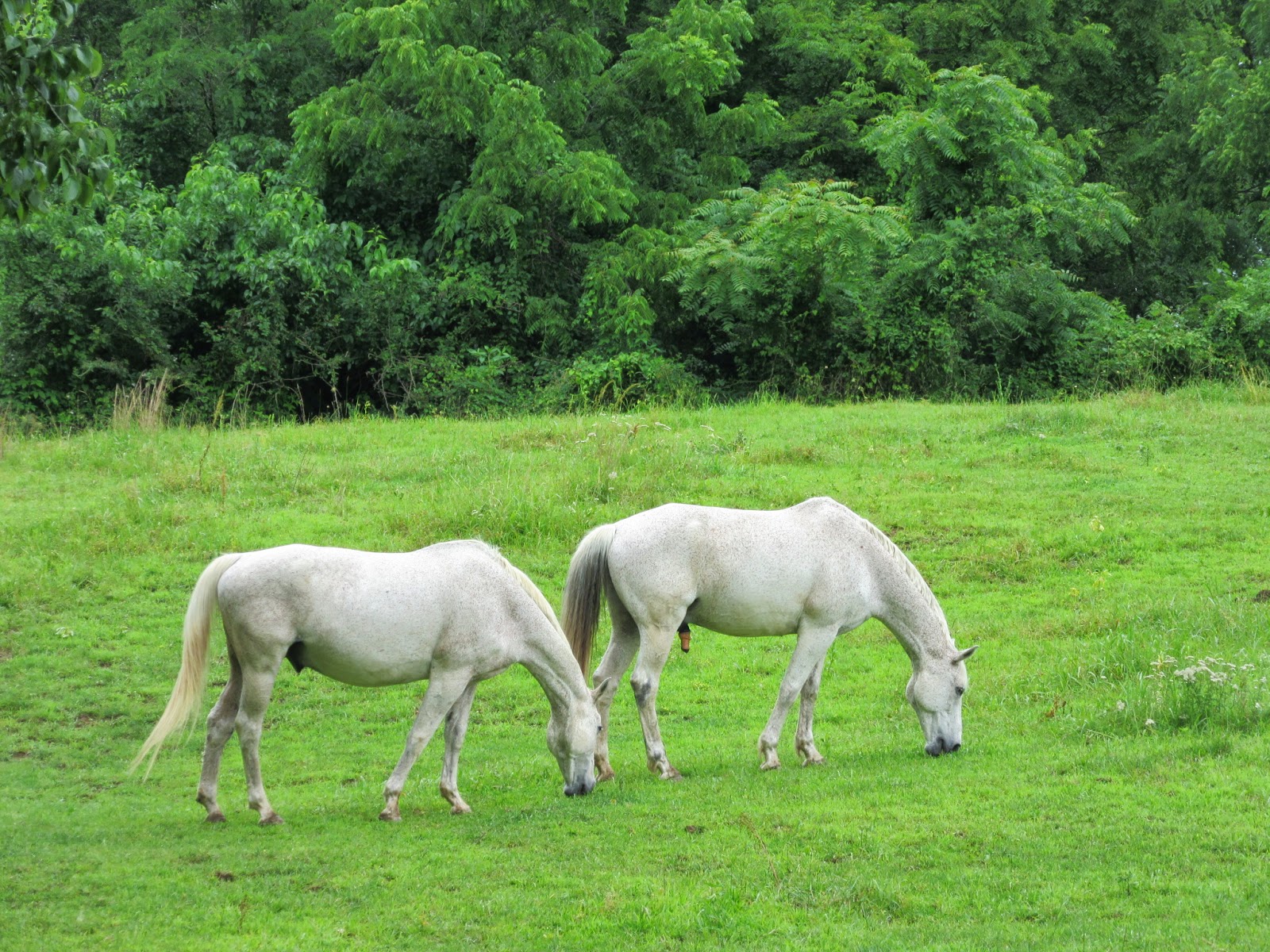 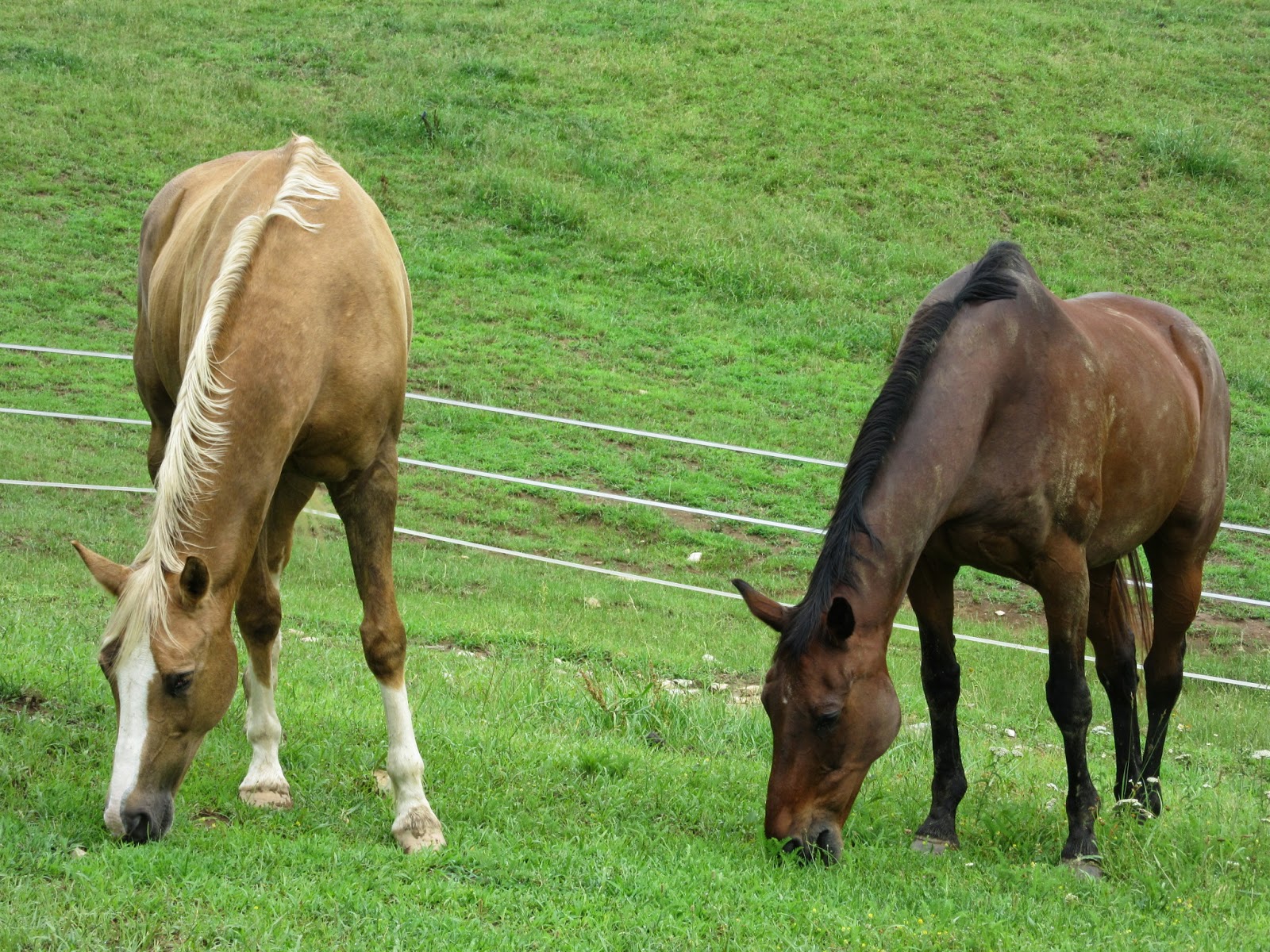 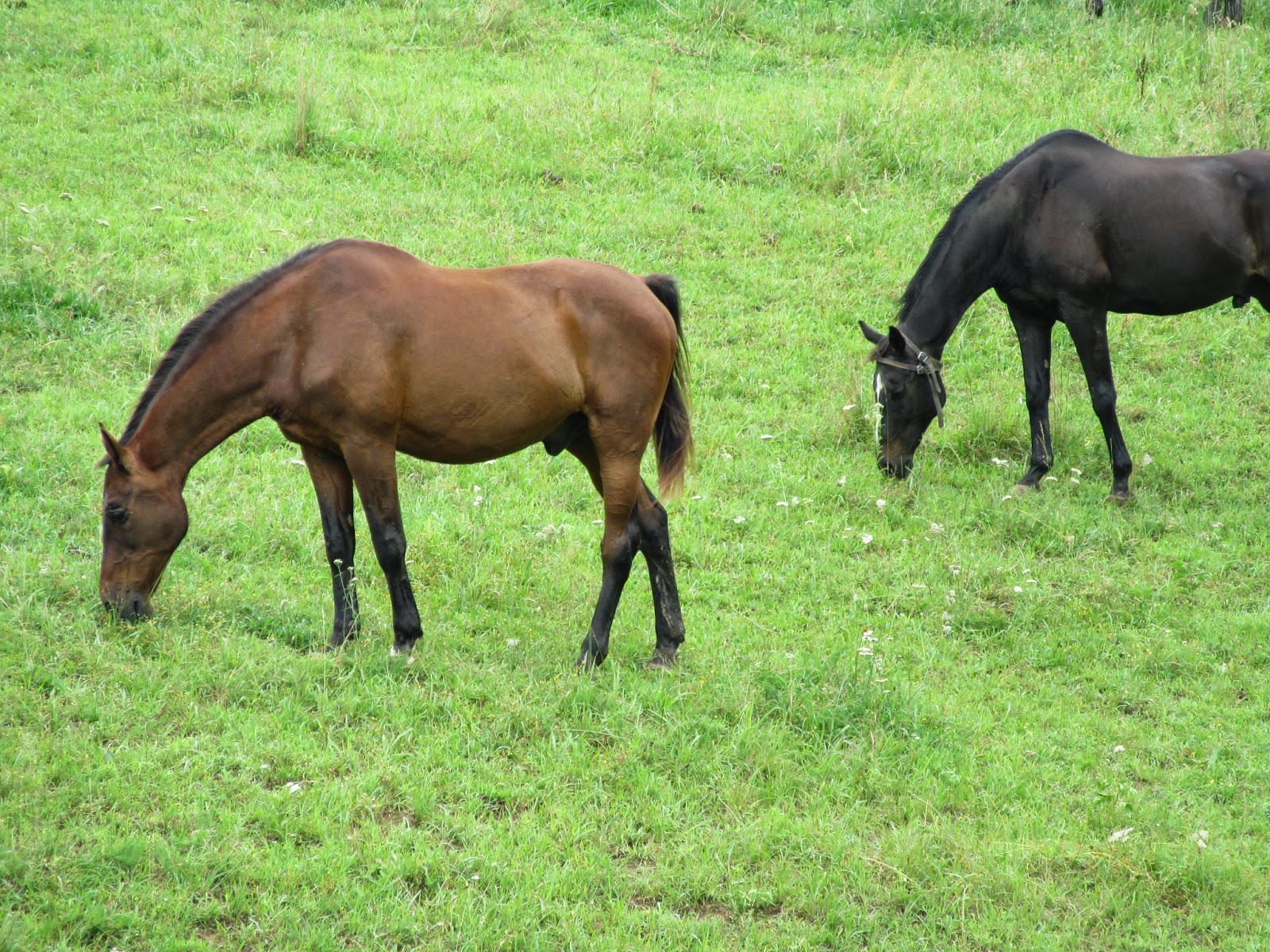 It was so foggy yesterday morning it was hard to find the horses in the pastures; Stormy and Donovan 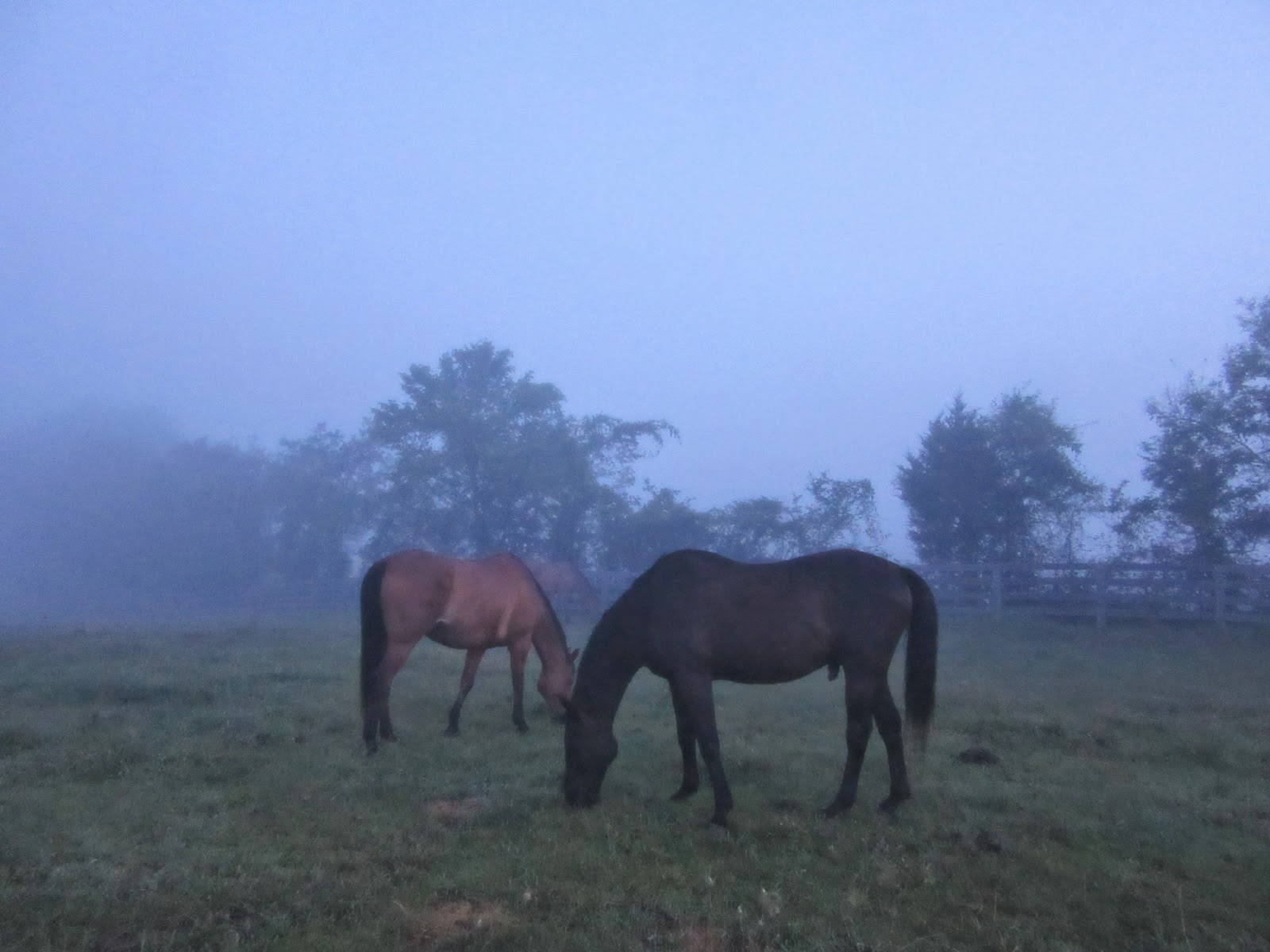 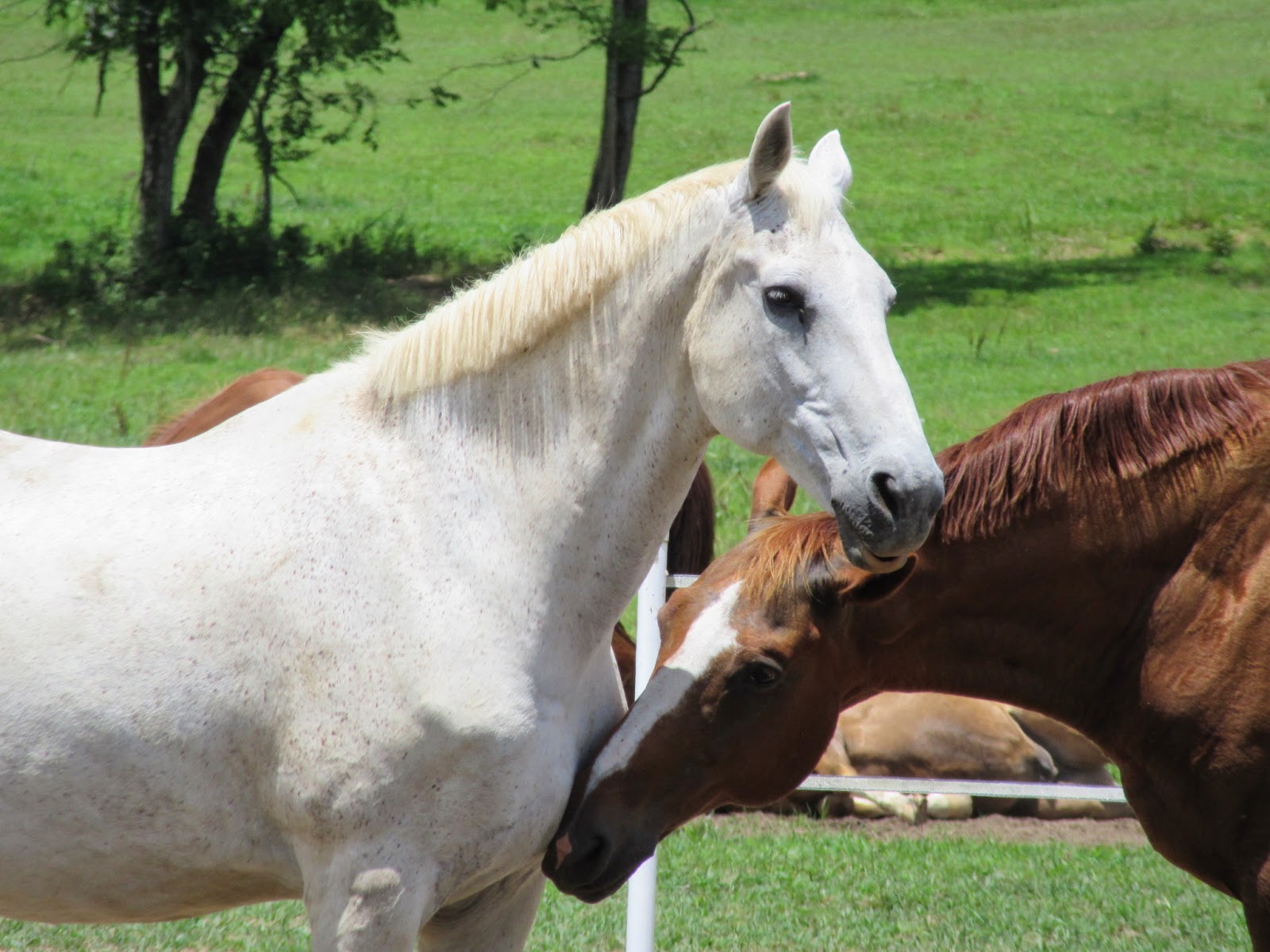 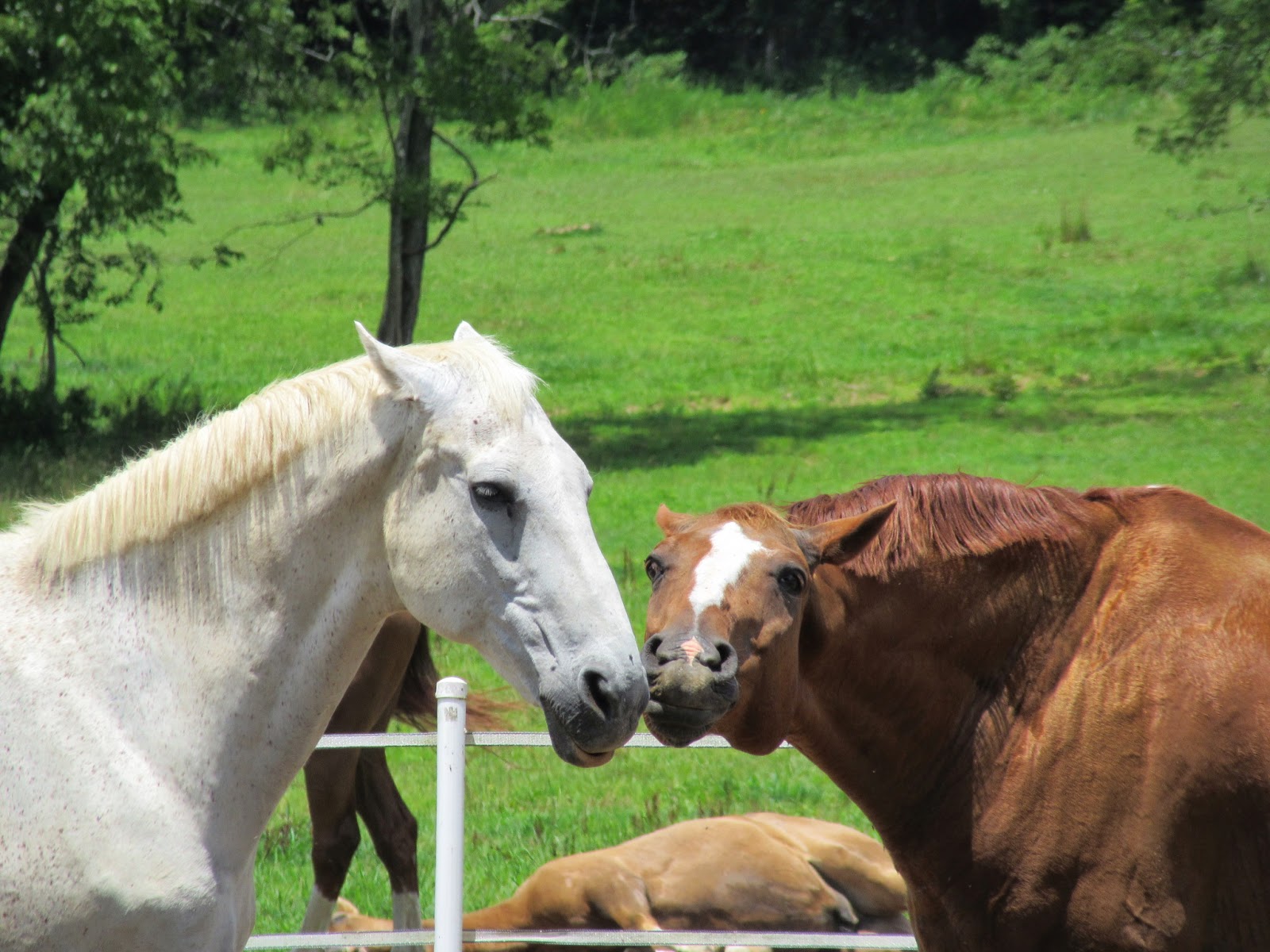 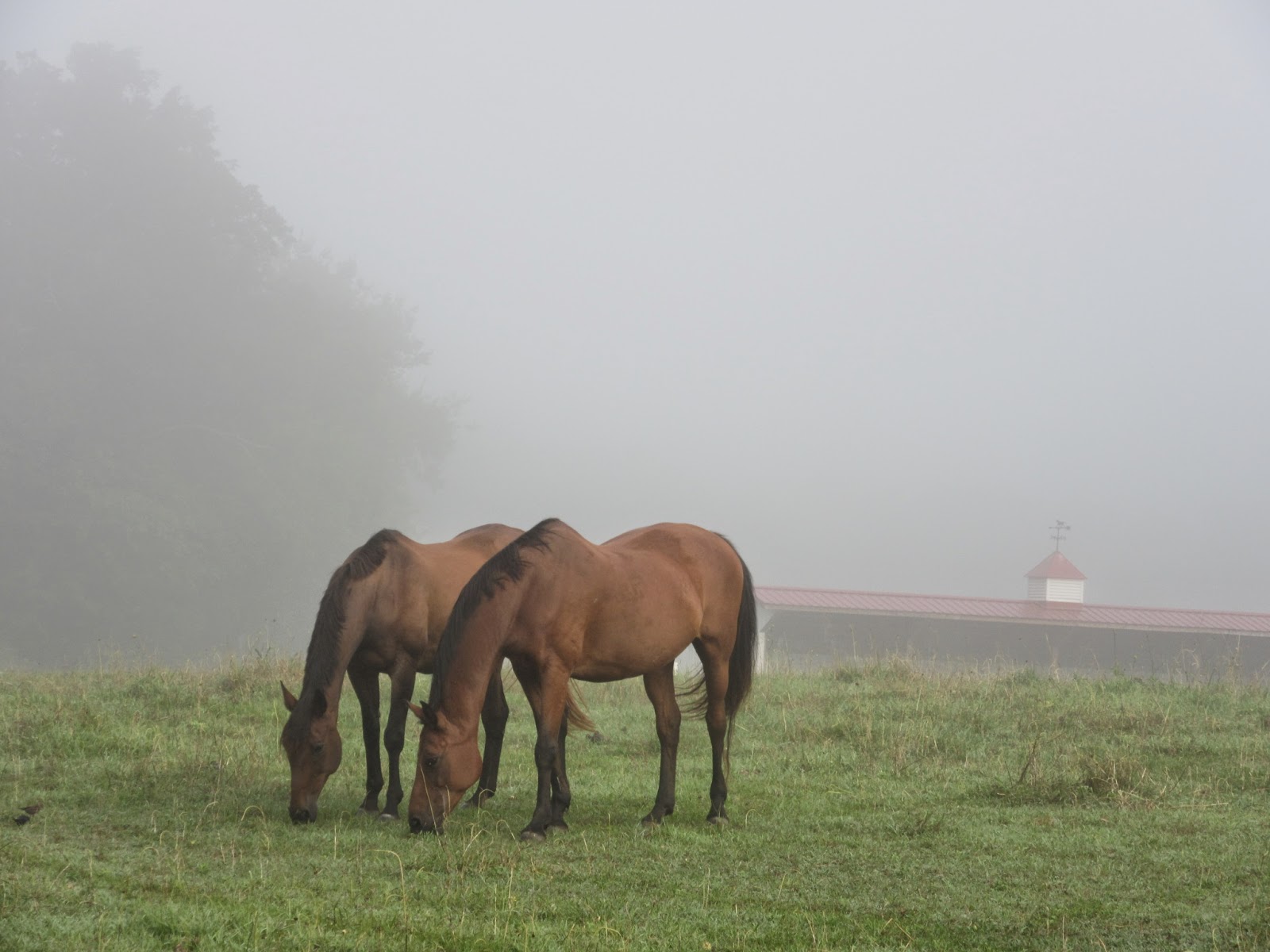 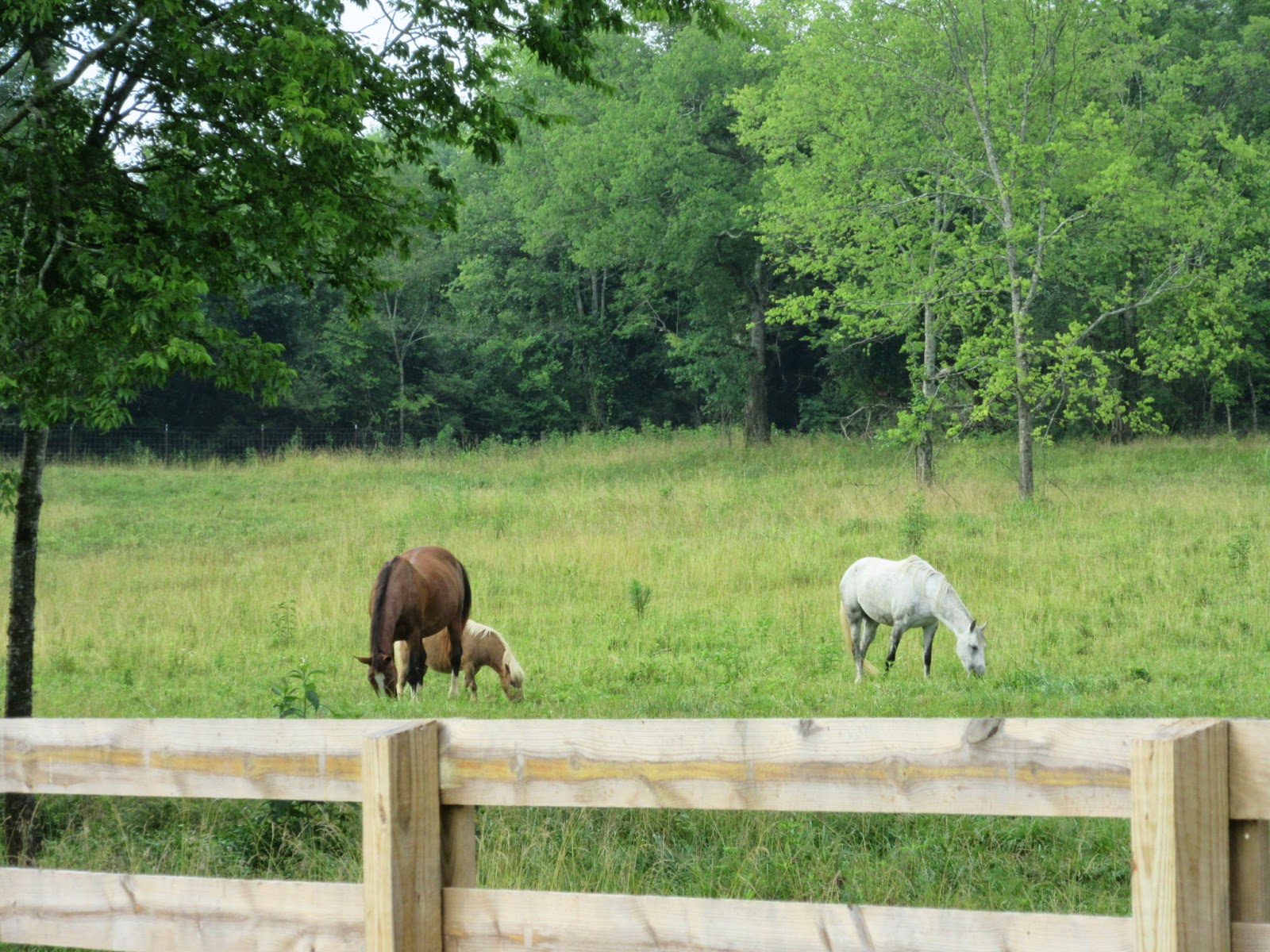 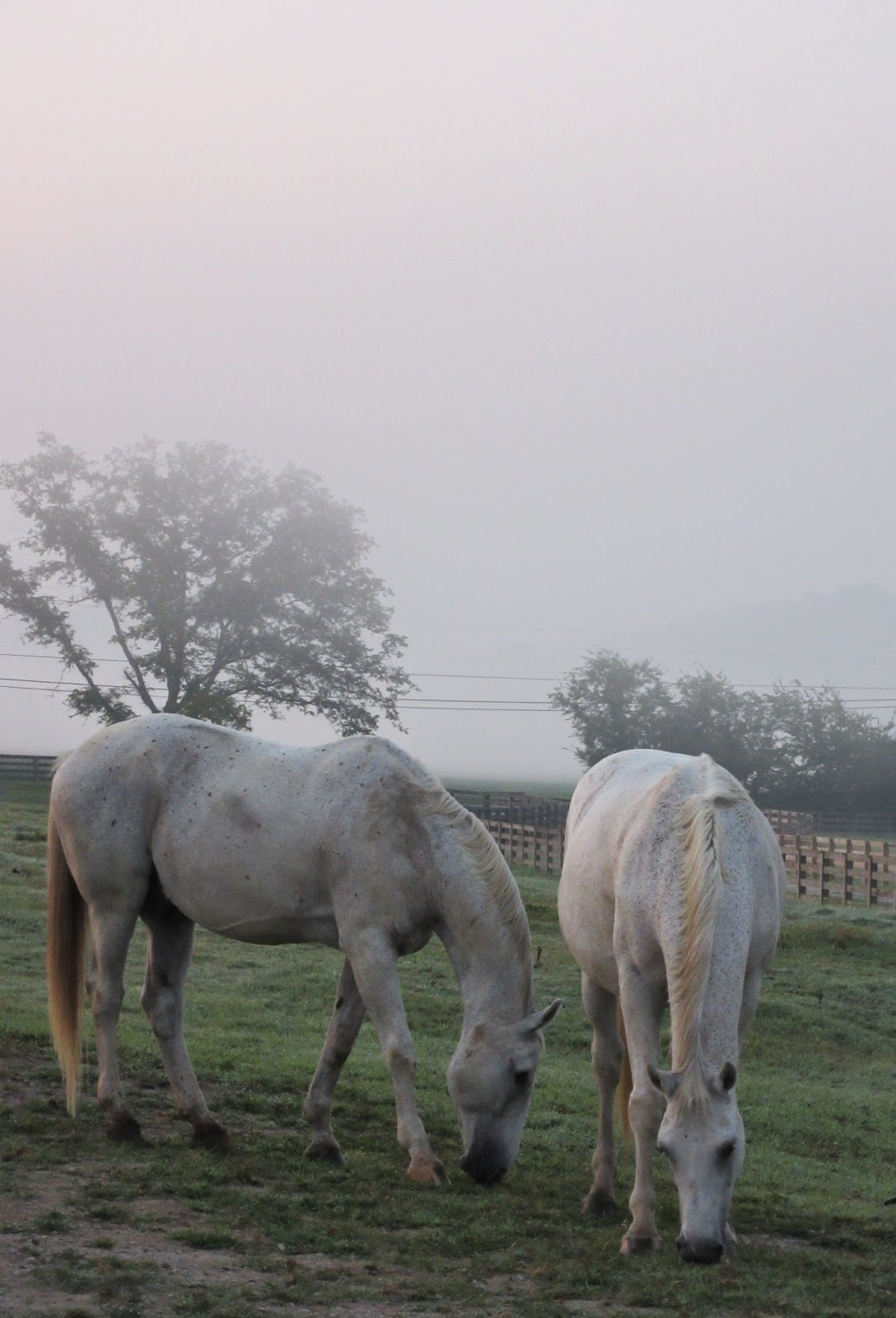 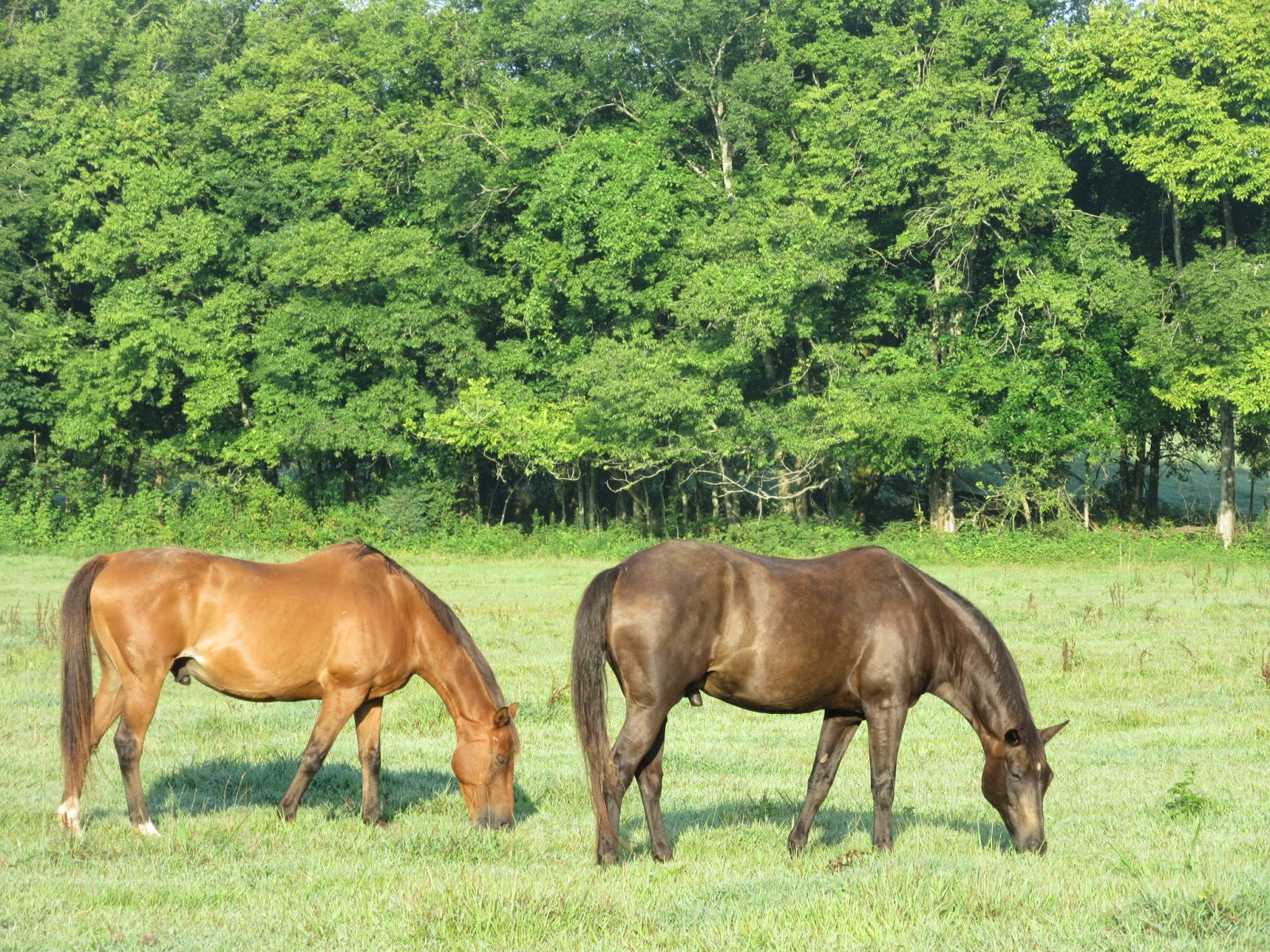 Then there was the time I took the fender off my 4-horse slant trailer turning (in the mud) and ignoring the fact that there was a fence there . . . I could go on, but won't.

Oh Jason, you know that part of a car is made to crumple easily, I bet you didn't even hit it that hard ;)
(heeheeheehee)

I wonder what happens to the tailgate of a (pristine) Tacoma, when someone forgets to lock the hitch before backing the Kubota tractor off the trailer...

Or what happens when your back your lovely new minivan into your husbands F250? Destroys the back minivan door, while the F250 says "Did you touch me or something?. Not a scratch.
I am just glad no living thing was injured.

The auto/F150 interaction at our house, which may or may not have been caused by Someone backing up the mini-van, resulted in a rear-view mirror being ripped off the van. It was reattached and then Someone did it again, this time fracturing the plastic mirror shield part. It's still like that... :-/

(I'm usually an excellent driver but like many others, apparently, not so much in my own driveway. Poor Jason!)