I have learned to be surprised by nothing when we are floating teeth, especially if it is the first time we have had any horse's teeth floated. It is kind of along the same lines that I have learned to be surprised at nothing when I look down at the hooves when a horse arrives. I've seen horses whose heels didn't touch the ground (with shoes on, intentionally shod this way), a horse that had two shoes and three pads per hoof (not a gaited horse).  Between teeth and hooves we've seen some pretty crazy things show up at our farm.

In the most recent batch of teeth we floated I think my "favorite" one was the poor horse who supposedly had been attended to by a dentist every year. When our dentist did his first look and feel in his mouth his descriptions started with "oh my" and then progressed to "oh no" and finally ended with something I'd never heard him say before, "oh shit." Needless to say that last comment commanded full attention from Jason and I.

As Jason and I stood there looking at him and the horse with wide eyes the dentist explained that the poor horse had a hook on his very last lower molar that was almost two inches tall. Quite frankly I didn't believe him. So he opened the speculum back up and I took a look and felt around for myself. Unfortunately he wasn't exaggerating, not even a little bit. The poor horse. No wonder he couldn't eat hay at all, could never quite seem to close his mouth all the way, couldn't really move his jaw and generally always seemed a little bit grumpy. The two inch hook was far from the only major problem, just the most appalling one.

We worked on the horse in question for an hour. We closed the speculum multiple times and gave him lots of breaks but the horse was a saint after being fussy the first few minutes. Each time we would close the speculum we would see his tongue  moving around checking things out, then he would cautiously try to move his jaw to see if it could move. After the first few minutes he stopped fussing and stood like a statue. Since our dentist went straight to the mountain of a hook in his mouth the horse quickly realized that whatever this guy was doing to him it was definitely a relief and he wanted him to do more. When he was able to fully close his mouth the relief the horse felt could be seen in his entire body. When he was finally able to both close his mouth and move his jaw from side to side the horse looked like he wanted to climb into our dentist's lap and curl up there.

Watching that horse sigh with relief and stand there with his mouth fully closed, which he wouldn't have been able to do for years, was a perfect moment. This horse had been maintained by a dentist that only used hand tools and didn't use a speculum. There are lots of lessons we could take away from this horse's experience. However when it comes to dental work I think one of the most important ones is do not work with a dentist that doesn't open your horse's mouth with a speculum. There isn't enough room at the very back of most horse's mouths to reach the back molars and have room to work with the float (which will need to be able to move slightly past the last molar) without a speculum. The speculum also gives you a chance to both look and feel all the way in the horse's mouth so you can get an idea for yourself of what is going on in there.

Don't get caught up in the hand tools vs. power tools debate. Our dentist uses both. My personal preference is to work with someone that uses both but my number one criteria is simply someone that is good. So I'm not going to rule someone in or out because they only use hand tools or only use power tools. I have said before and will say again that the most badly overfloated horse we ever had come to the farm came from a dentist that only used hand tools. The hands holding the tools are what is important. You can really mess up a  mouth with a power float. You can really mess up a mouth with hand tools. We've seen the results of both and they are equally ugly.

Although dentist days are far from my favorite days there are aspects of them I like. I always learn something new, and I love it when we have an opportunity to truly help a horse. We have one more dentist day to go and we'll be done for the year. I'll be happy if I never see another two inch hook again. I've learned to be a little nervous whenever we open up a horse's mouth for their first float with us. You never know what you are going to find inside.

Alex having his teeth floated 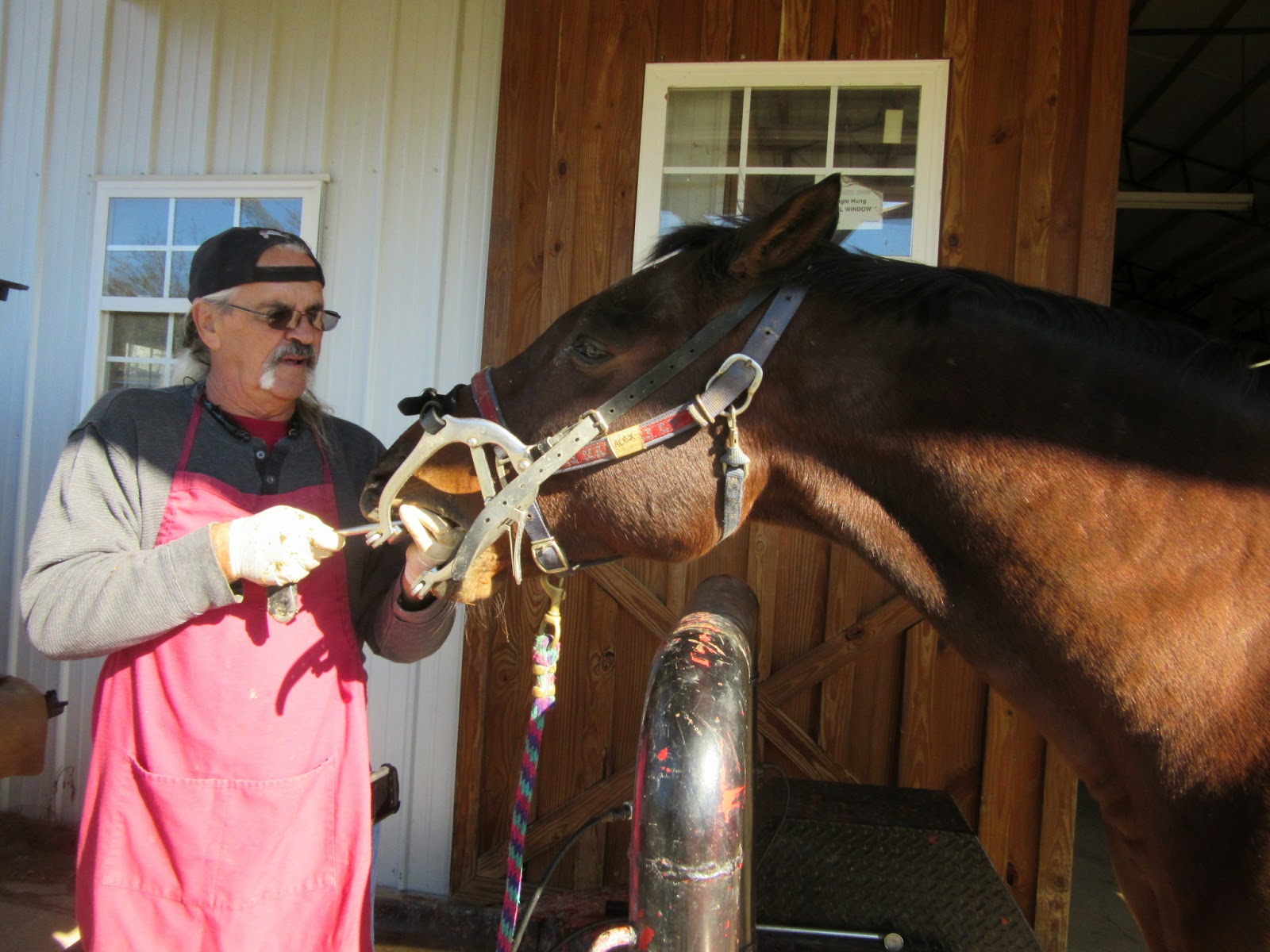 Taco having his teeth floated 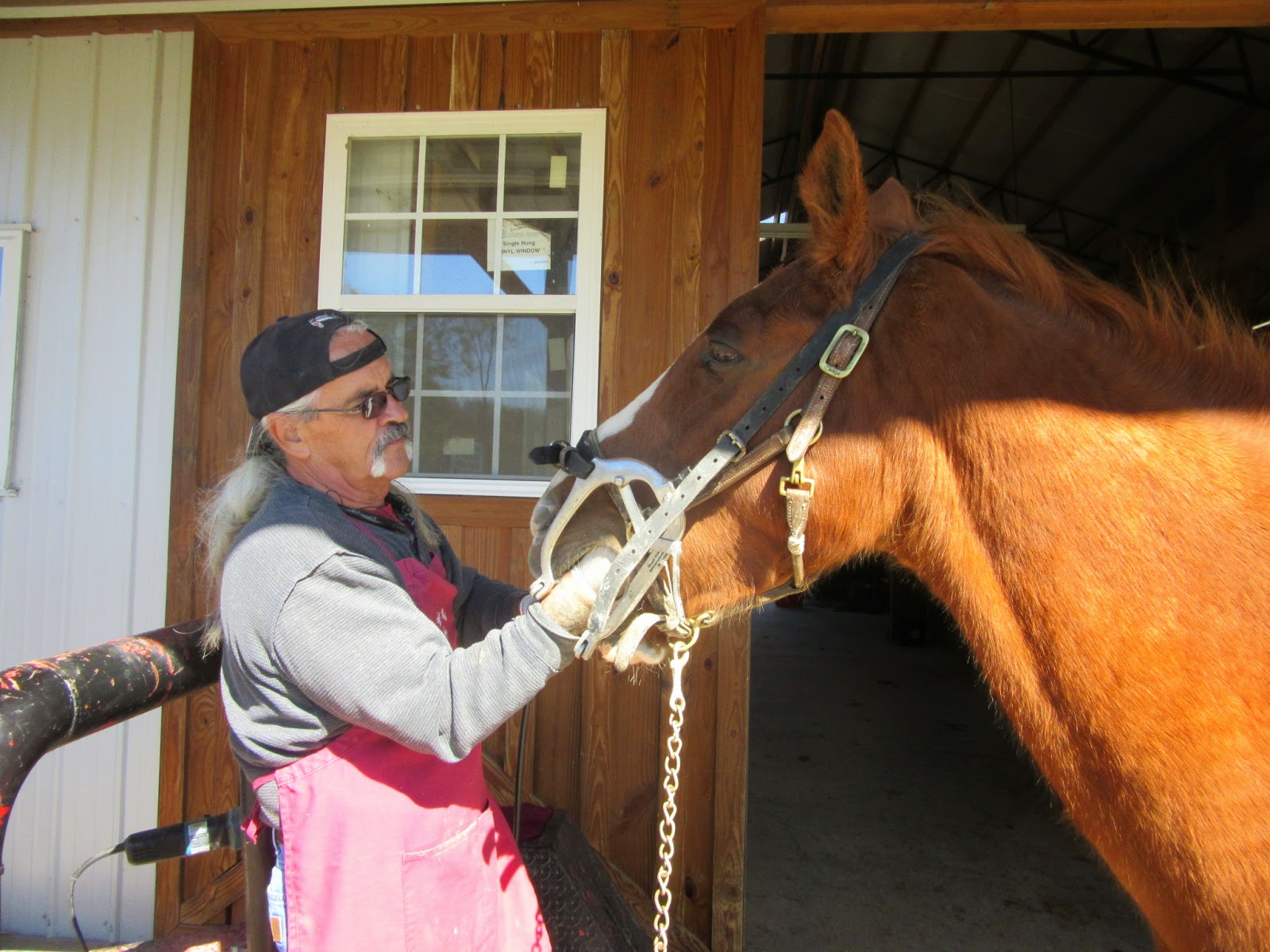 Taco taking a look at the tooth the dentist pulled. It was so loose he pulled it out with his fingers. 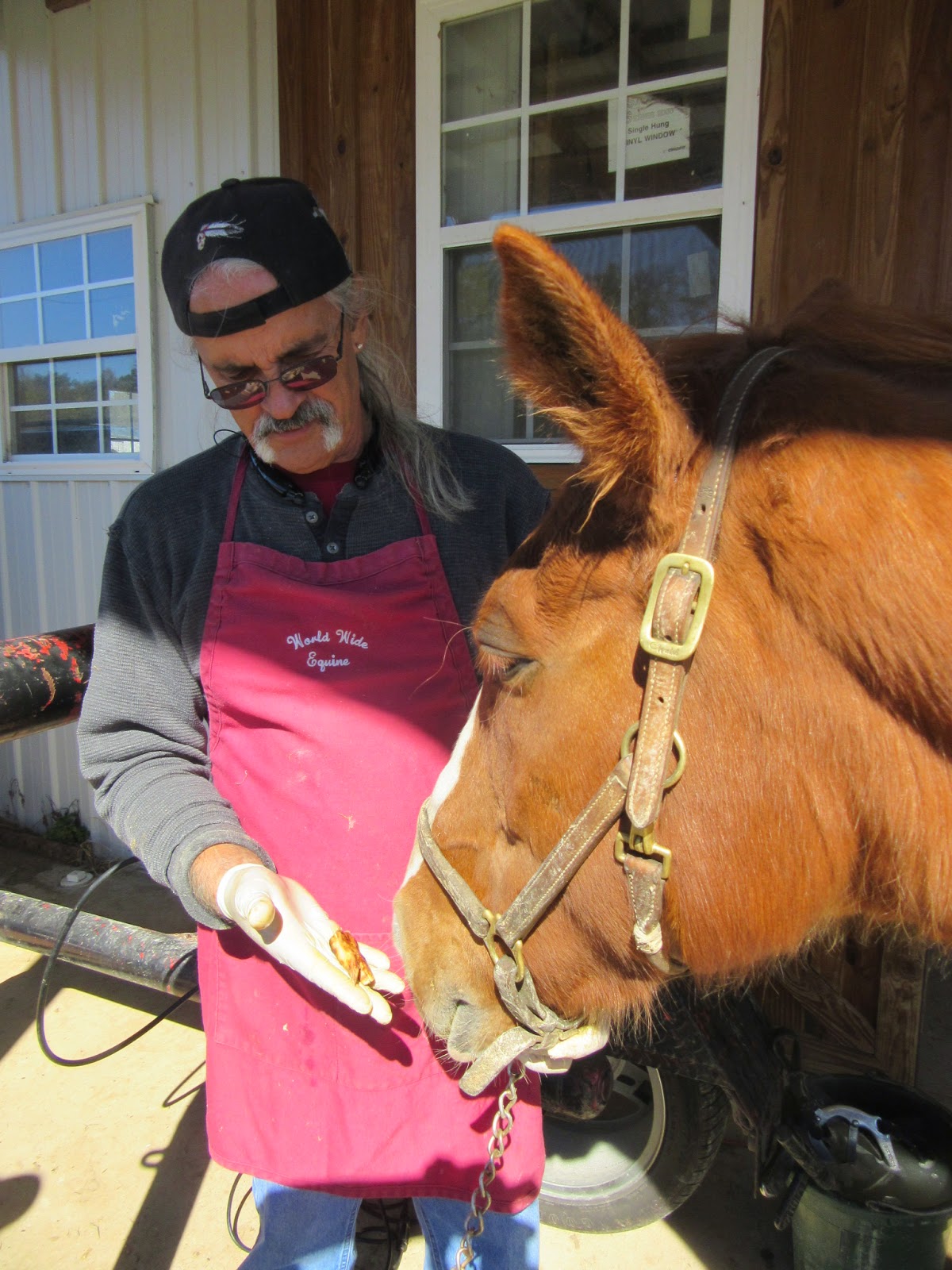 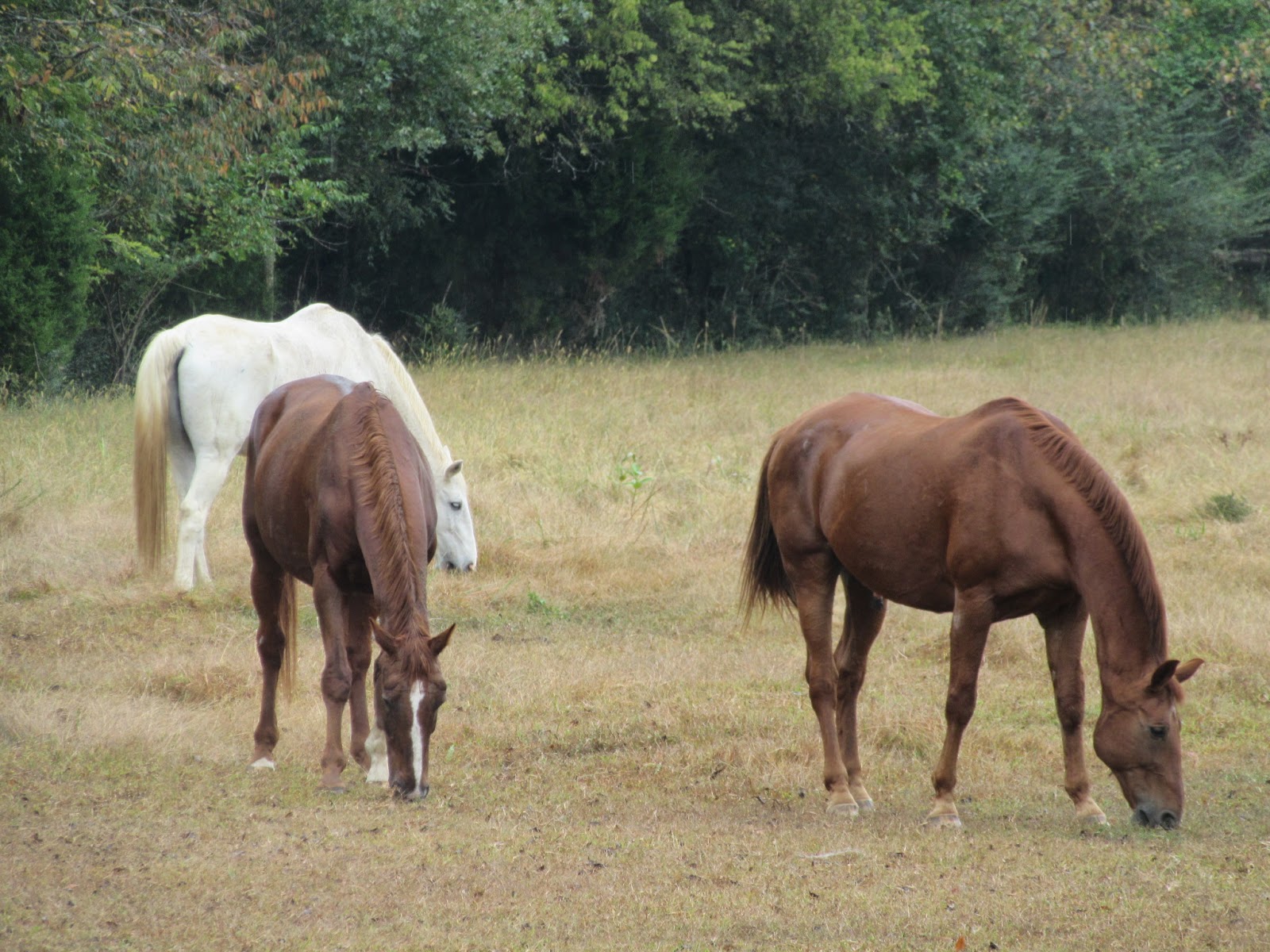 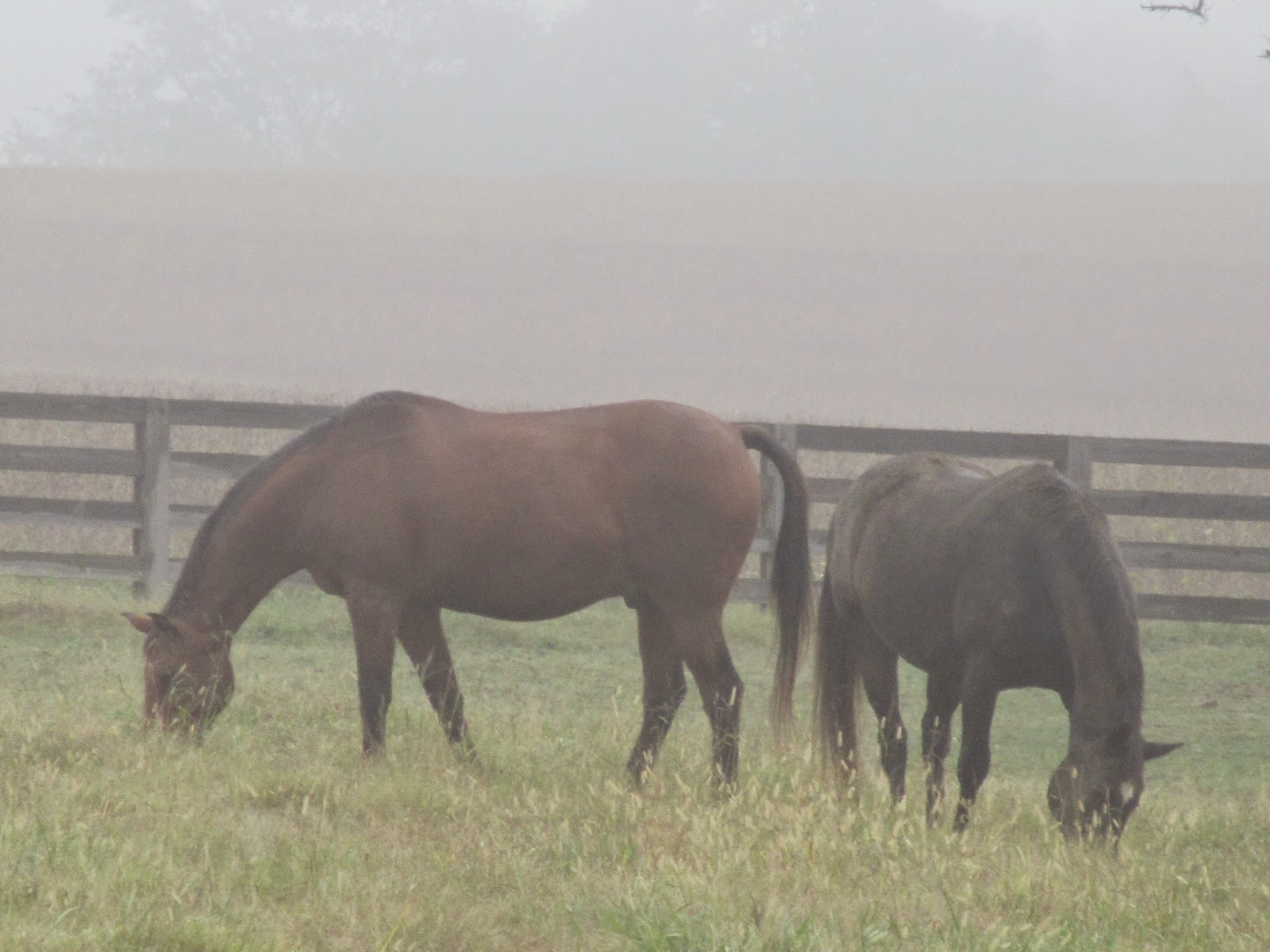 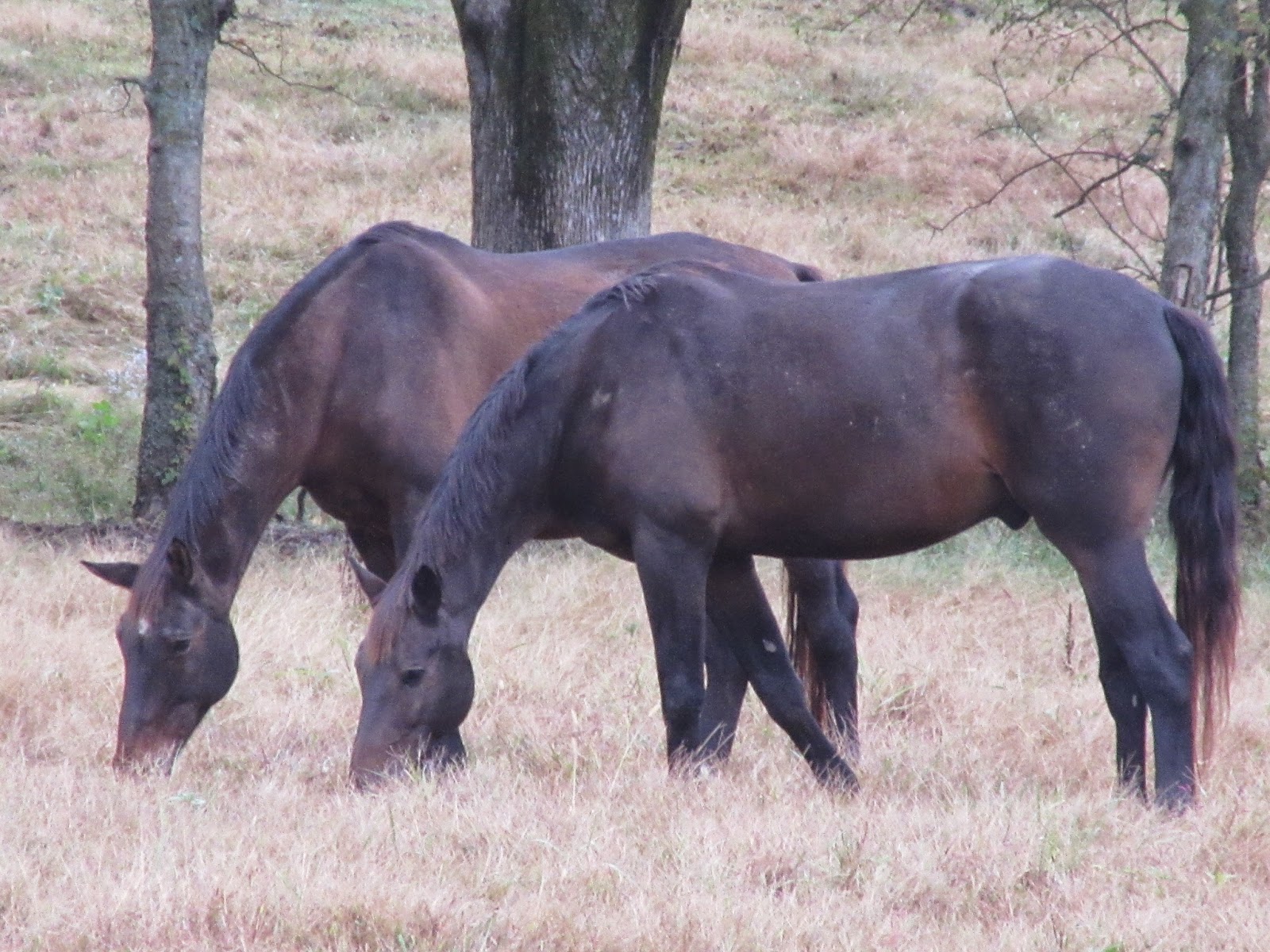 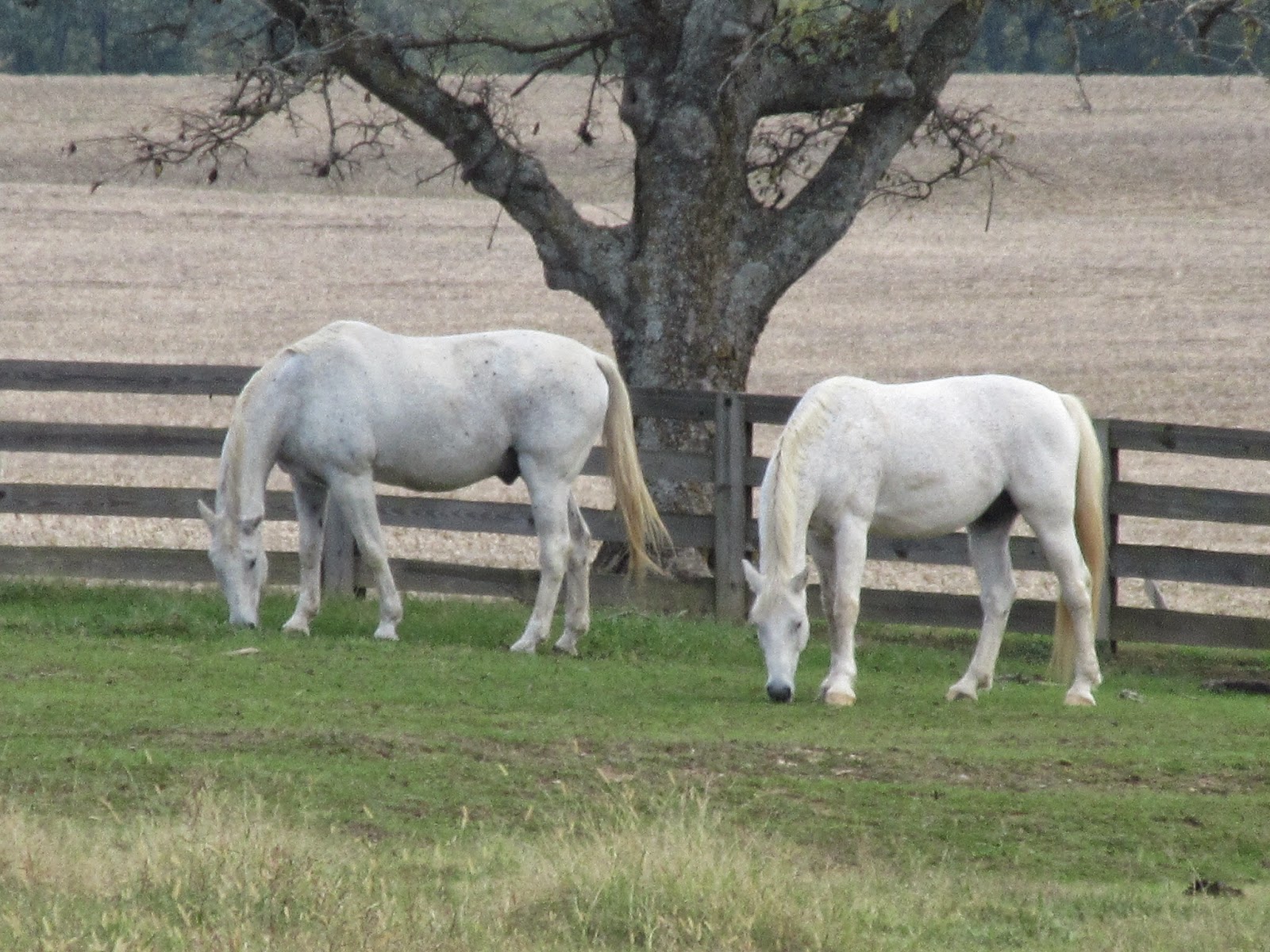 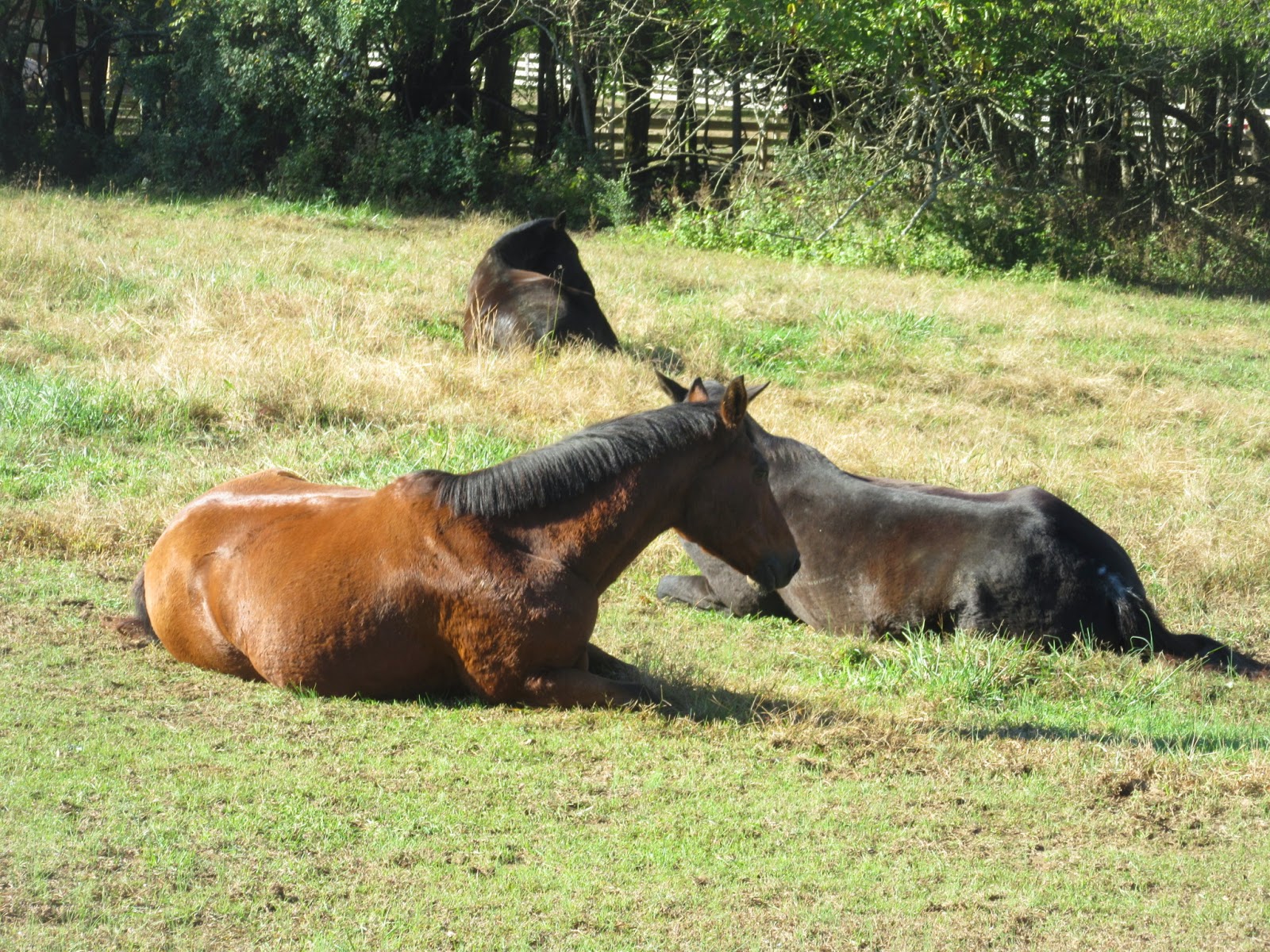 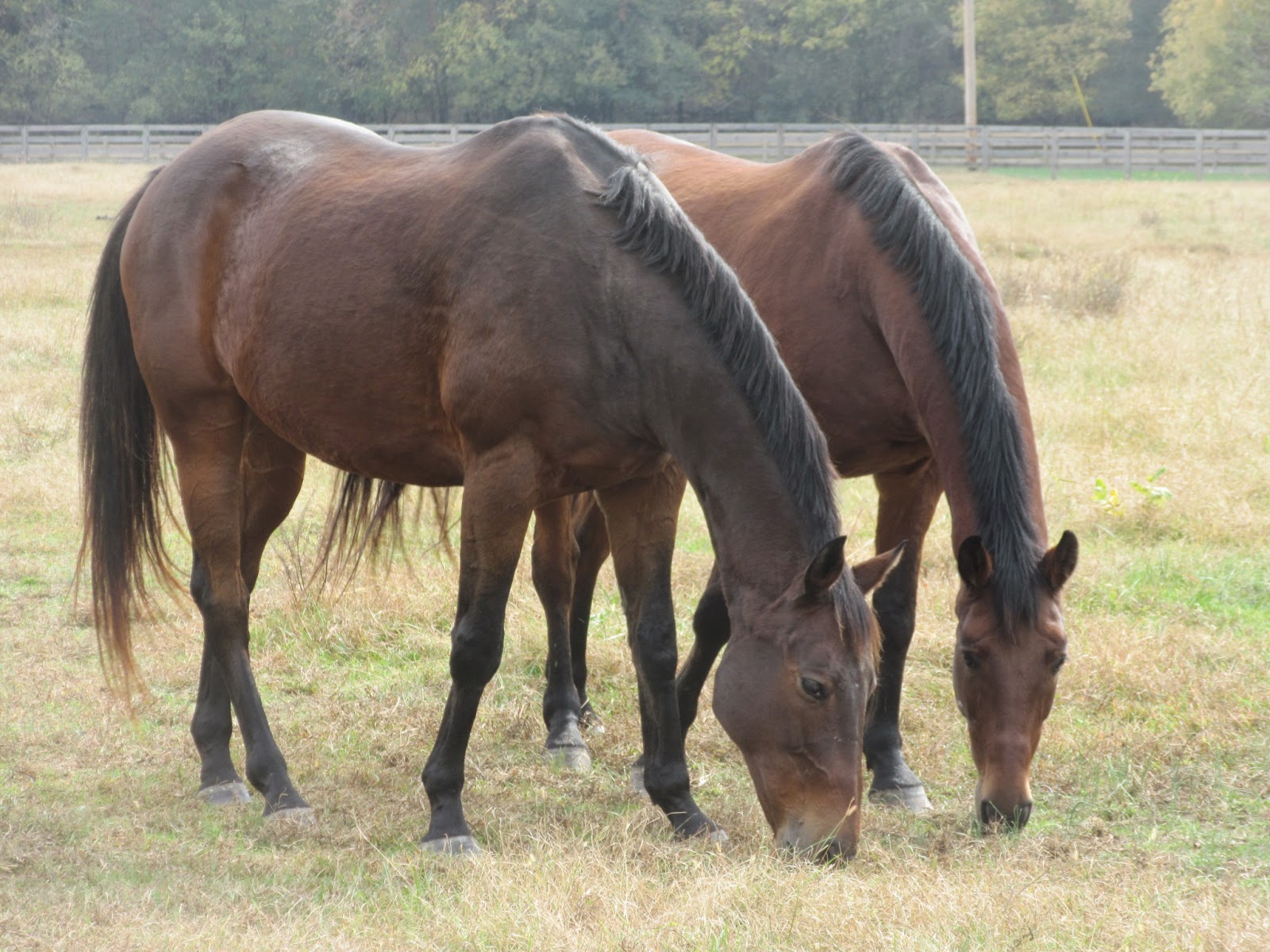 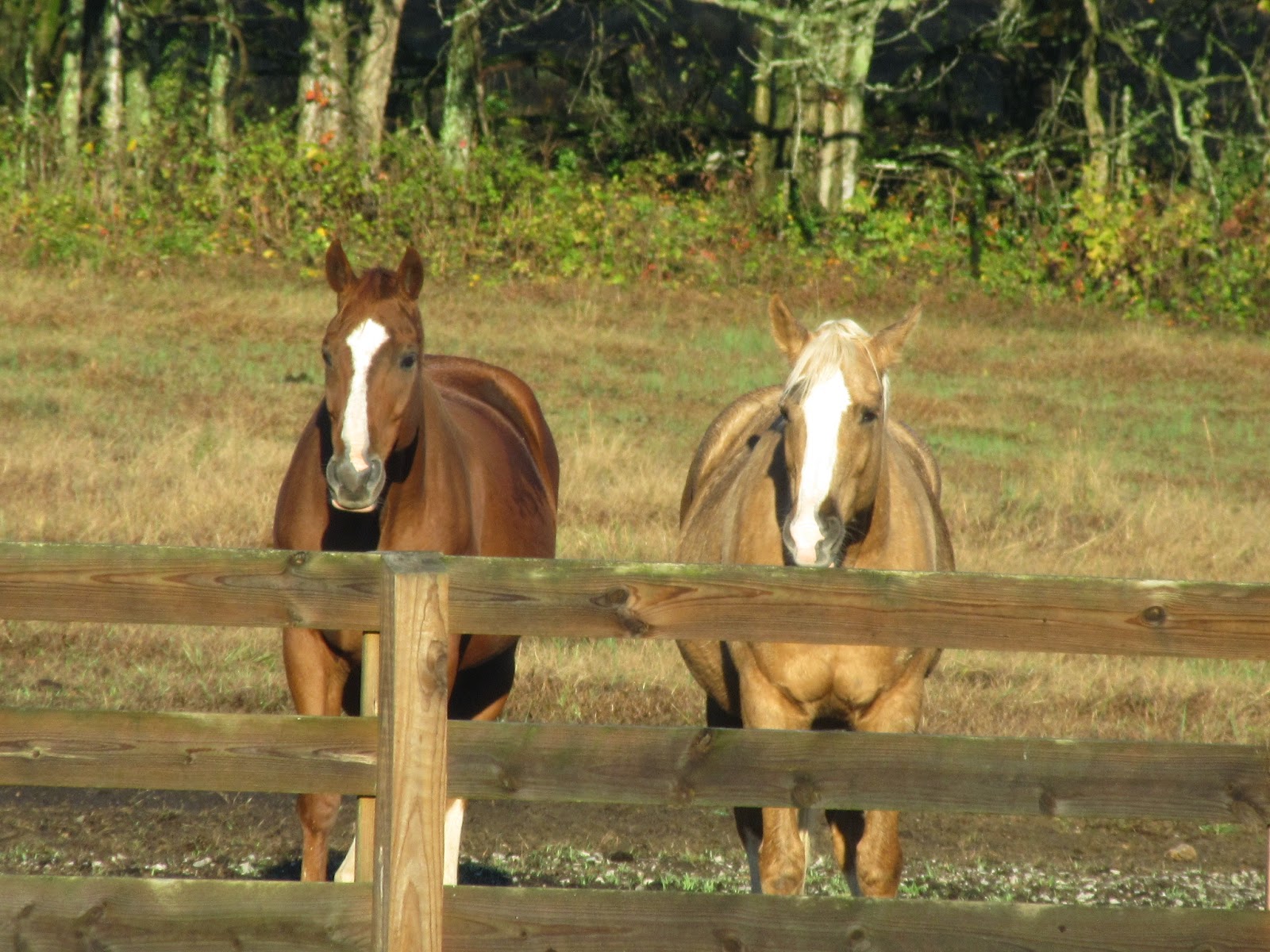 Leo and Chance napping (Trigger and Apollo in the background) 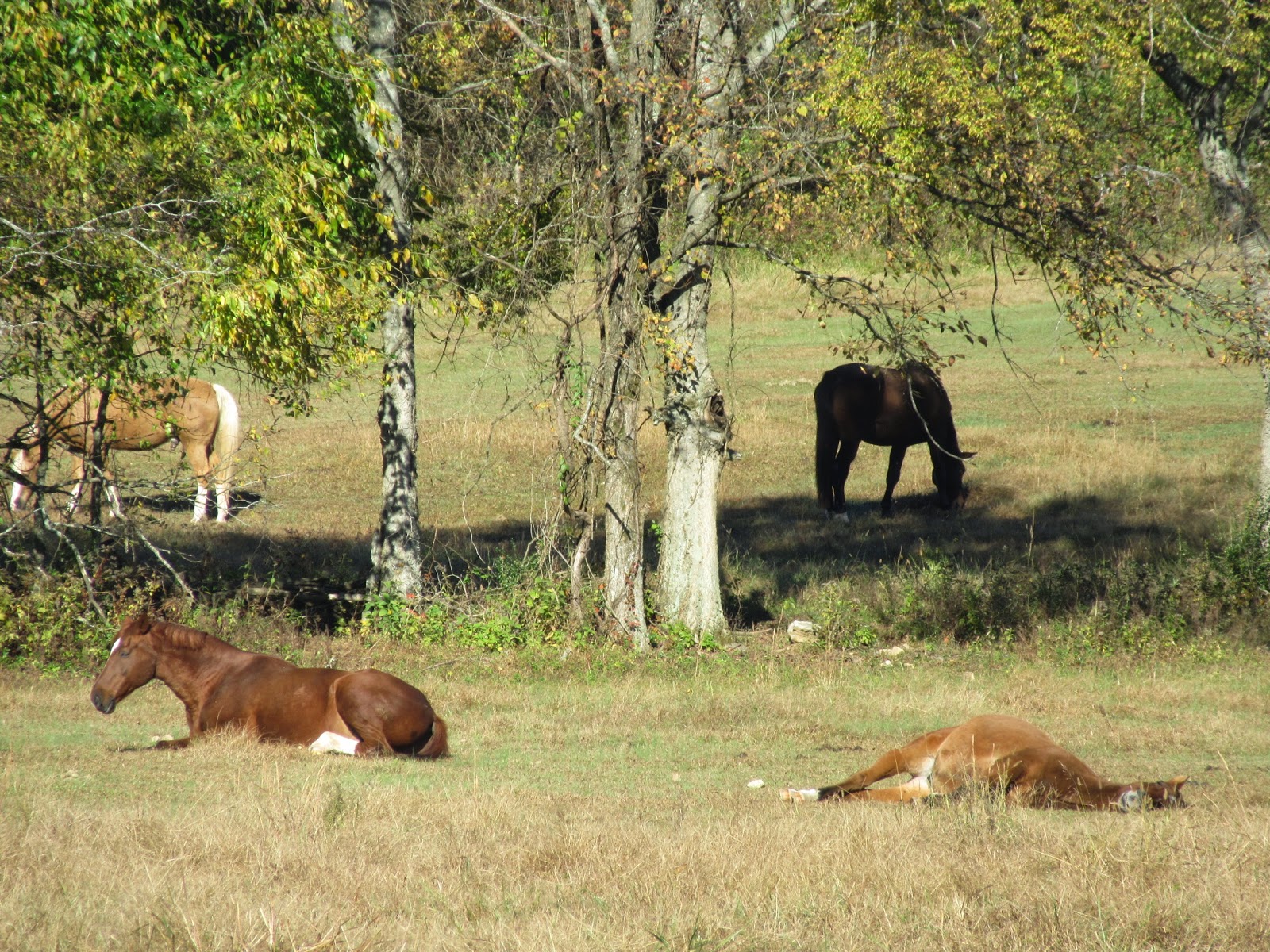 Posted by Melissa-ParadigmFarms at 10:03 PM

My dentist, who is really excellent, generally uses only hand tools, but always uses sedation and a speculum so he can see and reach the back molars. There are a lot of bad equine dentists out there (including vets) ranging all the way from the ones (like your example) who don't do a complete job, to the ones that aggressively overfloat using power tools.

I'm lucky to have found my dentist, and to have a great back up dental surgery team - they do use power tools, but very carefully - no over floating and no over heating the teeth.

Gracious!! I've heard people say they don't float unless there seems to be a problem, but to have problems, float, and STILL have problems? That's crazy. Poor guy! Glad he got taken care of.

So glad that horse got to you guys! If my horse had that many problems still after being seen by a dentist i'd get an x-ray, or 10 and a new dentist or vet and may even learn to float teeth myself. Aughhhhh Can't. Even. Imagine.