A Contrary Farmer's Guide to Manure

(Post by Jason) One of the benefits of being a farmers wife is that Melissa gets to listen to me expound on issues like nutrient management and nutrient cycling at some length, particularly when I'm feeling somewhat contrary as I was for much of today. According to many of my farmer peers and extension personnel I am so old fashioned in my thinking regarding making, storing and applying manure that I am an anachronism worthy of careful and very distant respect. In other words, don't poke the bear because you're probably not going to like what comes out. Literally and figuratively. Believe it or not there is quite a bit of thinking behind making, composting and spreading manure despite the fact that the farmer doing the thinking is wearing bib overalls and a straw hat. Let me share some of my thoughts with you.Every spring we wind up with quite a lot of accumulated manure around run in sheds and hay feeders. This is no surprise since the horses spend most of the non-grazing season standing around the hay feeders eating hay. At this point the manure is intermixed with hay, water and mud and it is bonded together much like wet cement. Because animals have been pressing their weight into it throughout the winter there is very little oxygen in the mix and it's set up and bonded together much like semi solid cement. There is often a slight ammonia smell coming off the manure pack but thanks to our very liberal use of shavings hay and straw even at it's worst it can only be smelled from a few yards away. Manure that smells strongly of ammonia is volatilizing nitrogen into the atmosphere quickly. I believe in capturing that nitrogen and saving it to apply to my plants in slow release form later. Adding carbonaceous bedding material like straw stops nitrogen volatilization and saves it so that it can be used to help plants grow. Since most manure is applied in liquid form today it stinks to high heaven. You can sometimes smell it miles away. Liquid manure is convenient but from a nutrient cycling perspective I much prefer spreading composted solid manure. Conventional wisdom says the best thing to do with manure in the early spring is get rid of it quickly. I understand the notion. But early spring in the mid south is the wrong time to be out spreading manure. The soil here is so wet that it's impossible to spread without tracking up the fields and even when we aren't tracking up fields we are almost certainly compacting soil which excludes oxygen and impedes water percolation...both big no no's for plant growth. So instead of doing this we turn every bit of manure on this farm into piles and begin the process of composting. March is the month we start making manure piles. With the heat and moisture available here in the mid south composting occurs at an incredible rate compared to anywhere along the Canadian border. By mid to late summer our manure piles have turned into light, fluffy, black very rich potting soil. Late July and August are the months we choose to spread solid manure on this farm. It's always dry.....no chance of tracking up the fields. It's also a great time to apply nutrient in this part of the world. The C4 warm season grasses are the mainstay of summer grazing and they will rule for another 60 to 90 days depending on how long the heat persists into fall. At this time of year they need to start accumulating potassium and phosphorus in their root systems to prepare for dormancy. Composted manure is high in these nutrients. Our C3 cool season grasses will begin to grow in late October, just in time to use up the excess nutrients as well as any  slow release nitrogen left over when the C4 grasses senesce. In the natural world nutrient cycling is a zero sum game and a closed system. In very simple terms what happens is that growing plants remove nutrients from the soil,  animals eat the plants using plant nutrients to grow, animals excrete excess nutrients back into the soil and eventually the animals die and compost, returning virtually all the nutrients they removed from the soil by eating plants in the first place. Again, in very simple terms, farming is always an open system because the purpose of farming is to remove nutrients from the soil in one form or another and use them. If we continually remove plant materials or harvest animals from a piece of ground without replenishing ALL the nutrients said plants and animals remove eventually the soil will become sterile and will fail to grow anything. We can slow the process down by harvesting animals and returning their manure to the soil but sooner or later we have to replace all the nutrients we remove. On this farm we "sell" our grass to the customers who board horses with us. We spread manure back onto the soil but if all we did is sell our grass then just spreading manure still results in a net loss of nutrients from the soil over time. Fortunately we also import considerable nutrients in the form of grain that we buy.......140,000 lbs worth last year. The excess nutrients from the feed we buy, excreted through the horses, composted and spread helps to balance the system and ultimately make it sustainable. But that's not good enough either. In my opinion it's wise to try to build nutrients in soil over time. To do this, we buy and spread several tons of commercial fertilizer every year.

Many horse farms have no choice but to have their manure hauled off. The ratio of the number of horses as compared to the land base is out of balance enough that it isn't practical or feasible to compost and spread all of the manure. The same is true of many commercial chicken, cow or hog farms. This contrary farmer is happy that he is able to put accumulated manure back into the soil. 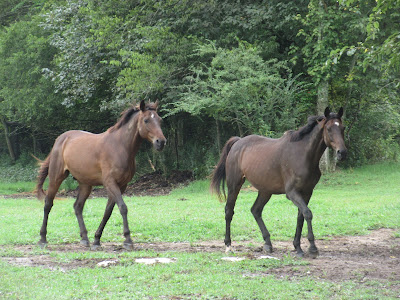 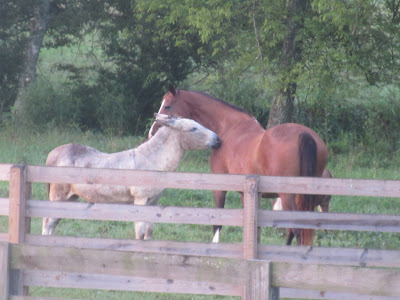 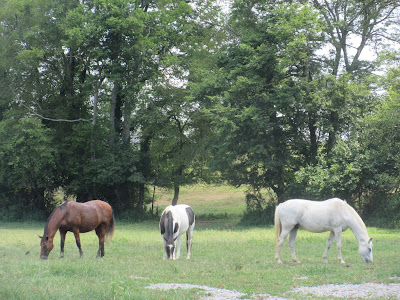 Jason servicing the bushhog after another round of mowing pastures 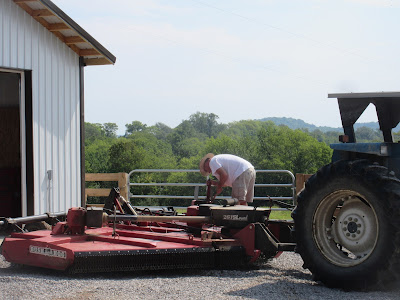 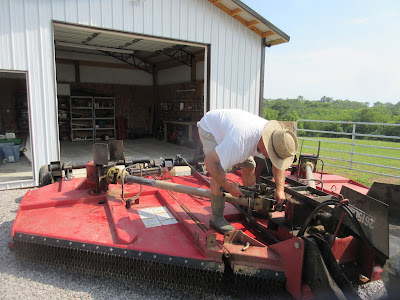 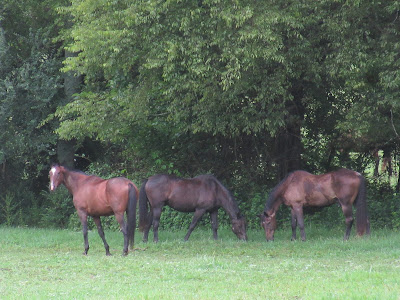 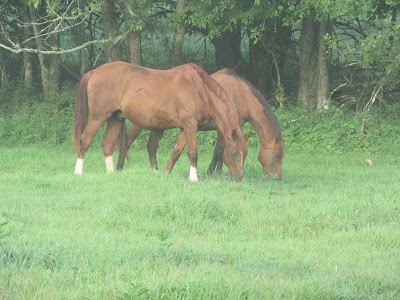 Hemi and Apollo in the front, Traveller and Maisie grooming in the back 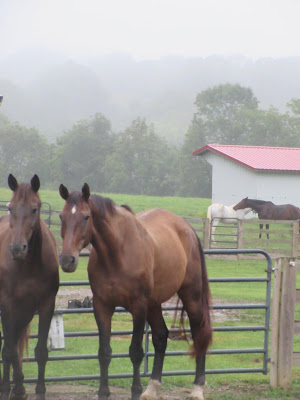 a closer look at Traveller and  Maisie 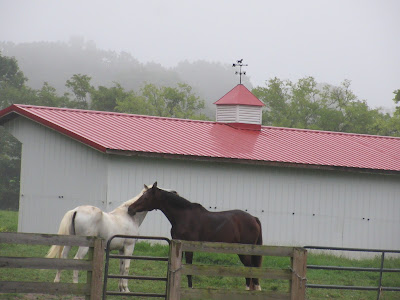 None of the three expressions in this picture look thrilled to be waiting for the farrier. Moe carried on with grazing, Jason looks bored, and Levendi is looking for an escape route. 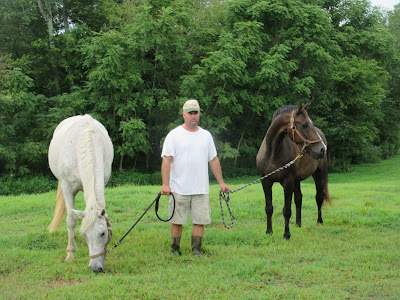 Trigger offered to carry some halters for me 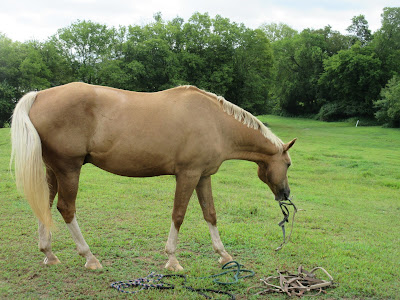 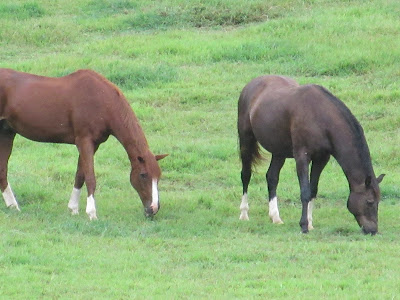 the progression of a very pretty sunset over the farm 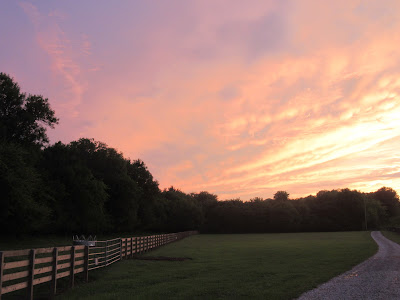 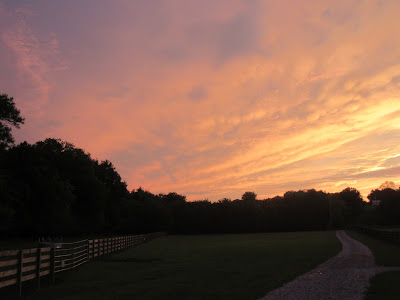 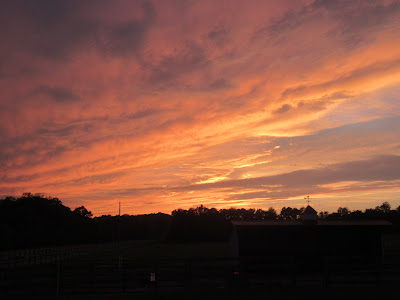 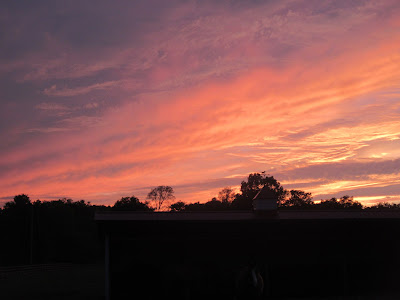 Posted by Melissa-ParadigmFarms at 8:55 PM

I love this, and although I lack the scientific knowledge that you possess, the concept seems sound to me. My grandparents were big on returning to the soil what you took from it, so the manure went back to the fields, and the kitchen waste went back to a fallow area in the garden. As a backyard horse owner and gardener, I cherish my composted horse manure. It goes on the gardens through out the summer. We have dumped tons of manure and shavings, but the pile gets used and composts down. The pile sits for a year before "harvested" for the garden. We alternate between two piles, dumping on one while digging out of the other. When we think about moving, I wonder if I can move my manure pile!