(post by Jason) As most of you know I grew up in rural Central Ontario. When the days start to (finally) get above freezing and late winter begins to think about turning into early spring a significant fraction of the rural populace in that place starts tapping maple trees  and boiling off sap to make maple syrup. The Latin name for sugar maples is Acer Saccharum, and this will be important to remember shortly. What does this have to do with horses? Stay with me for a few paragraphs.

A lot of people up home tap maple trees commercially; it’s not unheard of for larger commercial operations up there to tap thousands or tens of thousands of maple trees. In some cases they also buy sap from other sugar bushes and boil it off to make syrup.  Since something like 95% of the world’s supply of maple syrup comes from the Provinces of Ontario and Quebec it’s a real business. Quebec even maintains (yes, really) a strategic world reserve of maple syrup in an effort to keep world prices up. No kidding.

If a lot of people make maple syrup commercially an awful lot more make it for themselves or for their friends and neighbours. I don’t know what percentage of the rural population falls into this category but it’s a significant fraction. If you said 25% of rural dwellers up there make at least some maple syrup you probably wouldn’t be far wide of the mark. It’s the first rite of spring, and I have a lot of fond memories of pancakes in the sugarhouse and eating super fresh maple toffee made by pouring congealed hot syrup directly onto the snow.

When I moved to middle Tennessee I was seriously disappointed to learn that the percentage of rural dwellers making maple syrup was 0%. I’ve since learned that it’s some small way above 0% but not by much. I learned that we were at the very bottom of the natural range of the sugar maple, but I was heartened to learn that although there were only a few native sugar maples in the area there were at least SOME maples big enough to tap.

A couple years ago in December one of our neighbours was talking with some animation about a trip he took to New England in the spring time and how much he loved maple syrup. I lamented that I’d love to make some syrup but that our 200 acre farm had exactly zero maple trees on it. His eyes lit up and he said he knew there were at least some maples on his 600 acres and did I want to come over and have a look with him? We found nine maples scattered about his land. A long story short I put taps in the trees the very next week. A few weeks later I made just shy of 2 litres of syrup from 80 litres of sap. This year I did it again, except this time I made 3.5 litres of syrup from 200 litres of sap.

Since I am one of the only maple syrup makers in the state of Tennessee many of my friends and neighbours have expressed some interest in learning more about the process. One of the questions I got asked ( I think to stump me) was the Latin name of sugar maples. That’s easy. It’s acer saccharum.

Last fall Melissa went on a bit of a horse buying spree. I blame most of it on a friend of hers I refer to by her last name only, I won't tell you the name of this "friend," but the initials in her last name are Romanelli. Ahem.  To say that I was not on board with this horse buying spree would be an understatement. . Melissa's natural inclination is to think all horses all the time, and somehow this leads to her thinking it is a smart thing to own all of the horses.

You might remember that Melissa bought her perfect paint mare Flower in fall 2017. Even I must reluctantly admit that Flower is pretty close to a perfect horse. I've had almost no bizarre discussions with Melissa about Flower. Whenever I ask her how her ride on Flower was on any given day I hear some variation on perfect. Really, she could just say the word perfect and end the conversation, but instead I usually get a 20 monologue on the perfectness of Flower. I zone out and try to smile and nod at appropriate times. In the past I often had to endure many tearful conversations with Melissa about riding her horse, with more like hour long monologues about her horse being unhappy or unsound or un-something. It drove me crazy to watch her spend unseemly amounts of time and money and seem to be worried and unhappy, but conversations with other horse husbands have made me realize this is a common thing in the horse world. Hearing about nothing but Flower's perfection was a nice change.

Then I heard that Flower had a full brother and that was when things started to go downhill. In the beginning Melissa made, in my opinion, reasonable responses when Romanelli first told of her of the existence of a full sibling to Flower. This full sibling was only a weanling at the time, and Melissa was temporarily in a sound state of mind when it came to her own horses, and smartly said that she didn't want a weanling. I was stunned and almost incoherent when the first conversation we had about Flower's full brother was that Melissa thought it wasn't smart for her to buy a weanling. For once we had the same perspective about her horses and all of my usual rebuttals, refusals and counterpoints were unnecessary.

I should not have been joyful, and I should have known not to let my guard down when it comes to Romanelli. Whenever I see Melissa furiously texting with anyone with her back turned to me I know, almost without doubt, that she is texting with Romanelli. Fast forward to the fall and Melissa and I are driving on I-65. She was madly texting and I didn't even have to ask who it was. I asked what Romanelli wanted, and apparently Romanelli was re-pitching the idea of buying Flower's full brother who was now just turning one year old. I was again stunned and almost incoherent when Melissa said she had once again said she didn't want such a young horse.  We continued our drive on the interstate and I enjoyed a false sense of happiness.

An hour later Melissa was madly texting again, this time with a bit of a manic look about her. I said, "what does Romanelli want now." To my complete shock she looked at me and said, "I just bought Flower's brother and he's going to go live with some broodmares at Romanelli's farm." We almost died when I came perilously close to hitting the guardrail due to my state of shock. I had a hard time forming coherent sentences. "But you said . . . But you didn't . . . We didn't discuss . . .We don't have a place for a yearling!" Apparently Romanelli had made a ridiculously low offer for Flower's brother, and his owner said she would take it if the horse was picked up the next day.   The nameless colt lived over two hours away from us, and Melissa disappeared for most of the day the next day as she and Romanelli went to pick up Flower's brother. Acer lived at Romanelli's farm for the last several months, and Melissa said she did this so that I wouldn't have a daily reminder of yet another horse that she bought. Apparently Melissa recently decided my mental health was not as important to her anymore, because Acer appeared in Flower's pasture a few days ago.

Romanelli originally suggested naming the horse Acer to try and give him a Canadian link in a half hearted attempt to appease me. Last night on Facebook I was talking about various types of maples when the subject of Melissa’s horse Acer came up. I volunteered that we did indeed have a new species of maple here on the farm, Acer Equus. In a rare bout of appeasement Lauren suggested this should be his show name and Melissa readily agreed. The world needs to look out because a new species, Acer Equus (Maple Horse) is here. 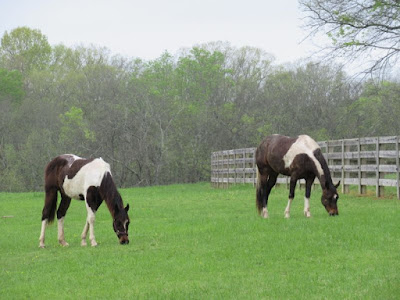 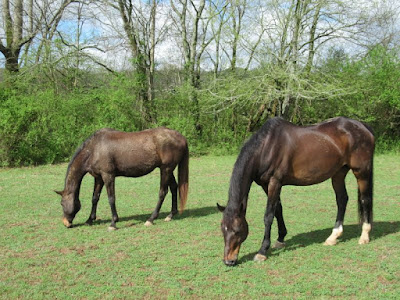 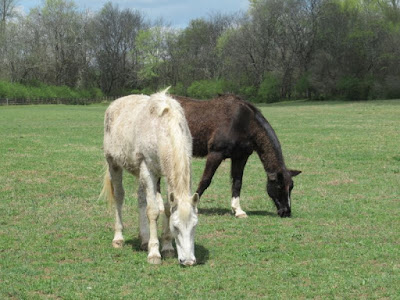 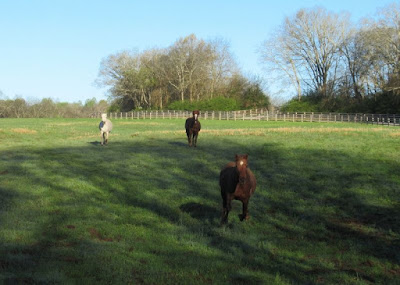 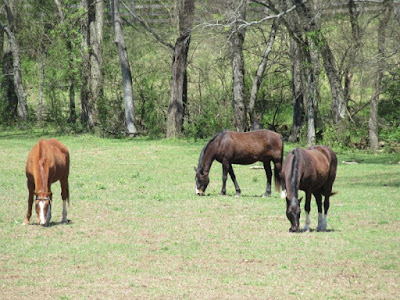 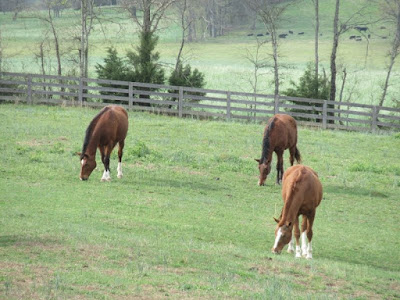 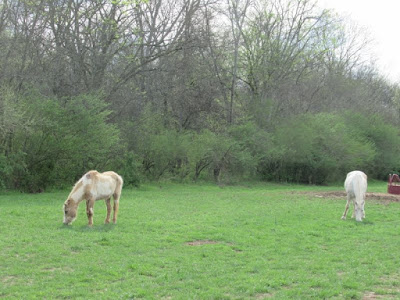 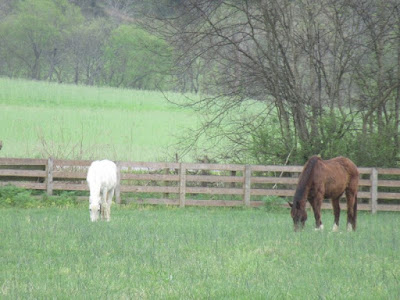 Penny and Maggie having a grooming session 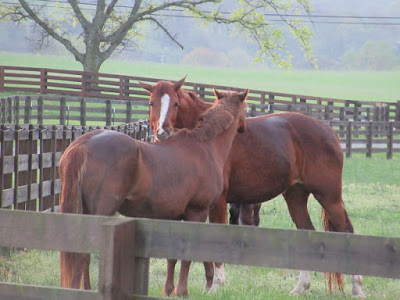 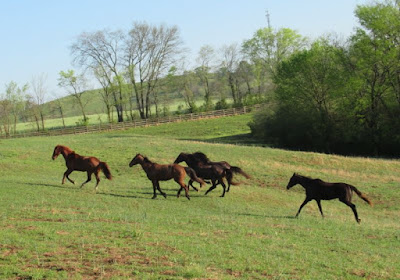 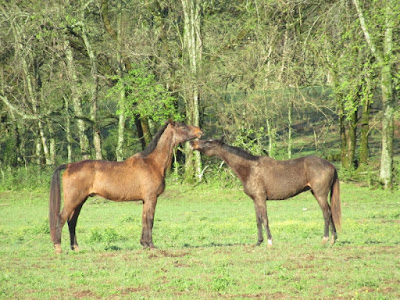 King saying to Trigger, "Play with me! Look at me!!" 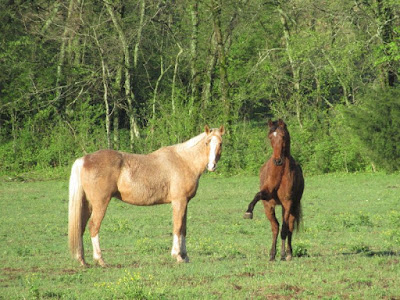 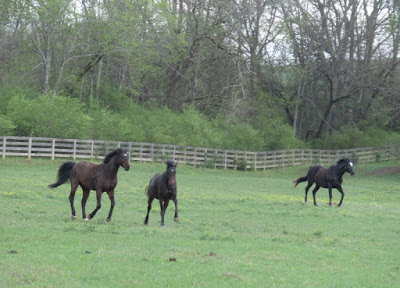 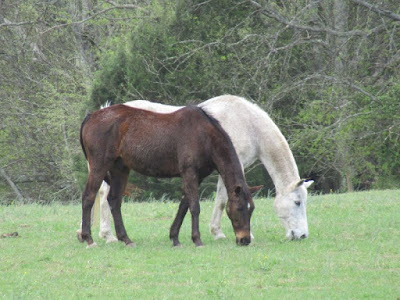 Posted by Melissa-ParadigmFarms at 6:32 PM