Another Project Involving Trees and

chainsaws, except I didn't have to participate!! I have a shed in the middle of a few of the pastures with feed bins and where I store blankets, halters, grooming supplies, etc. There were a couple of dead trees, one fairly large, next to the shed that needed to be dealt with. Since we could work away with our chainsaws for a year just trying to clean up trees that have already fallen over we were having a hard time getting excited about pulling over even more trees.

On top of that Jason and I are notorious for having a million unexpected problems occur when we are working away at our home/farm improvement projects. I just knew if we tried to pull the tree closest to the shed over we would end up flattening the shed and ourselves in the process. We almost tackled it ourselves, and even had the trusty Kubota utility vehicle loaded up with chain saws, rope, and a logging chain. We put the bucket back on the front loader of the tractor and had it ready for service. Finally one of us (me) heard the voice of reason that was desperately trying to tell us this was a bad idea. So I called a tree service and happily took pictures while they dealt with these two trees. Of course since Jason and I were only bystanders everything went perfectly and it didn't even take very long. 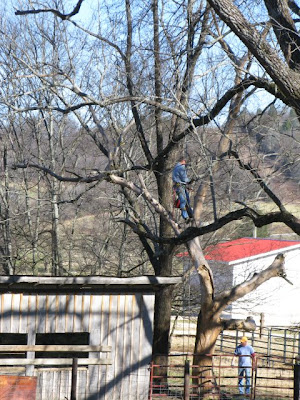 Standing on the dead tree to do some limbing; it made me nervous every time he did that 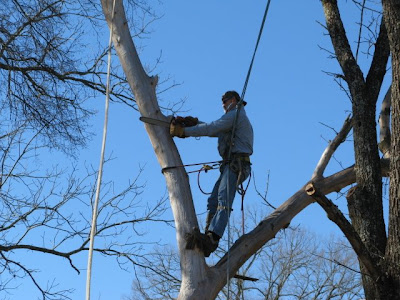 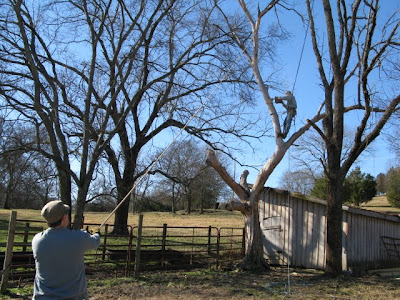 Swinging back to the live tree; he climbed the live tree and then would swing over onto the dead tree to cut off limbs. What really impressed me was when he would just hang in the air and stabilize himself with one hand on his rope and cut down limbs one-handed with the chain saw in his other hand. No way could my little arms handle a chain saw one-handed!! 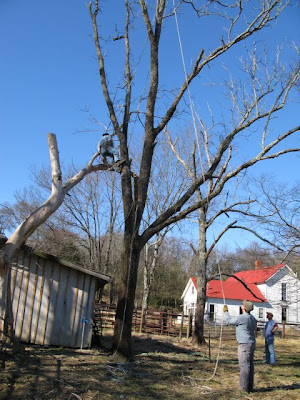 Finally taking down the trunk 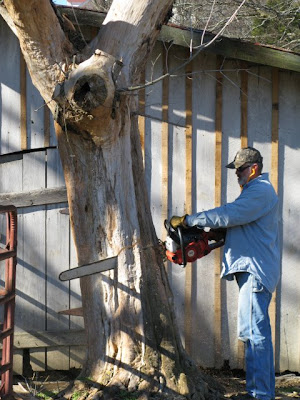 Cutting his way through 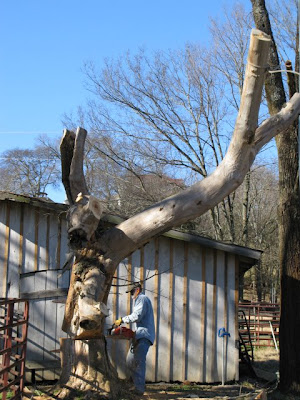 Yeah! The dead tree is down, my shed is no longer in danger of being flattened, and I only had to watch. A perfect day! 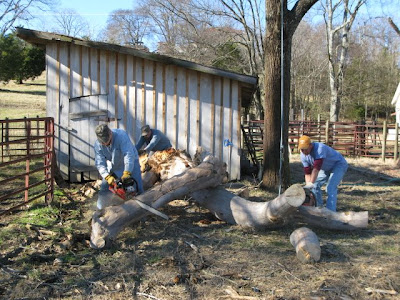 Now taking down the other tree. This one was easy, no big limbs and branches. Jason and I could have easily done this one ourselves but they were here and I liked this no participation concept a LOT. 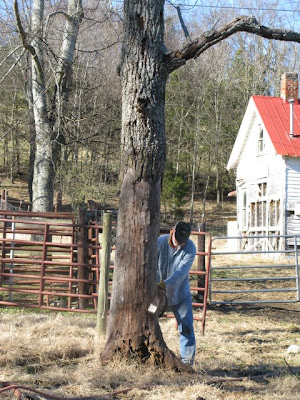 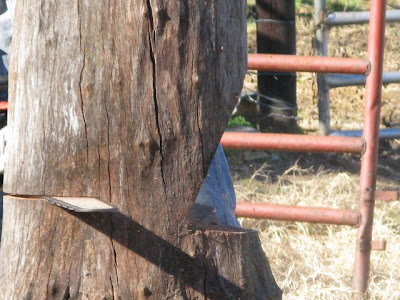 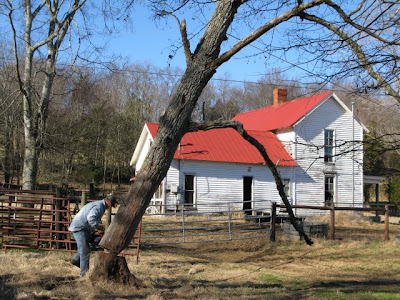 Posted by Melissa-ParadigmFarms at 10:01 PM

Yay! I am glad that you guys got that tree taken care of!

It's so much nicer to just be able to watch professionals take care of things like that. You are totally right. That one law always apply when we do big jobs ourselves and it probably would have turned into a three day project. lol thankfully it got done without much ado.