I just finished reading the book "Three Cups of Tea." It was such a powerfully moving book about one man's extraordinary accomplishments I felt compelled to write a bit about it. Of course I am late to the party reading this book as it was originally published in 2006 and has been a number one best seller since then. I tend to get behind on my reading!

Anyway, reading this book about made me reflect on my contributions to society and the world in general. Quite frankly it made me think about the fact that my contributions in those regards are minimal at best. It isn't the first time I've realized this but it has been awhile since I was reminded of it. I lead a rather self centered life caring for amazing horses and being blessed to live on such a beautiful farm. I essentially contribute nothing towards improving the lives of others and leaving the world in a better state in which I entered it. Sure I give to charities and especially to some horse rescues, but I don't exactly devote my life to pursuing the greater good.

In Three Cups of Tea I read about how one very ordinary guy, a mountain climber named Greg Mortenson, is doing more to change the world and improve the lives of people than one would have ever thought possible. To save myself some typing I've copied and pasted the below information from the website www.threecupsoftea.com :

"In 1993 Mortenson was descending from his failed attempt to reach the peak of K2. Exhausted and disoriented, he wandered away from his group into the most desolate reaches of northern Pakistan. Alone, without food, water, or shelter he stumbled into an impoverished Pakistani village where he was nursed back to health.

While recovering he observed the village’s 84 children sitting outdoors, scratching their lessons in the dirt with sticks. The village was so poor that it could not afford the $1-a-day salary to hire a teacher. When he left the village, he promised that he would return to build them a school. From that rash, heartfelt promise grew one of the most incredible humanitarian campaigns of our time.

In an early effort to raise money he wrote letters to 580 celebrities, businessmen, and other prominent Americans. His only reply was a $100 check from NBC’s Tom Brokaw. Selling everything he owned, he still only raised $2,400. But his efforts changed when a group of elementary school children in River Falls, Wisconsin, donated $623.40 in pennies, who inspired adults to begin to take action. The 283 foot Braldu Bridge (pictured above) was completed in 1995 and the Korphe School (left) was completed in 1996. Since then, he’s established 81 schools. In pursuit of his goal, Mortenson has survived an armed kidnapping, fatwas issued by enraged mullahs, repeated death threats, and wrenching separations from his wife and children. Yet his success speaks for itself.

Several bi-partisan U.S. Congressional representatives nominated Mortenson for the Nobel Peace Prize this year. The award recipient is chosen by a secret process and announced in October.

The book has been read by General David Petraeus – CENTCOM Commander, Admiral Mike Mullen - Chairman Joint Chief of Staff, and Admiral Eric Olson – SOCOM Special Forces commander, and several other U.S. military commanders who advocate for building relationships as a part of an overall strategic plan for peace. Mortenson has addressed the National Defense Senior Leadership Conference at the Pentagon, visited over two dozen military bases, NORAD, and been to the Air Force, Naval and West Point Academies."


According to the postscript in the book he's built 81 schools in remote areas of Pakistan and Afghanistan as of 2009, and all of them educate both girls and boys. What I found most interesting in the book is how Mortenson describes the way in which the Taliban and groups like Al-Qaida have managed to recruit and grow their memberships (keep in mind I am extremely simplifying this description). They build "schools" in these incredibly remote, extremely impoverished regions where education is essentially non-existant. Except the schools teach the extremist Muslim views and encourage hatred of Westerners, and provide no education as far as traditional schooling such as mathematics. So they basically educate and grow their membership and infiltrate their extremist views into generations of a family through this approach., families who would have otherwise never embraced these ideologies. Mortenson's approach is to build schools that provide a balanced education, make no effort to teach any religious views, and especially encourage the education of girls as well as boys. Hence the subtitle of the book: "One Man's Mission to Promote Peace . . . One School at a Time."

I found the book to be very inspiring and prove that an ordinary person like me can do amazing things in the world. You can make a contribution to Mortenson's nonprofit organization at www.ikat.org . I made a nice contribution, I felt it was the least I could do. Now that I've put my philosphical musings for the day in the middle of a blog devoted to retired horses I think it is time to move on to some pictures!

The big boys taking a run through the pasture 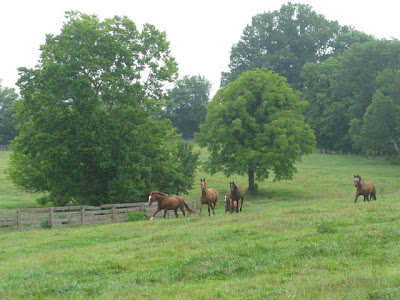 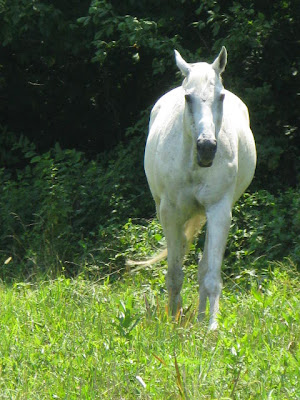 Chili in the shed; I had to take a picture of the shed in use! 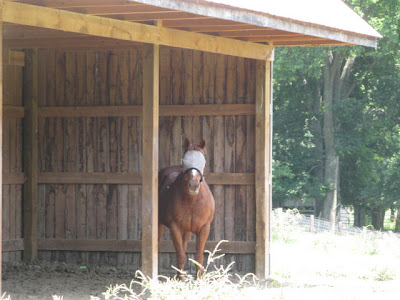 Snappy, Slinky and Lucky in the foreground with Asterik and Sebastian in the background 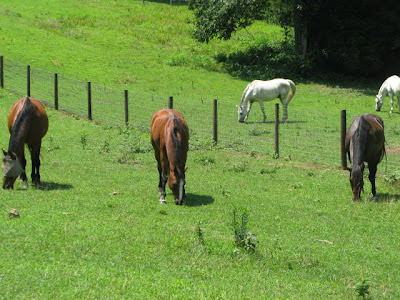 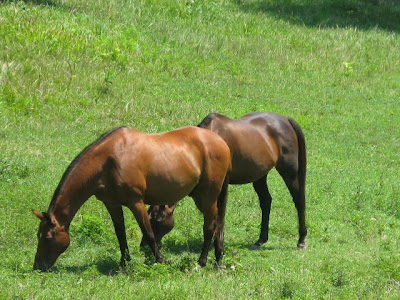 Missy and Buffy were grazing while Harmony and MyLight were napping 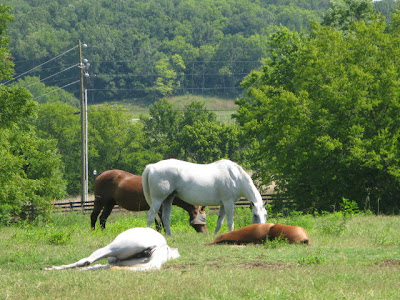 My presence disturbed the nappers so they got up 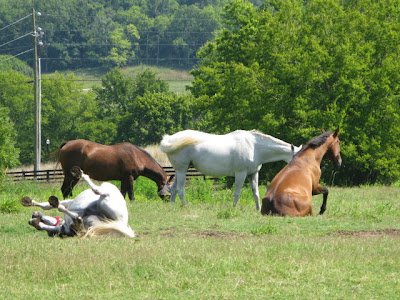 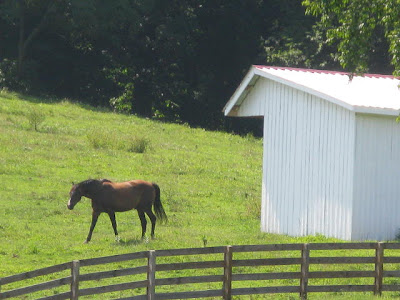 Homer, Leo and Elfin right next to each other, and then Tony 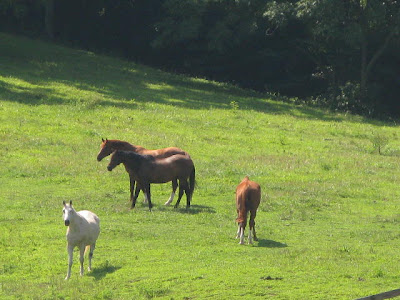 My view as I was walking down the hill one morning; Cuffie, Lily, Missy, Buffy, MyLight and Harmony 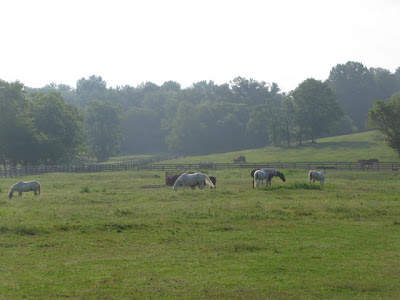 Posted by Melissa-ParadigmFarms at 9:16 PM

Email ThisBlogThis!Share to TwitterShare to FacebookShare to Pinterest
Labels: off the farm

Three Cups of Tea is *such* a amazing book. .

Thanks for the pictures, as always! Can't get enough pictures of happy horses.

Haven't read the book, although I've seen it - I'll have to look it up - thanks for mentioning it!

I guess you give back in that you give these horses an amazing retirement and their owner's an alternative that they can feel good about and still continue to ride and show.

thanks...i think we all U.S.A. could take a cup of tea from this ;];] as for you dressager has made a great point;];];] you probably contribute alot more than 3/4 of the pop. just remenber action speak louder than words..if you feel the need to do something special..i would suggest go hug your hubby and give him a dozen roses ;];] and a nice massage and an deeply appreciative card ;];]not many woman that are horse lovers are so fortunate to have a hubby as you do ;];];]you are truely blessed ;];];] and thank GOD ALSO ;];]for your health and well being and al the fortunate things you are able to accomplish every day ;];];

Melissa, you accomplish so much and you help a lot of people and animals. Everything is relative...I too often have those feelings that I do not give or accomplish enough for the betterment of mankind. Just please know that you do help and make a big difference in at least two lives: mine and Apollo's.