Having driven around middle Tennessee the past few days for various work assignments that involved significant local travel, I think it would be impossible to overplay the size of the area that was impacted with last weekends’ substantial rainfalls. Much of eastern Arkansas, North Mississippi, North Alabama, Western and Central Kentucky as well as all of West and Middle Tennessee were affected to some extent by our record setting wet weather. Your continued thoughts and prayers for the many misfortunate souls that were affected this weekend are most welcome.

As Melissa posted previously, other than having to broil rather than grill our steaks we suffered no negative impacts this weekend at all. None of our buildings suffered any damage. Our driveway and roads are fully intact. With the exception of about an acre down at the road on the farm where we currently live, there is no flood plain on either of our farms. Water won’t (and indeed can’t) accumulate on any sort of significant slope. The entirety of this farm AND the entirety of the one we just purchased sits either atop a hill or on the side of a hill with plenty of slope to drain water. Frankly it could have rained twice as much as it did and there still wouldn’t have been any flooding danger.

Given the extent of the news coverage this weekend, we can sure appreciate why some of our clients were worried about us and their horses. I'd like to leave you with some pictures that I took in each of our pastures today (which include short explanations of what you are looking at) that may help show why flooding will never be of serious concern here.

I took all of these photos from the cab of a 7610 Ford tractor. Including the front end loader, this tractor weighs 11,500 lbs. Unbelievably, I did not sink in enough to leave muddy tire tracks anywhere on this farm.

I hope everybody is getting ready for a great Wednesday !

A pretty photo of the pond taken from the large 40 acre field where the big boys live. Their entire field drains into and slopes toward the pond. 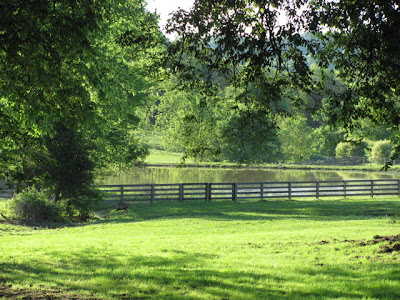 A picture of the field with Clay standing beside the hay feeder (this field is adjacent to the big boys' field). Note the slope which continues through the mare's field (across the alley) toward the road. We are standing 1500 feet away from the road and we are situated at least 50 feet higher than the elevation at which the road passes the front of the farm. This gives us a 3 % slope...more than enough to ensure water will drain. 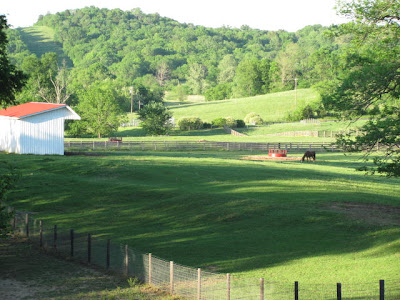 This photo is taken looking toward the pond from the top of one of the hills in the big boys 40 acre pasture. No problem with drainage here ! :) Dustin is acting as our supermodel today. 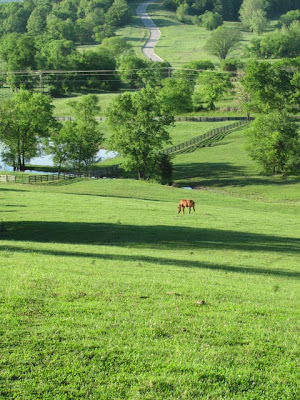 Another nice shot of the pond from the hill in the big boys field. Note the slope on the field behind and to the left of the pond. Some of these slopes are very gentle but they still allow water to drain. 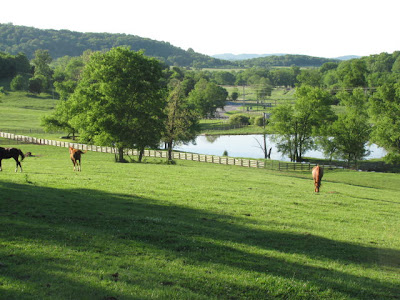 Another shot of Clay's field (also shown in the 2nd picture) showing the drainage channel in the middle of the field and the hill at the rear. 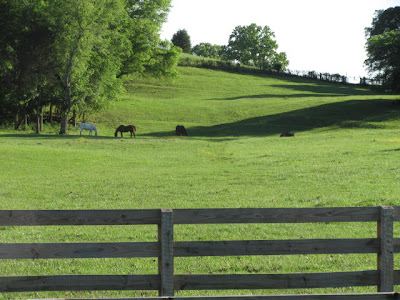 This is taken from the roadside in the mares field looking toward the woods and hill at the rear which is in Clay's field. Note the difference in elevation between where I'm standing and the hay feeder. A very gentle slope but it still drains water. 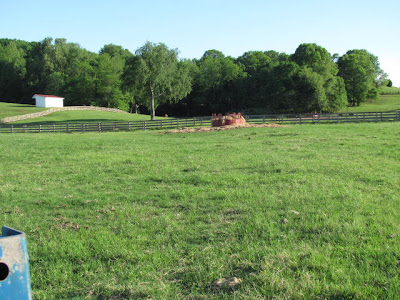 This is the valley above the pond and between two sets of hills in the big boys 40 acre field. Note how dry this looks two days after receiving a foot of rain. Like all the rest of these photos, I took this shot from the cab of a Ford 7610 tractor which weighs 11,500 lbs. I had just driven up this valley. Note that there are no tire tracks visible in this photo. 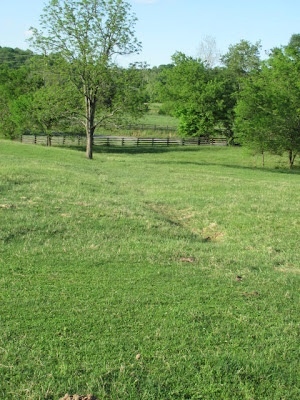 The only place there was any flooding at all was right at the road. You'll notice how the road acts like a dike for the land that flooded to the left of it in the photo. This is by far the lowest point on the farm. With the exception of the flooded area in the photo, I'm standing at the lowest level in the remainder of this field. Melissa keeps her horses in this field. 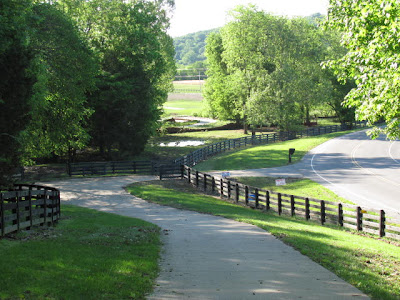 This is a shot of the "ring field" as we call it. Because of the hill contained within this field there is no chance of flooding here, except for a half acre area immediately behind Melissa's ring which collects runoff from the rest of this field. 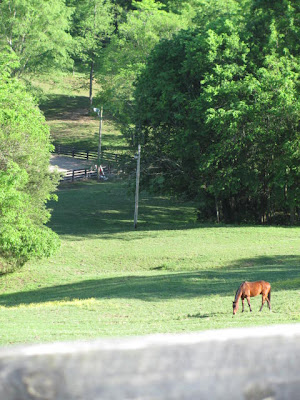 Posted by Melissa-ParadigmFarms at 9:10 PM

I believe it! I rode in our "arena" today, which is usually as slick as snot with an inch or two of rain... in fact, the ground is cracked again in some places. Weird thing, isn't it? I suppose our elevation, though not as dramatic as yours, keeps water from sitting very long.

Glad to hear that you all are ok! The pictures are absolutely gorgeous!

Land selection is so important when conditions are like the ones you've experienced. Hope all you neighbors and friends are OK too.

The sprawling expanse of delicious grasses in those photos makes me drool, and I am not usually one to descend to such uncouth behaviors . . .

I've taken the liberty of adding you to my blog roll at www.BraysOfOurLives.com. I hope you don't mind that I'm a mule . . . some people see this as my greatest asset, but one never knows how it will be received.

I am so glad to see that everything is OK. It looks so green and lucious! Of course Pete said I was being ridiculous and that there couldn't possibly be any flooding at your farm being on top of that mountain as you are!

With as much media attention we got, believe me when we say we understand ! But sometimes pictures are worth a thousand words. We hope our photos helped settle your mind.

Amazing...Ft Campbell could use some of that insight in planning. :)