There are very few tasks that I truly dislike around the farm but a few things do make the dislike list. I had to do one of them today, which was scrubbing the pet cows' water trough. I really hate doing this. Jason and I like to watch Mike Rowe's Dirty Jobs on the rare occasion that we watch TV, and scrubbing this stupid cow trough is one of my dirty jobs. It is amazing how much water six cows can consume in a day so they have a huge 300 gallon trough. It seems I rotate my time between filling their trough and cleaning it sometimes.


Today was cow trough scrubbing day. First I have to wrestle this ginormous trough upright so I can dump the remaining water out. After a session of wrestling this trough I need a visit with a masseuse and a chiropractor. I finally got the trough upright and the water dumped. Of course the water is splashing everywhere and getting all over me and I'm soaked before I've ever really gotten started at this crummy job.


As I do with all of my troughs I spray the inside with a 50/50 bleach and water combination. Except today the spray bottle decided that the sprayer part wasn't going to work anymore. I kept trying to adjust the nozzle to get it to work but it was determined to make this job even more miserable than it already is. So I unscrewed the spray top from the bottle and was trying to just splash the mix around everywhere. As you can imagine I managed to bleach myself about as much as the trough.


Then it was time to scrub the trough. As I was scrubbing away with the trough still tipped up vertically it fell over. Instead of wrestling it up again I just got in the 300 gallon trough and kept scrubbing. I was already wet and covered in bleach anyway so I just climbed and in and kept scrubbing.


Of course then I need to rinse the bleach solution out which involved wrestling the trough back into an upright position. So I had round two of cow trough wrestling except this time I had bleach water splashing all over me. To give you an idea of how big this trough is, when I tip it up vertical so I can dump water out the trough is slightly taller than I am and I am 5'8", not exactly a shorty!


Finally it was time to rinse the stupid trough. I get the trough rinsed and it is now sparkling clean and ready for the cows to trash it again. I put the hose in the trough so it could start filling with water. Since the trough is 300 gallons this takes awhile. I turned to walk away as I was going to go do another task while the trough filled. Just as I started to turn away the water hose decided to jump out of the trough and sprayed me down. I've now been drenched by cow-saliva filled water, bleach solution, and now the hose. On top of that the day was still young and a shower was not in my immediate future.


As I wrap up this post I am most excited to be done with my day so I can finally take a shower. Currently I look like someone that would make small children start to cry. Off to a hot shower at last!


This does make me think of the time that my 8 year old niece told me I was dirty all the time. She then asked me if I had to take a bath every single day, including washing my hair. I told her yes and she said "that's what I thought you would say." Out of the mouths of babes . . .

Another pasture is now fenced in 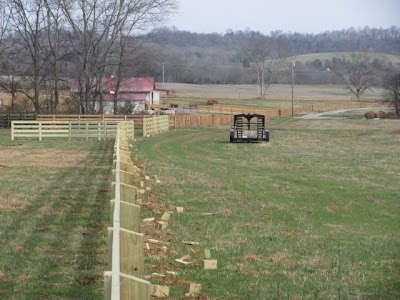 and now the run-in shed is under construction 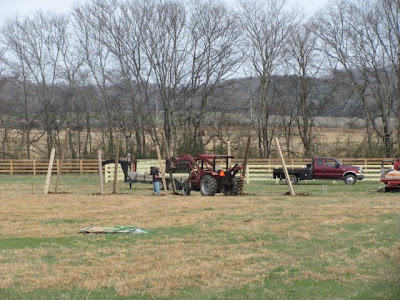 I think we've put in ten or eleven thousand feet of fence so far; another picture of the recently finished fence 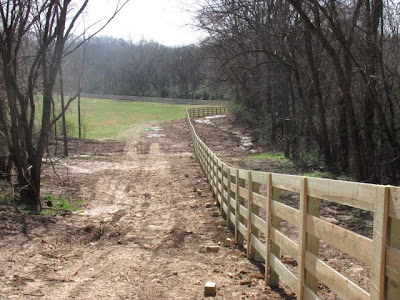 I suppose my first thought when I look at the pictures should be something other than ca-ching, ca-ching. However that is the first thought that comes to my mind! 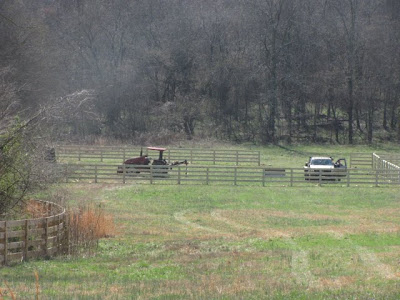 Levendi and Trigger grazing near some daffodils in the pasture; their are random patches of daffodils all over the pastures at the new farm 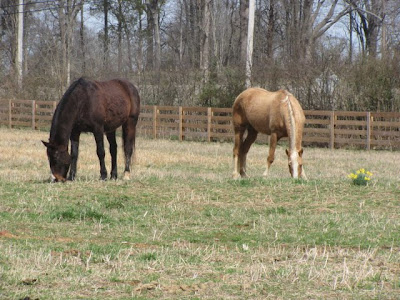 the horses get worn out watching all of the comings and goings of the construction crews; Ivan and Thomas had to go down for a nap 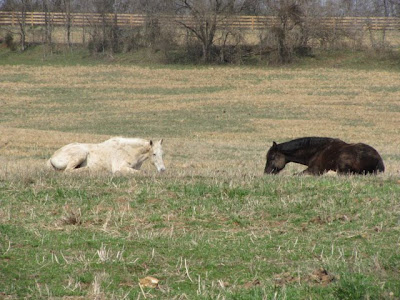 Homer wandered over to join them in their siesta 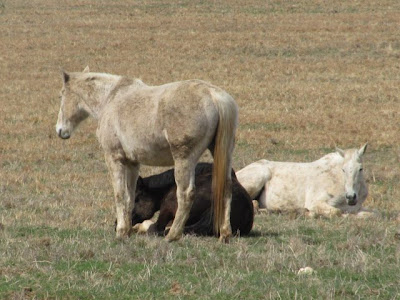 poor Leo was pushed to the point of exhaustion watching all of the people; Elfin grazing nearby 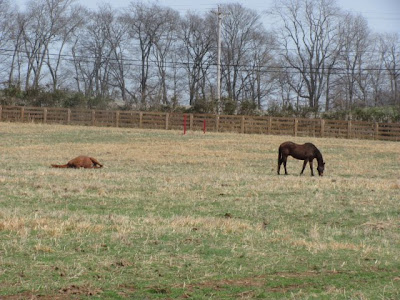 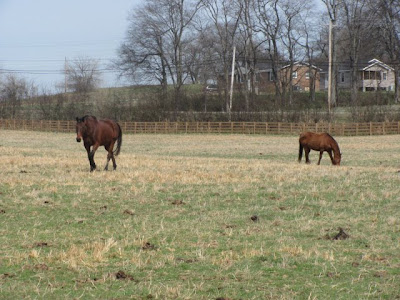 Hoffy and Apollo, and more daffodils 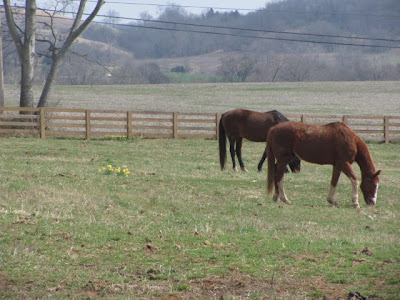 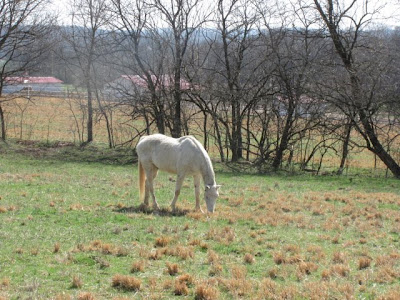 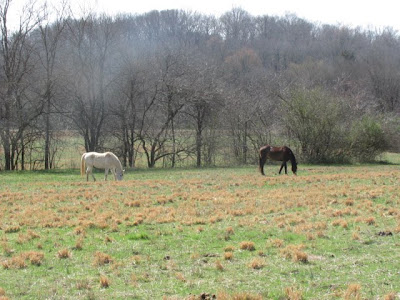 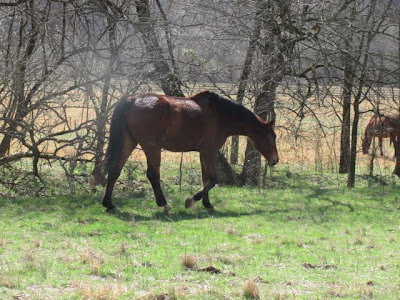 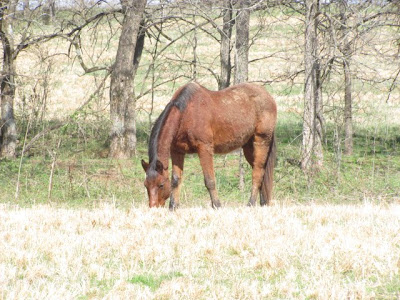 Posted by Melissa-ParadigmFarms at 8:18 PM

I've been putting off the cleaning of our three 100 gallon troughs, hoping it would warm up enough that I could take the drain-plug heaters out while I had them empty and up-turned. But spring is still being a tease, so I finally just got the scrubbing out of the way. I have to agree, it's not a very fun job!

Jason, you can build my fences ANY day!

So you got dirty, then disinfected, then rinsed off! I think you just won't grow algae anytime soon ;)

Love those fences. All of us who've ever tried to build a fence appreciate how straight and beautiful yours are.

Sorry - your post made me giggle - but I feel your pain :)

Nothing more hateful than an unruly hose! If one could be designed that would:

someone would make a mint! Have a great weekend :)

I hate scrubbing troughs - I can't imagine the nastiness that is in a cow trough - gross!

This post just made me think what a perfect episode idea for I LOVE LUCY! Funny!! I've been gone for a month visiting my parents. The weather is starting to break here so I've started working the horses again. Last year, I worked them all throughout the winter but this year the weather was just awful and depressing. Hey, you should be saying every time you look at that fence...."how beautiful is this fence and farm"!;)

Could you not use two or three 100 gallon troughs? At least you wouldn't risk disabling back injury each scrubbing day =)