We're getting ready for another moving day in the very near future. As you have seen from previous posts we've built more fence and another run-in shed. The only thing left to do is to run water and electricity down to the new pasture. That was our project over the weekend. We feel like we're pretty much old hands at all of this construction stuff at this point.

Jason on the Ditch Witch 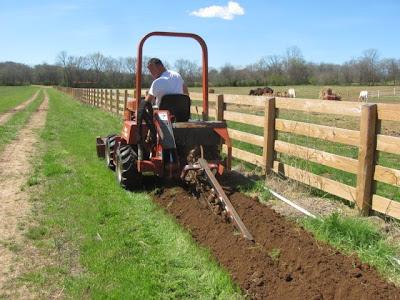 On Saturday morning Jason headed over to the rental place and rented the trenching machine, otherwise known as the Ditch Witch. We are fans of the Ditch Witch and are more familiar than we would like to be with this piece of equipment. In all of our construction at the new farm there have been a couple thousand fence posts put in the ground so far. We've already put in over 1200 feet of water lines. Earthwork was done for the barn and the three run-ins, plus these buildings involved setting multiple large posts. In all of this construction we've never hit one single rock. Not one. I'm sure you are guessing where this is headed . . .

We unloaded the Ditch Witch off the trailer and Jason started trenching. My job was to use the tape measure and make sure the trench was always at least 18" deep, ideally we aim for 22"-24". Although our frost line here is only six inches (and the main water line we tapped into at the road was buried at a depth of six inches) Jason likes to lay our water lines about two feet deep. This is another area where his Canadian roots come out. I guess when you grow up in a place where your water lines had better be at least 8 feet in the ground six inches probably seems like a highly unacceptable depth. So we aim for two feet.

The horses used to find all of our construction projects highly entertaining. Last summer the Big Boys would gather at the fence and watch Jason for hours as he built out the interior of the barn. They were especially fascinated with the nail gun. I guess at this point all of the horses feel like they've seen it all and no longer find any of our projects particularly interesting or entertaining.

Regis was having a lazy day and saying "do these people ever quit working? Don't they know this is a retirement farm? Man, they're really stupid." 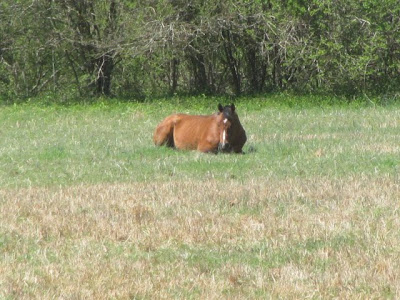 Spike was thinking "Another day, another construction project. Ho hum. Those two are just gluttons for punishment." 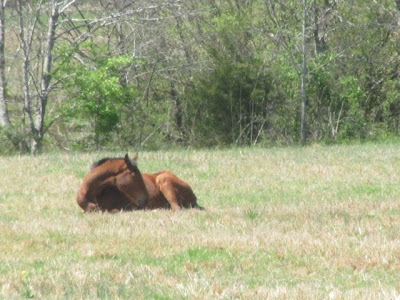 Jason is trenching away and I'm dutifully measuring the trench every couple of feet. All was going well. Until suddenly it wasn't going well. The Ditch Watch starts lurching around and smoke is coming from the trench. Then it stalls out and dies. For the first time in our many construction projects we had hit a rock. Jason was not happy. I tell him to just start the trencher again and keep chipping away, that it is probably just a little rock and we happen to hit it just right.

So we start this cycle of lurching trencher, smoke coming from the trencher while grinding against the rock, trencher stalling out. After the 4th try Jason and I have a meeting of the minds while staring into the trench. This rock is looking kind of - uh oh - big.

Jason: We're going to have to get an excavator in here, this is never going to bust through that.

Me: Never say die! Keep trying, we'll eventually get through it.

Me: Then get me a pick axe and I'll bust through this thing. (I should add here that I am a somewhat OCD type person. If I have something on my to-do list that day by gosh it is going to get done. It can make me a hard person to live with at times.)

Jason: Silence, he looks at me like I've lost it.

Me: Stop staring at me and let's do something! Surely YOU can get through this thing with a pick axe and a shovel.

Jason: Look at how big this rock is. We're not going to get through it.

Me: Try moving the ditch witch over and see if we can just go around the rock.

Jason: Gives me a doubtful look but complies with my request. He hits rock in the same area. He turns off the ditch witch and announces "we're done."

Me: I'm still in never say die mode. I'm peppering Jason with "What about this" and "why don't we try." I'm getting worked up. Picture my arms flailing about as I gesticulate wildly trying to convince Jason we can do this. Can't we use the tractor or something?? Come on Jason, put your big boy pants on and start swinging a shovel or something!!!

Jason: Now he's starting to flail his arms around while gesticulating, making his point that the rock is too big, the Ditch Witch clearly cannot get through it, and if the 4 ton trencher can't bust through the rock we aren't going to to do it.

This is not the face of a happy Jason 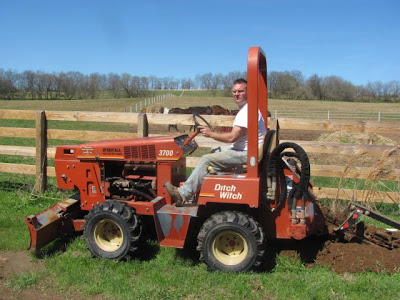 While we had this raised voice, arms flailing conversation it was the only time the horses paid any attention to us. I think the peanut gallery would have been egging us on and heckling if they could talk. The horses find serious entertainment value in watching a husband and wife attempt to work together on a daily basis. In the end Jason convinced me that since the Ditch Witch could not get through this rock nothing else we had at our disposal was going to the job either. He left a message for a guy that has an excavating machine. The excavator is coming tomorrow to solve our rock problem.

We needed to put in about 1200 feet of water line. There was a patch of rock in about 10 feet of that. We are having to bring in an excavator for 10 feet. There really is no justice in this world sometimes. The kicker to this is that even if we laid the water line on top of the rock it would have been more than six inches under ground. But NOOOOOO, we have to exceed that by another foot and a half. I'm just saying . . . 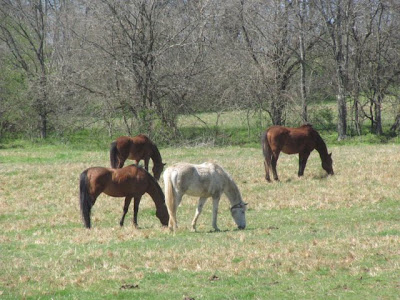 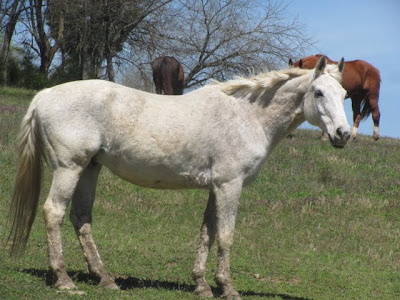 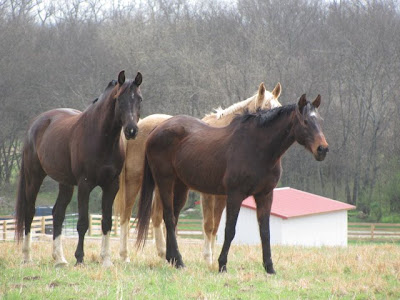 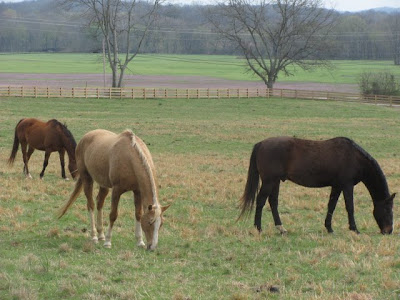 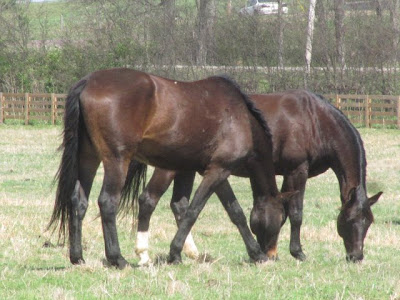 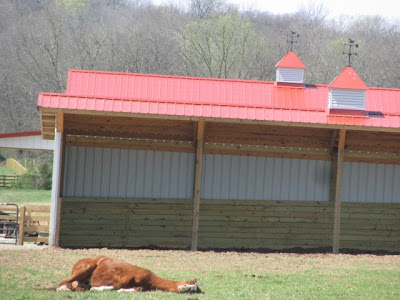 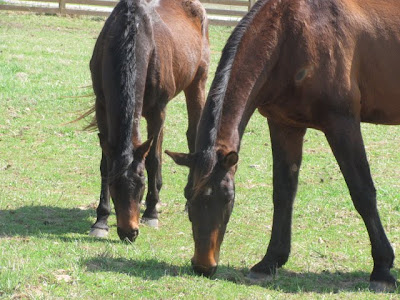 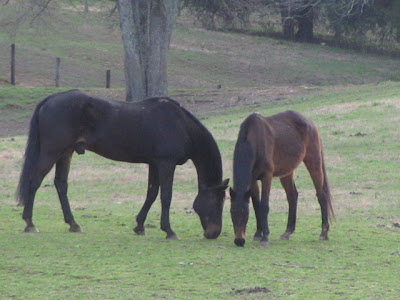 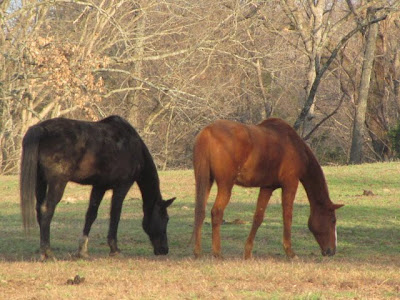 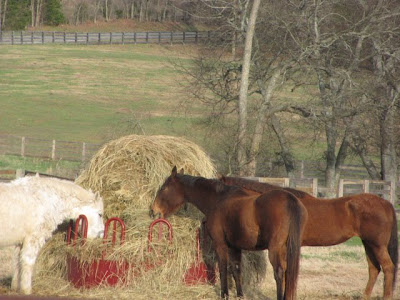 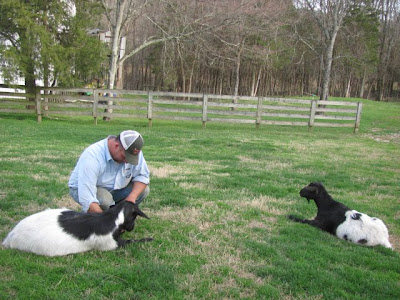 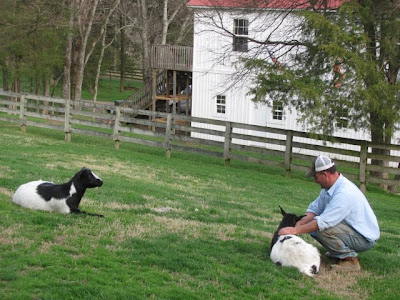 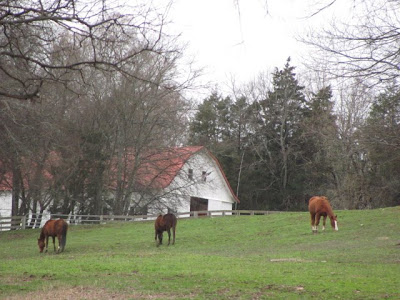 Rampal and Clayton anxiously waiting for me to feed them 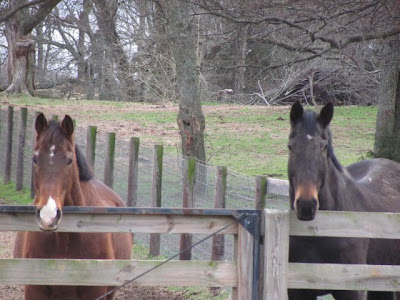 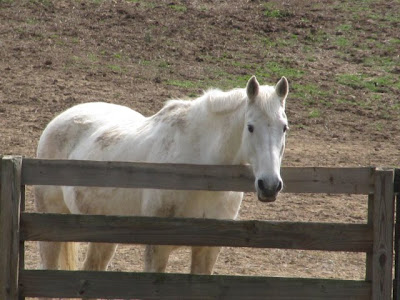 We put in over a mile of 2-, 3-, and 4-inch irrigation pipe a few years back, and the ditchwitch was our friend...until it wasn't. Three sections needed a track hoe, but one section sounds a lot like yours: nice loose soil except for isolated rocks. We used to grade them: "softball," basketball," Volkswagen." Sounds like you hit the latter! Good luck!

i *lol*d at the last bit - it would have been 6 inches without removing the rock? ooooooh that's terrible!

EvenSong, we were mostly mad because it never occured to us that we would need anything other than the ditch witch. Love your rock grading system - until this weekend we had never even hit a softball. It seemed so unfair to go from zero rocks to a freaking Volkswagen!!

Coincidentally, the top of our rock grading scale is also "Volkswagen". And we have found one. Smaller ones, such as "Lazy Boy" are no problem with the backhoe, but "Volkswagen" is still peacefully in situ.

You're lucky you don't live with my husband. He would have gotten out the backhoe and by evening the rock would have been out, leaving a crater begging to be contoured into a pond and we would be moving the fence to make room for the gazebo.

Around here our entire hillside is "rock". My lady gets very annoyed. Big rocks and little rocks all over the place. We are eager to see the size of that pesky rock when you dig it out!

Oh, Melissa, you poor thing. Keep working at it and one day you'll get Jason properly trained. ;)

We have one of those rocks in our front yard. Supposedly, they dug down about 6ft, and didn't find the bottom, so they gave up and we have a highly obvious landmark.

Good luck getting it out!

Melissa can consider herself extremely lucky that we don't now own a track hoe. I don't give up on this sort of stuff very easily !

Eventually we gave up in defeat and trenched around it. Even with a backhoe the main part of the rock never even wiggled, although we were able to chip pieces off the edges of it.

We never hit another rock while trenching the rest of our water line today and in fact even around the Mack truck the soil never changed colour, meaning we never got out of topsoil. Strange stuff.

You know that 60 years ago someone dumped that rock there and thought, "Nobody will ever need to move this. This is a perfect place for it!"

Also, it could be that at one point that was a landmark rock, and the topsoil has migrated down the hill and settled around it.