Classic Rock, better known as Rocky, is a thoroughbred gelding who joined us from Ohio for retirement. Part of Rocky’s Jockey Club name was “Stallone” and his barn name Rocky was the natural offshoot from that. Rocky never raced and in fact never even made it to the track for training. As his mom said he was way too slow for the race track and that must have been evident very early on.
Rocky and his mom 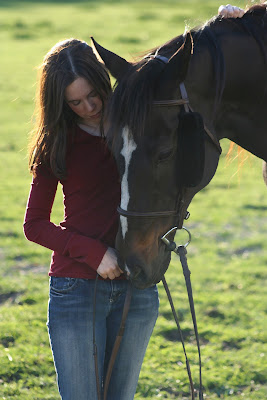 She met Rocky when he was three years old and he was barely started under saddle. She was a high school student and her family was on the hunt for her very first horse. The budget was limited so they ended up buying an inexpensive, green broke horse named Stallone. Thankfully she immediately changed his name to Classic Rock after purchasing him. I say thankfully because I know Rocky well now and Stallone simply does not fit his personality! 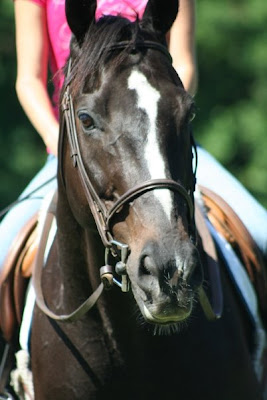 Rocky’s mom set about training her new, very green horse and prepping him to show in the hunters. When we were discussing Rocky’s background she made the comment “oh, to have the time and energy to do all of that work again!” They made it into the show ring and had a lot of success showing in the children’s hunters. After I watched Rocky trotting around in my arena on his first day at our farm I turned to Amy and made the comment “there’s the hack winning trot right there.” I asked his mom if she and Rocky ever got beat in the under saddle and she said, unsurprisingly, they almost always won.

Rocky and his mom showing off one of their blue ribbons 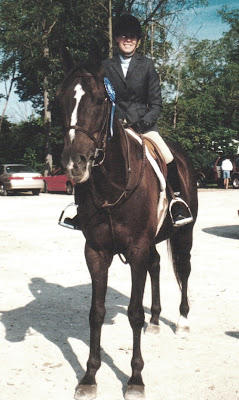 During their first year of showing together Rocky and his mom made it to quite a few horse shows and did their share of winning. Unfortunately the following year he fractured a coffin bone. At that point she was faced with some hard decisions. Her family could only afford to have one horse, and the odds that Rocky would recover enough to return to his previous level of work were low. In the end she decided she just wanted her horse to be happy and healthy regardless of whether or not she could ride him anymore.

Rocky and his mom 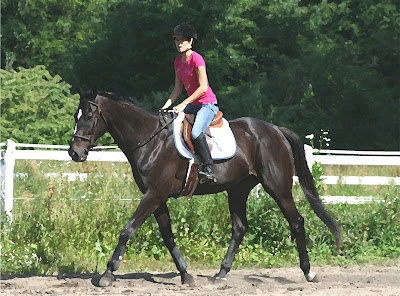 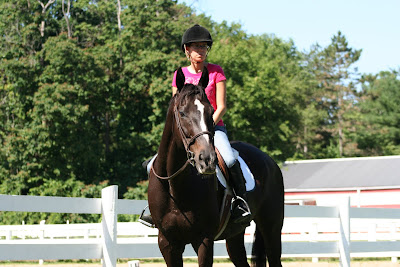 Rocky ended up having two surgeries and 7 months of stall rest. Amazingly everything healed and they were able to return to riding. Rocky’s clearance to return to work coincided with his mom starting college. Mostly due to time restrictions Rocky went back into light work and training, with the best part being he was able to return to jumping as well.

Rocky meeting his mom's nephew. The familiar horse to the left in this picture is Toledo. He and Rocky joined us from the same barn although they have different owners. 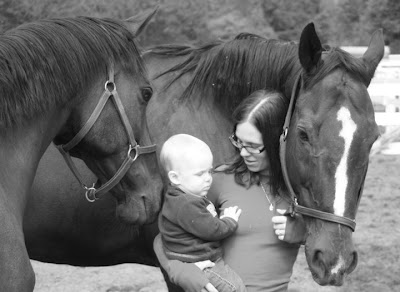 After graduating from college Rocky’s mom was faced with the typical scenario of the new grad, time but no money. She and Rocky attended some shows here and there, but mostly they just rode for fun. Eventually Rocky began slowing down as he got older and they eventually stopped showing and spent a lot of time out riding on trails together.

Rocky and his mom enjoying some quiet time together 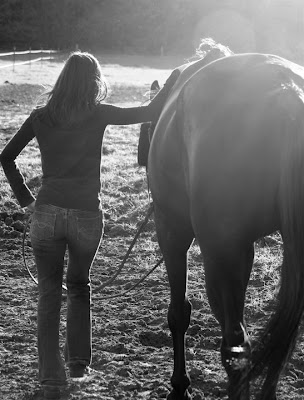 When I asked his mom what it was like to ride Rocky I was surprised at her answer. “Honestly he is the most uncomfortable horse I have ever ridden – I rode him far worse than any other horse. Sometimes when I would get on another horse people would say ‘Wow! I had no idea you could ride like that! Why don’t you ride your own horse that well?’” She said Rocky was very light in your hands but very hard on your legs, and needed a lot of encouragement to really get some impulsion and go forward. No wonder he never made it to the track!

Rocky showing off for me in my arena; this was taken on his first day with us 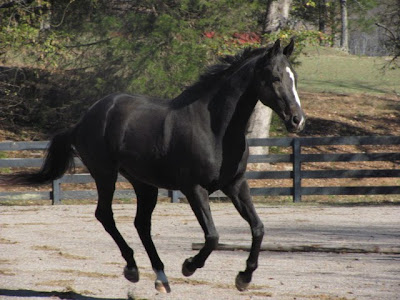 His mom said that 99% of the time Rocky was always very willing under saddle and would do whatever she asked of him. But then the other 1% of the time was spent spooking at stupid things or taking off bucking. I love how she summed up her relationship with Rocky: “He has never been my favorite horse to ride but he has always been my best friend!” 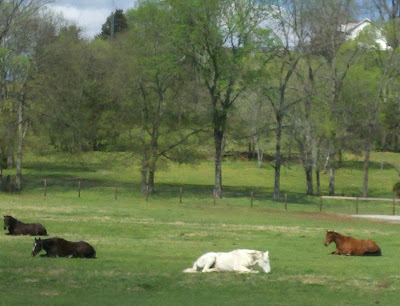 Rocky and his mom have now been together for almost seventeen years. He was the first and only horse she has ever owned. Rocky is now enjoying an all expenses paid retirement courtesy of his mom. I’m sure he has no idea how lucky he is to have a mom that loves him so much. We hope you have enjoyed getting to know Rocky and his mom as much as we have.

Posted by Melissa-ParadigmFarms at 7:52 PM

A sweet story - what nice pictures of them together. Kudos to her for taking care of her horse in his old age.

What a great owner and a lovely horse! Its so nice to hear these good stories, thanks for sharing Rocky with us.

I love reading these profiles of the horse and the one who loves them so much.They always fill my heart so full it spills out of my eyes.Thank you.

Thank you for the great story. I too love reading the profiles of your residents. Sometimes I feel sorry for myself that due to circumstances beyond my control my riding partnership with my beloved horse was taken from me. It soothes me, however, to know that he is in the best place for him to be and that I am not alone...

Great story about a horse I know well. Rocky and his mom spent time at our barn. He is a lovely horse.

I LOVE this story. In this day and age when people throw horses away when they "outgrow" them in their vain pursuit for blue ribbons, it's nice to see this classy person put the horse's well-being first!!!