Sea Storm, more affectionately known as Stormy, is by the imported Hanoverian Stallion “Sandsturm” and out of a TB mare “Viento de Marza”. Stormy’s prior owner lived on Martha’s Vineyard, so the combination of the owner’s island location and his sire and dam’s names resulted in the name “Sea Storm.”
Sea Storm 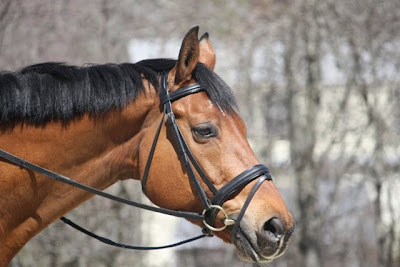 Stormy’s mom was a typical horse crazy kid. She had a horse growing up but never any formal training. As often happens horses went on the back burner while she was in college and then law school. Once she had gotten herself through law school Stormy’s mom was determined to get back into horses and riding. It was at this point that she discovered dressage and started riding with her trainer who she ride with to this day, many, many years later. After leasing for a while she was ready to buy her own horse, and the search began.

Stormy's mom is lucky enough to have a foal picture of him. Does it get any cuter than a new foal snuggled up to a cat? 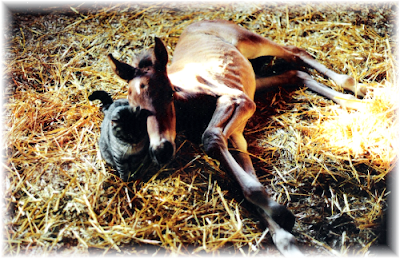 During the horse search she originally fell in love with a mare in Rhode Island named Compass Rose. However the mare’s owner had a change of heart about selling her and took her off the market. It was back to the drawing board. At this point someone found an advertisement for Stormy, so Stormy’s mom and her trainer jumped on a ferry to Martha’s Vineyard to check him out. In addition to meeting Stormy that day his mom actually had the opportunity to run the ferry. Many memories came out of that fateful day.

Stormy had just turned 6 and both he and his mom were very green when it came to the discipline of dressage. They were a challenging combination to say the least. Stormy was not gelded until he was 3 years old and is very spirited and smart. According to his mom submission was never one of his strong points. As she said it is not one of hers either so they were at least able to understand each other! Stormy’s mom jokingly told us about one of her "fond" memories of their first clinic together. During their ride Stormy actually stopped, backed and fired double barrels at the clinician. It sounds to me like Stormy wanted to make a statement . . . and he did! As the years passed they began to come into their own together, but it was always Stormy’s way or the highway.

Stormy and his mom riding in a clinic (not the one where he attempted to double barrel the clinician!) 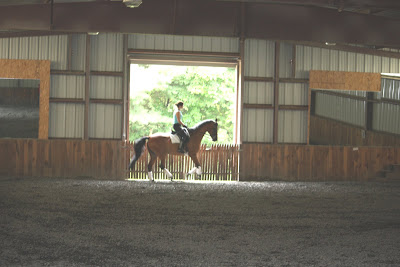 Stormy and his mom competed up to 2nd level at local shows and around the New England area. They had great times traveling with fantastic friends and had lots of laughs over the years. She said at times she and Stormy were the laughing stock and at times he was brilliant. At their last show together Stormy pulled out all the stops and they scored a personal best score of 74.211%.

Stormy and his mom competing at a show 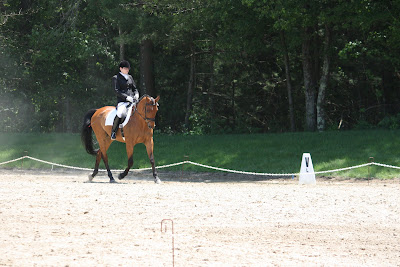 She knew when Stormy had had enough, that he no longer enjoyed his work, and it was time for retirement. The cold was tough on him and she felt it would be easier on him to retire further south. Retiring Stormy was very difficult for her, but then again I’ve yet to meet the person who found it easy. As with most people who are retiring a partner and a friend it was very emotional time for her. It is very important to add here that she considers herself lucky that certain friends still talk to her (and she adds you know who you are).

His mom is hoping to lease a horse this summer and is continuing her riding career as a catch rider. I admire her attitude. It can be easy to stay in that place of feeling sorry for yourself and stomping your foot while saying “nothing is better than the partnership you have with your own horse.” (I know this because I might have had this attitude myself several years ago when I retired my beloved mare Bridget.)

Stormy and his mom training at home 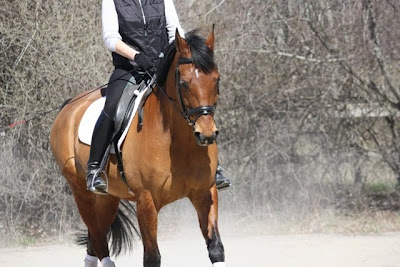 I did not know this but Stormy’s mom searched for his perfect retirement home for two years. Apparently we were one of the first farms she heard about and the one she ultimately chose after she visited the farm. Jason and I remember her visit well. She and her aunt made a trip to the Nashville area and worked a farm visit in while they were here. We all had a good time laughing and joking. It such an honor, and also such a responsibility, to have people like Stormy’s mom place so much trust in us.

Stormy is having a grand time roaming big open fields, rolling and playing with new friends and generally enjoying life. Stormy still has his my way or the highway approach to life – there are some things in life that never change.

Stormy and his friend Tiny passing a very relaxing afternoon; this picture is another one that makes my favorites list 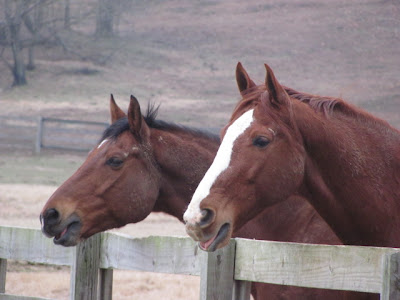 Posted by Melissa-ParadigmFarms at 7:02 PM

He's beautiful - and I'm always heartened that people care enough about their horses to make sure they have a secure and happy retirement.

If Stormy's mom didn't love him so much, she wouldn't have looked so hard for the right retirement home--Hence, saying goodbye, even between visits, is of course, emotional.

He is beautiful. And sounds like Stormy's mom might be from RI? I want to meet her! Little Rhody folks stick together ;)

Love this pic. they both have their mouths open! No doubt chatting it up.

What a lucky horse to be so loved and appreciated.I wish they all were.

oh wow he's really a great color! and what an attitude, please keep telling us about him. i wonder what he thinks of your worming method?!: )