We're in the middle of our second cutting of hay right now. Today was just shy of a sixteen hour day. Yesterday was an "easy" day at twelve hours outside. We've got a couple more days to go to finish up the second cutting. I'm forcing myself to not fall asleep into my keyboard right now and it is taking a lot of effort!

Apparently I perfected my hay trailer backing skills a few weeks ago with our first cutting of hay as Jason had no commentary on my backing skills today. The dreaded ratchet straps also failed to make an appearance today. They were in the bed of the truck neatly rolled and waiting for use but Jason never pulled them out. I made a point of not mentioning this to him (I hate those things!). Each time my wagon was fully loaded I just drove off to go unload instead of giving Jason a chance to remember the straps and start using them. I would rather creep through the pastures going 2 miles an hour in first gear than waste another minute of my life trying to conquer the ratchet straps.

Our biggest issue of the day was where to put the hay. As you know our new hay barn is currently housing 185 5' x 5' bales and is already full. We also have another hundred bales being held for us in someone else's hay barn. We ended up putting a gravel pad in the area fenced off for our future hay barn #2 and put the hay there and covered it with a tarp. As long as the weather cooperates for us for a couple more days it looks like we'll end up with hay under three tarps. As I said to Jason today the tarps are certainly aesthetically pleasing like the hay barn but they accomplish the same thing.

If you have never used a hay tarp consider yourself lucky and hope that you never have to (man)handle one. The things are freaking heavy, weighing in at about 125 pounds. Some unlucky person (Jason) has to make like a monkey and climb on top of the stacked hay. That same unlucky person (Jason) has to climb the hay pile while dragging this ridiculously heavy and unwieldy tarp up with them. Then the unlucky person (Jason) gets to scramble back down the other side to pull the tarp all the way over the hay. Messing around with these tarps is enough to make me long to have another hay barn like yesterday. Oh well, I guess we will just have to make do with our redneck hay tarps for now!

I am off to take a shower and collapse into bed. Jason and I should sleep well tonight!

The view from the truck today 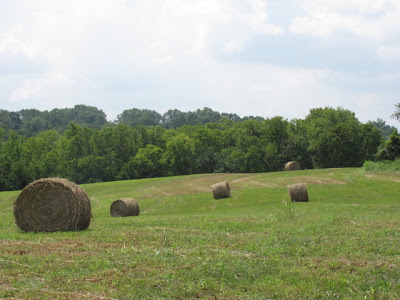 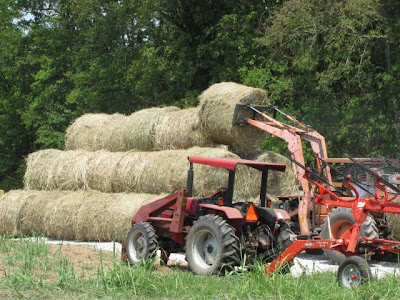 I didn't get any pictures of Jason scaling the hay with the 125 pound tarp in tow - I think he would have killed me. We were so tired we didn't even bother tying the tarp down properly and just stacked a couple of bales on the edge of the tarp and agreed we would fool with the ropes tomorrow. 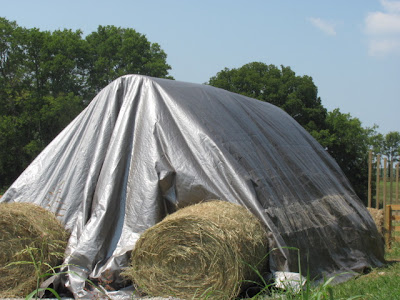 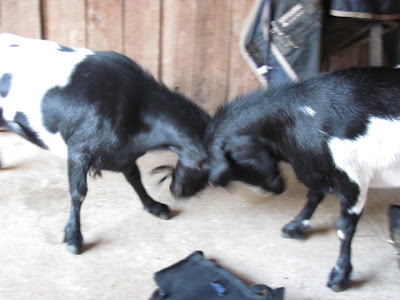 Stormy standing over a heavily napping Clayton (Toledo in the background) 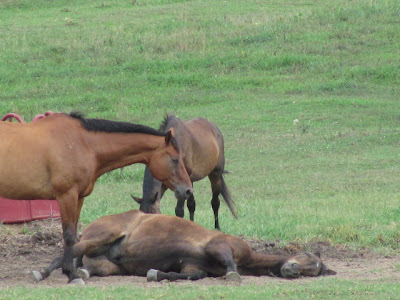 Gus and Johnny having a grooming session over the fence 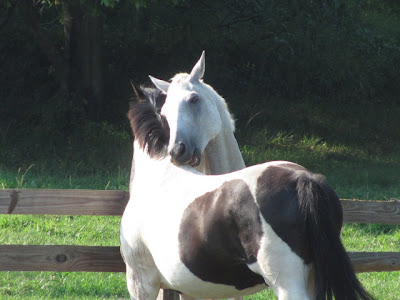 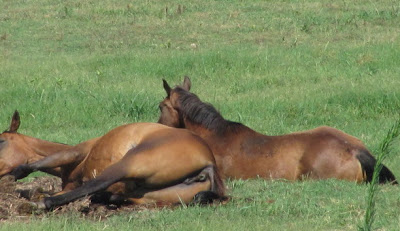 The greys on the move; Silver, Gus, Asterik and George 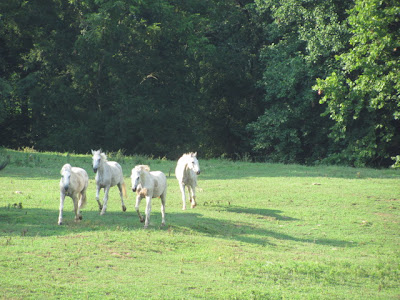 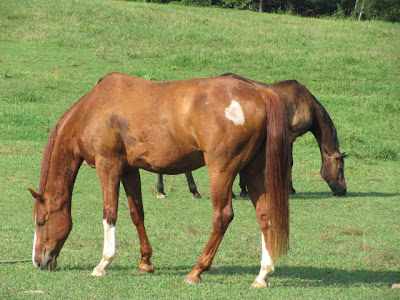 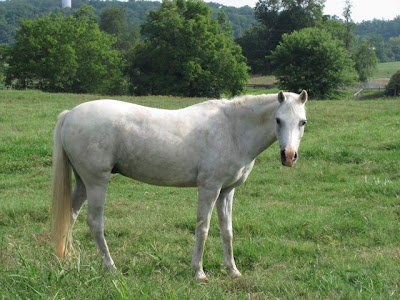 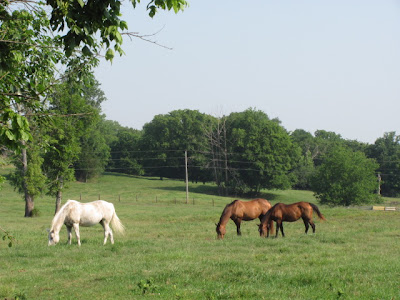 Silky napping in the shade with a drooping lower lip 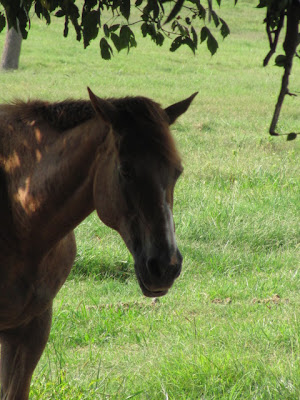 Posted by Melissa-ParadigmFarms at 8:48 PM

I hate all tarps - large to small - with our winds they're often impossible to handle. Love the happy summer horses!

Congrats on all your hay- quite impressive!

My comments on your blog don't seem to be coming through these days!

Yay to the backing skills and lack of ratchet straps!

Aside from having to handle the tarp, I think it sounds rather fun to climb to the top of the pile of hay bales :)