There are days when all of the work on the farm goes so easily, and other days when it seems like everything is ten times harder to accomplish than it should be. A few days ago I was feeding dinner to the horses and it seemed like I was going to be at it until midnight. It seemed there was a horse in every group that just ignored me and kept on grazing, despite me standing there screaming their names repeatedly. What really drives me crazy is when they put their head up to look at me, watch me screaming their name and flailing my arms around to try and get their attention, and then go right back to grazing.
I was finally feeding the last group of horses. True to form some of them would not come, despite picking their heads up from the grass and looking right at me. I set out to chase down the offenders, Alex, B-Rad and Darby. I had Darby's feedbag with me so I could put it on his head and use it to lead him across the (very large) pasture to the gate. This worked for a minute until Darby realized that Alex and B-Rad were not following us. He freaked out at the possibility of being farther than 30 feet away from them in the same pasture. I tried to hang on to the feedbag but with nothing to really grab he got away and went back to his friends.
I trekked back to where they all were and got behind them and started clapping my hands and clucking at them. Finally they start heading towards the gate. If I stopped waving my hands and clucking at them for even a minute they stopped, so I worked twice as hard as they did as I attempted to keep them moving through the pasture.
We finally made it to the gate and I get everyone fed. Alex was done quickly and I took off his feedbag. Instead of hanging around by the gate he decides to wander back out to the pasture to go graze. This is a pretty typical occurrence. For some reason Darby decided to take exception to Alex leaving while he was still eating (and all of the other horses were still eating) and he goes trotting off after Alex, with his feedbag still on. I let out an exasperated sigh as I looked forward to yet another trek across the (large) pasture.
Conveniently (note this is said with heavy sarcasm) it starts to rain just as the other horses finish eating. I remove their feedbags and head back out in the pasture to track down Darby and Alex so I can remove Darby's feedbag. Of course they were already as far away from the gate as they could possibly be. My shoes and pants are soaked before I am even halfway to them thanks to the rain and the wet grass. I finally reach Alex and Darby, and walk up to Darby to remove his feedbag. Darby decides that I must be trying to catch him (I should mention that Darby has major separation anxiety at the mere thought of being taken away from the others) and trots away. To say I am not happy at this point would be an understatement. I'm wet, I'm tired and I just want to take the stupid feedbag off so I can be done for the day.
Darby must have realized just how hard he was pushing his luck at this point as he only made me chase him around for a minute before allowing me to walk up and remove his feedbag. With his feedbag in hand I started my long, wet walk back through the pasture to the gate. For reasons I cannot begin to fathom since he had made chase him around the pasture twice at this point, Darby follows me. I had to chase him to be allowed to feed him, then chase him in the rain to be allowed to remove his feedbag, and now he is following me. My clothes are soaked and feel like they weigh 100 pounds at this point, and I slog my way through the pasture with Darby following along behind me. He follows me all the way to the gate, voluntarily separating himself from the other horses. As I gathered up the empty feedbags to put them away Darby went to the water trough for a drink.
I briefly thought about explaining to him that if he had just stood there and finished eating by the gate like everyone else did (and as he normally does) he could have saved himself a lot of running around and I wouldn't be soaking wet. I decided to skip the lecture since it would sound something like "blah blah blah blah blah" to Darby. He finished his drink and went galloping and screaming back through the pasture to rejoin his friends. I put away the feedbags and went searching for some dry clothes.
Renny and Sam exploring their new digs 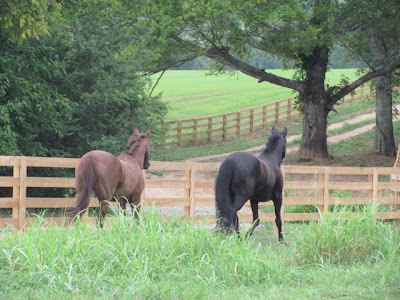 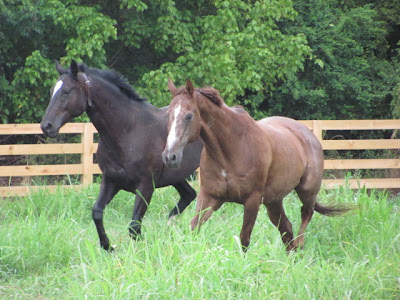 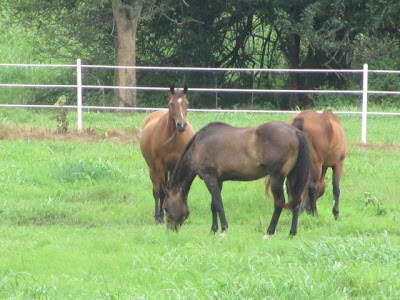 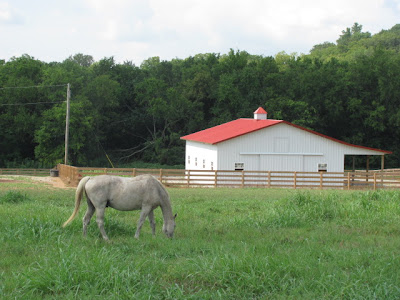 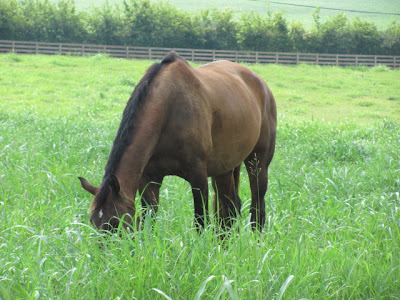 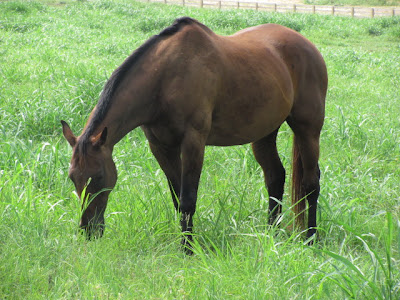 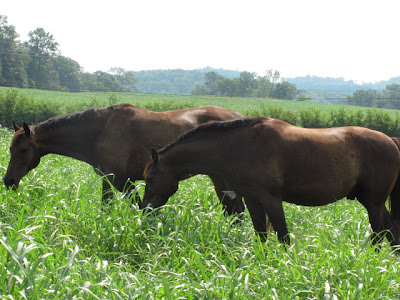 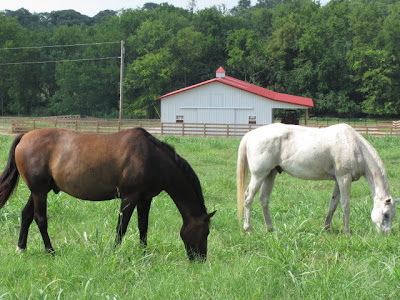 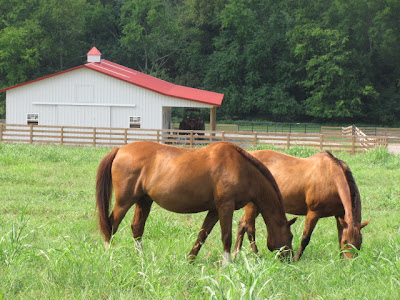 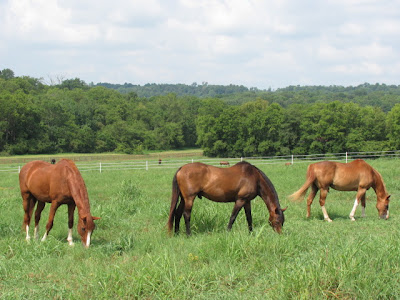 Posted by Melissa-ParadigmFarms at 7:06 PM

I'm sorry Melissa but when I got to the part about Darby following you, I had to laugh! I guess those are the days that make you appreciate the "easy" ones.

It would have to rain right then! I sure do hate wet pants legs.

Don't you love when they do that. On the farm I worked at there was this one mare that would decide not to come to the gate, of course she would choose to stand at the other end of the pasture. We would have to walk to get her through a ditch that was full of mud and mosquitoes to get her.