I had a profoundly thankful thought as I was effortlessly spearing and feeding 1,000 pound bales of hay with the front end loader earlier today. If there are two tools I absolutely cannot imagine trying to run a farm without they would be a chainsaw and a heavy duty front end loader tractor.

That said, I'm going to start my thankful tool post with a gripe. If anyone wants to become an instant millionaire all they need to do is invent a blade for a chainsaw that holds an edge for more than a couple of hours. It is no exaggeration to say that for every hour I run a chainsaw I spend at least half that much time re-sharpening the chain. If I have a bunch of cutting to do and a limited time to get it done in, the easiest and fastest thing to do is bring along several sharp chains and worry about repairing and sharpening the dull ones at a later time.

Dull chains and all I still cannot imagine trying to run a farm without instant access to a really good chainsaw. For fun I've run a crosscut saw with a friend a few times. I cannot fathom the labour involved in trying to convert a two foot thick oak trunk into manageable pieces with a crosscut saw and an axe. Yet until a couple of generations ago this is exactly how logs were cut up.

As I mentioned earlier, the other non-optional tool around here is a heavy duty front end loader. In the winter, our loader's main job is feeding and moving hay. Just in the last week we've fed out 10,000 lbs of hay and have moved another 25,000 lbs. All total this took me about an hour. Prior to 1950 every pound of hay on this farm would have been moved, stacked and fed with a pitchfork. (Melissa chiming in to say I would just quit. No way am I moving 10,000 pounds of hay a week with a pitchfork. I wouldn't get anything else done.) We regularly ask our loader to lift, move, spread and smooth literally tons of earth and gravel, lift and move logs, push and pile brush, etc, etc. 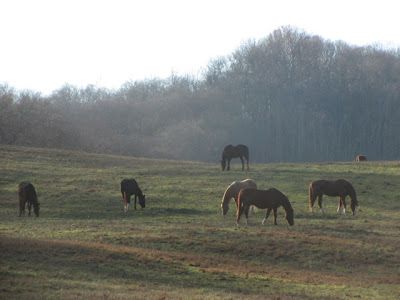 Miss Lyle in the back of the gator, Mina attempting to climb in and Jo watching. When you are a fainting goat everything is a toy. 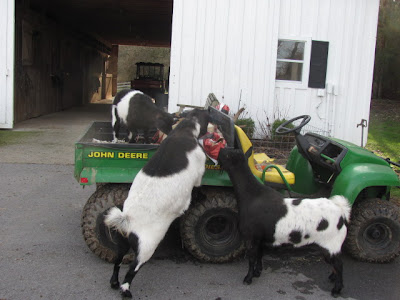 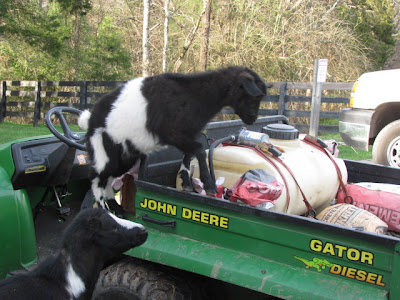 Wiz and Sebastian napping with Murphy and Sam hanging out 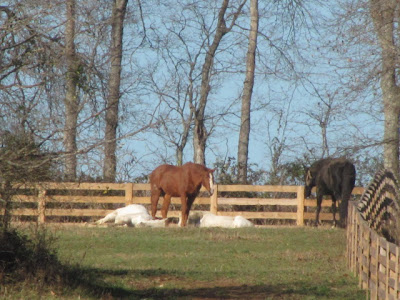 This picture is demonstrating how hard it is to be a retired horse. Gus, Fonzi, Silver and Romeo are down and George, Chimano, Faune and Asterik are hanging out. 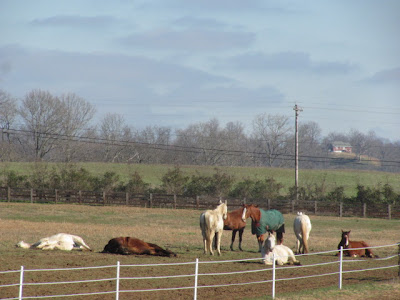 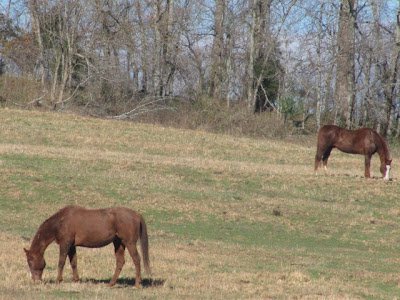 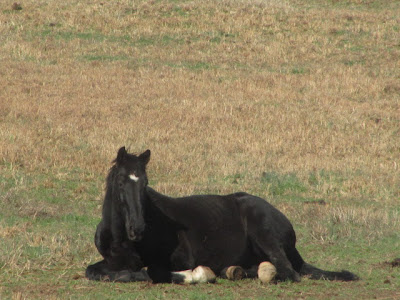 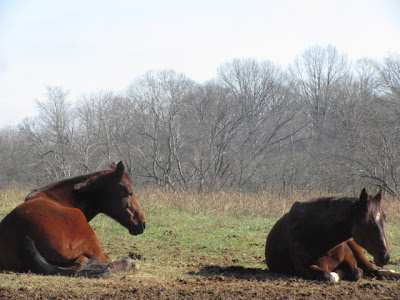 Lighty looking so clean and well groomed that I think we should use this picture for marketing purposes. 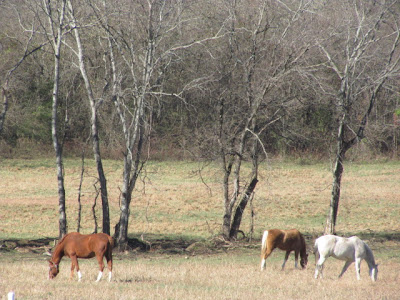 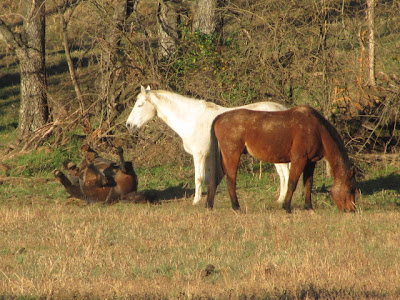 Posted by Melissa-ParadigmFarms at 7:33 PM

I had no idea chain saws dulled so quickly. You need a diamond chain! I actually enjoy the barn owner putting the round bales out with the front loader. It's amazing how agile they can be when maneuvering those bales.

Alex and I just got back from a nice afternoon at my (step) family's farm. My uncle was pretty pleased to show us the brochure for their new New Holland combine harvester and grain tank. While I suppose it can't be considered an essential piece of equipment, it is nice to see they will get to enjoy some creature comforts during their long days next season.

I don't know how I got along for so long without my little (30 hp) New Holland utility tractor!! Ordered it with a front end loader, added a bush hog, back blade, and drag. Have since acquired a manure spreader and, most recently, a post hole digger. Haven't yet decided whether what little I would do with a little back hoe would justify the price, when I've got three different neighbors with various sizes that I can access for short term use--right now I could use the money more justifiably for more fencing and gravel.
Unfortunately, we don't have enough trees around here to make good use of a chain saw. :-( I used to have lots of fun with mine.
Another couple of blogger friends were just touting the merits of dirt-colored horses...

Ditto on the chain saw situation. Don't you also find you have to interrupt progress to tighten the chain way too often?!

Being a landscaper - I totally appreciate my tools too... so much so that I name them:

YES ! Especially when I'm brushing and limbing a tree or a series of trees. The chain actually stays fairly tight if I'm sawing through thick trunks.

There is nothing that'll dull a chain quicker than wet, dirty hardwood bark with osage orange being the worst culprit. That stuff will dull a sharp chain in a few minutes.

I thought B Rad went back to the showring? I see from your other post you're a year behind on introductions, so I guess we'll never know some of the horses you keep posting pics of? :(

Also, not all of the horses will have an in-depth post. For privacy reasons some people choose not to have their horse's full history on the blog and we respect that.