Clayton and his mom first met in February of 1996. Clayton's mom had ridden some when she was a child. She had a couple of horses and had fun with them but never took riding lessons, just enjoyed her horses. When she started high school she stopped riding altogether. As often happens she felt the urge to return to horses, and when she was 30 she bought a horse. She rode that horse for 13 years until she retired him, and the search began for another horse.
Clayton
(photo credit Bob Tarr) 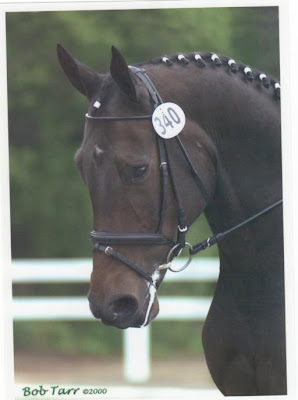 She ended up purchasing another horse from a dealer in upstate New York. That horse turned out to have a lot of soundness issues, so she took him back to the dealer in February of 96 and picked out another horse. This horse was Clayton and it was the beginning of a long and special relationship between them. At the time of purchase Clayton was five years old. His mom doesn't know much about Clayton's life prior to her purchasing him except he was bred in Canada and he is half Selle Francais, 1/4 thoroughbred and 1/4 percheron.
Clayton showing off at a dressage show
(photo credit Bob Tarr) 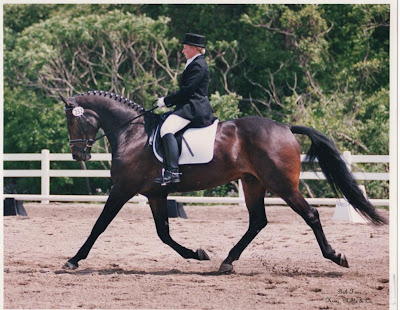 Clayton was very green when his mom purchased him and she wisely always made sure that she and Clayton were under the guidance of a good trainer as they progressed in dressage. As his mom said the thoroughbred side of Clayton never really showed up under saddle. He was kick along quiet and liked to squeal in protest and do little bucks when his rider would insist that he start working and engage himself. Most of the time the bucks were little and nothing scary. One time when his trainer was riding him across the diagonal she asked him for a lead change. Clayton threw a huge buck and sent his trainer airborne, the only time Clayton ever did anything like that. When his mom told me that story I said "I'm sure Clayton felt really bad after it happened, that is so not him." His mom said "no, I don't think he felt bad about it at the time!"
this photo was used to create the painting below 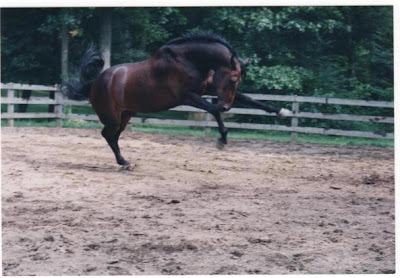 "PUNCH" is a 60" x 36" oil on canvas painting of Clayton by Patricia Powers. I would love to see the PUNCH painting in real life. As gorgeous as this replica is (scanned from a notecard) I am confident that it must be seen in full size to be truly appreciated. 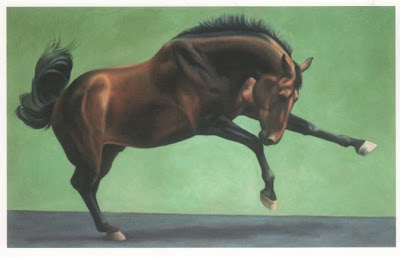 Clayton's personality is aptly described by his mom, she refers to him as the Wal-Mart greeter of horses. Clayton loves everyone and assumes that anyone he encounters, be it another horse, a person, or even a fainting goat, has come along to be his friend. I don't think Clayton knows what it means to be in a bad mood.
My favorite picture that I have taken of Clayton, taken almost a year ago on his second day with us. Clayton was being playful with Kennedy, note all four hooves are off the ground. Clayton had rolled and when he got up from his roll he sprang straight up into the air and did a 360 spin. 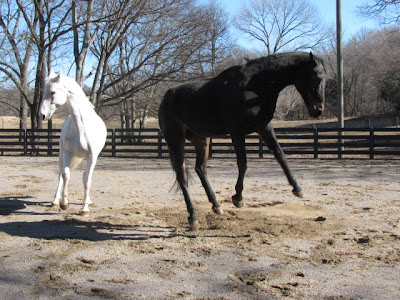 Clayton's kind and happy personality was put to the test several years ago when he was kicked just above the knee. This resulted in a spiral fracture and in infection. Clayton had to be tied in a stall for three months and could not be allowed to lay down. It was a rough time for Clayton and his mom. Thankfully Clayton pulled through and made a full recovery.
Clayton looking very focused at a horse show
(photo credit Bob Tarr) 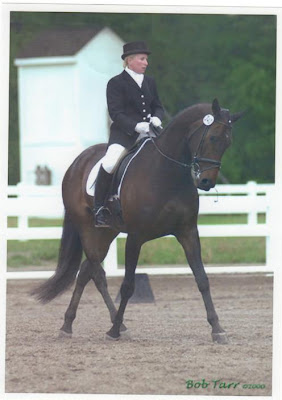 Clayton and his mom showed through first level and he showed through third level with his trainer. They did not do a lot of showing through the years and kept the focus more on training and enjoying each other. Six years ago Clayton started having some soundness issues and was diagnosed with ringbone. Despite the best efforts of Clayton's mom and her team Clayton was never completely sound again due to the ringbone and their riding days came to end.
Clayton with his mom and dad
(B. Cataldo photo credit) 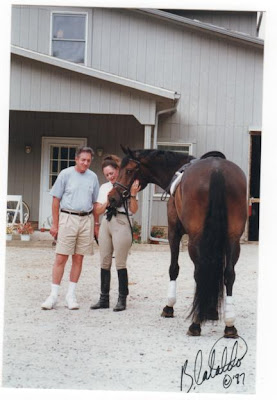 In some of the various pictures we have posted of Clayton on the blog you may have noticed that he is missing his left eye. A few years ago he began having reoccurring bouts of uveitis. He had a cyclosporine implant put in at Ohio State which helped for awhile, but eventually his eye had to be enucleated. With his laid back personality Clayton has adapted well to his circumstances. Most people who watch him in the pasture interacting with the other horses do not even realize Clayton is missing an eye. It doesn't stop him from playing hard and being rambunctious when the mood strikes him.
Clayton winning a high score award at 1st Level
(photo credit B. Cataldo) 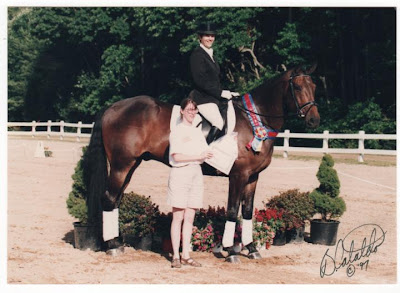 We met Clayton almost a year ago in January. His mom made the hard decision to not keep him in Ohio with her after 15 years of seeing him almost every day so he could have more turnout. Clayton also had to leave behind his girlfriend, a mare named Marlie who had been his neighbor for several years. His mom said one of the hardest things in her decision to retire Clayton with us was breaking up his romance with Marlie. Hopefully no one told Marlie that Clayton did not spend any time mourning the loss of their relationship. He wasted little time settling in and quickly discovered the joys of playing with Toledo and hanging out with Stormy. 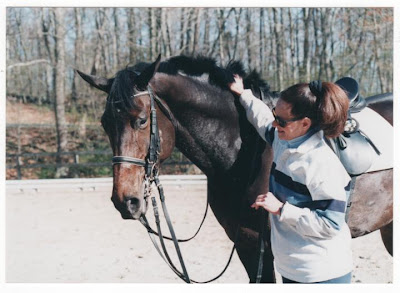 a couple of pictures from a schooling ride at home 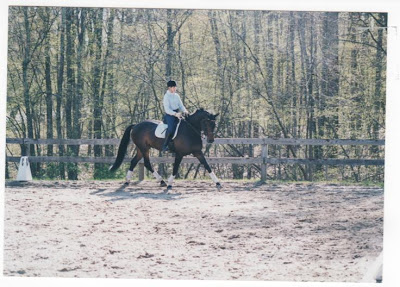 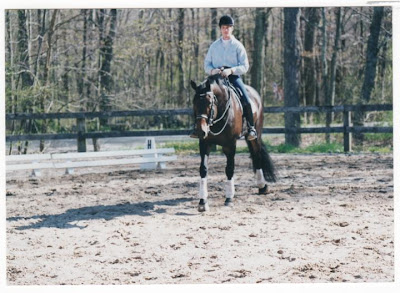 Posted by Melissa-ParadigmFarms at 7:22 PM

I love your blog and enjoy hearing about all the aspects/difficulties of running a retirement farm. I especially enjoy these Meet the Residents snippets! Keep them coming and keep up the good work!

He sounds fabulous. I almost feel like I've met him in person now.

A lovely horse and story - kudos to his owner for giving him a fine retirement!

The Punch painting is absolutely beautiful, I would love to have such a gorgeous painting of my horse.

One handsome boy! Thank you for telling us the rest of the story. And thank you to his Mom for having the wisdom to send him to you.
Love the painting.

I have had the pleasure to know Clayton and just saw his mom yesterday. Clayton is a wonderful boy and I love seeing him enjoying life! His mom always has taken great care of her horses. Thanks for the great write up. Thanks for your great place for special horses . Mosie