One of Those Weeks

We've had a few too many misadventures in the last week. It all started as we were driving along Highway 31 planning to run a few errands and eat some lunch last week. We were driving along chatting away and all was well. Then we crested a hill and there was a large mound of something in the middle of the road. We ran over it at 50 miles per hour, and in the process heard a very loud "smack" upon impact. The kind of noise where you know you just did some damage.
Jason immediately begins ranting and raving about the idiocy of people and humanity in general. Who leaves @##$%% in the road. What dumb @$^&*$ does that? I'm sure you can use your imagine to come up with something very similar to what he was saying. I'm trying to ignore him so I can listen to the very odd noise that is now coming from the car. I finally interrupt his tirade and ask him if we shouldn't pull over and ascertain exactly how much damage we just did to the vehicle? Finally we pull over into an empty parking lot. Jason gets out and is looking underneath the car. He launches into another tirade, complete with kicking the tire of the car.
He gets back in the car and tells me it looks like the shield underneath the car is broken and it is hanging down. He then proceeds to tell me that because I made him clean all of his crap out of the car a few days ago (Jason is a slob and I'm a neat freak) that he has no tools at all and can't do anything about it. Of course the whole thing is my fault now. We happened to be only two miles away from a Tractor Supply store where Jason could get some tools. It took us a long time to drive those two miles while listening to part of the vehicle scraping along on the road.
We make it to TSC, Jason goes in and purchases the tools he needs, and he proceeds to crawl under the car. Did I mention yet that it was raining? He is under the car in the dirty parking lot in the rain for about 10 minutes. He finally crawls out from under the car victorious with the broken piece removed. His mood improves instantly. Later that day we leave the car in the loving care of the Toyota dealer for repairs. We were laughing about it by the end of the day.
Jason crawling under the car in the rain 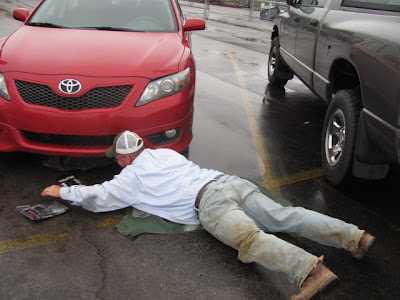 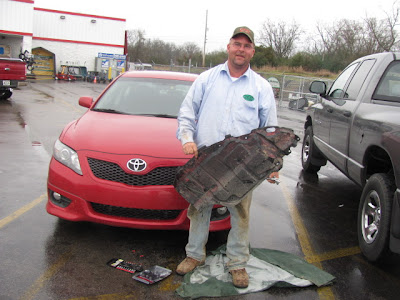 Today started out as a fine day. It was a sunny day and everyone, people and horses, were happy. We had just finished eating lunch when Jason's cell phone rang. It was the utility company calling to let us know they had just cut off the water at the farm. They had isolated a leak in their system and located it at our farm. 48,000 gallons of extra water will be on our bill this month. I'm not sure what was more surprising about that phone call. The fact that our water had been shut off or the fact that we had a 48,000 gallon leak.
The "good news" is when you are talking about that much water the leak is very easy to find. The leak was located at the main connection at the road, the pipe had become completely separated from the main county line. The county water line is six inch pipe. We are only about three miles from the tower, and are also about 500 feet below it. This means that we have water pressure of 180 psi where our one inch water line taps into the six inch main line. Now you know why it is even possible for us to have such a massive leak - and why we also have a pressure regulator installed at the main connection.
Thankfully after a trip to Home Depot and a couple of hours of getting wet and muddy Jason saved the day again. The leak is repaired and our water is back on. I didn't push my luck with any pictures as I had a strong desire to live to see another day. To give you an idea of Jason's unhappy expression today here is a picture I took a few months ago of Jason dealing with a different plumbing issue. Not a happy look is it? 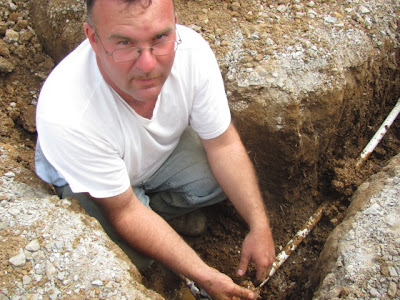 Sometimes I wonder if Jason wishes he were not so handy. When the car had its boo boo I would have just had it towed and had someone pick me up and give me a ride home. No crawling under the car in the rain dealing with it myself. As far as our leak I would have called a plumber. Aside from the fact that I am clueless about anything to do with plumbing I'm not good with anything involving tools. Jason gets nervous if he sees me so much as looking at a screw driver. Needless to say we are hoping for a few quiet, uneventful days - especially Jason!
____________________________________
Romeo 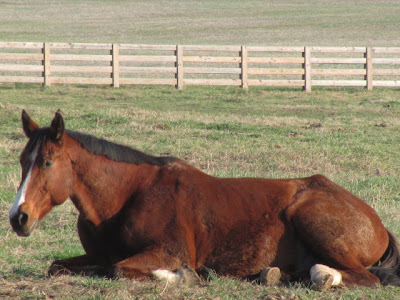 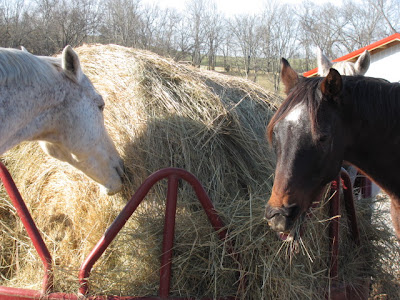 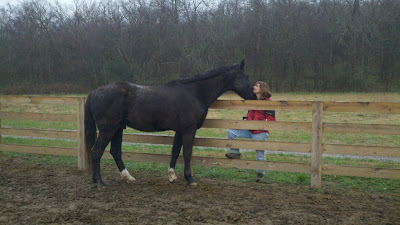 I always feel like I am being watched . . . probably because I am 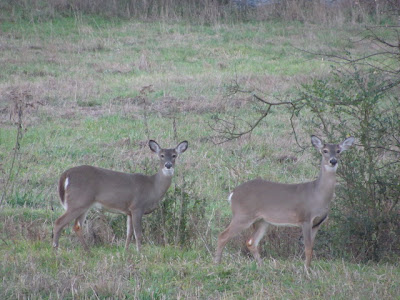 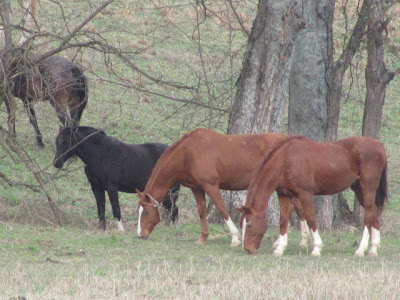 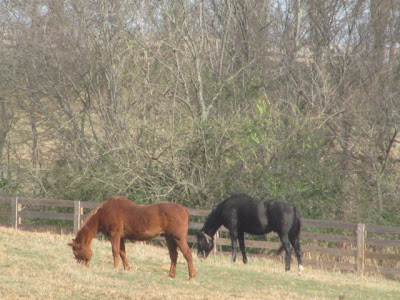 Wiz, Dutch and Murphy with Sam in the background 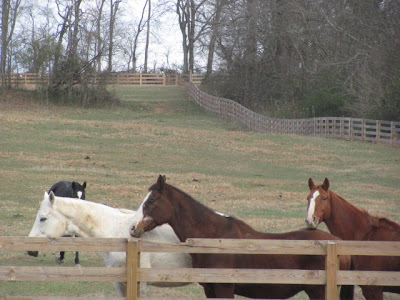 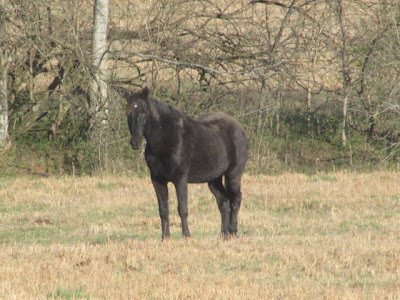 Posted by Melissa-ParadigmFarms at 9:12 PM

Hope the new year is better than this year's end ;-)

wow his pants are filthy! (and if you could see the carpet of my office right now at work, there are chunks of mud and bits of straw bedding pellets...and i never wear my work shoes to the barn so i have no idea how this happens.)

tools in the car? i can't stand anything in my car besides the required-by-law emergency kit (which must be replaced yearly because..? bandaids go bad?)

hey i just ordered those clippers after a whole emotional rollercoaster of finding out they're not made in europe and then finding them in america, and then finding out the shipping/customs is an *additional* 150.00. somehow i discovered today they go by another brand - heiniger "the mercedes of clippers" and i found them for only 250Euros, no shipping, and they ship today and should arrive tomorrow. i have to say that is one thing about germany - mail orders take only 1-2 days. i'm so excited! now i wish you'd do a blog post about clipping technique..or maybe point me to some websites? and what is the tensioner for anyway? oh, and baasha's blanket hood arrived today so we're ready! oh, but ...how clean EXACTLY must he be? it's kind of cold for bathing.

Lytha you do want to get Baasha as clean as you can. Dirt will dull the blades and also make it harder to do a "clean" clipping job without lines. Usually I bathe, wait until they are no longer dripping wet but are still wet, and start clipping. I much prefer clipping a wet horse than a dry horse. I feel like I do a smoother clip job and the wet hair isn't flying around in my face. If it is too cold to bathe I would curry and brush very thoroughly before starting.

Jason and Pete are two of a kind- why call someone if you can fix it yourself? Luckily, both of them CAN fix everything themselves! We had the same water leak thing with a $600+ water bill from where it was leaking up by the road. I called the water utility company and they said that if we fixed it (Pete fixed it, of course) and they knew it was a leak and we didn't use all that water, they would not charge us. All we had to do is supply proof that it was fixed. It's worth a try! Happy New Year!