As everyone knows I love warm weather and truly despise cold weather.  However there is one downside to the grass growing, the birds singing and warm temperatures.  The horses can make feeding time very frustrating.  They are spread out all over the pastures grazing instead of hanging out around the hay feeders by the gates.

Morning feedings are typically easy.  If they aren't waiting at the gate for breakfast they typically come quite promptly, often at a gallop, when called.  However all bets are off for dinner.  They know when you are feeding breakfast in the morning that without a doubt they are going to be fed.   After breakfast we are in and out of the pastures for various reasons such as catching horses for grooming, for the farrier, etc.  Thus when you start calling them for dinner you are lucky if anyone even lifts their head.  Apparently if they are not 100% sure you are calling them to come eat they aren't going to come.  Some groups are more difficult about this than others.

On Friday afternoon I was hiking through the pasture calling Murphy, Wiz, Fuzzy, Darby and all the names over and over.  Their pasture is large and I couldn't even see the horses so I started walking.  I had our schipperke Bear with me on a leash.  Bear hurt his back a few weeks ago and has been on a serious medication schedule as well as on crate rest and house arrest, going outside only for bathroom walks. Needless to say Bear had a lot of pent up energy and had been bored out of his mind.

Last week he was allowed to start increasing his exercise with walks around the farm on the leash.  So Bear and I were walking through the pasture calling the horses who were nowhere to be seen and totally ignoring us.  Finally we spot them behind the woods, as far away from the gate as they can possibly be and still be in their pasture.

Bear and I cross through the woods and I'm thinking that surely they will start heading to the gate now that I am standing right in front of them screaming their names.  No one even lifts their head from grazing so I start waving my arms and yelling at them to get moving.  A couple of them raised their heads to watch the crazy person flapping her arms around.  I continue my crazy person act and finally a couple of them start walking slowly towards the gate.

About this time Bear decided to do his best imitation of a horse pulling back.  He pulled back on the leash and popped out of his collar.  I stood there holding the leash attached to the empty collar while Bear seized the moment and took off.  He decided to run right through the horses with me running after him in hot pursuit screaming "Bear, come back here NOW!!"

Of course the willful little dog ignored me and kept running.  The dog and the screaming person running through their midst really got the horses moving though.  They took off at a gallop - in the wrong direction.

Great.  Now I have the dog running in one direction and the horses running in another.  I kept up my pursuit of the dog.  However he has gone a month without freedom and isn't about to give it up now.  He is having a grand time as I wear myself out chasing him across the pasture. The little jerk ran under the fence into the next pasture.  Thanks to our lovely strand of hotwire along the top board of the fence I can't climb over to keep up my pursuit and by the time I ran to the gate and went through he was going to be long gone anyway.

I screamed a few things at no one in general (since the dog and the horses have all run off and I have no audience) and start back across the pasture to make another attempt at herding the horses to the gate for dinner.  This time they can tell I'm feeling pretty crusty, my tone of voice must have said "don't mess with me" and as soon as I approached they started moving towards the gate.  All was going well until a little black blur named Bear went streaking past me.   The horses sense my distraction as I try to decide if I should make another go at recapturing the dog or keep herding them, and they took off running back to where I had originally found them.

I screamed a few more things at no one in general since, yet again, I had no actual audience to listen to me.  I make my way back to the horses and scream "geeeeeeettttt out of here" and they wisely realize I am about to snap and run to the gate and wait for me.  Why couldn't they just do that the first time?

Bear sat well out in the pasture and watched me feed the ungrateful horses, gloating in his freedom.   Once they were fed I began walking across the pasture again to try and retrieve the dog.  Like the horses, Bear seemed to realize from the way I stalked towards him and my tone of voice that the smartest thing he could do would be to relinquish his freedom.  He finally let me catch him and he trotted along next to me on his leash as we exited the pasture.  My tour of duty attempting to herd cats was over for the day.

Thankfully Bear seems to be none the worse for his escapades. 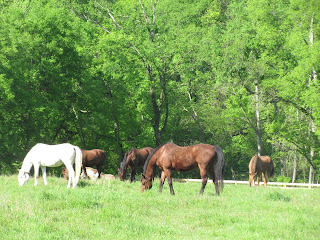 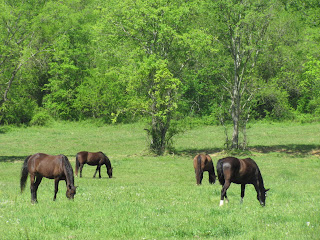 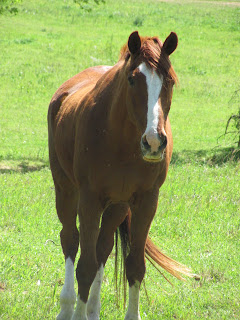 Rocky and Toledo were having a grooming session . . . 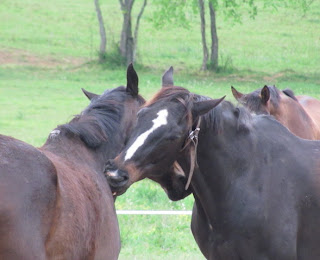 . . . that turned into playtime 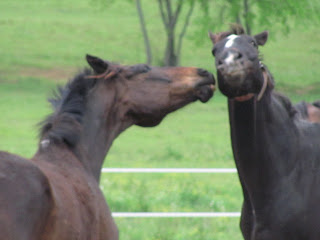 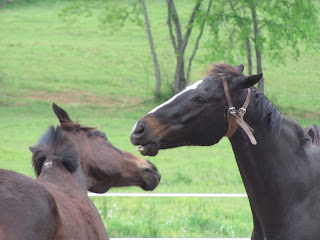 Apollo and Thomas chatting over Hemi's back 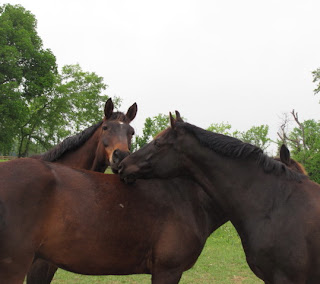 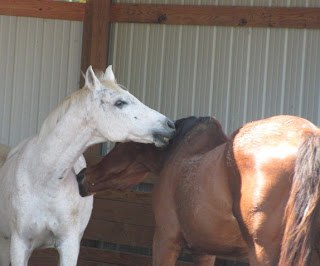 Posted by Melissa-ParadigmFarms at 9:57 PM

I have been left holding a leash and empty collar on more than one occasion! I hate trying to do leash-only walks as I think it makes most dogs do more potentially problematic movements (bounce, bounce).

Silly horses. Maybe you could try training them with a dinner bell so they associate that with meals, as opposed to the other daily chores they have to do, lol.

As an owner of a Jack Russell terror, whose outings always involve leashing, I relate to your frustration. When Q tastes freedom - it's a major task to round her up again. :)

Bet you were using some choice language! (I would have been)

Maybe a bell or whistle that you use only to call for feeding... Never cheat and use it for "ne-farrier-ous" purposes.

I usually only call a horse to feed them, so they are pretty good. I don't use their name if I am going out to catch. They often still come up, though ;-)

I've found collars to be highly untrustworthy. A harness works great at staying put, with the added bonus of the little maniac not choking to death.

I've actually tried the whistle used only for feeding approach before. Works fine on the groups that already come. The two groups that routinely refuse to budge ignored it. Figures!

GreyDrakkon I like harnesses better as well but unfortunately Bear long ago mastered the art of twisting his head around and chewing a part of the harness in half so he could pop out of it. If you turn your head for five minutes (say to chase a horse) he's out of the harness and off to the races. He is a willful little dog, good thing we really love him!!

Jeeze, you'd have to fashion one out of chains to foil him! Heh, what do ya think, would he enjoy a badass "too much dog to be contained by less than metal" look? ;)

GD thanks for the laugh. Bear is definitely a legend in his own mind!!