I've considered off and on posting about life in general lately.  For any number of reasons I've kept this blog mostly farm related but after much consideration I am going to make this post more about my life in general.

One thing about life is it is never static.  Sometimes life changes are fun and full of joy, sometimes changes leave a deep hole in your life that have you wondering if that void can ever be filled.  Jason and I have experienced both in the last few months.

I'll start with the joy.  A few months ago Jason and I had a new addition to our family.  We brought home our new son, Carter, from Moscow, Russia a few short months ago.  Adoption was a beautiful but long journey for us.  We began the process 18 months ago and made three trips to Russia during that time. In the end all of the waiting, hoping, and worrying was all worth it.  I will sound like the typical biased parent and say that our son is the cutest little boy in the whole world and we could not be more proud of or in love with him.

It is amazing how having a child enhances every part of your life.  It has been such a joyful experience to incorporate him into our daily lives.  He loves the farm, the horses and the equipment.  I'm looking forward to proudly standing beside my future leadline champion in the ring some day.  In the meantime it has been fun to share our daily lives with him as it is like seeing the world through new eyes.  We are also the luckiest parents alive because he sleeps 11 hours straight every night and we have never missed as much as five seconds of sleep. 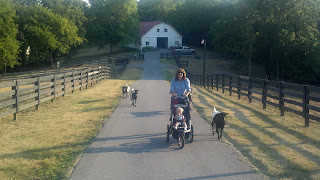 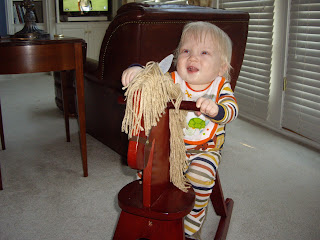 petting the "horsies" on the empty bags of feed 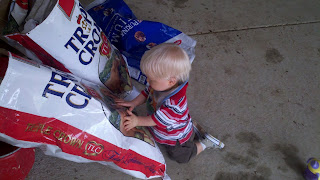 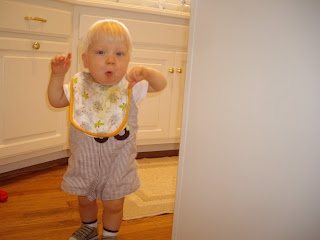 I'm cute and I know it 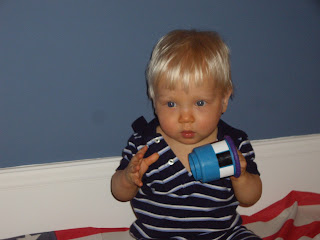 petting Sky; Sky and Carter really like each other 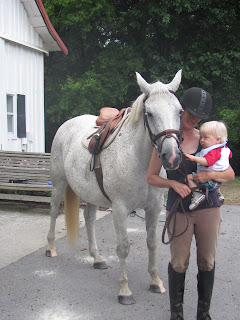 On to the harder things.  Just a few days after arriving home from Russia with Carter our family received the devastating news that my dad had Stage 4 cancer that had already metastasized to multiple areas and that he would not be a cancer survivor.  He began chemotherapy as his type of cancer can respond well to chemo.  Although it cannot be cured it can be treated and prolong his life expectancy.

Anyone who has ever met me has basically met my dad.  I am, for all intents and purposes, his Mini Me.  If you looked up "Daddy's Girl" in the dictionary you would see my picture. I've been blessed to have a close relationship with both of my parents and they have always been my biggest supporters and cheerleaders.  My Dad is the type of person who has a larger than life personality and a big heart and he is loved by many, and most of all by my mom, myself and my sister.

As my Dad always does he he put on his game face and proceeded on to chemotherapy treatments.  No matter how bad he felt or how sick he was he would cheerfully answer he was "fine" whenever anyone would ask how he was doing.  I basically threw a temper tantrum and had to get down on my knees and beg him to ask for pain medication which he finally did, all while insisting to my Mom, sister and I that he was fine.

Despite all the dire predictions from his many doctors I think we all had ourselves convinced that Dad was going to beat the odds and come out on the other side.  It is just what he always does in life.  Even as we watched him lose more than 40 pounds in a few short weeks.  Even as we watched his hands shaking from pain.  Because he kept putting on the brave face and insisting that once he got through his chemo he would be fine.  So even though we knew that wasn't the case we all and he wasn't going to be fine we all sort of sort of halfway believed it.

Until today that is.  Very early this morning my phone rang and my mother sobbed into the phone that I needed to get to their house now.  As most of you know my house is just down the driveway from their house so I was there in about a minute.  I found my dad passed out in a chair with extremely slow and labored breathing, to the point I thought every breath might be his last, and my mom understandably crying hysterically but thankfully on the phone with 911.

Today my worlds collided and all of my experiences in handling emergency situations with the horses kicked in.  I learned a long time ago to take the emotion out of the situation and stay calm.  Running around in a blind panic accomplishes nothing but wasted time.

I took the phone from my mom.  I lifted my dad's sagging head up and held it upright in my hands trying to give him every chance to breathe.  I talked to the 911 operator. I feel terrible for how I spoke to my poor mom but I barked orders at her like a drill sargent.  "Unlock the front door!  Go get dressed NOW!  Hold dad's hand and speak to him calmly."  I talked to my dad hoping he could hear me.  I told him that it was my hands he felt on him and that I was there.  I told him help was on the way and I needed him to keep breathing.  I told him that was mom's hand holding his hand.  I told him that we were there and everything was going to be ok. I prayed silently that he heard me, I prayed even harder that the ambulance arrived ASAP, I prayed for him to live because none of us are quite ready to let go, especially not like this.  I kept asking the 911 operator for updates on the ambulance's location because every gasping breath my dad took felt like it was going to be his last one.

Thankfully the ambulance arrived within 10-12 minutes and my dad was loaded onto a stretcher and whisked away with my mom riding with him.  He is now in the ICU and we don't know what the future holds.  The good news is he is now conscious, lucid and talking.  Unsurprisingly to anyone that has known him more than five minutes he is also insisting that he is fine and can go home despite the fact that he is so weak he can barely talk in a whisper and cannot sit or stand.  His doctors think all of this is due to complications from his chemo this week and the odds are in his favor to pull through this and get his wish to go home.  I hope they are right.  The only thing harder than watching my dad go through his battle with cancer has been watching my mom try to come to terms with it. I would sooner trade places with my dad than my mom.

All in all life has been full of life lately.  If I miss a blog or two everyone will now know why.  As I told a close friend recently the days have been fine and business as usual with working on the farm.  It is the evenings and weekends that have seen all of the changes and that is when I do my blogging.   I'm thankful to spend my days in the company of the horses, it is truly a blessing.

Gus and Silver waiting to be fed 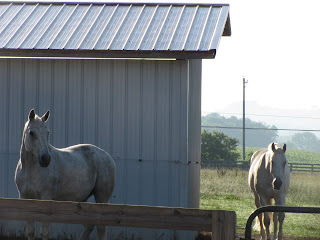 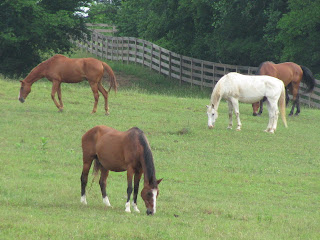 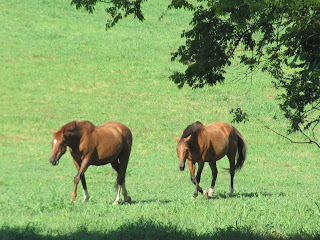 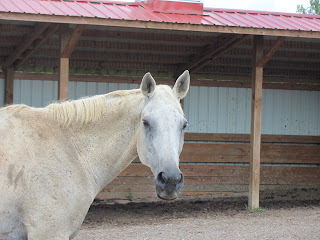 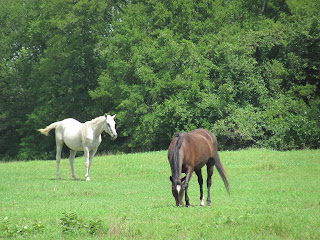 Silver, Gus and George having a multi-way grooming session 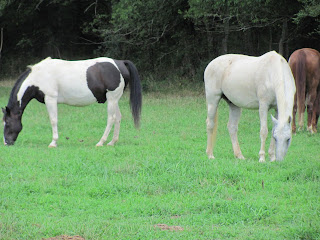 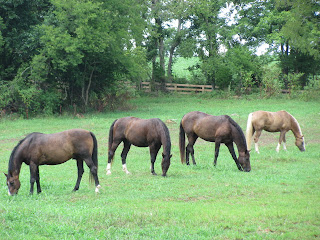 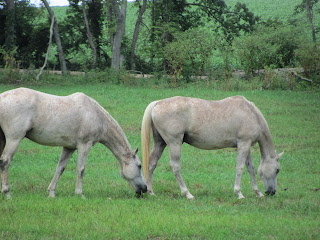 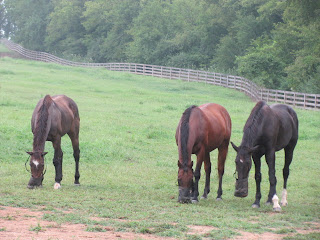 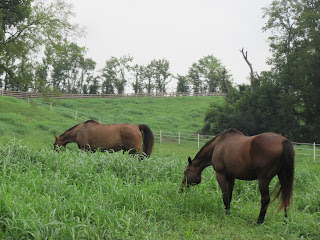 I will be keeping your family in my prayers!

Your son is absolutely beautiful. I am so happy for you and Jason!

Please let your dad know that prayers are being said for him all the way across the world from Sydney. He sounds like an amazing man - I truly hope that this takes as little toll on your family as possible.

Happiest and saddest all at once . . .

Congratulations on your son - how wonderful for all three of you!

I am so sorry about your dad - it's never easy. Sending thoughts and prayers to your family.

Thinking of you today.

Your dad obviously raised a pretty great gal. Thinking of you and sending love.

We read this early this morning but then came back to the blog to find that Dad has passed away. What a fine tribute you have given to him in just the few words you wrote in this blog.

Carter is an adorable boy. Congratulations on your new son. We find here that young life does help when the old'uns pass. Thinking of you today. xoxoxoxo

Thoughts and prayers for you and yours.

Carter is adorable, and you are such a secret-keeper.

I feel your pain deeply as I was Daddy's Girl too.

Don't know how I missed this post. So happy and so sad at the same time.

Your son is simply beautiful. I hope he helps soften your loss just a bit.

My thoughts are with you. May your father rest in peace. (((hugs)))