I was scrolling through some old posts looking for something I had written a few years ago when I stumbled upon one of our farm building posts. Almost exactly four years ago today Jason and I found the mother of all rocks on this farm, after not hitting so much as a pebble during the first rounds of building.  Re-reading that post made me very glad that we are largely done with major building projects. The small ones are bad enough. Since I can now see a glimpse of humor in the whole experience I thought it would be fun to revisit this miserable project.

The saga of the rock continues. For anyone keeping a running tally the score goes something like this: Rock: 2 Jason and Melissa and any plan they come up with: 0 You have no idea, none, how sick I am of this stupid rock. For those of you wondering what on earth I am talking about you should read the first post on our encounter with this rock. As you know this rock already defeated the 4 ton Ditch Witch. We called in the big guns. The guy with the backhoe (I should add here a very LARGE backhoe) came yesterday. He started pounding away at this rock with his large backhoe. I'll sum it up with the following score: Rock: 1 Backhoe: 0 Someone in the comments section said she and her husband graded rocks using the system of "softball, basketball, volkswagen." I would like to add MACK TRUCK to that grading system. After never finding so much as a pebble at the new farm we find ourselves to be the proud owners of the Mack Truck of rocks. Reminder: a couple THOUSAND fence posts, 1 barn, and 3 run-in sheds later not so much as a piece of gravel. And now Jason has met his nemesis. You have to understand, Jason hates rocks. He hates rocks of all sizes. From the softball to the Mack Truck all rocks are evil in Jason's world. We spent years searching for a farm because after the last few years of dealing with the family farm and its abundance of rocky soil Jason made a Scarlett O'Hara vow. Except instead of saying "as God as my witness I will never go hungry again" Jason modified this to "as God as my witness I will never pick up another rock again." Needless to say the Mack Truck of rocks has wiped the smug smile off of Jason's face - the one he used to have anytime he bragged about his beautiful topsoil. The irony of it all is that this rock is located in top soil. Even the backhoe guy couldn't believe it. He kept saying "we're still in topsoil, this shouldn't be here." Uh, look dude, we've already discussed extensively that this rock shouldn't be here, you're here not to tell us the obvious but to get the #$%^&! thing out. He starts pounding away at this thing with the bucket. Literally pounding at it. After a loooong time (and of course we have to pay for this by the hour) and much pounding he's managed to break off four large sections of this rock and we're nowhere near the bottom of Mt. Rock. After getting these four pieces of it busted out all progress stopped. It didn't matter what he did, how much power he put into it, how many times the big bucket slammed into this thing it wasn't budging or breaking. And it was too big to attempt to lift out of the ground even with the big backhoe.

The only chunks that were removed from the offending Mt. Rock. This picture simply does not convey the size of these pieces of Mt. Rock. We can't even move them with the 60hp tractor. Jason said if we brought the 100hp tractor down wemight be able to push them with the bucket. So here they sit, blocking the area where they were supposed to start putting gravel to extend the driveay. You just have to love this rock. 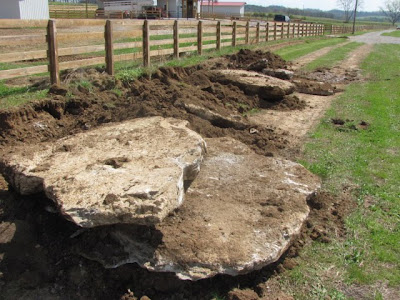 Finally the backhoe guy waves the white flag at the rock and surrenders. We had already tried to go around the rock with the ditch witch this weekend in the area to the right in the picture above. They ended up having to trench a little detour to the left in the horse pasture. No rock there. It took a few minutes to dig the detour trench, the water pipe was put in, the trench was covered back up, and the water line was ready to go.
Then backhoe guy had to leave as he had another job to get to. He had anticipated only being at our farm for a short while. Just get the rock out, easy as pie, done. Hahahahahahaha. A few hours later he has to go and we're stuck with pieces of this boulder blocking the area where the gravel guys were supposed to start extending our driveway. I guess that has been delayed until backhoe guy can come back and drag/push our boulders off to the woods or something.
There is a lot I would like to say here but I won't. I could mention that we really didn't have to go to all of this trouble since we had already gotten down far enough with the Ditch Witch to bury our water line before we hit the rock but I won't. I could mention that we could have just tried to trench around it on both sides, not just one, with the Ditch Witch but I won't mention that either. I could mention that not only have we paid for the ditch witch and several hours with the backhoe, but now we're going to have to pay someone to bring in a load of soil to fill in the crater left by the removal of the boulder-sized pieces of this rock, all over someone's fixation with water lines being 2 feet in the ground. But I won't mention that either.
In other news related to this freaking water line it is finally in and ready to go. Of course given how other things associated with this line have gone this didn't go just as smoothly as it could have either. Jason was working away in the ditch getting filthy and gross while doing all of the plumbing to tap the new water line into the old one. Then there was a small problem.

This is not the face of a happy Jason; we've seen this face a lot lately 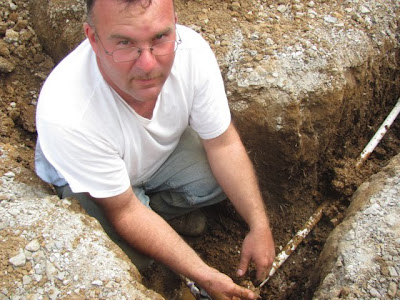 If the boulder wiped the smile off of Jason's face this made it disappear completely for awhile. It has been a trying week. I am happy to say that all is working properly now. 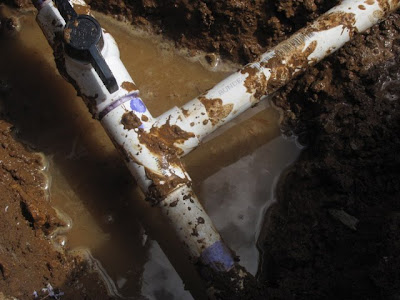 I don't even know what this was all about. I think it was just Jason taking his frustration out on something. I would hear sawing and then "bleep!" Then "Melissa find the hammer - now!!" So then we had sawing, "bleep," hammering, "bleep, bleep!" Like people rubber necking to look at a wreck on the interstate the horses start to gather at both gates to watch the crazy people. They could have cared less about the backhoe and rock pounding, but gosh they love to watch us when we get worked up over something. Apollo says "Look Ivan, they're starting to wave their hands around and yell again." 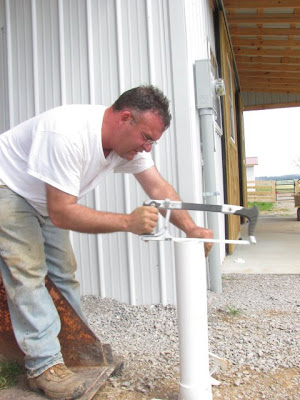 As you can see this section of pipe was sawed and hammered into pieces. I don't know why or what the purpose was. I just stopped asking questions at that point and watched along with the horses. 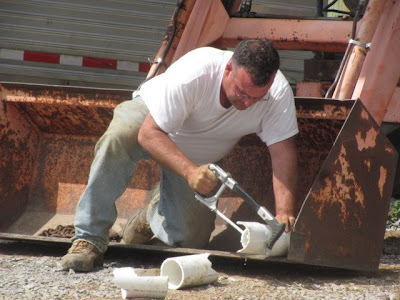 We now have another 1200 feet of water line. It works properly. We have some lovely new landscaping pieces to work with. My mom suggested maybe a landscaping company would want our boulder chunks as apparently sometimes these are used in landscaping design. I said "Mom, the problem is they wouldn't own a piece of equipment large enough to move them. I think we are stuck with these things for life." Hopefully backhoe guy will return tomorrow to move our new landscaping features out of our driveway.

For anybody who cares the small update to this story is that the backhoe guy did come back and push the rocks out of the way. They have spent the last four years residing in the bottom of the creek that runs through the farm. They seem pretty content there. Occasionally Jason curses at them when we have a need to cross the creek, although he grudgingly admits that they have made useful stepping stones for that purpose. 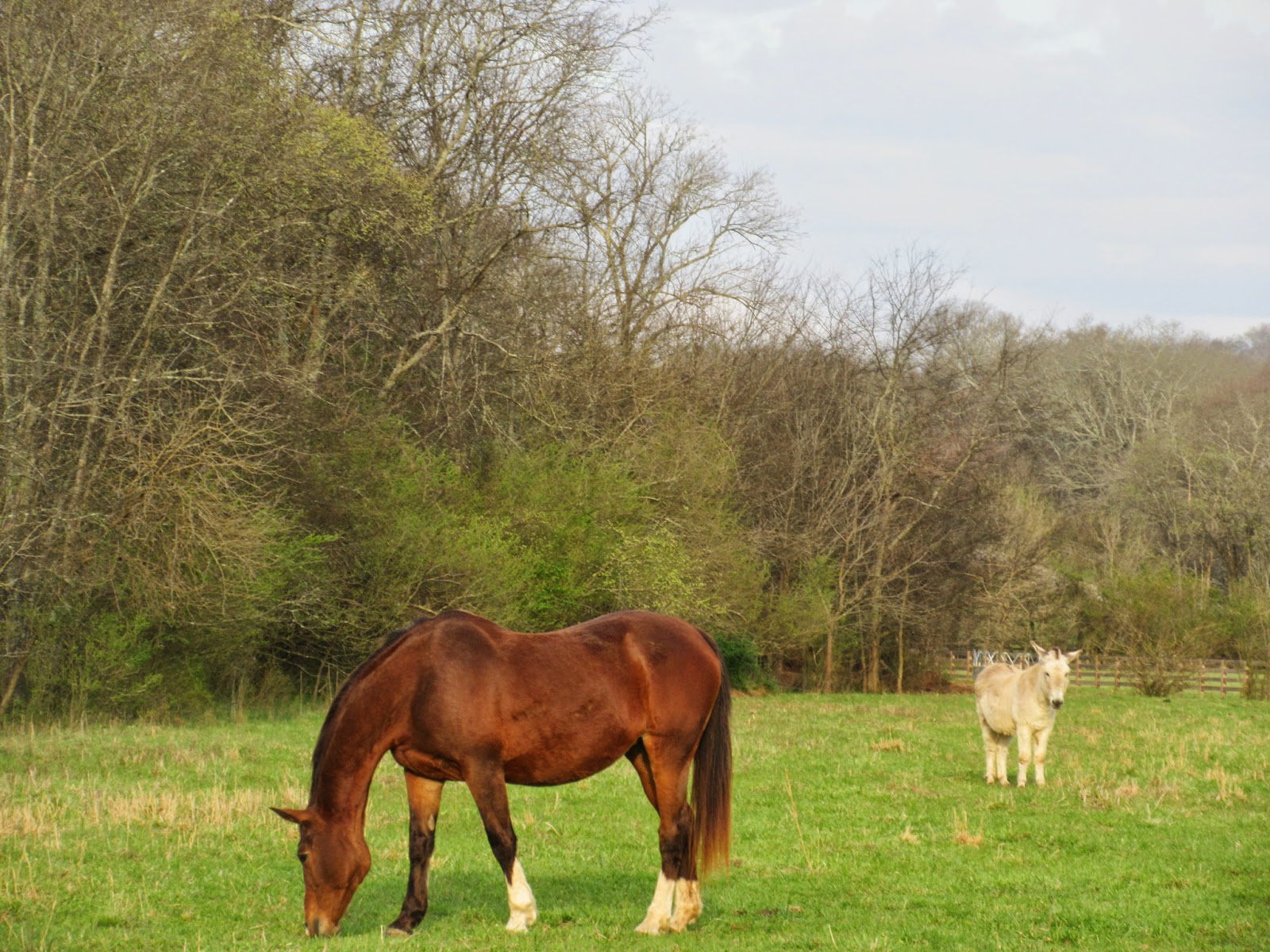 Toledo, Donovan and Kennedy were all playing 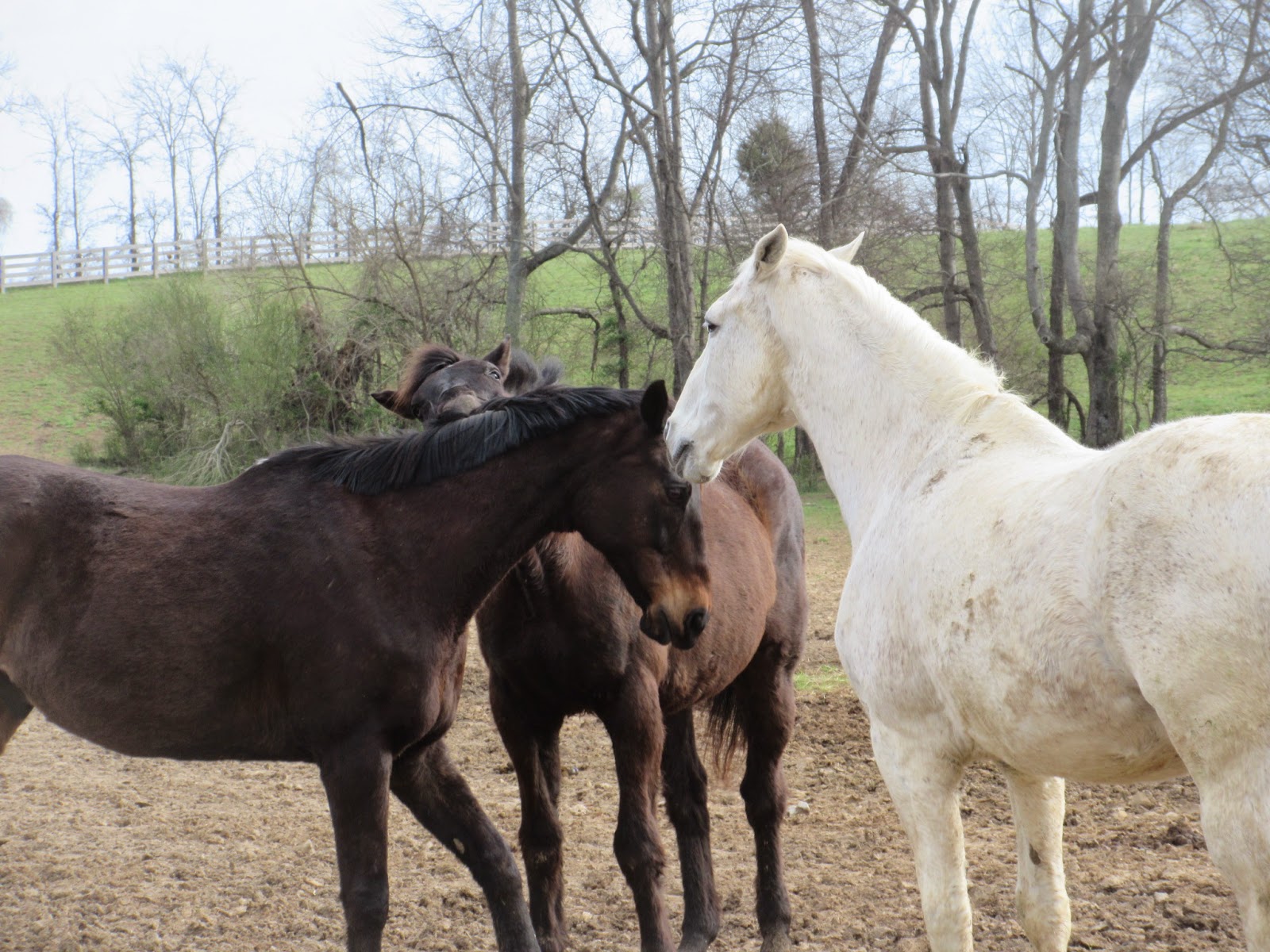 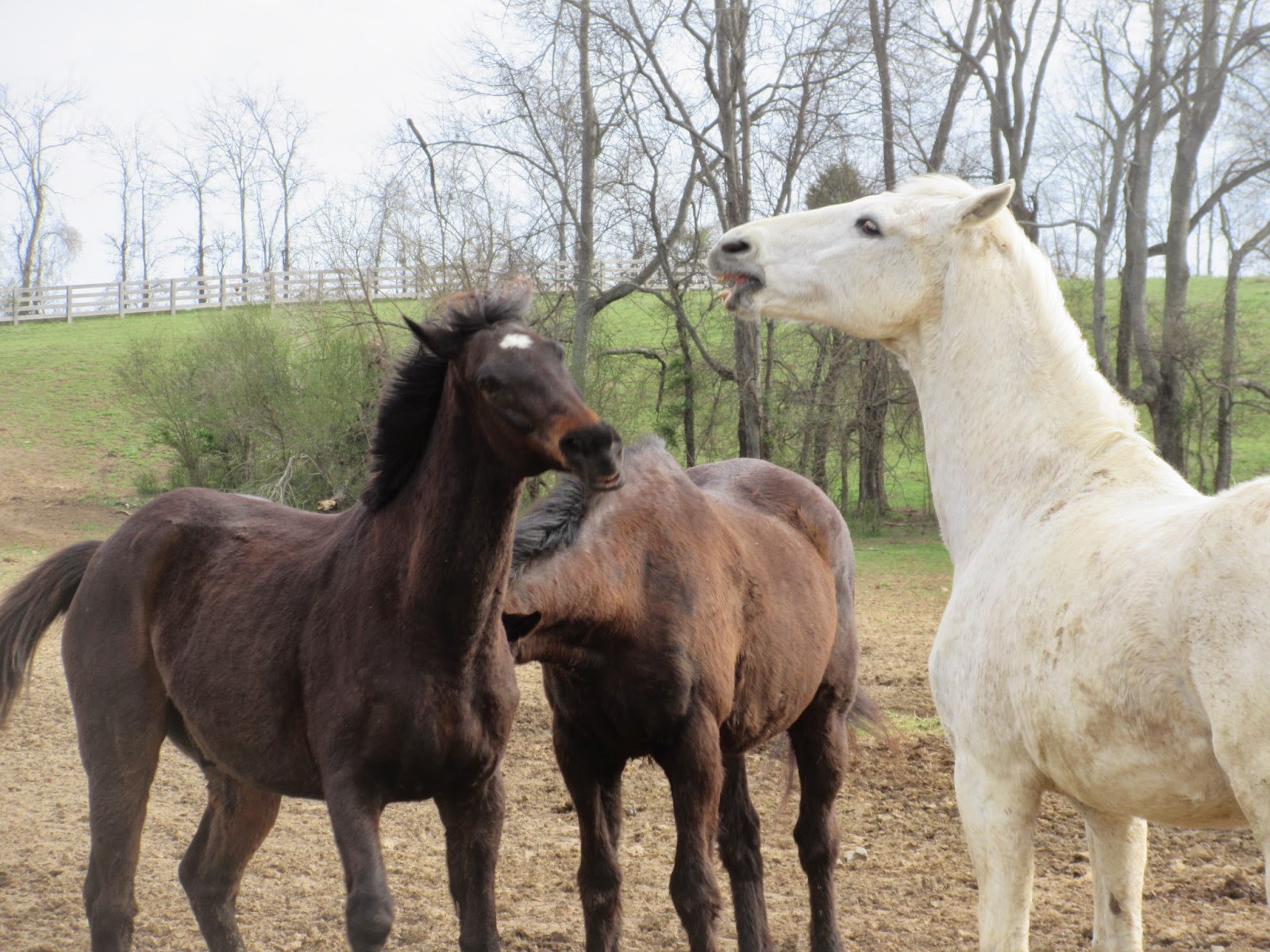 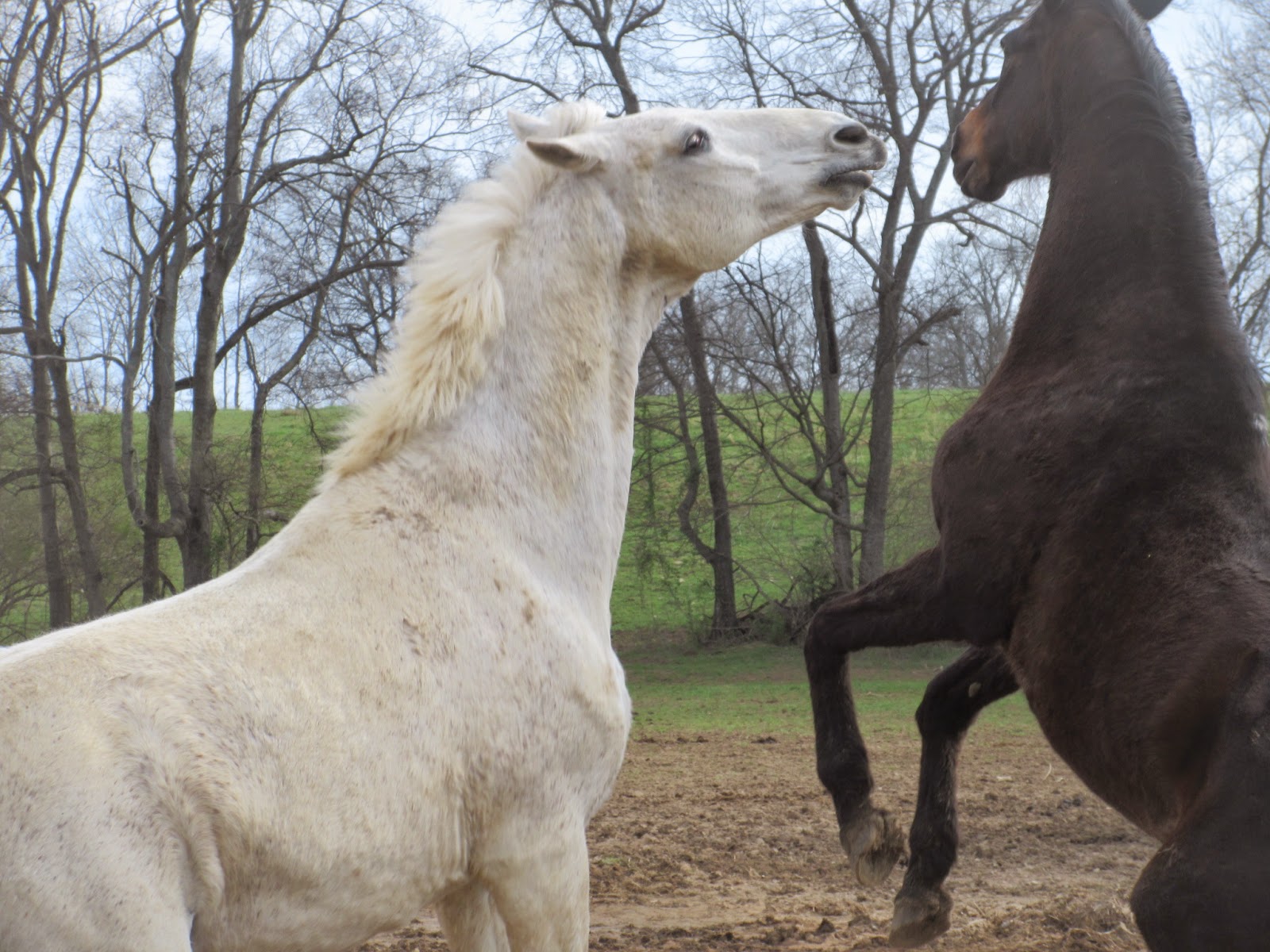 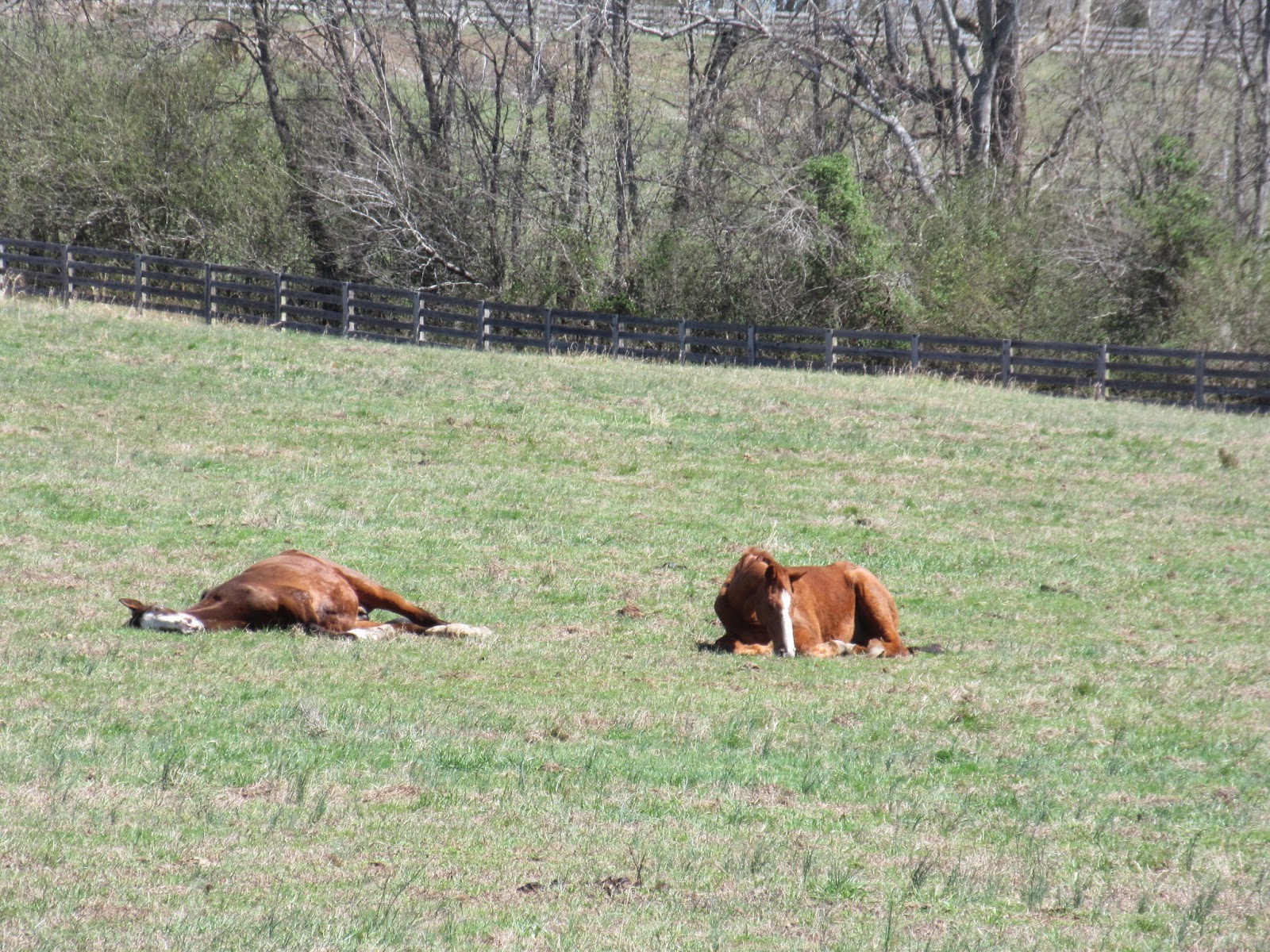 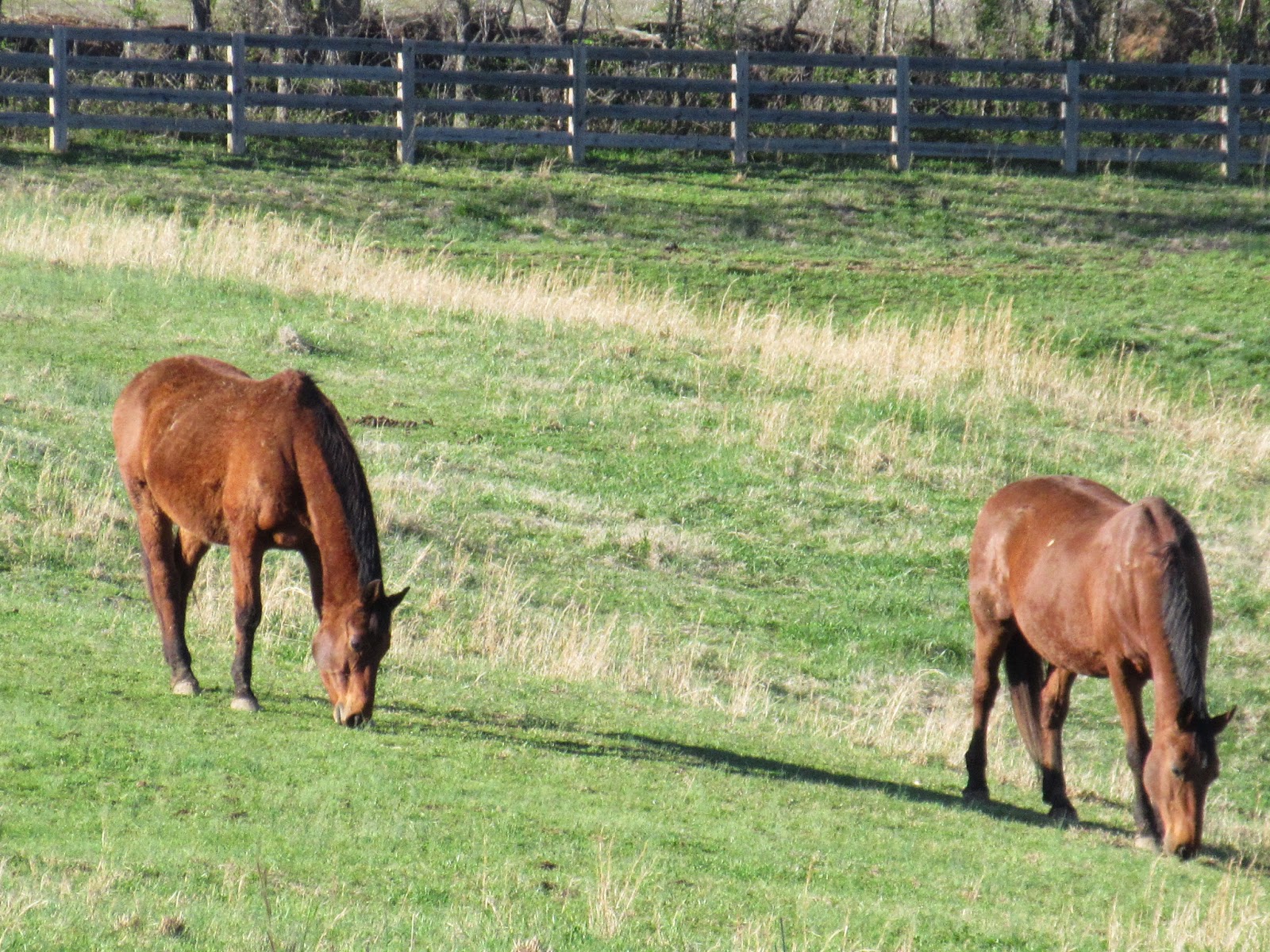 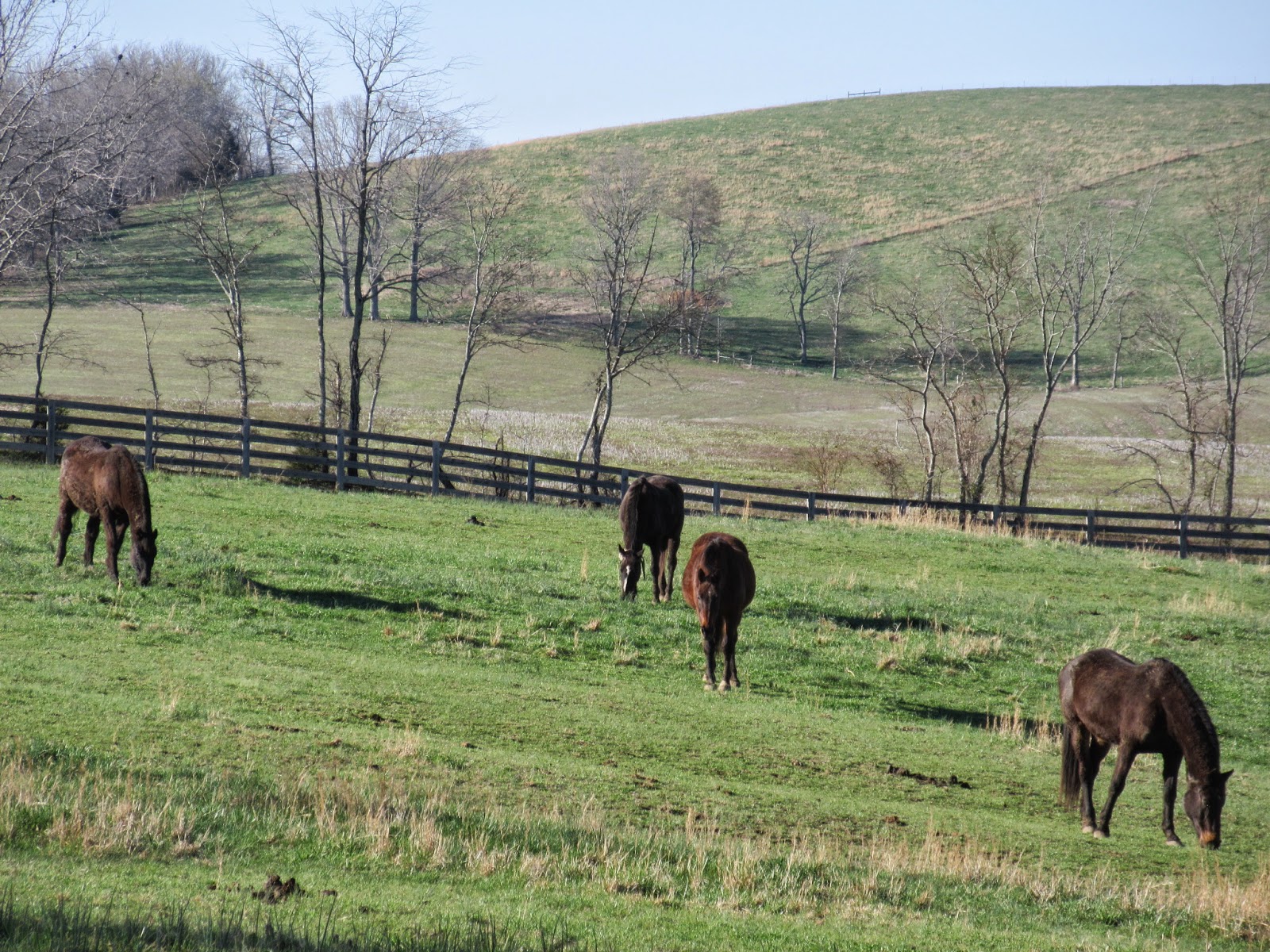 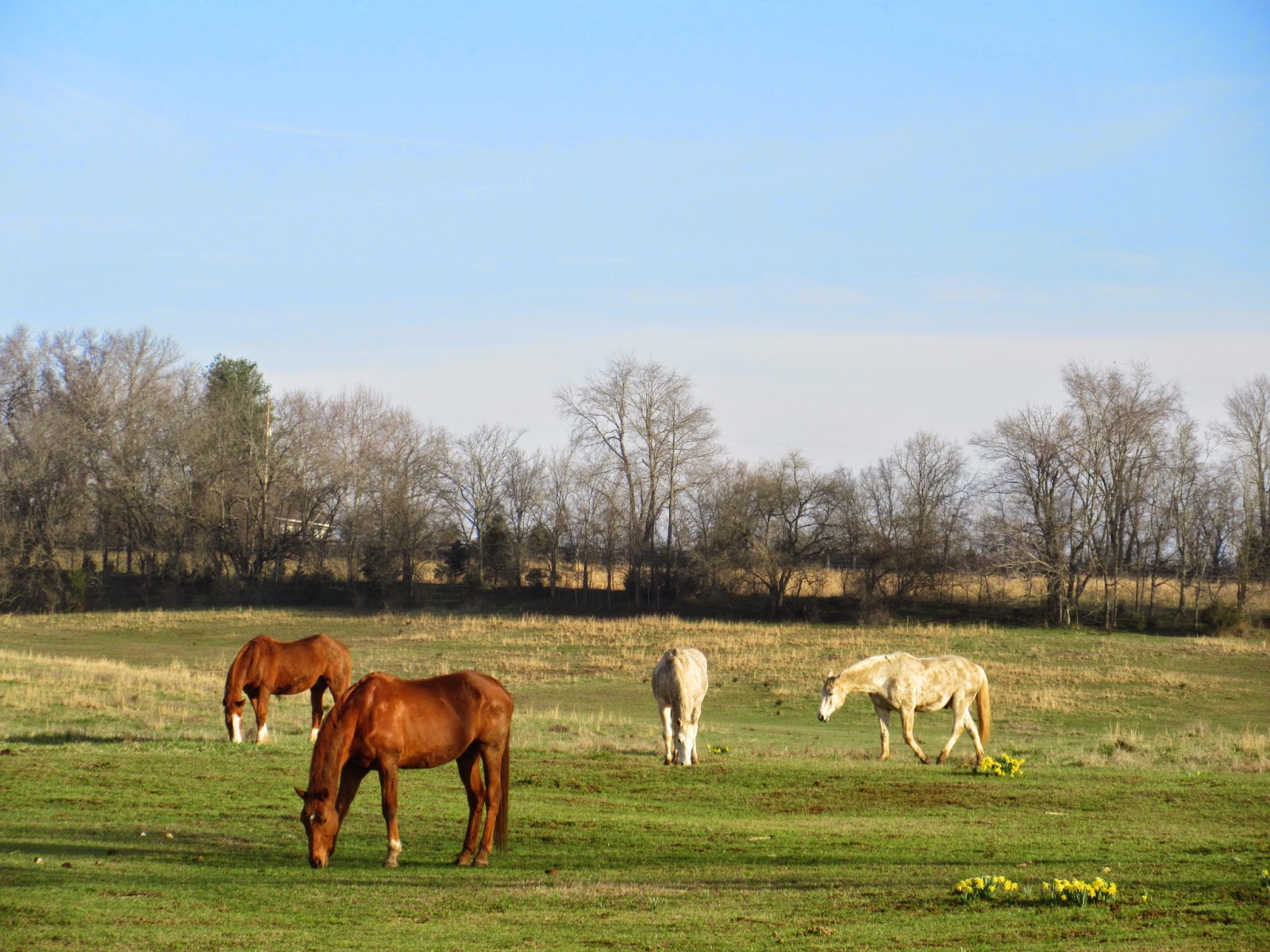 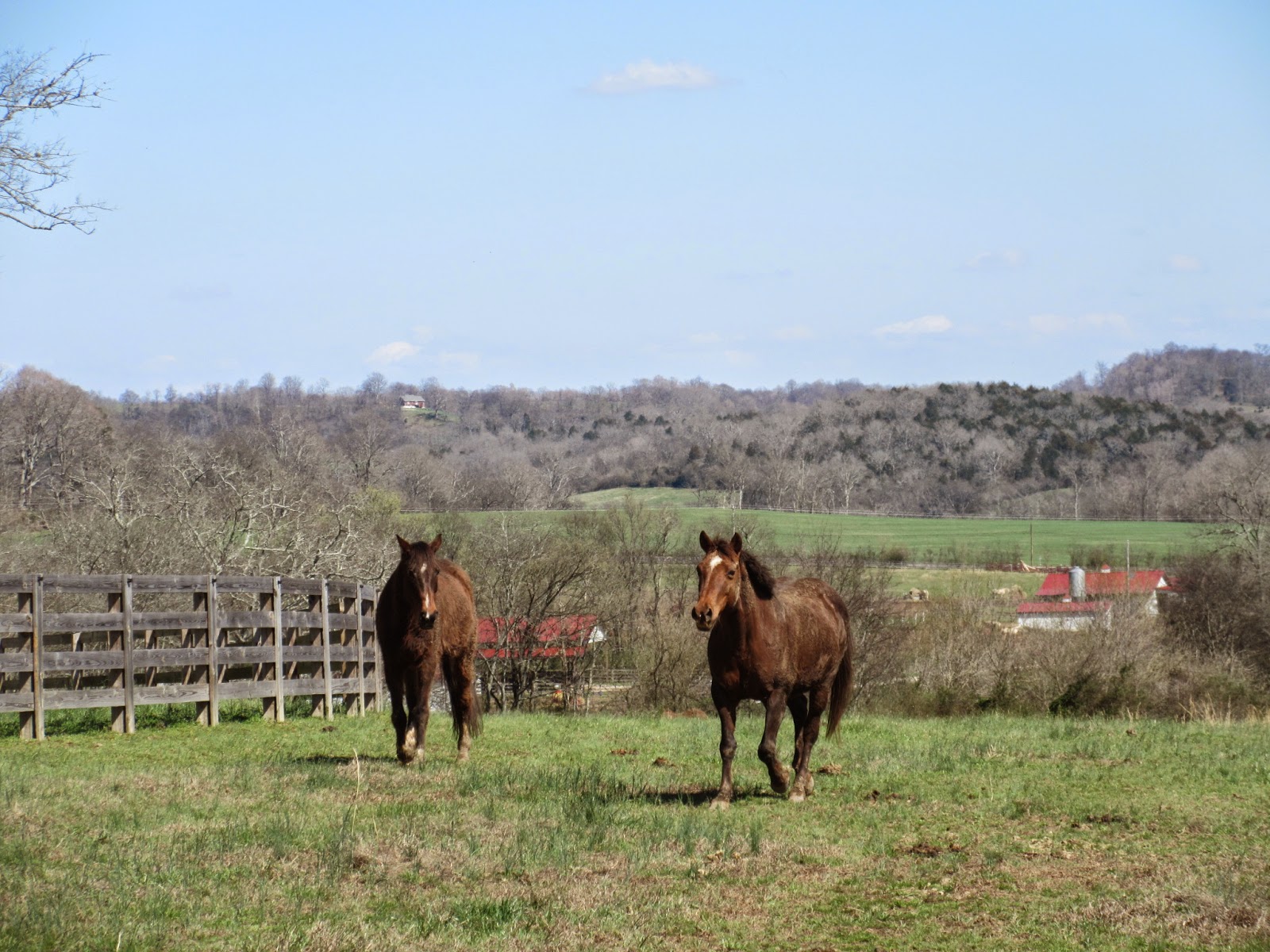 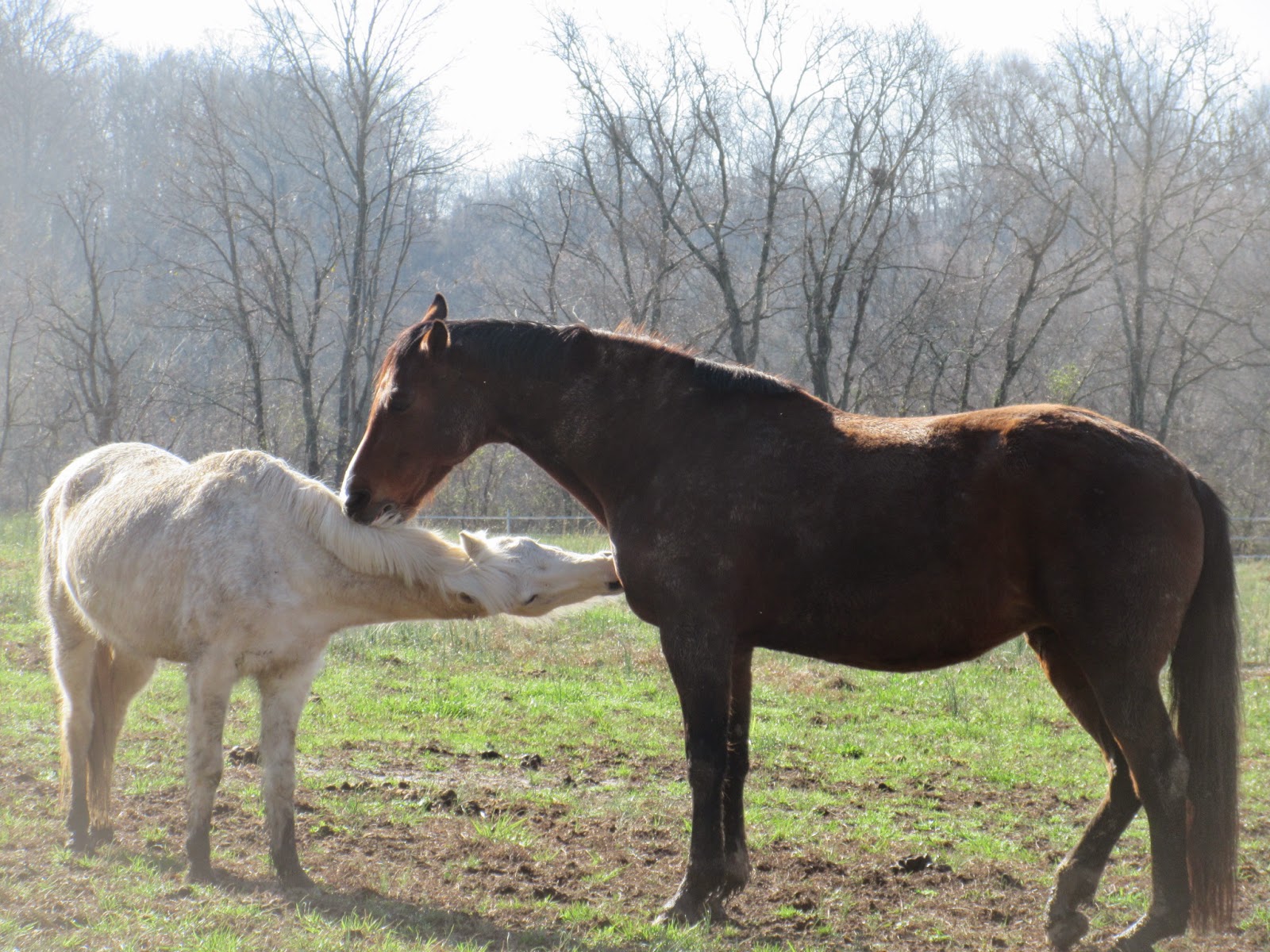 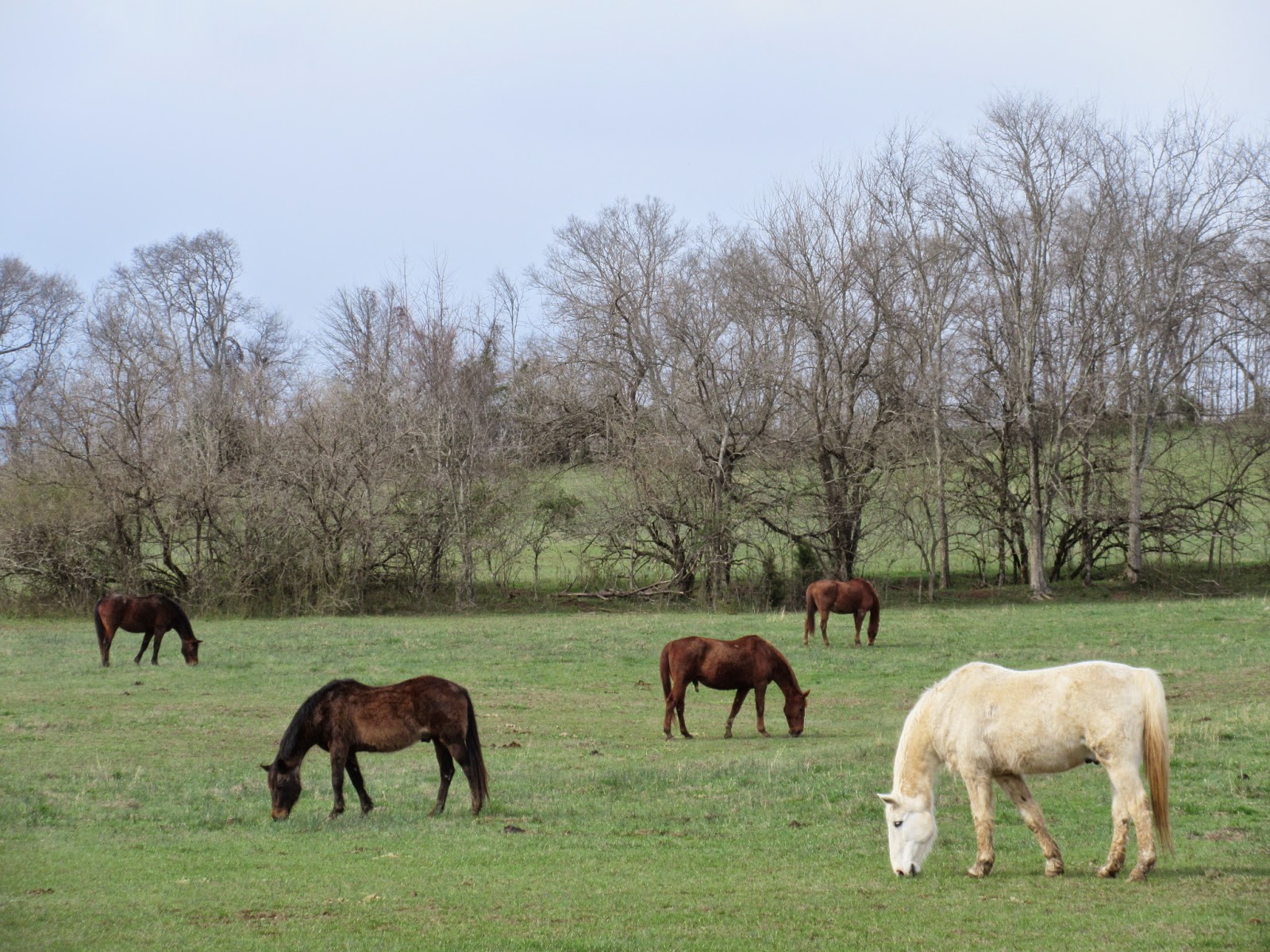 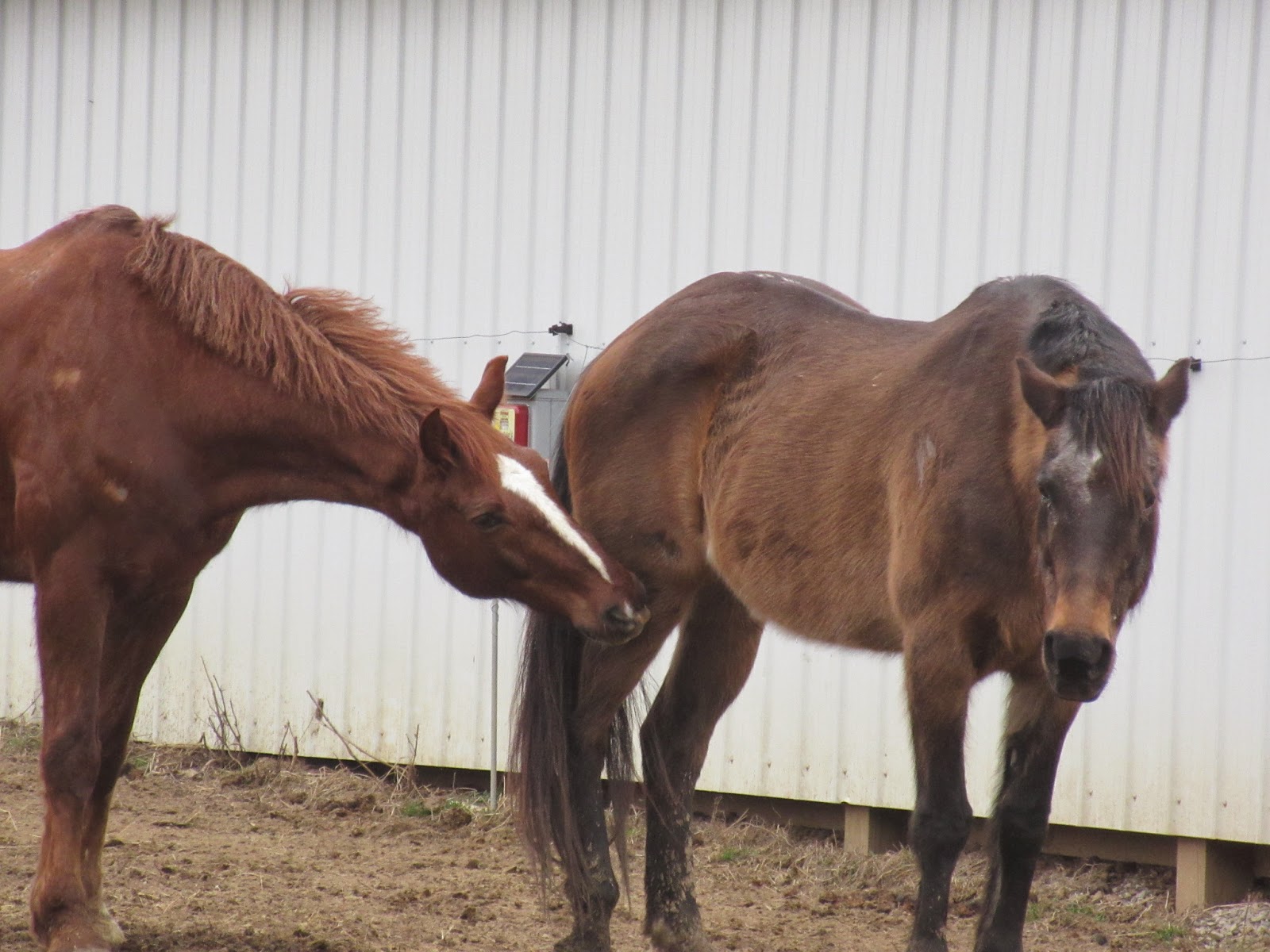 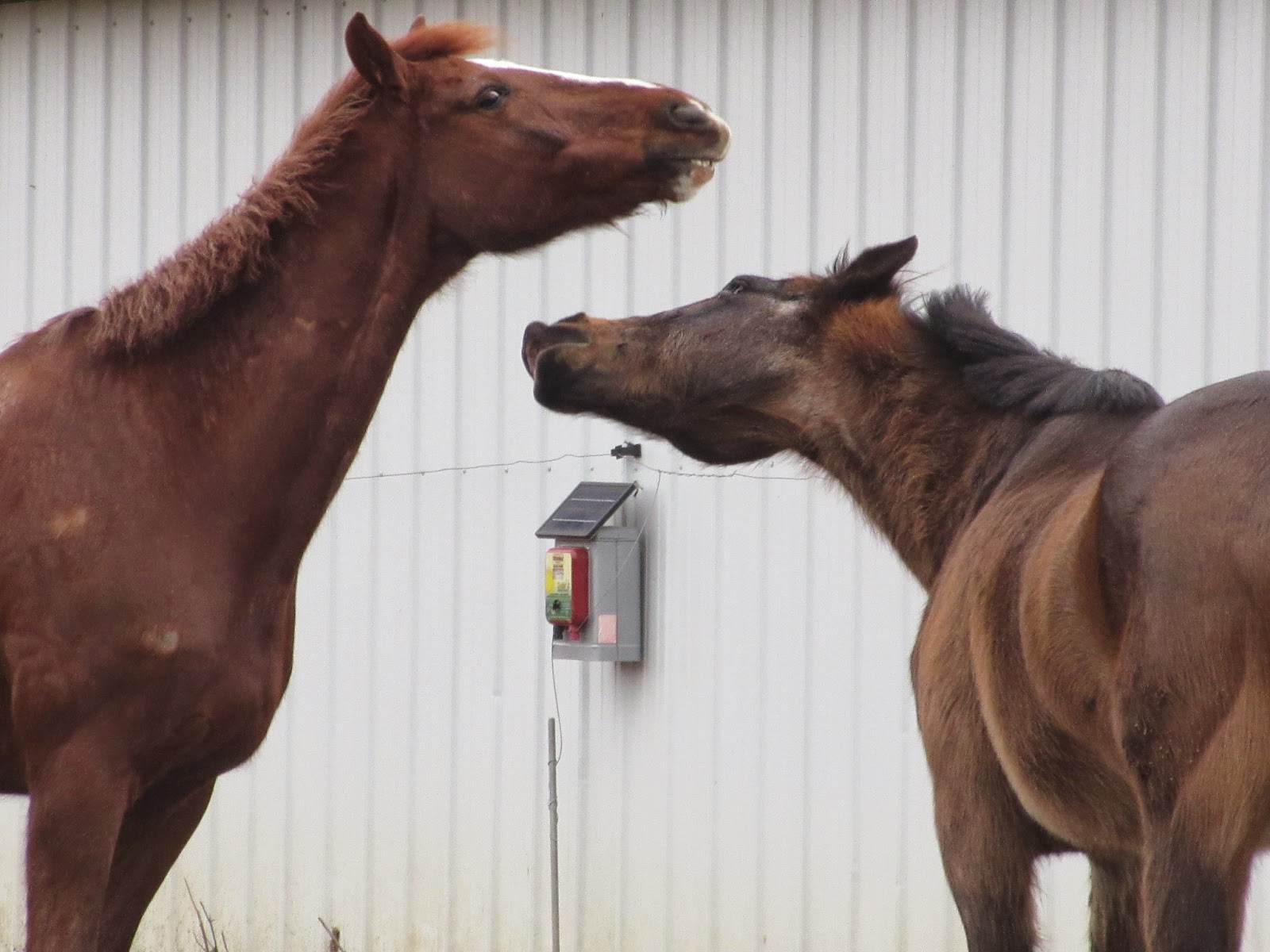 I think it must have something to do with surviving a lot of Canadian winters, but Jason is obsessed with things that bloom in the spring. About once a week these days we make a quick trip to the botanical garden near us so he can see what else is blooming and take pictures of all of it. 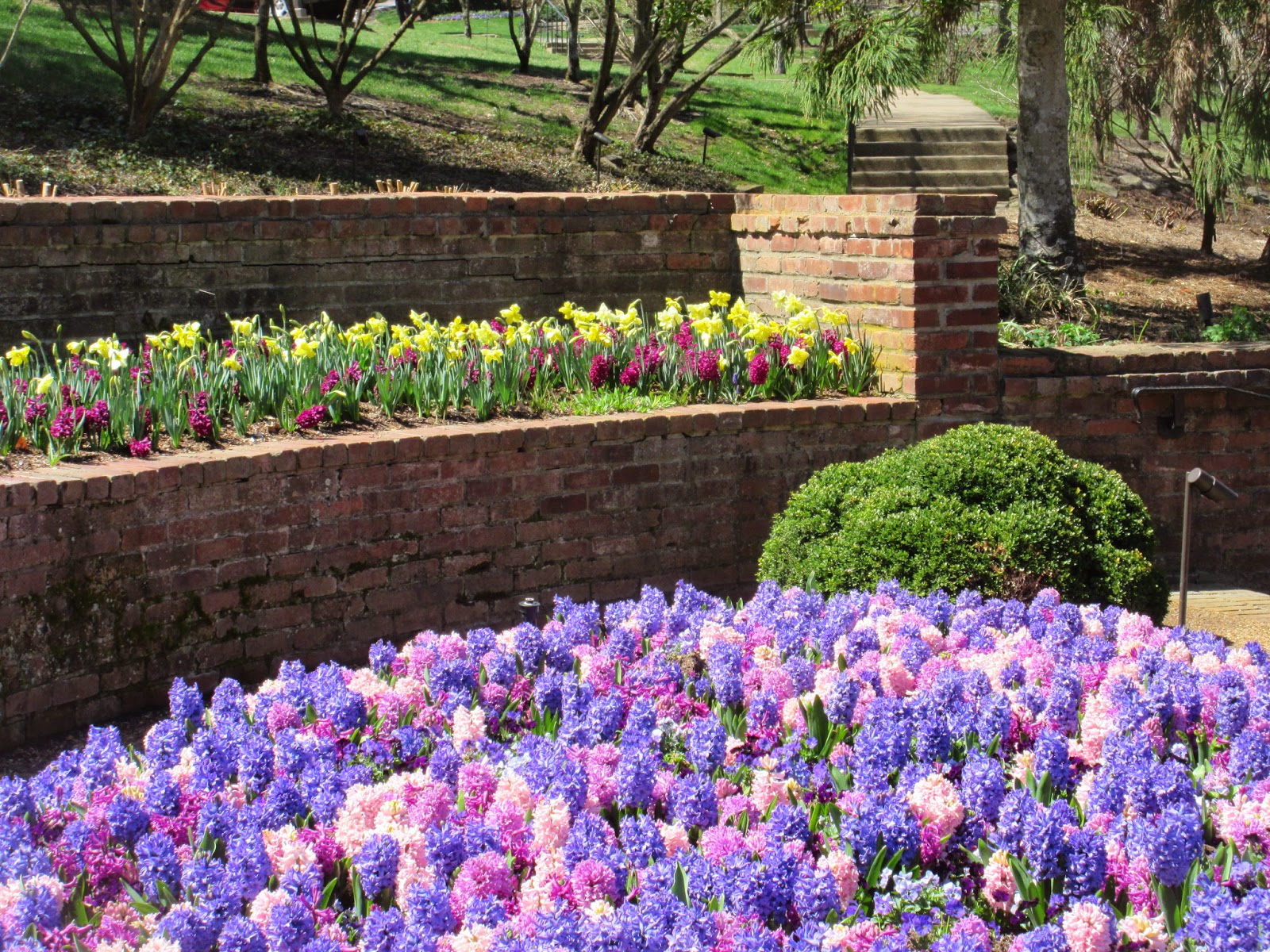 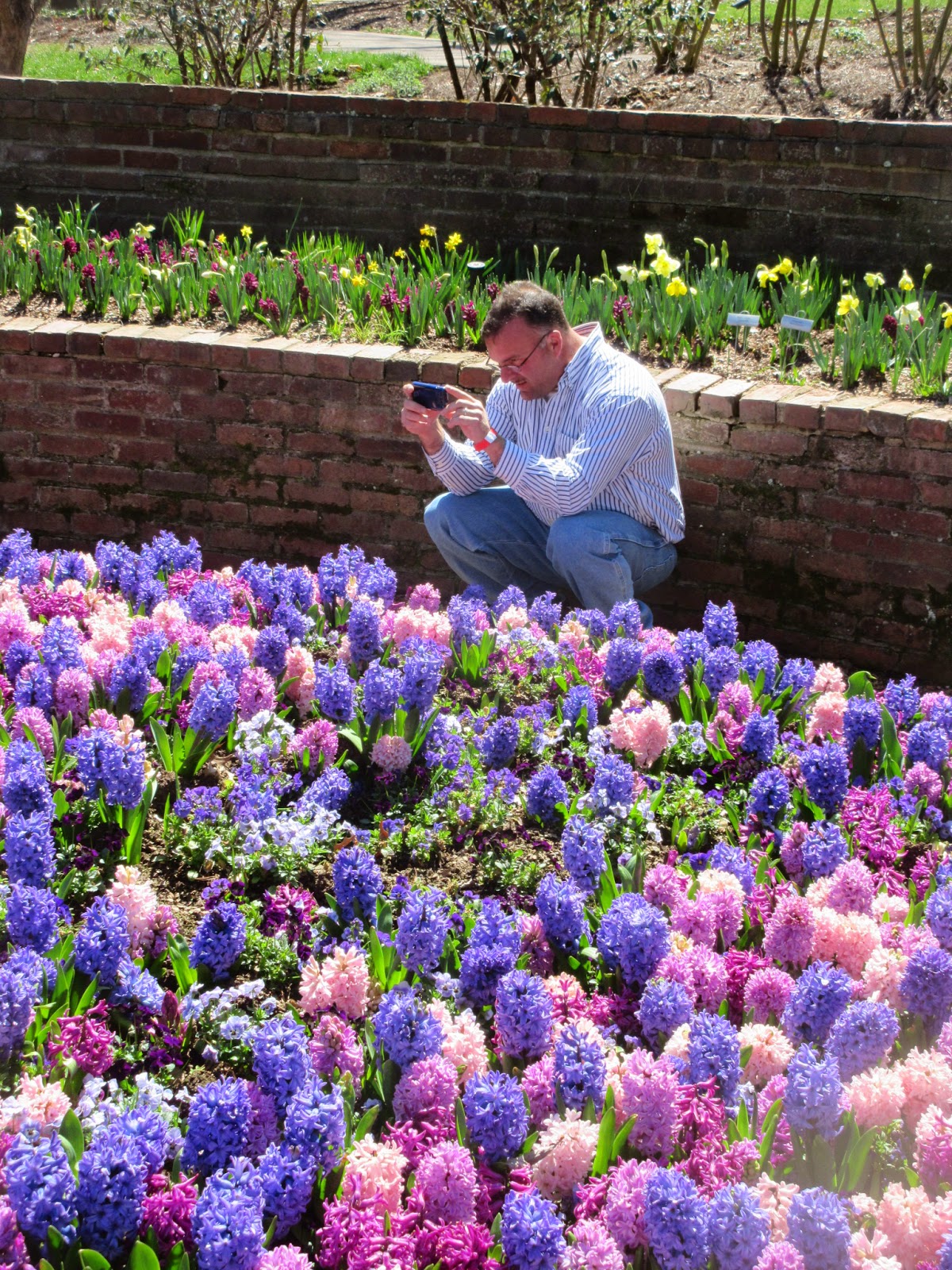 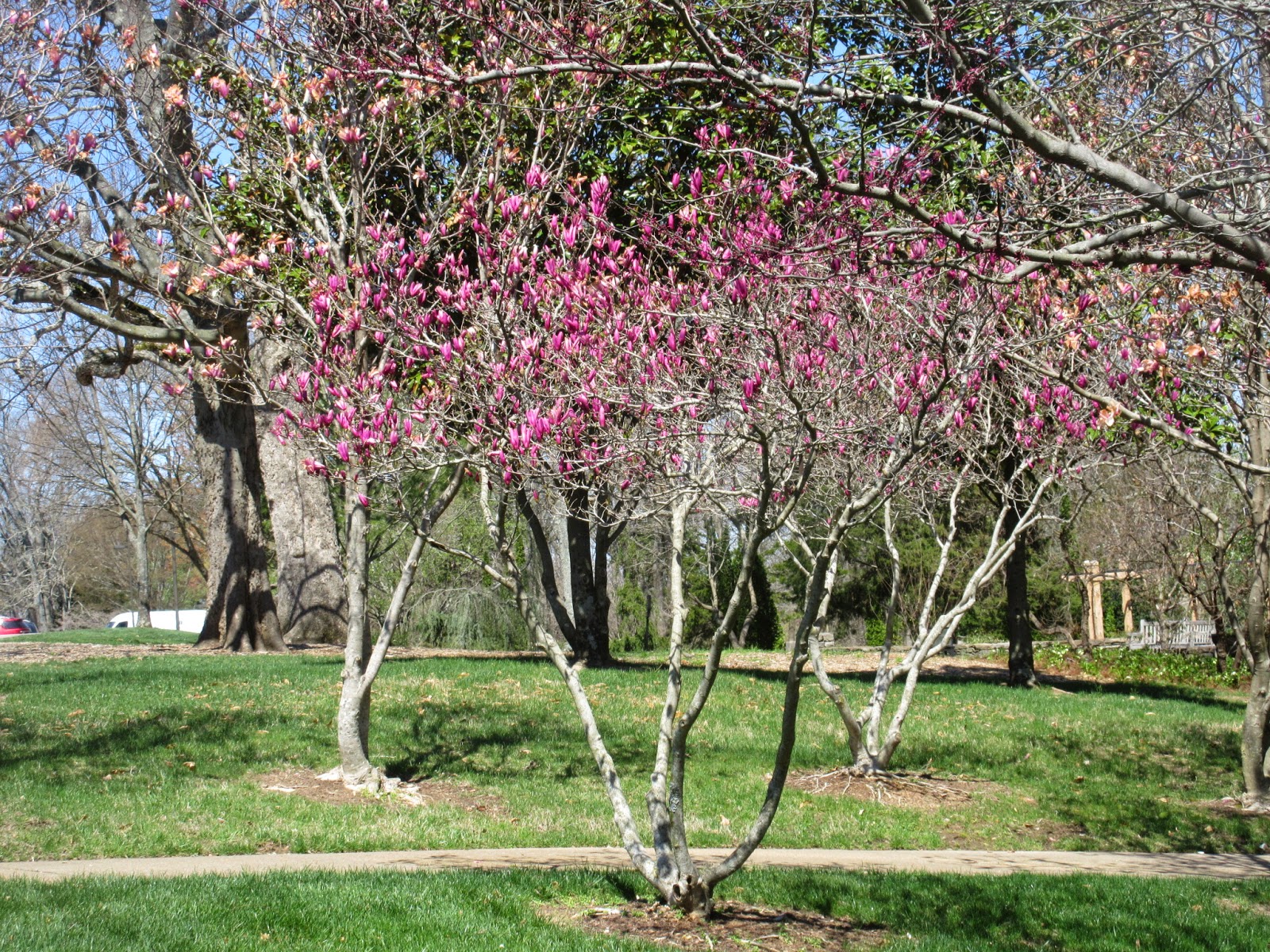 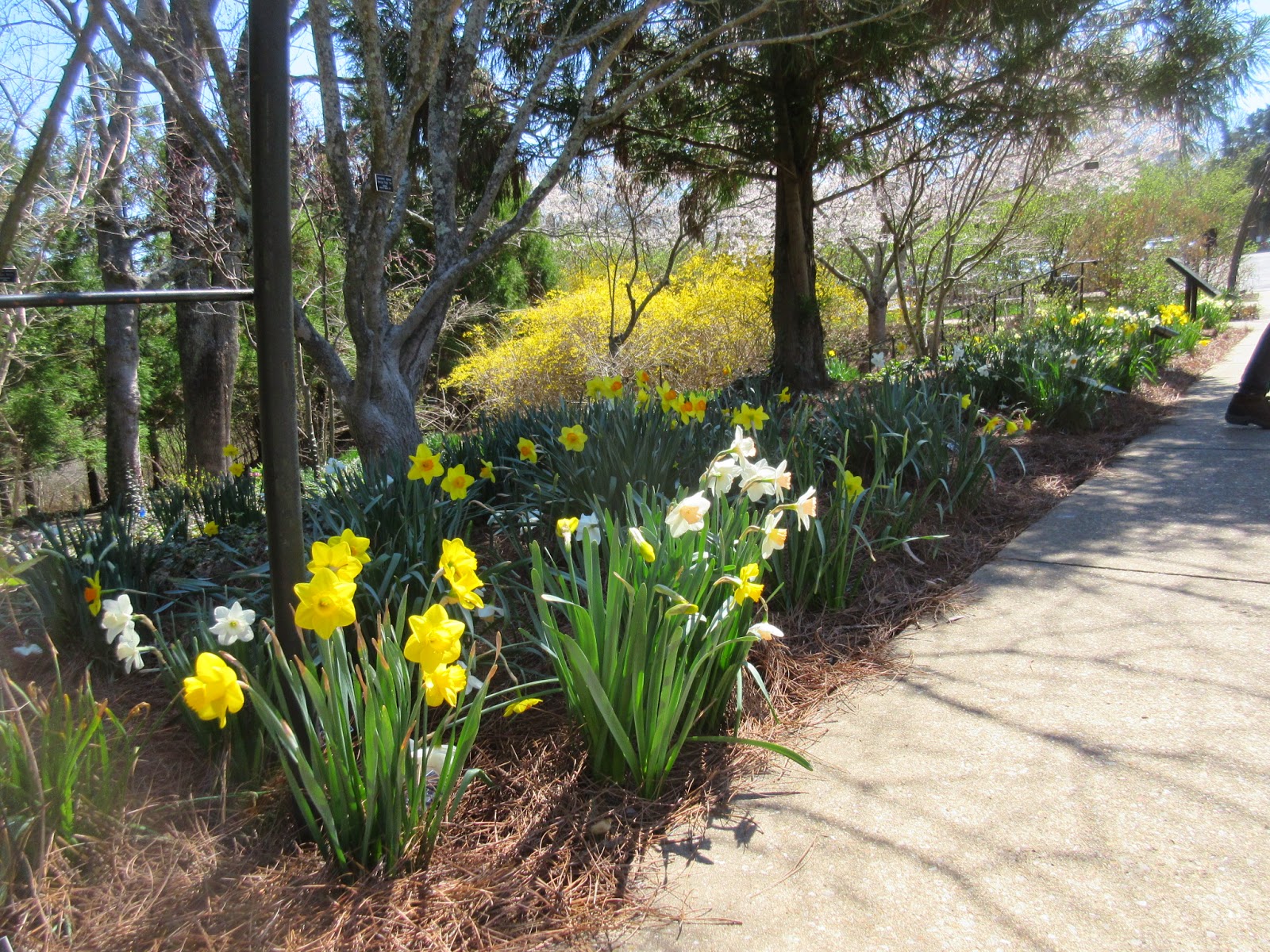 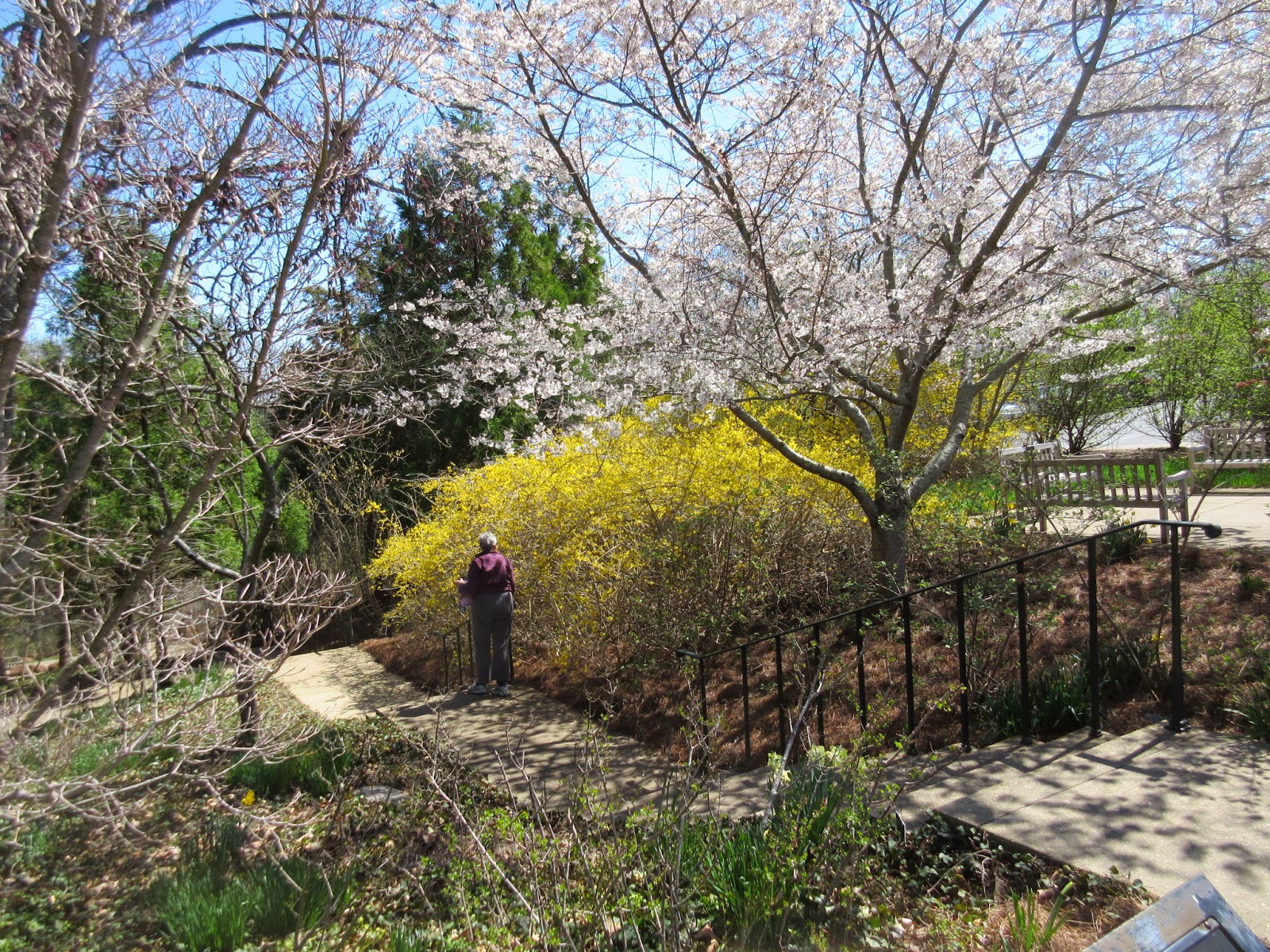 Being married to a Geologist, I must say I am horrified at the thought you wouldn't make "the rock" a landmark on your property ;)

Seriously though...FOUR years ago?? I can't believe it...I must be getting old!!

Plants that bloom in what would be exceptionally early spring for Ontarians certainly warrant proper admiration and photo ops. Sacha travels to Vancouver frequently and last week was obsessively texting pics of flowers and trees in bloom. I still had a couple feet of snow on the ground, it was below zero, and experiencing the lovely "wintery mix" that Ontario folk know all too well.

Beautiful Hyacinths at the botanical garden! Our crocuses are still reluctant.