Welcome To This Farm

There are several canine residents on the horse retirement farm. Over the years between my parents and I we have taken in a large number of wayward animals. I've already mentioned the stray goats, we have the stray flock of chickens, the cat that I cat-napped, as well as our assortment of dogs. Today I would like to introduce you to Bush the coon hound.

Jason and I have determined that Bush speaks slowly with a strong southern drawl. Anytime a new visitor comes he is happy to greet you with a smiling face and a wagging tail. Jason always says that Bush is saying "Welcome, welcome to this farm" in his slow, southern drawl as he stands there wagging his tail.

Bush always has a happy and friendly expression 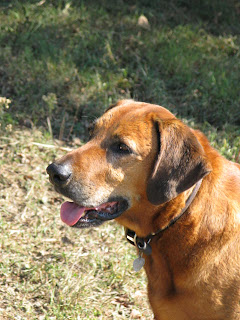 I think he is trying to look regal or noble here; it really isn't him 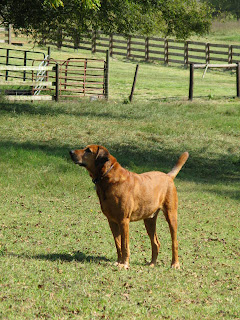 Happy with a wagging tail is typically his look 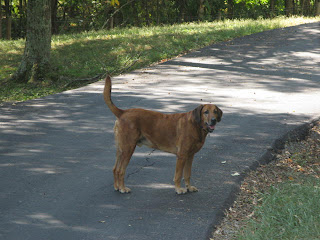 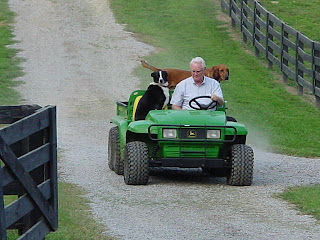 Jason with a few passengers; Bear is looking over one shoulder and Bush over his other shoulder; as always Bugle has claimed the passenger seat 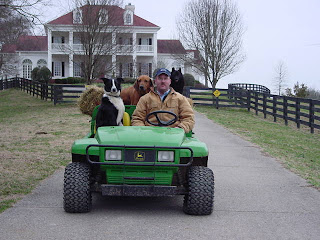 The other great joy in the world of Bush the coon hound is riding in my Dad's truck. Dad's truck is strictly a farm vehicle and is used to haul stuff around, pull trailers, buy stuff at the co-op, etc. Thus, Bush does not get a daily truck ride which is unfortunate for him. Bush loves to ride in the truck so much he actually recognizes the different set of keys that my dad uses when he drives the truck. When he sees those keys in my dad's hands he bolts over to the truck and waits for the door to open. If the truck is moving Bush expects to be a passenger!
Bush with Jason and my niece Caroline; Dad's truck in the background 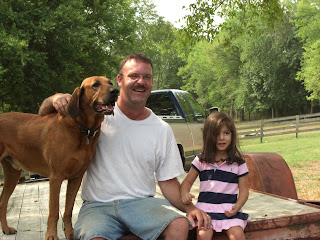 One of the funniest memories I have of Bush involves my dad's truck. For some reason Jason and I had switched trucks for the day with my dad. I can't remember why but for some reason we were driving his truck. We were only a couple of miles from the farm when the serpentine belt broke. We managed to make it back to the farm and I called a tow truck. The tow truck came, loaded the truck onto the back, and started to drive down the driveway. Bush is not the brightest bulb in the box but he knows that if the truck is moving he gets to ride. Bush took off running after the tow truck, trying to get into "his" truck. He simply could not comprehend that the truck was moving and he wasn't in it, and he was determined to rectify the situation! Unfortunately I don't have a picture of that but I wish I did.
Bush in the back seat of my mom's car; he had followed Jason & I down to the road while we were repairing a fence board so we called my mom to come pick him up. I didn't think I would ever see Bush in the Mercedes so I had to take a picture to commemorate the occasion. 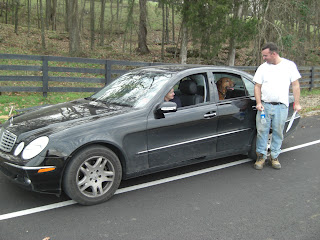 Although Bush doesn't know this he is quite lucky to be a resident of this farm. His life could have been very different. My dad was driving on I-65 several years ago and stopped to fill his car up with gas. He saw an extremely skinny dog at the gas station and inquired about the dog. They told him she had just showed up a couple of days ago. Dad put the dog in his car and brought her home with him.
He named her Dolly, and Dolly was the thinnest dog I have ever seen. Her backbone was raised up and prominent, her ribs stuck out, and she was basically a walking skeleton. She gained weight quickly as my parents stuffed food into her. My dad was quite proud at how quickly she was packing on the pounds. As it turned out she was pregnant and she had thirteen puppies. We were able to find homes for most of the puppies but Bush stayed at the farm.
He has no idea how different his life could be today as he yawns lazily 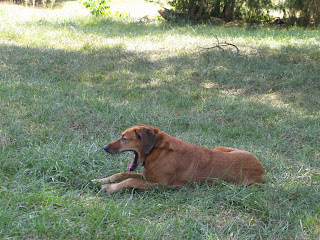 Followed by a nice streeeetch 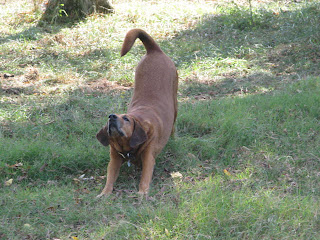 Napping in my house with Bear 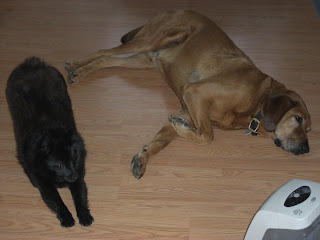 Hanging out by the fence with Jason 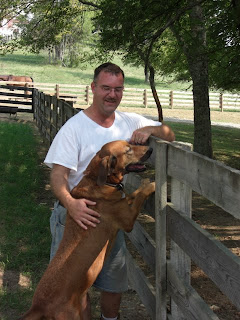 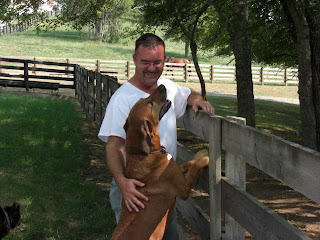 I hope you have enjoyed meeting Bush. If you ever happen to visit the farm he will greet you with a smile and a friendly wag of his tail while saying "Welcome, welcome to this farm."
Posted by Melissa-ParadigmFarms at 7:26 PM

Your animals need their own calendar. All of them are so great. How lucky they are to have such a wonderful caretaker and you to have such wonderful little animals to make you smile.

Someone e-mailed me and made the calendar comment. We have so many I guess we would have to have a contest to narrow it down to 12!

Bush has actually been in a calendar. Happy Tales, the local no-kill shelter, did a calendar one year. You sent in pictures of your pet and people could vote on the top 12. My mom sent in a picture of Bush. One vote cost $1 and you earmarked who your votes were for. Bush made the top 12 and was Mr. August that year.

Whuuuu whooo, Mr. August. lol. I would so be calling him that all the time. lol That is awesome.