The Romantic Side of Farming

We have certainly had our challenges around the farm lately. I find that people often tend to romanticize both the ideas of running a farm, especially a retirement farm, and keeping horses at home. Obviously since I run a farm (a retirement farm at that!) and keep horses at home I have found that I enjoy it.

I remember reading a thread on the Chronicle Forums one time about someone wondering if they should buy a farm out in the country, pull the kids out of private school, leave the trappings of city life behind and embrace farm life. This person said she dreamed of the kids seeing the miracle of life by seeing kittens born in the barn, looking out the windows watching their ponies loaf in the green pastures, and bareback rides across open meadows in the summer. It would be a simpler life, slower paced, without the hustle and bustle of corporate America and 'keeping up with the Jones.'

I thought about that a few times over the last few days. Such as when Jason and I had to drive the truck back to the equipment shed and jump the tractor off of one of the truck batteries to get the tractor started. The cold weather we have had has been more than our tractor battery could deal with, and thus it has needed help to start.

I thought about it again this morning when I realized one of the water hydrants was frozen (thankfully the first time I have ever had to deal with this). I know how it happened, the hose came out of the trough at my late night trough check and got water on me, all over the hydrant, and everything else within a few feet. Then the water froze all over the hydrant and inside the handle. I realized this morning just how thankful I should be to have water lines run out to every pasture. Sometimes you don't realize how nice something is until you don't have it anymore!

Jason came to my rescue with a blow torch to unthaw the hydrant. Unfortunately he was just getting started with the unthawing process when the torch decided to start shooting out flames everywhere! This resulted in a few seconds of entertaining drama as Jason attempted to cut the flame off without setting himself on fire! Needless to say my hydrant is still frozen and I am hauling water to this one trough in the Aquatainers I keep handy for just such emergencies. I just throw them in the back of the Kubota, fill them up, and drive down the alley to pour the water in. Definitely an inconvenience but a very manageable one. I am also relieved that our record breaking cold is coming to an end and my hydrant should unthaw on its own in the near future. Fingers crossed that we don't have a cracked hydrant at the end of this process!

Those are just two of many more examples I could give of recent romantic farm happenings. Of course there is the romantic side to running this farm. I spend my days surrounded by and interacting with beautiful horses. There are plenty of the blissed out moments that everyone associates with farm life. But there are also tractors that don't want to start when you really need them to start, hydrants that don't work, broken fence boards to replace . . . and of course these things tend to happen at terribly inconvenient times, usually when you have an important appointment that you really do not want to reschedule!

Jason attempting to unthaw the hydrant. This was taken before the shooting flames, unfortunately I did not have the presence of mind to take pictures of that! 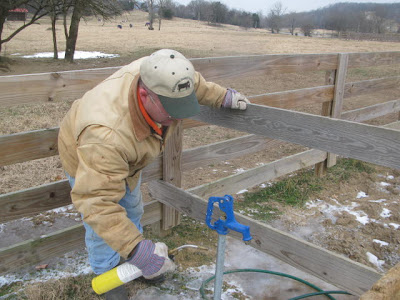 Thank you Jason! The last part of my Christmas present arrived today, three custom leather halters from Quillin's in Kentucky. One each for Sky, Bonnie and Lexi. I love Quillin's halters and these pictures do not do them justice at all. 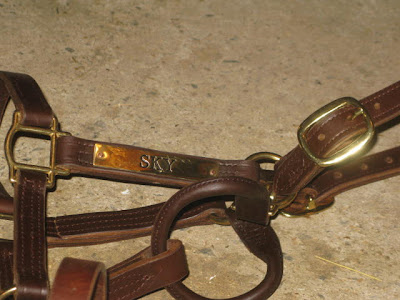 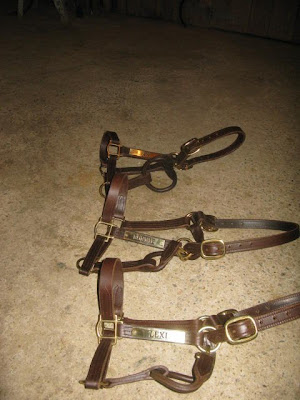 Faune having a grooming session; a step ladder is required for the Big French Guy! 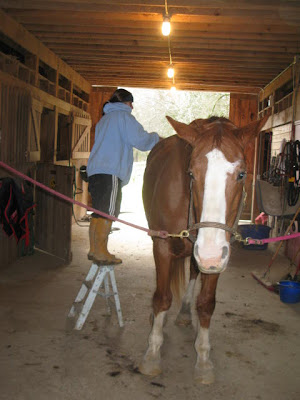 Lightening having a snack; by the way the rest of these pictures were taken in December 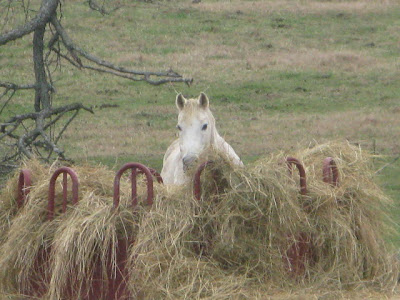 Harmony napping while MyLight stood nearby 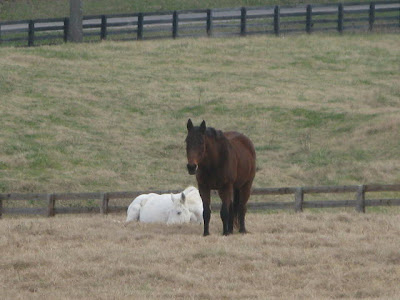 Chance having a grooming session 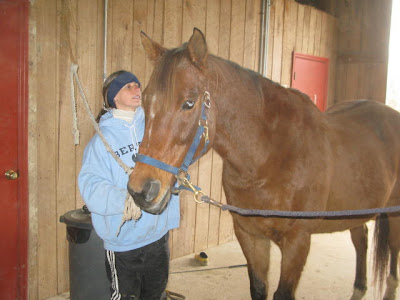 Faune, Sebastian and Asterik making their way through the pasture on a rainy day 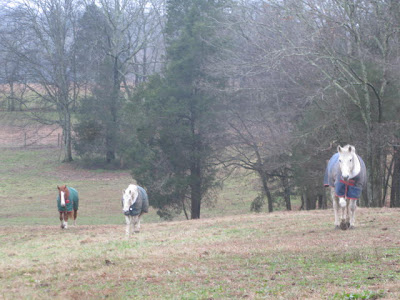 Leo and Trigger were being rowdy 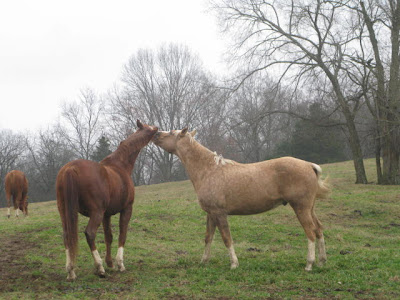 There was a lot of mouthing back and forth . . . 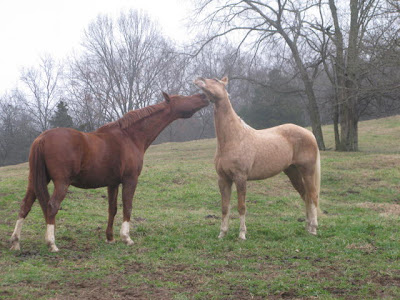 . . . and rearing! Then they took off running but it was too overcast and my camera was only taking blurry pictures from a distance. 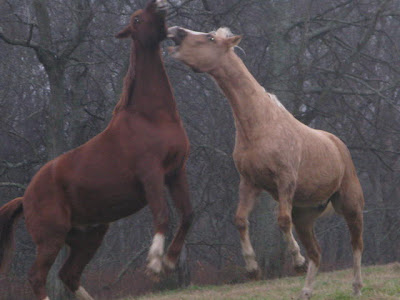 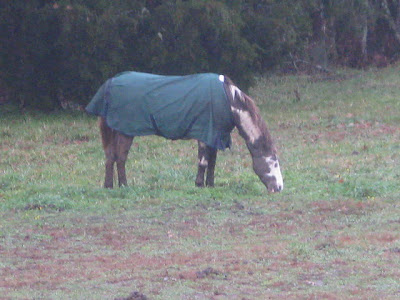 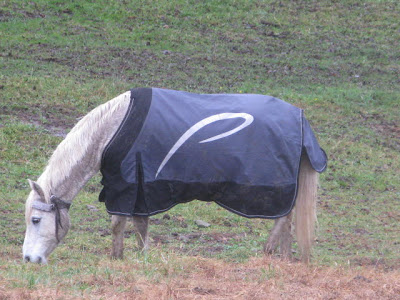 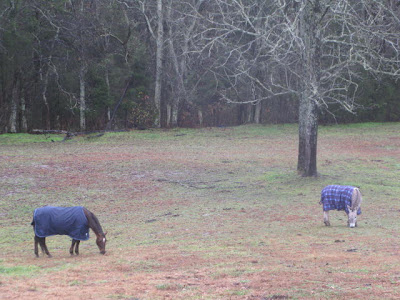 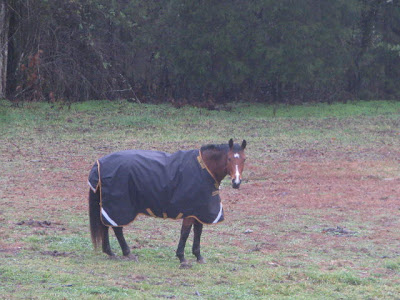 Posted by Melissa-ParadigmFarms at 9:36 PM

Email ThisBlogThis!Share to TwitterShare to FacebookShare to Pinterest
Labels: farm maintenance, farm management, What is it really like?

I know what you mean - anyone who thinks it's romantic or easy - just send them my way for a dose of reality. It does have its advantages though - taking care of horses is very satisfying.

Ah yes . . the 'ol flaming blowtorch . . . hate it when that happens. My guess on your hydrant, as it looks to be one with plunger under frostline, the only thing really frozen is the handle and there's no water in the line in danger of freezing . . . and if I just jinxed you and you wake up to a pond; may a thousand pound animal flatulate in my general direction . . . oh wait . . that's daily!

I believe you're correct John.

Agree with Kate anyone thinks it is romantic and easy needs a does need a dose of reality. But there are those moments when watching the sunset behind the hills, seeing the horses grazing peacefully in the fields, and watching the babies grow big and strong. For me it was when the meanest stallion on the farm nickered for me when I walked into the barn, then nicely took his carrot rather than kick the stall wall. I miss it more often than not when stuck behind a desk in a stuffy office.

Ha, I wish I could convince a particular family member of this! Somehow *I* got stuck with all the practical thinking and she got all the fairytale dreamhorse thinking. Fortunately there are no horses involved...yet. That type of person doesn't listen to reason though, in my experience. They know it all already.

I will say I definitely consider those halters to be a very romantic gift! Very nice!