Run-in shed number two is currently under construction, hopefully to be completed either tomorrow or early next week. Moving day number two should be happening in the next few weeks. I hope it goes as smoothly as moving day number one! After the run-in is completed we will build some cross fencing and move another group of horses. I was thinking today about how much building we have left to do and it gets kind of depressing, especially since I know how much we've already spent. It is a lot more fun to think about what we've done so far.

When we bought the property earlier in the year it was a blank slate. There was absolutely nothing there except grass and trees. No perimeter fence, no old barn, not even a driveway. So far we have built:

Jason has done a lot of this work himself. He installed all of the water lines by himself with no help. Our contractor built the shell of the barn but Jason has built out the interior of the barn himself with some invaluable help from my Dad on a few of the projects. 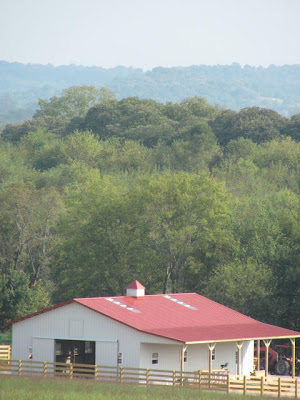 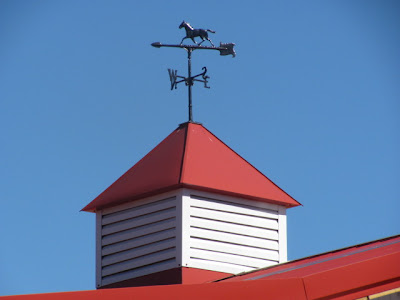 Front of the barn; I want to put shutters around all of the windows. Jason did not give me a pleasant look when I mentioned this, and started grumbling something along the lines of we have plenty of things to do without worrying about shutters on a barn and never-ending projects. 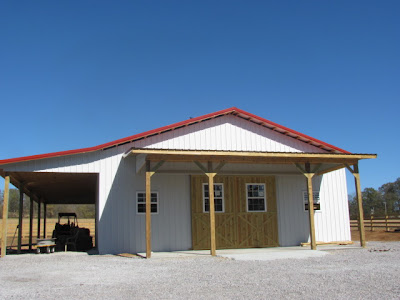 Front doors of the barn, still in need of painting (as mentioned above the projects NEVER end!) 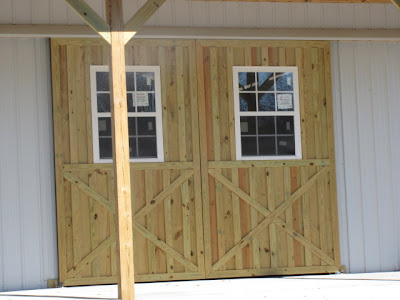 Door to the feed room/office inside the barn; it is fully insulated and has heat/air 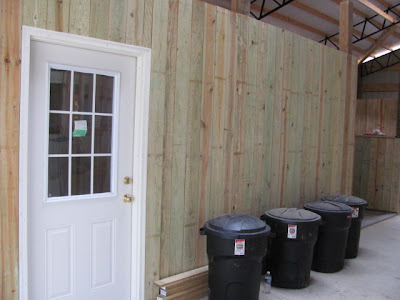 a couple of the stalls; we are waiting for the grills to come in to put over the windows (did I mention the projects never end??) 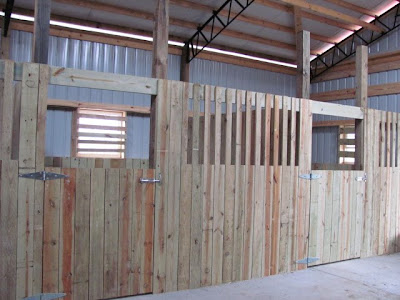 Wash rack on the left and cross tie area on the right; excuse all of our construction paraphernalia - it has to go somewhere handy while we need it 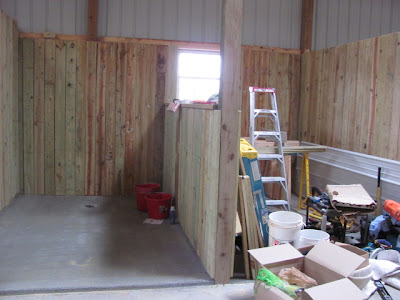 On to some horse pictures; Justin and Boo 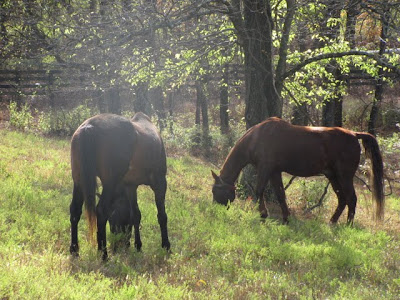 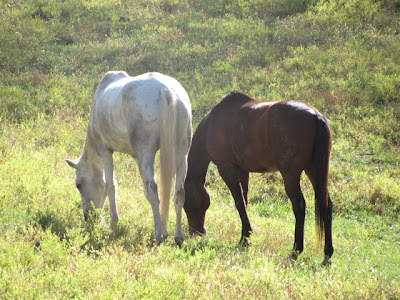 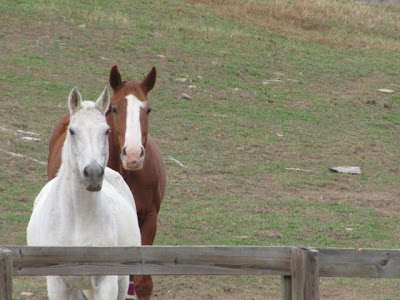 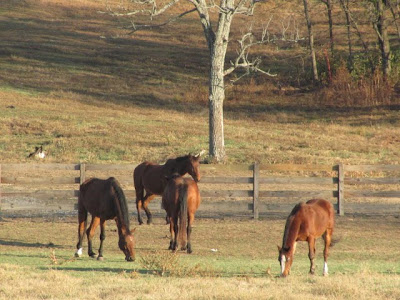 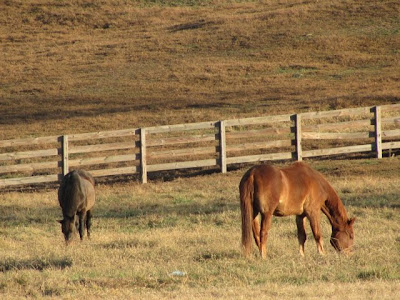 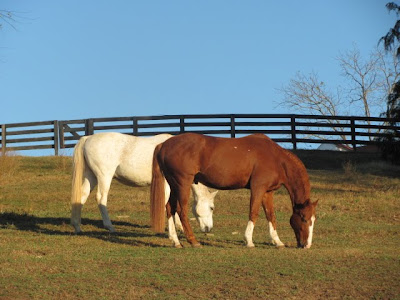 O'Reilly and Noble (Lucky and Slinky behind them) 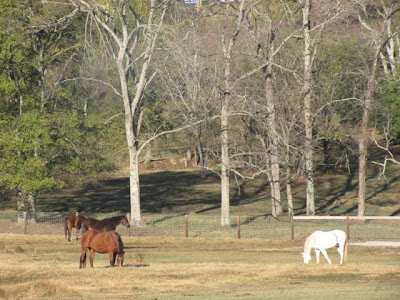 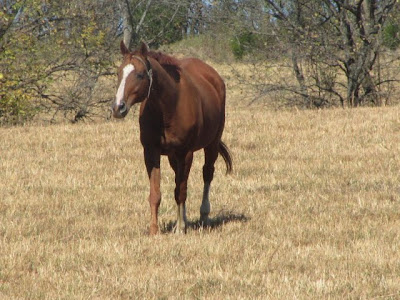 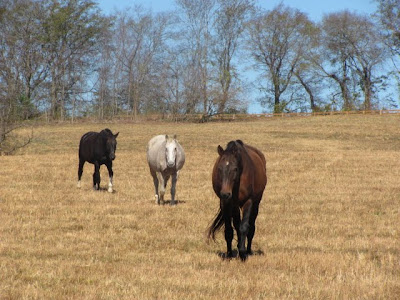 Thomas was resting his head on Grand while they hung out 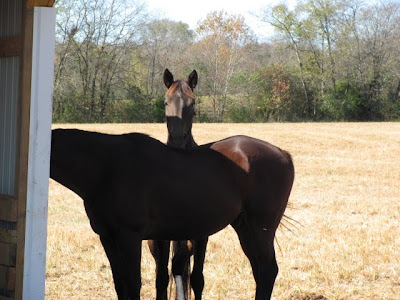 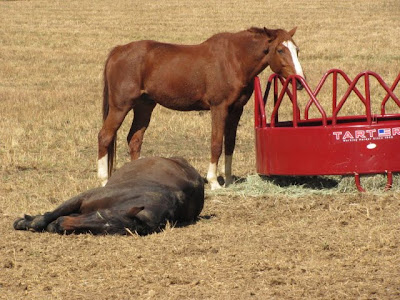 new faces that I have not had time to introduce lately (bad me); Toledo and Rocky 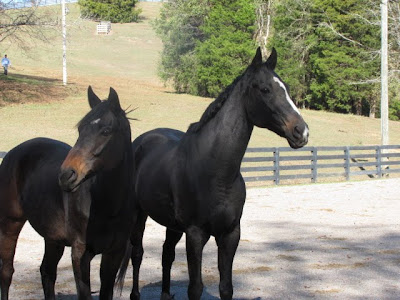 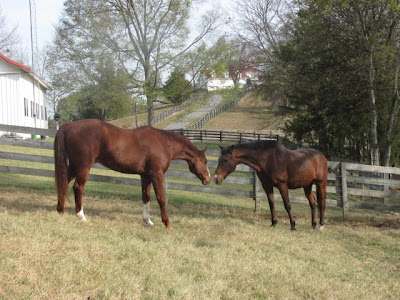 Posted by Melissa-ParadigmFarms at 7:36 PM

I have a screwdriver, some metal screws and 22 shutters with your name on them ! Also a paint brush if you are willing ! :) That is an evil grin ! :) That's another one !

Man Melissa ....you've got your nerve! LOL! You are SO spoiled with such a handy dandy. I'm with Jason, I would be happy enough to have what you've got! The wash rack alone! I'm just kidding you....we women can always see more that "could be" shutters would be a special touch....just our gift Jason. Jason, you've done such a wonderful job!

I just spent the day outside in 28 degree weather and I'm chilled to the bone! The horses have all turned into frisky monsters with the cold air too! You both have to be so proud of the work you do there! Awesome! Hope your second move goes well for you!

Everything you two have done is top shelf. It is a HUGE project, but you sure know how to do it right.

Having just returned from a visit to the new farm and Apollo, we can say that we are very impressed with the property and all the work you have accomplished! The horses all look happy and healthy. We had a fabulous time and enjoyed spending much of it with Jason who is quite more than handy and very amusing and interesting! Pete especially enjoyed romping in the woods. The place looks great and we anxiously await pictoral updates on the blog. Thank you so much for your hospitality and your great caretaking of my gentle giant!