1. Redbox is a vending machine for movie rentals ! Of course I'd heard of Redbox, but I had no idea until this year what it actually was or where I might find such a thing. (I'm aware this has absolutely nothing to do with horses !)
2. If you pull up old fence wire with your city born wife who (thankfully) had no idea what this entailed ahead of time, you're guaranteed ten curse words a minute between you, no matter how unlikely that may seem while reading this at home. Don't believe me ? Give it a try and report back to me.
3. It doesn't matter how much money your southern born wife spends in pursuit of winter time comfort, if it rains and snows hard enough for long enough she's going to be wet, cold and miserable anyway! (Please don't tell her I said this).
4. It's not very manly to dress up your fainting goat for Hallowe'en.
5. We buy gravel the in exactly the way some people buy tobacco products or alcohol. I wonder if there's a group called "Gravalholics Anonymous".
6. Frogs, bleach, wives and water troughs don't mix well at all.
7. If you are going to play pasture strip tease with your southern wife, for your sake wait until it's a lot warmer than 43 degrees outside ! :)
8. Some rocks aren't going to move no matter how much effort you put into it.
Melissa here. I saw this post and asked Jason if he forgot to finish writing it. He said no. I said "but your list only has 1-8, aren't these usually top 10 type lists?" He just shrugged his shoulders and walked away so . . . I guess this means he hasn't learned anything else??? I was hoping that number 9 would be something like "I've learned my wife usually hands out excellent advice and now I listen to her." 2011 is not over yet so Jason still has time to learn one more thing.
______________________________________
Lighty, Alex and Darby 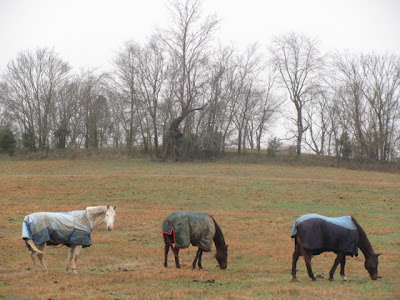 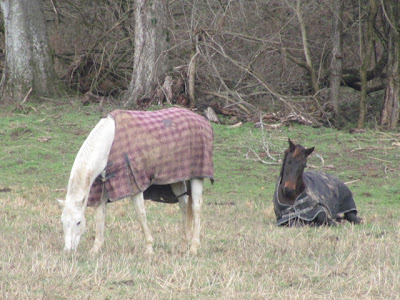 Rampal and Tiny with Rocky grazing in the background 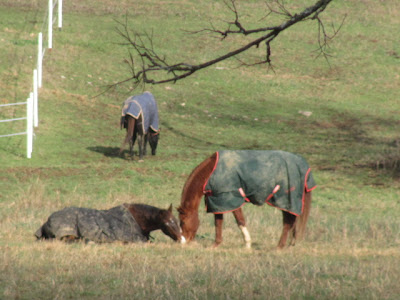 Kennedy, Stormy and Toledo flat out on the ground 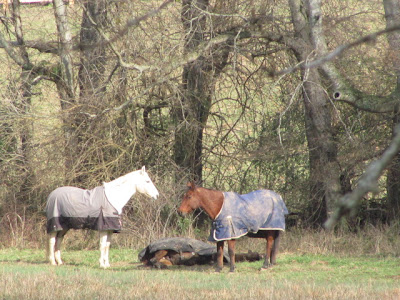 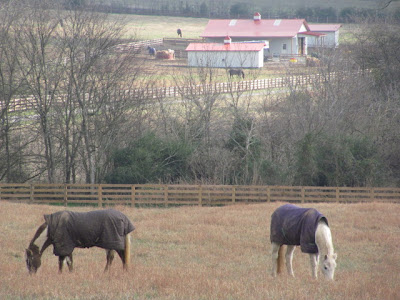 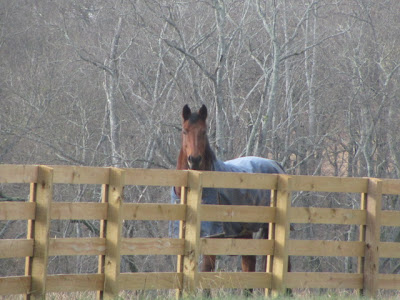 Fonzi, Romeo, Gus and Silver were staring at something intently 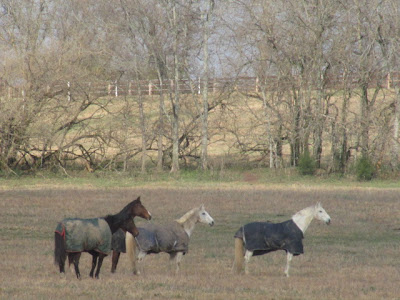 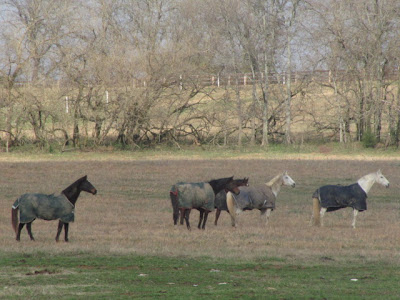 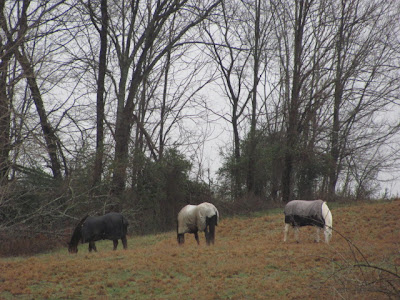 Posted by Melissa-ParadigmFarms at 9:54 PM

Loved the "year in review." Each reference brought a smile to my face without even having to go back to read the post again.

I'm going to break the rules here and continue a topic on this post that was started on a different post.

A few days ago, I was singing the praises of my Mudruckers. Today I noticed that they've developed cracks. Probably right where you guys are getting cracks in the Muck Boots.

As it happens, I had purchased them on-line from Dover, and, as it happens, Dover just opened a retail store in my town. (You knew Libertyville, IL was the horse capital of the mid-west, right?)

I stopped in there tonight and it sounds like they are going to replace them. (I've had them 18 months.) They didn't have my size in stock and are ordering them. Interestingly, as I was choosing a cookie to take with me, the next woman in line to talk to the manager wanted to tell her that both pairs of her Mudruckers had cracked on the top at the ball of the foot. I hope the manager doesn't foresee an avalanche of Mudruckers that need to be replaced and decide to charge me something... we'll see.

I can totally relate to #9, but in MY personal experience, it's an uncommon occurrence (but a true one!) I guess it's cold enough up there for blankies. That means the Florida folks will soon be putting on their quilted stable blankets with the sheets over them and turning their horses out so when it gets to be 75+ degrees by noon, they are all wilting in the fields!

If it makes you feel any better, I just discovered Red Box this past April.

And as far as Gravelholics Anonymous, sign us up. Last week Tim called our friend the Excavator Guy and said "Hey, I haven't talked to you for awhile. I have all this extra cash in my pocket, and I feel like I should just send it to you."

Then I talked him into a free culvert pipe since he likes me a lot :D.

Who, Tim or the gravel guy ? Just in time for Christmas this story could get really interesting ! ;)

The free culvert pipe came from the Excavator Guy. Actually, I let him have some rocks in trade. So far, rocks are my only cash crop.