Gibson is a bay Hanoverian gelding who was imported from Germany several years ago. His registered name is Grimaldi and he was sired by Grannus. Gibson had already made his mark on the jumper ring when he was imported from Germany. When he initially was imported he continued his career as a jumper, showing in everything from Children's Jumpers and Adult Amateur Jumpers all the way through the Grand Prix ring. That alone makes him quite a horse. 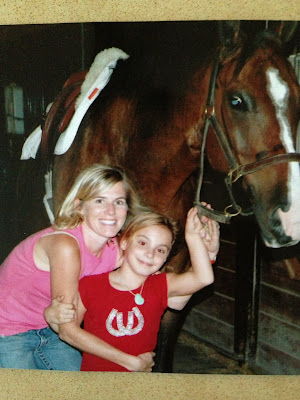 Gibson eventually made his way from the jumper ring to the hunter ring, and he was showing on the A circuit as a hunter when he joined his forever family. Eight years ago his family was looking for a very special horse that could handle doing double duty with two very different riders. This special horse was going to serve as the first horse for the 9 year old daughter in the family.  This horse was also going to be ridden and shown by the mom who had taken an 18 year break from riding but wanted to start riding again with her daughter. 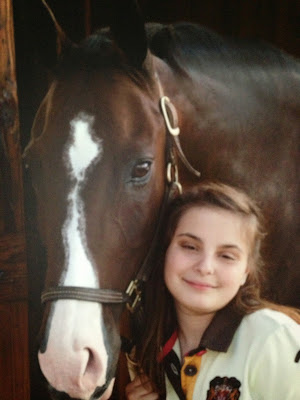 As part of their horse search a local trainer brought Gibson to his barn along with two other horses for the family to try. Their daughter fell in love with Gibson as soon as she saw him, and she rode Gibson first. Gibson was cantering around in an outdoor arena carrying his petite nine year old rider when he was given the perfect opportunity to show his spooky side. As he cantered around this arena that he had never been in before, a train came charging past the arena on the tracks that were about 20 yards away. As the train flew by the horns were blaring constantly. It was so loud and appeared so suddenly all of the people were startled. However Gibson didn't do a thing, and just kept cantering around. They knew at that moment that Gibson was, without question, the horse for them and they did not even try the other two horses. Three days later Gibson became a permanent family member.

Gibson and his young charge in the show ring 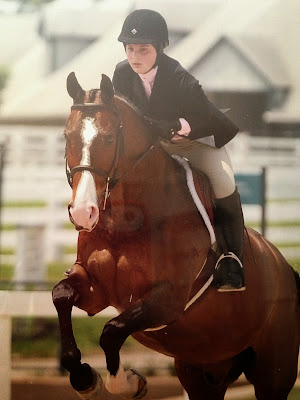 His mom said that riding and showing with Gibson was always a special treat. He always made the right decisions with his young rider, even when she was trying to ask for the wrong one. With mom he made her feel not only safe but also very competitive. When Gibson stepped into the show ring he immediately gave his full attention to his rider and the job at hand. His ears were always forward and he was always looking for the next jump.


Gibson and mom in the show ring 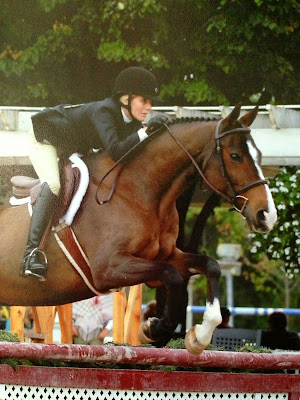 His mom told me that one of her favorite memories with Gibson came at one of their last shows of a very successful season. They had qualified to compete at the Washington International Horse Show in Washington, DC.  His mom was enjoying the beautiful weather at an outdoor cafe near the horse show. She watched as a horse trailer pulled up and a stunning bay horse was unloaded - Gibson. She said she never saw him look more beautiful and alert than at that moment as he walked off the trailer in the middle of downtown DC and took in the sights.


Gibson and his friend Lofty waiting for breakfast one morning 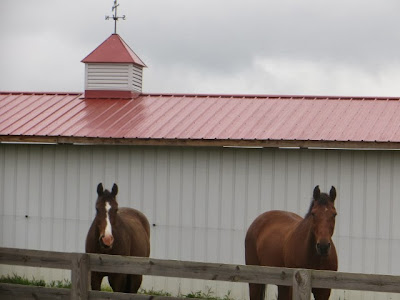 Gibson and a friend enjoying a perfect day of retirement 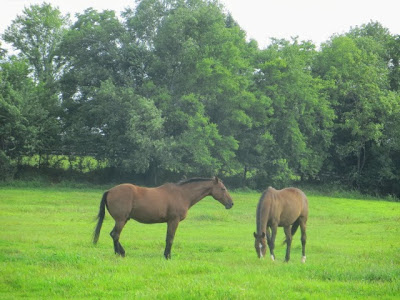 One day Gibson was enjoying some turnout time on a perfect spring day. He somehow hurt himself while he was out and injured his lower sesamoid ligament on one of his front legs, which was the same area where he had a previous injury as a younger horse. His family diligently treated his injury with shockwave therapy and lots of rest over a two year period. Although he had moments of soundness he was never able to stay completely comfortable on that leg while in work. His family decided it was time to stop asking Gibson to come back to work, he had earned his retirement. 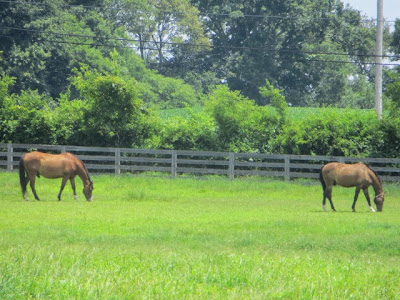 Lofty and Gibson going for a run 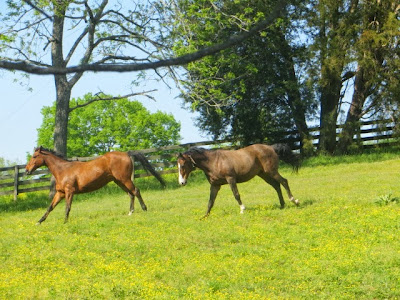 Gibson made the journey to Paradigm Farms from the Chicago area in April. We knew Gibson was going to enjoy life at our farm right away. One of the first horses he went out with was Donovan. Donovan wasn't sure if he wanted to be close friends with Gibson right away. Gibson on the other hand had decided that they were going to be BFFs immediately. Donovan kept trying to go to the other side of the paddock to graze and Gibson would canter circles around him until Donovan stopped moving and consented to graze next to him. After a few minutes of this Gibson had Donovan convinced that they could be instant best friends.


Gibson in the lead going for a run through the pasture 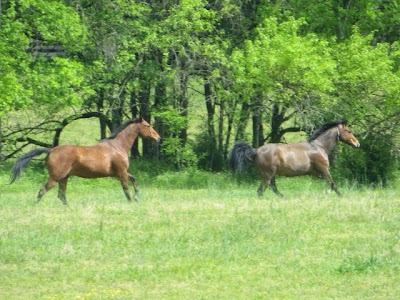 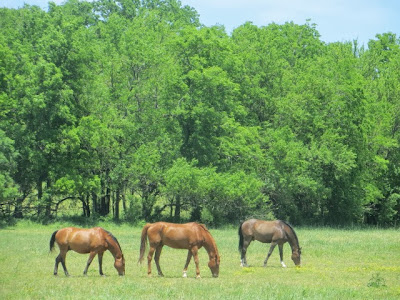 Gibson decided he was immediate best friends with any horse we put in a paddock with him. On the days when Gibson had a new friend in the paddock he never looked around for his former BFF, instead he just decided the new horse was now his BFF. When it came time for Gibson to join a group he just . . . joined the group. He basically went in the pasture and high-fived everyone and that was it. He had one of the easiest transitions into a group we have ever seen.  Other horses like Gibson as easily as he likes them. If he was a teenager he would be voted as Most Popular by his senior class. 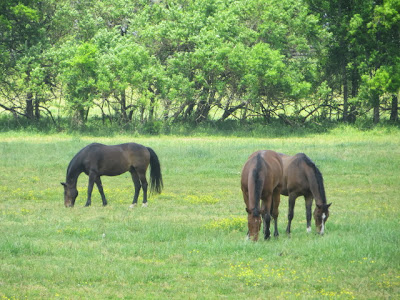 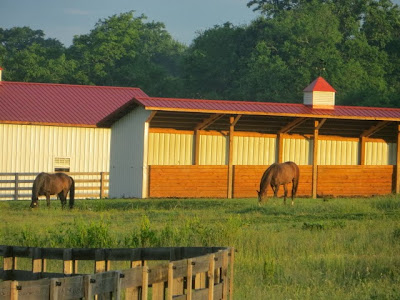 Gibson has been a wonderful addition to our family, and we hope you have enjoyed getting to know him!

Posted by Melissa-ParadigmFarms at 7:34 PM

I love the stories of people and their horses who care enough to say when the horse is done and needs to retire instead of selling them on as an unsound horse - kudos to them for giving Gibson the retirement he deserved!

What a lovely boy! The border of his blaze is so cute. Kindness and talent all wrapped in one...a special horse indeed :-) So nice to hear of a horse who has clearly led a fantastic, well-cared for life and is now living his days in horse heaven.

I agree with Kate, I love to hear the retirees stories.

This comment was from RiderWriter - I accidentally hit delete instead of publish. So sorry!!!

I, too, just LOVE these stories! Most of them make me cry, though, because I'm so happy the owners of "your" horses loved them enough to give them a perfect retirement at Paradigm. They are mighty fortunate equines.

I'll tell you what, though, looking at all the gorgeous horseflesh in your pastures must be a bit torturous... I know there's a reason they're all retired, but seeing them running around it often doesn't look like much is wrong (in photos, at least). I myself would be sorely tempted to swing a leg over! ;-)