The Horse is Where?

When I showed Jason this news article about a horse that managed to get on the barn roof he said, with absolute seriousness, "if I walked outside one morning and saw one of the horses on a roof I would crap my pants." I think that is probably a pretty good summary of what I would do as well, although I would like to think that in the midst of my shock and horror I would remember to take a picture.

I'm not going to name any names, but we have a few residents that would absolutely climb up on a roof if the opportunity presented itself. They would think it was the coolest thing ever. Some of the other horses would never be convinced in a million years to climb on a roof.  I just hope I never have the opportunity to walk outside one morning and go "what the . . . ???? Is that one of the horses on the barn roof??"  Yep, I think I would like to pass on that experience.
_____________________________

A New Brunswick couple was baffled after a family member sent them a photo of their horse perched on the roof of a garage.  Stephen Downey and his wife Pat raise racing horses in Hampton N.B. But despite their experience with the four-legged beasts, they say they were baffled after seeing a photo, taken by Stephen's brother Archie, of a young colt on the garage roof.

"It looked like Archie had done a joke on Stephen and Photoshopped the horse on the roof because that just doesn't happen" Pat Downey told CTV Atlantic. "You would never get a horse to do something like that." 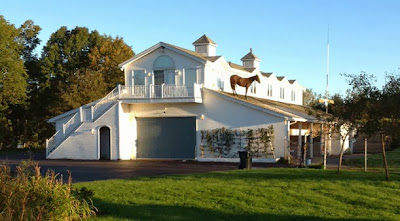 After snapping the photo, Archie – who lives on the farm with the horse -- coaxed the uninjured horse down.
The horse was able to climb a small knoll at the back of the garage to get up onto the roof.  Stephen Downey says the colt was alone on the farm at the time because several of his horses had been sent to Saint John for training.

"I think he was just bored," Downey said. "He's like a two or three-year-old kid and he was just looking for some excitement and he got into trouble like a regular kid would do."

Downey says he sent the photo to several people who also thought the photo was a fake.  "They think it's not real," he said. "They think you've Photoshopped it, but it's real and it really happened."

There was a hole in the roof where were the colt had put a hoof through. Pat Downey says it would have been a drop of more than 3.5 metres if the colt had plunged through.  "I don't think he would have recovered from it because we couldn't have gotten him out," she said.

The family has since put up a fence to block any horses from up getting up on the roof again.  "In the 15 years we've had horses, I can honestly saying nothing like this has ever happened," Pat Downey said.

There is a lot going on in this picture. In the front we have Donovan and Oskar both grooming Kennedy, while Kennedy grooms Oskar. In the background Bergie and Stormy are having a grooming session. The afternoon activities apparently called for one giant grooming session. 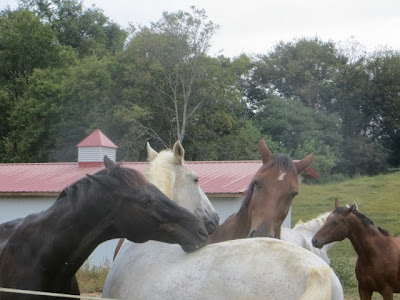 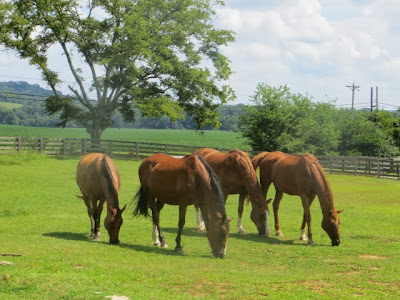 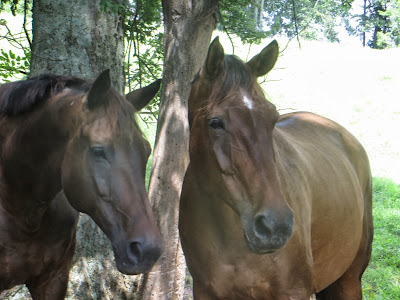 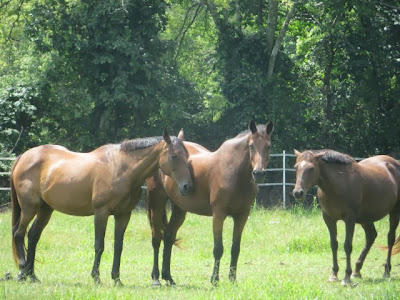 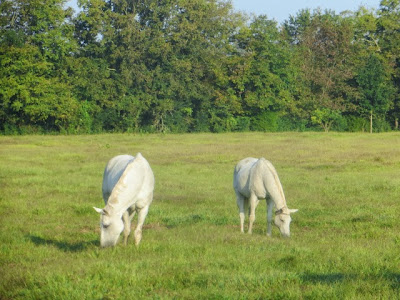 Africa, Johnny and Lighty making their way in for breakfast, single file 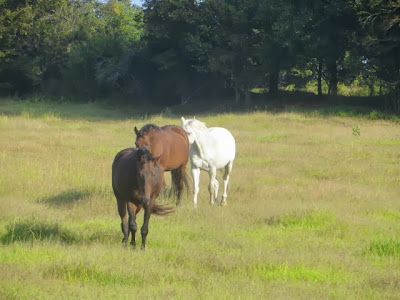 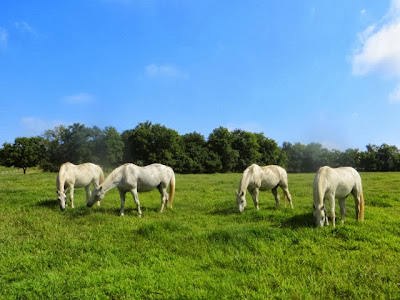 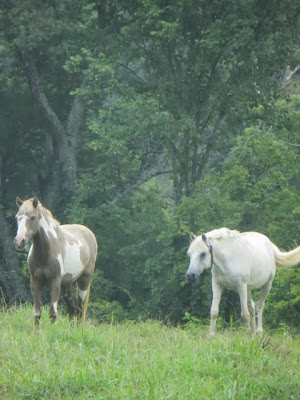 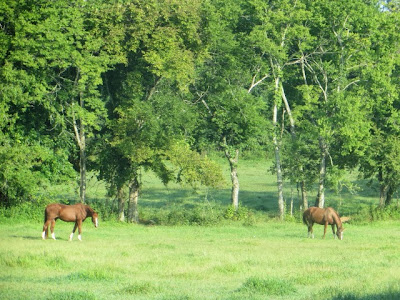 Posted by Melissa-ParadigmFarms at 8:57 PM

AS ALWAY LOVED THE STORY AND THE HORSE PICTURES. THANKS FOR SHARING. GRANNY [FLORIDA]

Yikes! I agree, I would shit my pants! But somehow I can imagine Armani getting himself into such a predicament. The horse who periodically grows roots and doesn't want to enter the same barn he does daily, often prefers to take the scariest route.

Love the day in the life on the farm photos, as always! Hemi & Apollo are heart-throbs for sure! And the greys against the sea of green and blue are simply beautiful.

I saw this article, too, and agreed that it would definitely take a few years off my life to find an equine peering down at me from a roof. I like Jason's matter-of-fact response, too.

LOVE that picture of the four greys, though for the life of me, I don't know you can tell them apart from a distance!