Elfin is a really cute bay thoroughbred who joined us from Florida. He is owned and very much loved by Stacey, and she chose us to have the honor of hosting Elfin in retirement. Elfin was Stacey's first horse, and they worked their way up the ranks in the hunters during their eleven years together.
Top Elfin and Leo; Bottom Elfin, Homer and Apollo 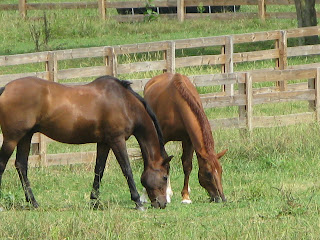 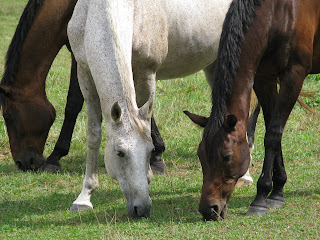 I have a lot of respect for Stacey. She has been responsible for almost all of Elfin's bills since she got him, including through high school and college. I think it says a lot about Stacey and her devotion to her horses that she has always found a way to support Elfin. In fact, Stacey told me that one of her criteria when she was looking at universities was there had to be a nice barn nearby. If there wasn't, then she wasn't interested in attending!
Elfin always likes to be part of a crowd 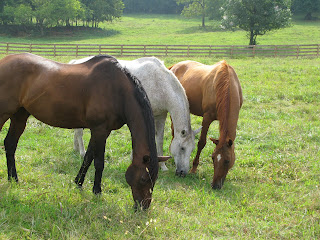 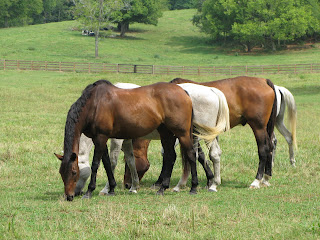 When Stacey got Elfin he was a really green thoroughbred fairly recently off the track. They showed in the 2'6" hunters for quite some time as they were both green, and she said Elfin could also be pretty spooky at the jumps. Of course, that probably also contributed to his nice jumping style! I totally believe this about Elfin because he doesn't ever under react to anything! If he thinks something is good he thinks it is really, really good. If he thinks something is bad, then it is really, really bad but all in a very non-threatening, ADHD kind of way. He has quite an endearing personality.
He'll probably be on a truck headed back to Florida after Stacey reads my next comment, but he really reminds me of Franck Eggelhoffer in the Steve Martin movie Father of the Bride. Franck was the very hyper, really outgoing, hilariously funny wedding planner in the Father of the Bride. I'm telling you, Franck and Elfin are kindred spirits!
I think they even look alike

In the spirit of Franck, Elfin is also extremely social. He fell madly in love with Grand when he first arrived and they were inseparable for the first couple of months. Over time they both started to branch out though, and Elfin definitely makes the rounds. He likes to be in the middle of a crowd and would be one of those people who never went to the bathroom by themselves. I see him routinely with each of his roommates. He doesn't tend to have just one horse that is his bosom buddy, he is equally attached to ALL of them. 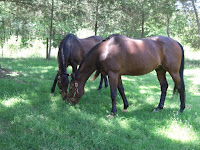 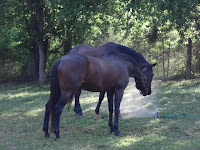 I'll get back on track to Stacey and Elfin now. Eventually they started working their way up the ranks after spending a few years in the 2'6" hunters, and their last year of showing together, 2006, was a great way to end their showing career. Stacey and Elfin were competing in the 3'6" amateur owner hunters by that point. Some of the highlights of their year include being champion or reserve at almost every show they went to, finishing up 5th in Zone 5 in the younger a/o hunters for the year, reserve champion in the younger a/o hunters at the Zone 4 finals that year, 2nd in the $5000 junior-a/o hunter classic at the Zone 4 finals and year end champion of the younger a/o's for the Central Florida H/J Association. I think we would all be happy to list those on our horse resumes!

Stacey and Elfin showing in the Amateur Owner hunters 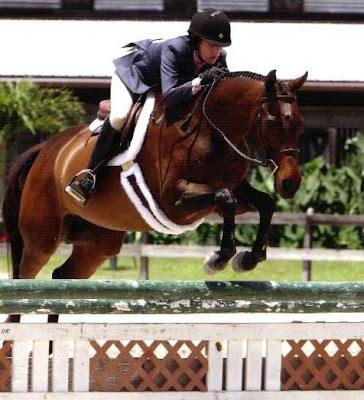 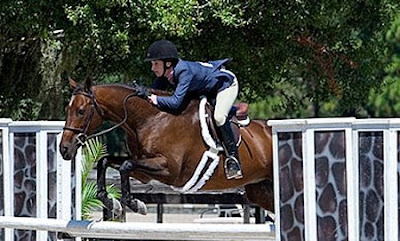 I remember when Stacey first contacted us about the possibility of having Elfin retire at our farm. I must say her approach was so typical of how we first meet our new clients. First she grilled me in a very polite way via e-mail. Then we talked on the phone and she filled me in on all of Elfin's nuances and Elfinisms. I could tell that she really wanted to trust us, liked everything I was saying, but Elfin was her baby and there is always that nagging little voice that we all get wondering if you are making a mistake. Stacey has since visited the farm and Elfin a couple of times and has been able to see for herself that the horses really are happy here!

We are thrilled that she did choose us for Elfin's retirement home, as we love having him here. Thanks for the vote of confidence Stacey, we know it was hard for you to make that final decision.
Following in Leo's footsetps; I guess Elfin heard I would be blogging about him this week and wanted to look his best 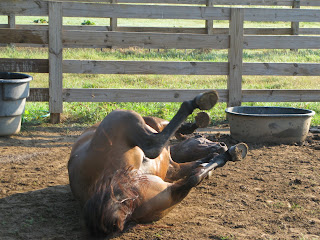 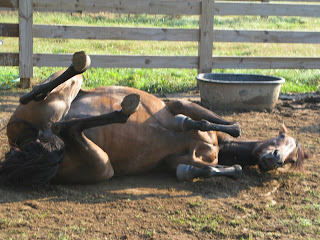 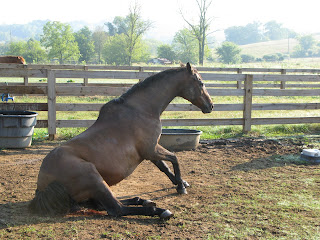 Posted by Melissa-ParadigmFarms at 6:24 PM

Hi Melissa,
I never thought that anyone but me could fully understand the complexities of Elfin's personality, but you have certainly proved me wrong. I especially love the comparsion of Elfin to Franck- that is so true! All of the pictures are great, and I had a huge smile on my face the whole time that I was reading this post. I have never once doubted my decision to send Elfin to you, and every time I get an update or see a new picture of him and see how incredibly happy he is I know that it was 110% the right thing to do for him. I am so grateful to you for taking such good care of him....words cannot even describe it.
:) Stacey

Aw, thanks so much Stacey! Elfin channels Franck and reminds me so much of him. If Elfin could walk around on two legs instead of four he would also wave his hooves all around like Franck while he was talking, throw them up in the air while he laughed, clap them together when excited . . . he is so very Franck!

Elfin is such a sweetie-boy! I am impressed at his resume! I had NO IDEA what a talented boy he is. The comparison is hilarious! Now everytime I see him I will probably be laughing my ass off!