Last week brought us a new (mis)adventure with Sparky.  Sparky has been a member of our family for 21 years, ever since that fateful day when my father felt sorry for him and bought him at a gas station on his way to work one morning. We don't know exactly how old Sparky is, but it was estimated by our vet and our dentist that he was probably 12-15 years old when my dad purchased him, which would make him somewhere between 33 and 35 years old now.

In some ways he has really started to show his age in the last couple of years.   His main issue is that he has pretty much completely stopped shedding out his winter coat. Donkeys shed their coats a lot later than horses, but last summer I basically yanked Sparky's winter coat out one hair at a time. I had been working on it again the last few weeks, but I was literally ripping the hair off of him a few hair at a time. Unsurprisingly, Sparky objected to this. We had discussed with our vets on more than one occasion that maybe we should try treating Sparky for Cushing's which he appears to clearly have. Due to the many intricacies of working with Sparky's personality, we have decided that attempting to get daily medication into him in any form is hopeless and will only make all of us miserable.

However, we were still faced with the problem of Sparky's heavy winter coat. It was, understandably, making Sparky miserable. Sparky had ceased his daily sunbathing, I rarely saw him taking his customary 19 dust baths per day, I never saw him playing with Timbit anymore. Sparky had lost much of his Spark.

As I was discussing all of this with Jason a couple of weeks ago, he made the mistake of saying, "if Sparky has lost that much enjoyment of life maybe we should euthanize him." Cue the instant waterworks from Melissa. Jason was immediately desperate enough to say just about anything to extract himself from the dilemma of the crying wife he had created, and he blurted out, "we should just body clip him."

Jason instantly regretted those words, and I immediately latched onto them. We already had a vet appointment scheduled the next week, so I decided we would attempt to sedate Sparky and body clip him. Jason pointed out all of the reasons why this was an epicly bad idea. I didn't disagree with any of them, but doggedly insisted we would stick with Jason's body clipping plan.

The big day arrived. Sparky only has two things in life that he doesn't do, injections and walking through doors. Our last epic adventure involving doors is of course not to be forgotten: Donkey (mis)Adventures Round 1 and Donkey (mis)Adventures the Title Round. As I led Sparky up to the barn he took in the scene which included my body clippers ready to go, the vet truck, and of course the vet.  Sparky immediately sensed needles coming his way and commenced immediately to dragging me around.

As I skied behind him hopelessly trying to stop him, Jason took over. He was able to briefly stop Sparky. Then the vet approached and Sparky was dragging both of them around without even putting any effort into it. Finally Bryan stepped in to help as well, and 3 grown men were somewhat able to slow Sparky down enough to give him an initial injection of dormosedan.

Sparky doesn't do injections; look at all of the hair 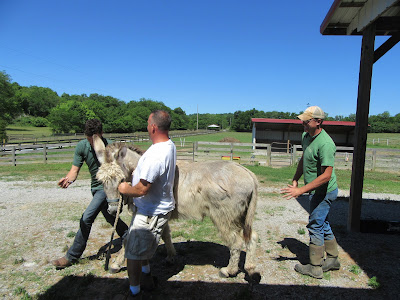 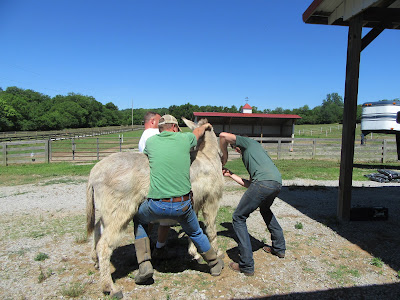 A half cc of dormosedan barely took the edge off of Sparky. We already knew Sparky did not sedate easily or well so this was no real surprise. Two more injections of dormosedan later he was finally zonked enough to commence clipping. As the vet said, any horse with that much dormosedan in them would hardly be able to stand, but that wasn't the case with Sparky. He was pretty cooperative about me clipping most of his body. I went as fast as I could with my only goal being to get the hair off, and zero attempt to avoid lines or to try and make the clip job pretty. His front legs were iffy but I got them done. Underneath his stomach was even more iffy but I got that done. His back legs I got some hair off, but most of it stayed. Sparky made it clear that he found the clippers on his back legs unacceptable. 45 minutes later and I had removed enough hair for three donkeys off of Sparky.


Sparky spent a few minutes sleeping off his dormosedan with an audience; Hesse, Remmy, Baner, Walden and Bruno 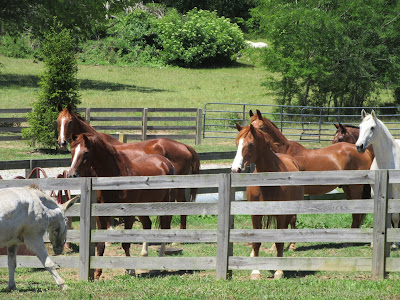 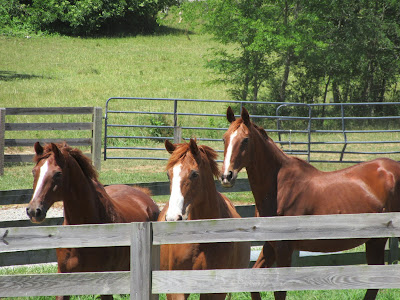 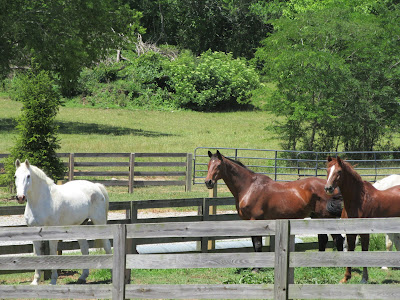 Sparky slept off his sedation for another 10-ish minute with an audience of horses staring at him. Although he lives in the pasture directly across from them and normally doesn't garner a second look, apparently a sedated donkey is an entirely different story. It didn't take long until Sparky was acting as if he had never been sedated (a horse probably would have been sedated for another two hours from the massive dose of dormosedan Sparky had).

a newly clipped Sparky immediately following one of his many daily dust baths; you can see some of his dust swirling around Sabrina and MyLight 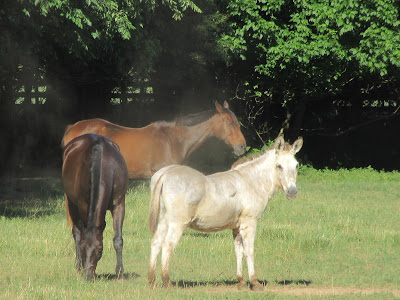 Sparky with a lot less hair 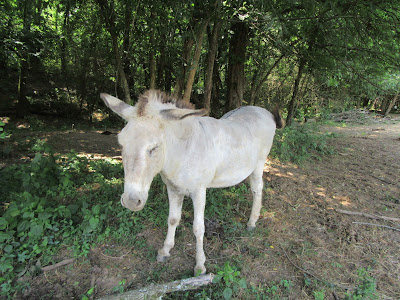 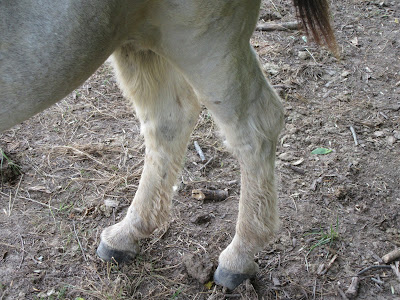 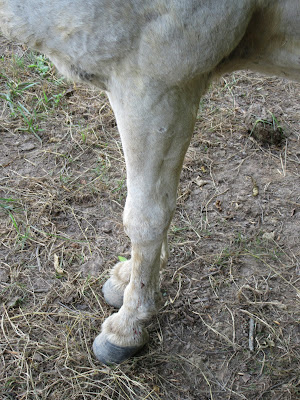 Now that most of the hair is gone Sparky has a new lease on life. He's back to sunbathing each day, taking 19 dust baths per day, and playing with Timbit. Sparky always makes it very clear when he does and doesn't approve of things. When you've done something he doesn't approve of he avoids you and won't let you near him for awhile. When you've done something he does approve of he follows you around the pasture every time he sees you for a few days. Sparky followed me around the pasture for days, he definitely approved.

As donkey (mis)Adventures go, this one turned out pretty well. 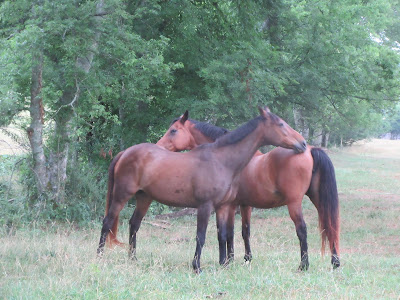 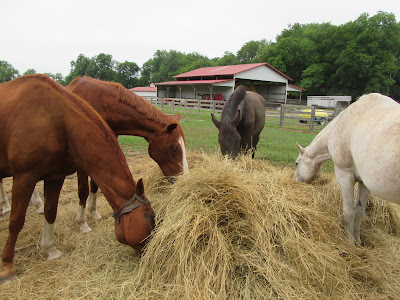 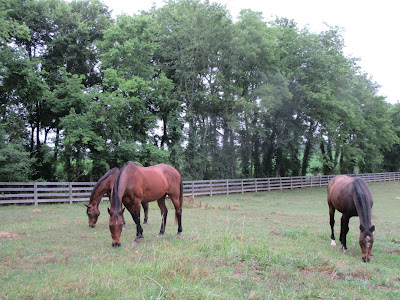 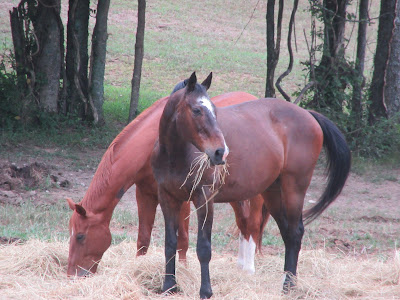 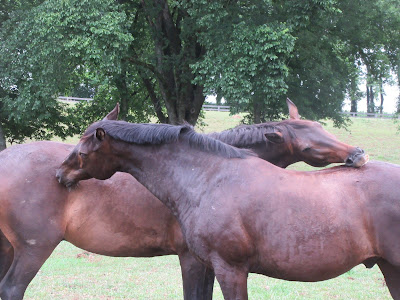 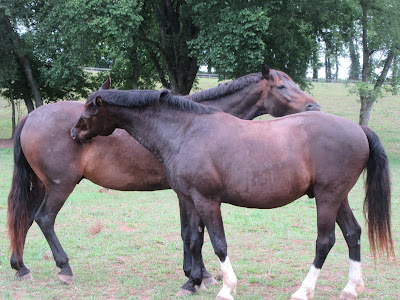 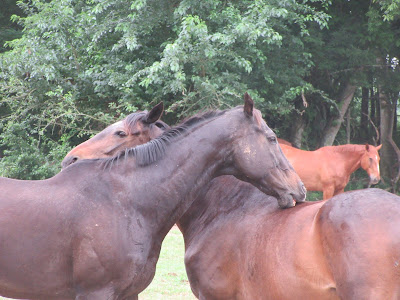 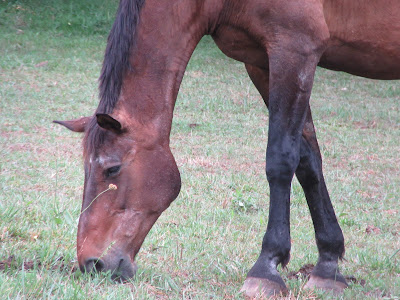 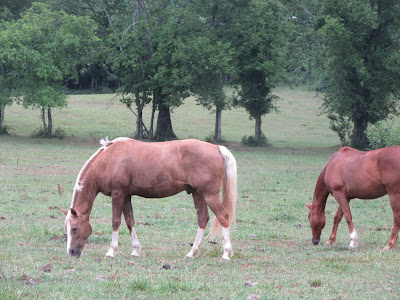 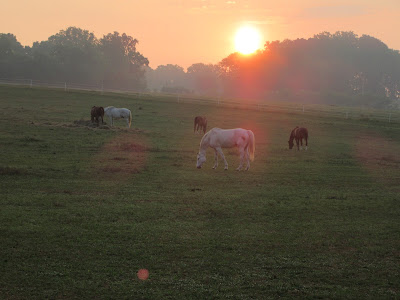 Posted by Melissa-ParadigmFarms at 8:41 PM

Email ThisBlogThis!Share to TwitterShare to FacebookShare to Pinterest
Labels: donkey

So glad to hear this (mis)adventure went well!
And with Sparky's approval! =)

I almost started crying too when you wrote that Jason said maybe it's better just to euthanize him(!). Good man, when he changed his mind and mentioned clipping instead!

He looks much happier!

I am assuming that oral dorm would not be a solution next time to at least slow him down enough for needles?

Oral dorm has no effect at all on him

I have to confess that your Sparky stories have dissuaded me somewhat from the idea of acquiring a donkey companion for Val. I don't have the (at least) three extra men required for assistance lol...

All donkeys have their quirks, CFS, but they don't all have the SAME quirks!

You did a great job with Sparky and I'll bet he really appreciates it. So adorable!

I loved this! And he looks much more comfortable. And the picture of the spell-bound horses was hilarious. This could almost be a children's book. Sparky Gets Ready for Summer. There you go.