We have fainting goats!!! Jason, the world's greatest husband ever, broke down and bought two fainting goats for me for Valentine's day. They were not ready to be weaned in time for V-day so we went and picked them up on Saturday. Jason insisted they be named Wilhelmina and Josephine. I have no idea why but he was unwavering on those two names. So they are fondly referred to as "Mina" and "Jo." My only complaint is neither of us is fully recovered yet from our bout with the flu so I haven't been able to enjoy Mina and Jo as much as I would have liked to. Jason and I are still coughing, hacking and sleeping a lot!

We picked up Mina and Jo on Saturday. We had a giant dog crate in the back of the Tahoe that took up most of the cargo area. We could have put about 10 goats in there so they had plenty of room for their short trip to the farm. I could not believe how quiet they were when we put them in the crate. They just looked around and took in their new surroundings. I guess I was expecting panic and crashing around trying to escape.

When we started driving they got a little more nervous and they talked a bit and moved around. We were on the interstate and a very noisy semi passed us. Then Jason and I heard a very distinct "thunk." One fainting goat had just . . . fainted. I will admit this made me sad. Then we heard thunk number two.

Me: I know, it makes me sad

Jason: What do you mean it makes you sad?

Me: I'm sad because they fainted

Jason: Hands getting tight on the steering well and voice becoming strained - they fainted because they are fainting goat which is what you said you wanted.

Me: It is what I want, I just don't want them to faint

Jason: So we just paid a premium for fainting goats that you now don't want to faint??? (voice sounding more and more strained)

Me: I just don't want them to be scared

Jason: If you don't want fainting goats then why did we get these two goats? We already have non-fainting goats???

Me: I want fainting goats, they are exactly what I wanted.

Jason: So did I do a good thing or a bad thing?

Me: You did a great thing. You have like one zillion new points on the board.

I think because of my continued weakened state from the flu I was not expressing myself well. I think their fainting is neat and cute but I was just sad because I knew they were scared. One minute they were hanging out with the other kids their age and the next they were in this box hurtling down the interstate.

Mina and Jo have been settling in well and are starting to get used to us. They are currently living in one of the stalls so they have time to acclimate to their new home and get used to their new people. They were both born in mid December so they are just babies. Cloudy the cat hangs out in their stall with them sometimes. They are really curious about Cloudy but he hisses at them if they get too close.

Bear is insanely jealous of Mina and Jo. When we are in the stall with them Bear basically throws himself against the door repeatedly in desperate efforts to get in with us. I think he is convinced we have new dogs in the stall since he saw them come out of the dog crate! I don't have any good pictures of them yet. I still feel too crummy to have my camera handy but I did get a few pictures of them after we got them home on Saturday afternoon.

So please welcome Mina and Jo and feel free to tell Jason what a great guy he is in the comments. He needs to get lots of accolades for this!! 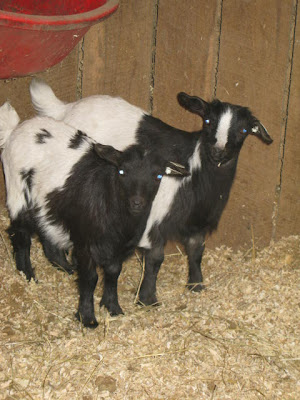 Mina on the left and Jo on the right; I'm sure they were wondering "what in the world do they want with us now?" 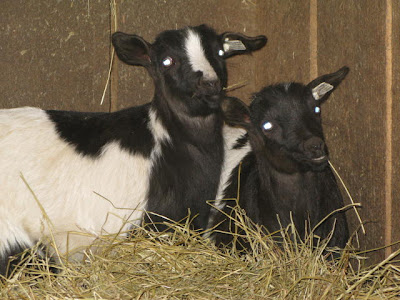 Mina; she has big, floppy ears that I think are really cute. 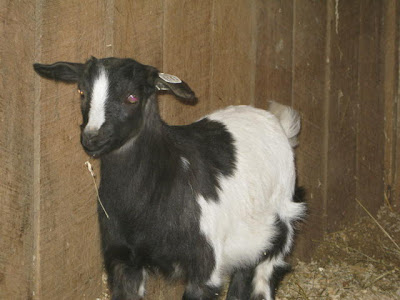 Posted by Melissa-ParadigmFarms at 8:46 PM

They are TOO CUTE! Congrats on your new additions:)

When I worked at the race track my trainer had one that was half fainting goat. Shorty still fainted. We'd sneak up on him and goose him...he'd run down the barn, his legs would go stiff and he'd fall over. When he'd get up he'd chase us around bleating his head off.

Your goats are very cute. Congrats.

Awwwww!! What a great husband to make his wife sad!! lol, just kidding you guys of course. yay for such a great husband that got his wife something she really really wanted. That is really cool to have those. I'm so jealous. nice names too. When I was little I used to want iguanas (don't know why) and I wanted a boy and girl that I was going to name Elvis and Priscilla. Then as I got older, I wanted a boy and girl pug dog (don't know why) and name them Zeus and Hera. lol Thank goodness I never had twin kids or who would know what they'd be named!! lol

Congratulations, and give poor bear a treat for me :))

They are too cute!

Fainting goats really do faint. Sometimes they fall over and sometimes they just go stiff-legged depending on the degree of the faint at the moment. As to why they do it I don't really know! The breed was developed about 150 years ago probably based around some goats with a heart defect.