More pictures of the Dogmobile

As I have mentioned before the dogmobile is my dad's Gator. He always has at least one dog, usually two and sometimes four or five dogs riding along with him in the Gator. There are a couple of pictures of the dogmobile in this post. You can meet some of the dogs in this post and Bush the coon hound had his own post. With the exception of Bear the schipperke all of the dogs on the farm are strays that somehow made their way here.

I mentioned the wonderful weather we've had the last several days. 70's and sunshine is hard to beat. That also means it is perfect weather to be out working on the farm so the dogs had plenty of opportunities to catch a lot of rides on the dogmobile the last few days.

According to Jason Bugle introduces himself like this: "My name is Bugle and I belong to Mr. Tom and I ride on the front seat of the Gator without exception." By the way Bugle is the tall black and white border collie. We don't actually know what his breeding is but he looks like a border collie with extra long legs. He is not to be confused with Bella the border collie who is also black and white.

Jason has also assigned some phrases to Bush the coon hound. According to Jason Bush introduces himself like this (and it must be said in a slow southern drawl): "Welcome to this farm, my name is Bush. Do you know how to run this machine?" Bush would be referring to the Gator as the machine. Bush lives to ride in the back of the Gator. He sleeps in the Gator waiting for someone to come and drive it around. Sometimes he refuses to get out of the Gator and my parents have to feed him in the Gator.

The other dog seen riding along on the dogmobile in these pictures is Trooper. Trooper is a 3-legged black lab mix missing his right front leg. Amazingly Trooper could be identical twins with another dog whom we lost this past summer. Sherman was also a 3-legged black lab mix missing his right front leg. I adopted Sherman many years ago from the shelter. He was the VP, Public Relations of my recruiting company and went to work with me in the fancy office park every day. My mom happened to be shopping at the mall when the local no-kill shelter Happy Tales was having an adoption day. She saw Trooper there and said for a second she got confused and thought she was looking at Sherman. So of course Trooper had a new home from that adoption day!! 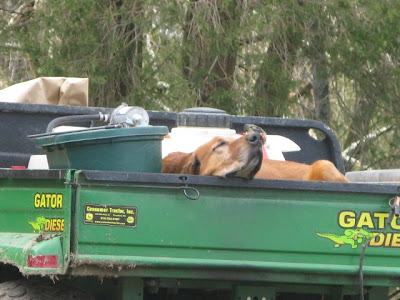 If you look closely you will see this is not the same picture as the one above. I didn't realize it as I was taking the picture of Bush sleeping but Bugle was sleeping on the passenger seat of the Gator. He woke up when he heard the camera click. That is his nose peeking over the top from the passenger seat. 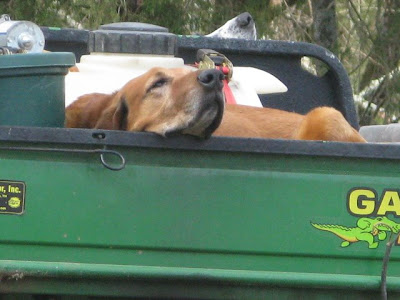 Bugle letting out a big yawn. I'm sure he is wondering when my dad is going to return to shuttle him around. How long does a dog have to wait for a ride around here?? 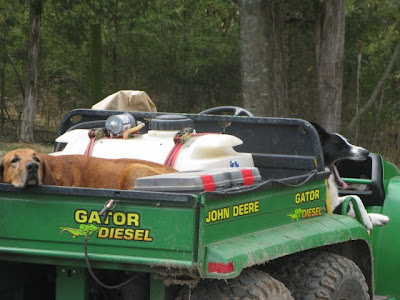 A traffic jam of utility vehicles. Riding with dad is Bush in the back, Bugle on the passenger seat and Trooper on the floorboard looking over the dash in front of Bugle. What you don't see is Bear on the front seat of the Kubota with Jason. He is too short so he is hidden from this angle. 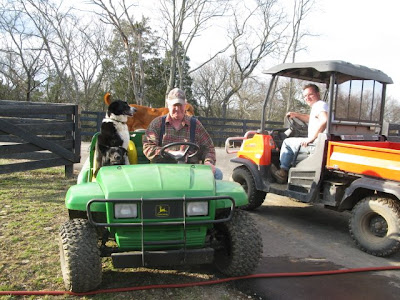 Trooper sitting up and showing off while also giving me a big yawn. 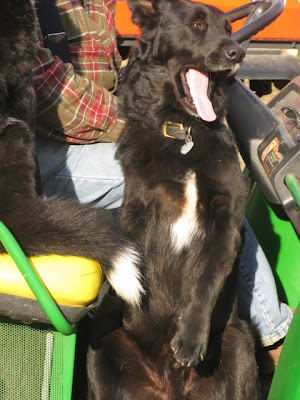 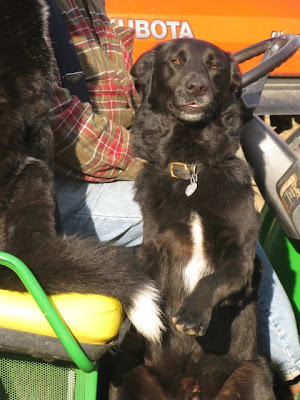 Dad driving along with some passengers 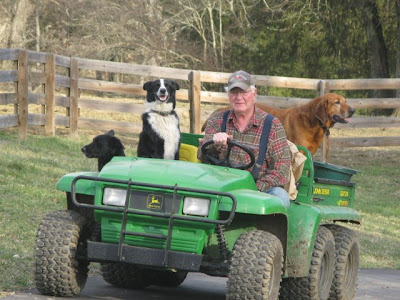 While dad and I were chatting he put his hat on Bugle. He looked really cute in it but unfortunately he has his eyes mostly shut in the picture! 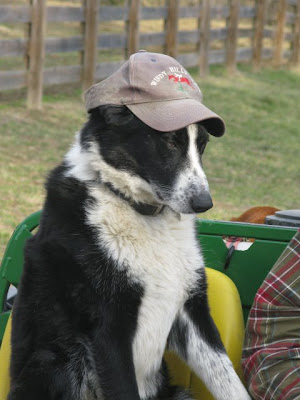 Posted by Melissa-ParadigmFarms at 8:09 PM

So very cute! You should see our two Dachshunds riding on our Gator with us. ADORABLE!!!!!!!

Hilarious. I think my big dog would really love someone to drive her around all the time. She'd be just like Bush. She LOVES car rides, but at 150 lbs, it was a little difficult to get her to fit anywhere in our extended cab truck (no cap). We have the suburban now, so she's got the whoooole back to fill up :)