Soaking Wet and Searching for Home

As I mentioned in my last post I was exhausted after my 12 hour dentist day (only two more to go - yay!). The very next day, Wednesday, was a farrier day. Thank goodness I planned my lists carefully so only a couple of the residents that saw the dentist on Tuesday had to see the farrier on Wednesday. I knew I would have runners on Wednesday as no one wants the 'special treatment' two days in a row! I barely had time to get Apollo's feed bag off him before he ran off after breakfast on Wednesday. He made it clear that he wasn't going to be caught and he wasn't the only horse who acted that way.

Lucky me it also turned out that it rained all day on Wednesday. Most of the time it was a soft steady rain, except for when I was either feeding horses or leading them in and out. At those times it was a downpour. I was so wet by the end of the day it was crazy. When I pulled my rubber boots off I actually poured water out of both of them, I was that wet. I had a rain coat on but my jeans of course were soaked and after that many hours in the rain I was wet under my rain coat as well. I could deal with all of that but I really hate it when I have on soggy soaks and my feet are soaking wet. With every step I took you could here the water sloshing around in my boots, it was quite comical to everyone but me.

It stopped raining shortly after I was done for the day and went inside. It didn't start raining again until early this morning. How convenient, no rain while I was sleeping! I was not thrilled about facing yet another day in the rain but at least the dentist or the farrier weren't going to be here. I love both of them but I was exhausted after two days in a row of hiking a zillion miles over the farm taking horses in and out of the barn, and especially tired after doing that in the rain all day on Wednesday.

I tried drying out the inside of my rubber boots Tuesday evening with a hair dryer. I gave up after a few minutes. I wasn't happy with the prospect of pulling on soaking wet boots this morning as I headed back out into the rain. I finally resorted to putting two gallon ziploc bags around my feet and taping them around my leg before putting my boots on. How undignified, I can't believe I just admitted that on the world wide web! However it was the best solution I could come up with. I guess necessity really is the motivating factor behind creativity and invention. By the way it worked like a charm, I had dry feet all day. This made me happy.

I was standing outside the shed where I keep the feedbags and feed for a few of the pastures waiting for some feed to soak (kind of an ironic thing to be doing given how it was steadily raining) when three dogs appeared that I had never seen before. I am very cautious around any strange dog but very careful around a pack of strange dogs. Bella the border collie was with me and she was pretty cautious as well which isn't usually her style. Two of the dogs appeared to be in good weight and one looked a little thin although not too bad. One of them had a collar with a rabies tag on it, one had a collar with no tag and the third one had no collar. I wasn't sure if they were strays or if they lived in the area or what.

They hung around while I fed the last two groups and when I started walking back to the barn they took off through one of the pastures. I thought they were moving on as they were heading away from the barn and I didn't really think too much about them. However when I walked up to the barn they were all three already there. Just as I approached the barn two of the dogs, one that looked like a Great Pyrenees mix and one that looked like some kind of hound mix, spotted The Don, one of our two roosters.

In a split second the two dogs had The Don and were trying to kill him. I grabbed a broom and managed to beat them off of him. I wasn't able to see how badly he was hurt as he ran off into the woods, however there was quite a pile of feathers at the scene of the crime. Thank goodness the fainting goats were still in their stall. However these two dogs headed into the goat pen where Billy and Bubba , the non fainting goats, were in their houses. The dogs didn't seem to show any interest in going after the goats but they may have been too scared of crazy broom lady (me) at that point. Jason was not home so I called my dad to help me as I could not get them out of the goat pen. He wasn't too thrilled about heading out in the rain but he came.

We finally ran them out of the goat paddock and away when he fired a couple of shots into the air. I shut the gate to their pen in case they came back. The third dog that was with them did not get involved in trying to kill The Don or run into the goat pen. She just kept trying to come up to us and desperately wanted to be friends. She is an older dog with lots of gray on her face and slightly arthritic back legs. She looks like a black lab mix of some sort and she is very sweet and friendly. She spent the afternoon sleeping in the parked Gator in my parents' garage with the other dogs and then followed me around again for a couple of hours this afternoon while I did chores. We called our vet as she was the one with the rabies tag. They looked up the number in the state database but unfortunately there was no information associated with her tag number. They told us that if she had her rabies vaccination at one of the rabies clinic days that they often don't record the owner information.

Such a sweet face, I hope she is reunited with her people soon. 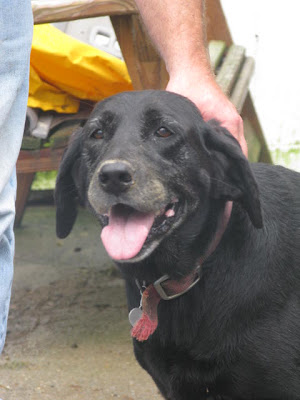 She is in good weight and is very friendly. I don't know if she is lost or if she was dumped. We'll be putting some fliers up tomorrow in a few places to try and find her owners. I hope we find her people. In the meantime she has been fed and has a nice dog bed to sleep on. We are nice to strange dogs as long as they don't bother any of our animals. But if you chase our dogs, cats, horses, goats or chickens then we are not that nice, especially if you try to kill them. The good news is I saw The Don this afternoon and he was fine, albeit missing a lot of feathers. He was out pecking around for bugs with his hen by the barn.

I hope everybody has a nice weekend. I am hoping for a dry weekend myself. 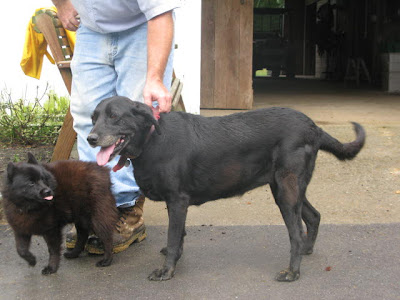 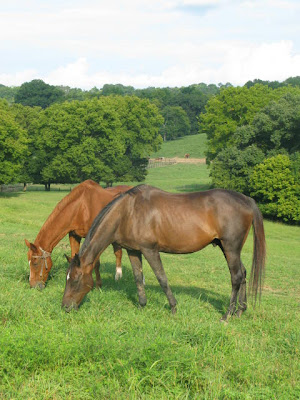 Trillion walking through the fog one morning. Trillion is a Dutch Warmblood and was a nationally ranked show hunter and circuit champion at the Winter Equestrian Festival more than once. He has really big, floppy ears. I love it when he trots through the pasture because the flop along in rhythm with his stride. 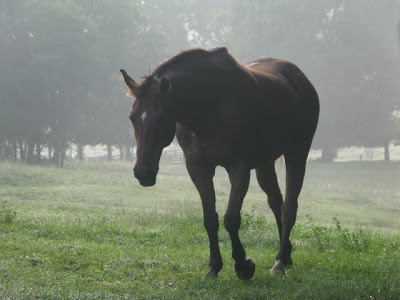 Asterik and Winston decided to have a group rolling. Asterik went down first and Winston is on his way down behind him. 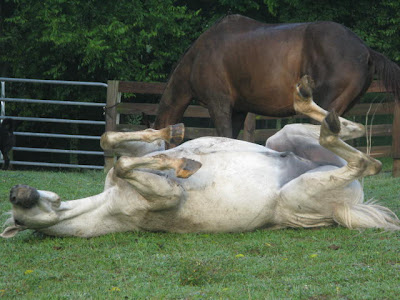 Both of them rolling 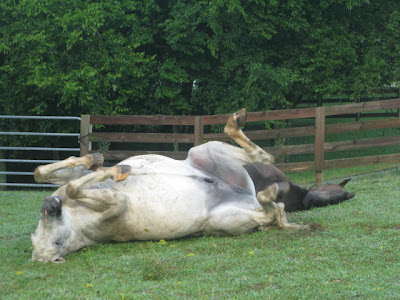 Asterik had a head start so he finished first 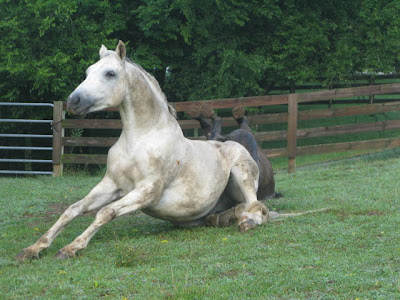 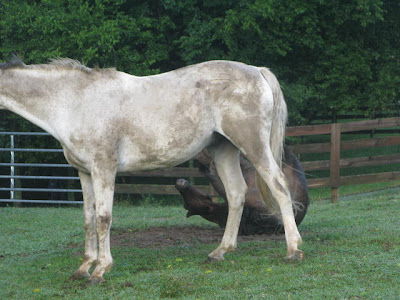 Tony had a nice roll in the dust. Tony is another Dutch Warmblood. He was nationally ranked in the top six in the amateur owner hunters. 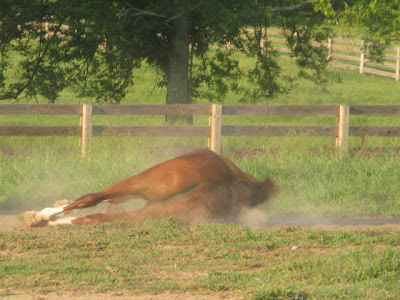 He was feeling frisky from his roll and trotted off, leaving his cloud of dust behind. 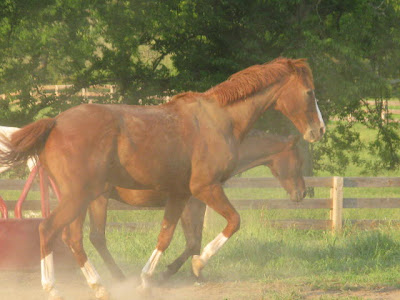 Chili looking at me over the fence hoping for some food. 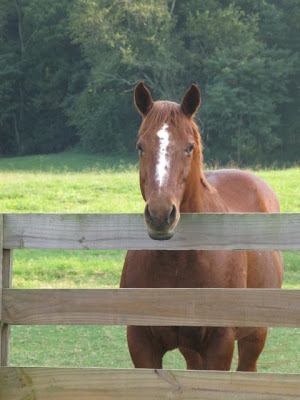 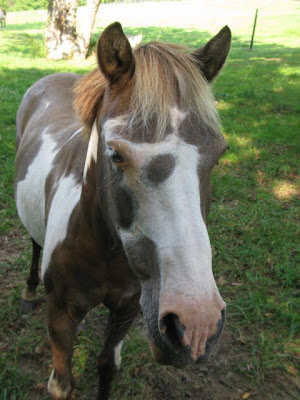 Traveller did the same thing 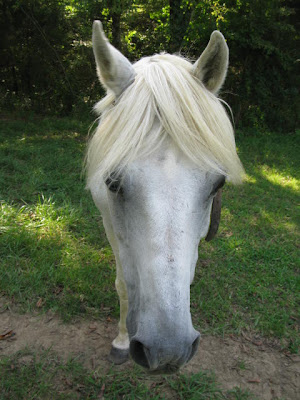 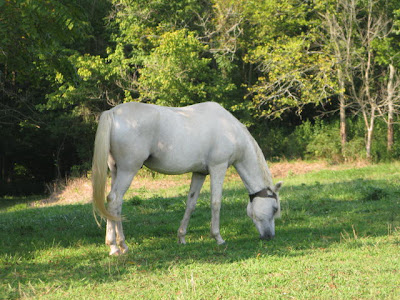 Two of my girls grazing, Sky and Bridget 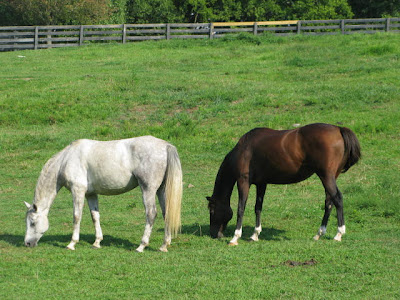 Posted by Melissa-ParadigmFarms at 7:36 PM

I know what you mean about water in your boots - I've been there!

I sense that you may have a new doggie addition shortly - although I hope you find her people. Luckily we rarely have loose dogs around here.

Awwww the lab looks just like my old lady who I had to put down this year. I hope you find her people or can find her a good new home. Bless you for caring for her.

It figures Apollo would run off! I saw how much he hated to come up the hill last year. I hope you find that poor old dog's people. I know she will have a home with you if you don't. She looks just like the old Lab we had when I was growing up!