I've been really busy with Bonnie and Sky lately. I had several rides where I worked on transitions, transitions, and more transitions. As I've mentioned before my goals with Sky have been to get her supple and swinging through her back and pushing from behind, and getting rid of the "headset mentality" she had been taught. I can't say enough great things about Sky so far. She really wants to please and tries very hard for you. I am starting to get really attached to her and look forward to our time together every day.

We started out with a zillion walk -halt-walk transitions. We made great progress in our first ride. Her downward transitions from all gaits follow the same sequence: stiffen the jaw, raise the head, hollow the back and then fall out of the gait. Her upward transitions involved the same sequence although not as pronounced. I don't know how many times we went from the walk to the halt and then halt to walk but it was a lot. I tried to focus on using the softest aids possible and using my core to ask for the halt and not rely on my hands. For the upward transitions I tried to think walk and use soft aids as well. In our first ride Sky made a lot of progress and her downward transitions continue to get softer and more balanced. They still aren't perfect even after a few rides focusing on transitions but they keep getting better.

Her upward transitions improved by leaps and bounds and now we often have very nice upward transitions both to the walk and to the trot. The canter transition is still a work in progress although improving each ride. The difference in the quality of all of her gaits with an improved transition is remarkable. She is a lovely mover on her worst day but the softer she stays through her topline, and as she learns to really push up into the gait with her hind end, she is getting more and more suspension in her gaits. I had my best ride yet with Sky on Monday. We had moments at the trot that you treasure as a rider with a true, elastic connection on a horse that was soft, round and completely on the aids. I also jumped my first jump with Sky on Monday, just a crossrail at the end of a grid of trot poles. She stayed very soft and relaxed through the grid and I was thrilled with her. We've been incorporating ground poles into all of our rides as I've kind of been starting her over in a sense. Jason is very happy to see how well Sky and I are getting along and enjoying each other!

I also had a couple of rides on Bonnie where I really focused on transitions as well. I have to say after a couple of days in a row of riding both of them through countless transitions my stomach muscles were just aching from working my core so hard! The idea with Bonnie was to try to have her be truly on the aids instead of always trying to stay one step ahead of me and guessing at what we will be doing next. She is much further along than Sky in the sense of truly being able to go on the bit at times and has better transitions as well, but as I've discussed before she is a much harder horse for me to ride for many different reasons.

At first the transitions seemed to just fry Bonnie. She couldn't guess and anticipate what would be coming next and that seemed to really rock her world. She got very anxious and almost frantic at times. I backed off on the frequency with which I was asking for the transitions after the first ride, and also remembered to tone down the aids I was using to ask for them as well. That helped her mental state a lot although she still wants to try and stay ahead of me. When I feel her starting to get tense and trying to anticipate I've taken to just bringing her down to a walk and then a halt. Then we just stand around as if I might be chatting with someone else until I feel her take a deep breath and relax. Then I give her some big pats and we carry on. This has helped her a lot.

I feel like I have to try and stay conscious of so many things when I ride Bonnie. Stay super soft in my arms/hands and resist the urge to get into a tug of war with her, remember to very softly whisper my aids to her, visualize what I'm asking her to do, etc. I told Jason that riding this horse is going to turn me into a Zen master or something!

I've also done several ground driving sessions with both Sky and Bonnie. I love to ride out of the arena, both to trail ride and relax and to do our regular work but just in a different setting. I also think it is great conditioning work to go up and down the hills, and it is such a great way to teach them to get off their forehand without drilling in the arena. My problem these days is there is something occupying every field. And even trail riding around the pastures in the alleys and such can be a challenge. The horse population here is so stable that everyone notices a new face whether it is being ridden or lead around. Where Bonnie and Sky live it is the one pasture that is very separate from the rest so the other horses never really see them and vice versa.


Me and Bonnie; I've just used a halter and surcingle for our ground driving sessions. I don't have any pictures of me with Sky. 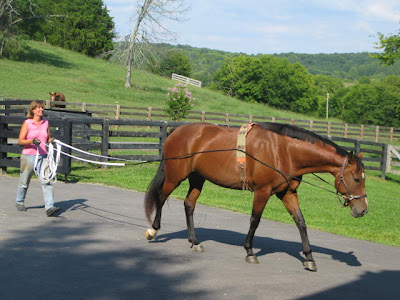 Thus we've been ground driving and getting used to all of the horses charging up to the fence and then running along with us. We've ground driven through the pasture with the pet cows who tend to want to follow any horse and human around. We ground drive past Norman who is screaming his head off and running along the fence with us because one of his women isn't in the pasture with him, and past my parents house when all of the dogs come running out of the garage barking to see what is going by. We also weaved our way around in some of the wooded areas. Both on the lines and under saddle this has been especially good for Sky. I can tell that she is very used to being ridden on groomed surfaces, whether it be an arena or not. Our first foray into the woods I think she tripped over every branch and log we encountered for a few minutes. She quickly figured out that she needed to pay a lot more attention to where her feet were, apparently not something she's really had to do before.


The first thing both of them had to learn was that stopping and eating was not part of the program! 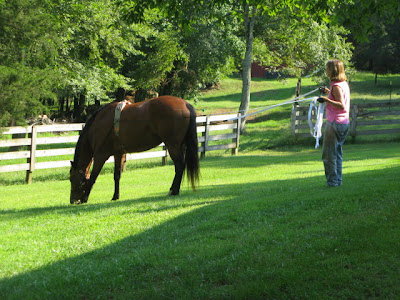 After about three sessions each of seeing all of the above mentioned sights and sounds (and more that I didn't mention!) while ground driving, I've now ridden both of them around the farm and past all of the excitement. They were both nervous the first time but Sky was going almost everywhere on the buckle at the walk by the second ride. The cows trying to come up and follow her were the only thing she still got nervous about which is pretty understandable! Bonnie was a lot more relaxed on the second ride as well so I was happy with both of them. We'll keep getting out of the ring and touring the farm and in a couple more rides I think we'll be ready to do some actual work out in the cow pasture in addition to just cruising around. I also have to open and close gates from horseback on these rides and they've both been very good about that as well.

All in all the last few weeks have been very productive for me, Sky and Bonnie!


Jason has decided he likes the idea of driving a horse (riding not so much) so I think I might get a harness and actually teach one or both of them how to be a driving horse. 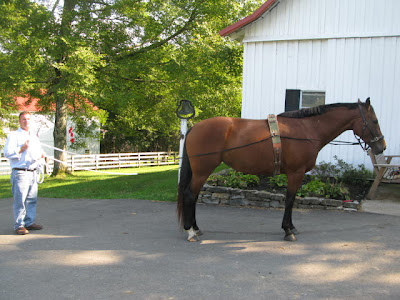 Leo and Elfin grazing; both showed in the hunters and Leo was a 4th level dressage horse as well 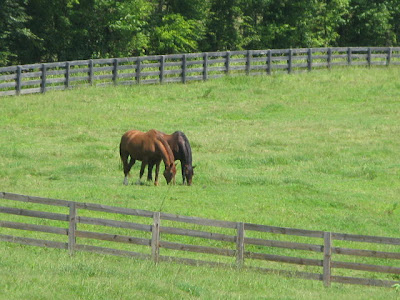 Mr. O'Reilly and Teddy; O'Reilly was imported from Ireland and showed in the equitation, hunters and jumpers. I watched him cantering through the field today throwing in lead changes every few strides. His canter is gorgeous and very balanced naturally. Teddy is a quarter horse and was ridden in dressage. 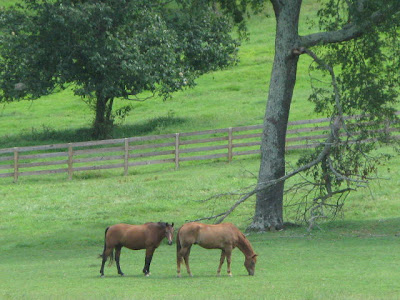 Traveller walking along with Norman behind him. Traveller is a large pony and was champion at places like the Washington International Horse Show. Norman showed in the medium pony hunters and he won more than his fair share as well. 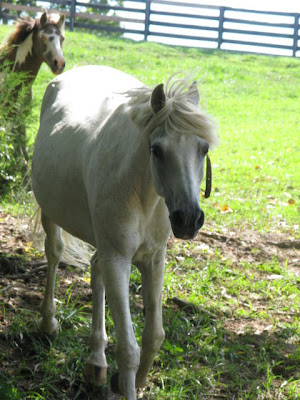 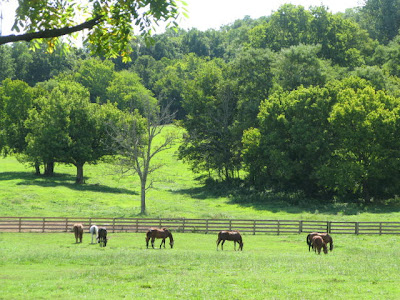 Sparky the donkey; Sparky has not ever had to work a day in his life 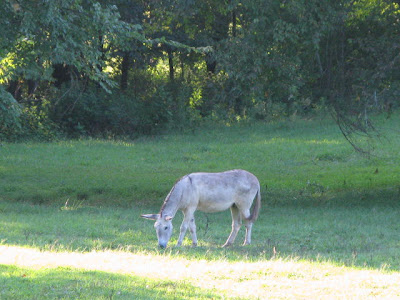 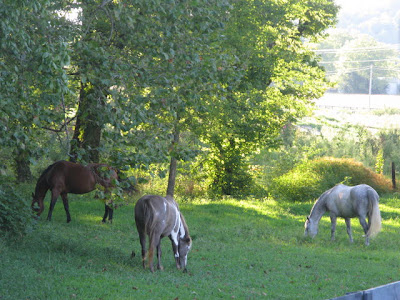 Traveller and Bridget; Bridget is my retired show hunter. 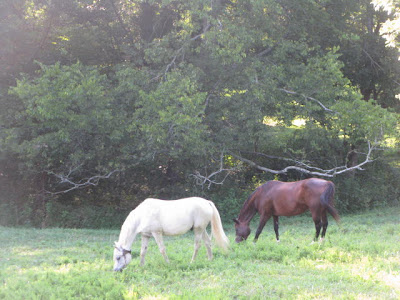 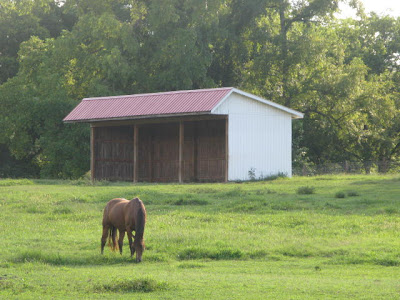 Apollo; Apollo is huge (18.1 hand hanoverian) and was a dressage horse 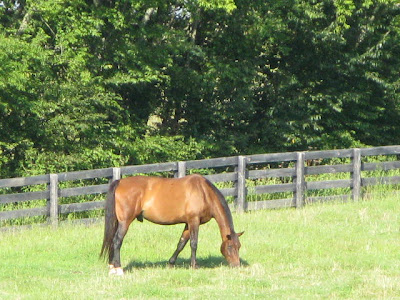 Chance with Homer behind him; Chance started life at the track, then worked as a carriage horse pulling tourists around in New Hampshire. I'm told he pulled either a carriage or a sled depending on the season. Homer was also imported from Ireland and was circuit champion at places like the Winter Equestrian Festival in Florida in the hunters. 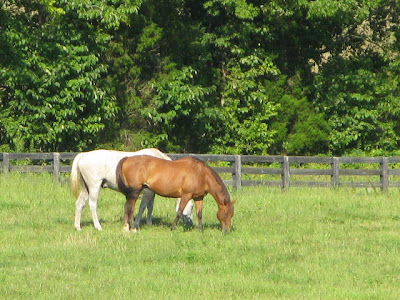 Posted by Melissa-ParadigmFarms at 8:02 PM

Great to hear about how Sky and Bonnie are doing - it all sounds really good. Liked the pictures of you ground-driving, and the one of Norman with his "harem"! Norman actually drives - we discovered this when we got a harness and cart for him.

I always like hearing the progress of other riders....even though I don't understand all of the terms used by hunt seat riders.... transitions, aids and moving off/thru the bit? It's like a foreign language to me. I'll get it some day if I keep reading you and Kate's posts! lol! You're trying to keep yours from setting their head so much lol...we're trying to get ours to but not to an extreme like so many show horses are these days. Great ground driving photos too...Jason too! Glad to hear your consistent work is paying off for you!

Maybe problem solved: Bonnie becomes Jason's driving project?! I vote yes. That would be so cool.

Boy have I done my share of ground driving the last few weeks!:) Bonnie looks great, and I also had to deal with grazing while ground driving.....