Stressful Day and Horses in the Fog

Today was kind of one of those days where it might have been better if I had just stayed in bed and pressed fast forward to tomorrow. The weather today was like we have had the last several days, overcast and looking like it could rain at any moment. It rains at some point every day (or night), sometimes just a brief shower and sometimes a downpour that lasts for awhile. The mud around the gates is simply charming (not) although the horses certainly seem to like it!

Today was a feed delivery day. I don't like feed delivery days. Lugging around literally a ton of feed in 50 pound bags and distributing it around the farm is hard on me. I am not the strongest person in the world and the repeated lifted and carrying of those bags certainly takes some effort on my part. I was definitely feeling cranky about dealing with it, not to mention they were also delivering shavings and other stuff.

As I was unloading my first load of feed from the Kubota into the back shed I looked around at the horses in the pastures around the shed to see what they were up to. I am always scanning the pastures and watching the horses and I can tell from a distance if something is not quite right. I noticed Ivan was down in dead horse position but thought nothing of it as he is a huge napper and likes to nap in dead horse position all the time.

However when I was back down there with my second load of feed in the Kubota he was still down and I immediately had the feeling something was not quite right. I went out to check with halter in hand. Ivan was resting quietly and at first I thought maybe I had over-reacted. However he did not really want to get up when I asked him to get up. He did, but then almost immediately laid down again. He didn't roll, thrash, nip at his sides, make any distress noises, or do anything other than just want to lay quietly on his side. I made him get up again and we started our long, slow walk to the barn. Ivan lives in the field farthest from the barn so we had a hike. Ivan tried to lie down several times on our trek to the barn and his whole body would tremble tremble at times like he was in a lot of pain.

I called the vet clinic on the way to the barn and thankfully one of the vets that I work with the most happened to be right in our area. He arrived about 10 minutes after Ivan and I made it to the barn, talk about great service! Ivan's temperature was normal, he appeared hydrated, had good gut sounds on one side and moderate gut sounds on his other side, vital signs were excellent . . . and he tried to lay down twice while the vet was examining him in the barn aisle. A rectal exam found some very normal looking manure and nothing felt out of place. Torbugesic was administered for pain and we did go ahead and pass a tube to put some oil in in case of an impaction, and the vet drew blood to run his bloodwork (which all came back normal).

I was worried about Ivan as he has quite a few melanomas (many gray horses have these), including one on his sheath and one under his tail. It does make you wonder what they are doing, and possibly putting pressure on, internally. Thankfully once the Torbugesic kicked in Ivan immediately was acting like his normal self. I am happy to report that almost 10 hours later, and long after the meds have cleared his system, he is still acting very normal and very demanding about wanting hay. He has also passed a few very normal looking manure piles, go Ivan. He had a small flake of well soaked hay about an hour ago which he eagerly devoured and will have more in another hour. His BFF, Apollo, has been pressed into service and is spending the night in the barn with Ivan in the neighboring stall. Ivan would not calm down until we brought Apollo into the barn even though other horses were in there. Ivan detests the barn but will tolerate it with Apollo next to him.

We suspect that Ivan went down to roll and ended up with a mild displacement. The long walk to the barn combined with the poking and prodding by the vet probably provided just enough jostling for it to right itself. Although at this point it looks like we might have dodged the bullet I am still worried about Ivan and we've spent most of the day staring at him in his stall. When he poops we rush in there and swarm his manure to look at it. I am sure he thinks we are nuts.

Hopefully Ivan will continue to act like nothing ever happened and tomorrow will be a better day. A much better day.

I love horses in the fog. For some reason it makes them look even prettier and more majestic to me. I took several foggy horse pictures one morning. This one has B-Rad in the front with Asterik, Winston and Ogie behind him. 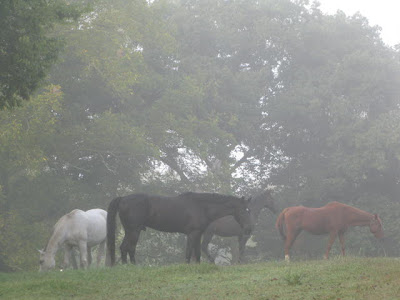 There was so much fog you can't really see the horses at all in this one. You can barely see the outlines of Clay, Snappy, Teddy, Lucky and Lightening. 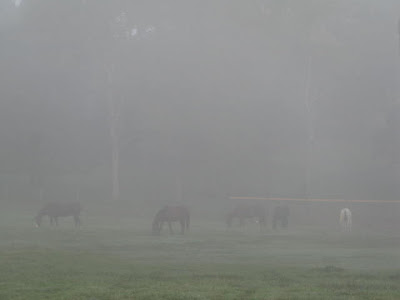 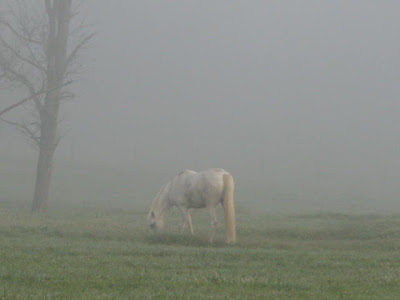 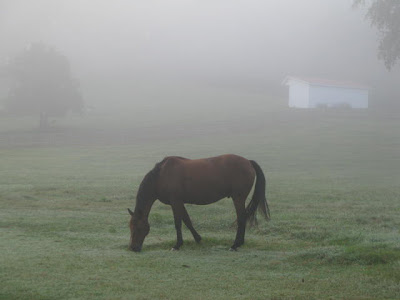 Teddy with Lightening in the background 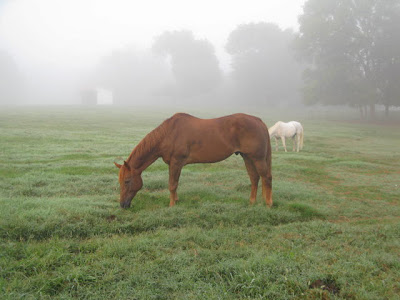 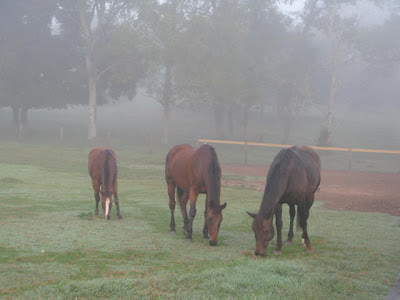 MyLight in the front with Harmony hiding behind her. In the back L-R is Missy, Buffy and Lily. 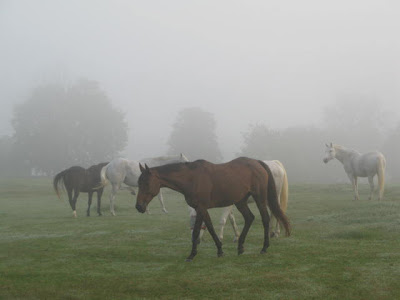 And a few non-fog pictures. Look at that gorgeous sunshine, I wish it would come back - it seems to have abandoned us lately! L-R Trillion, Winston, Faune, Asterik and B-Rad. 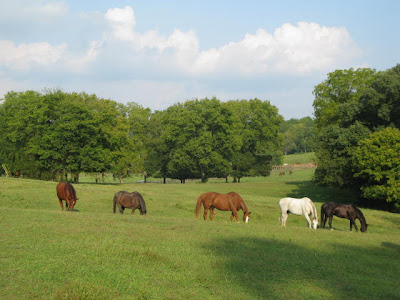 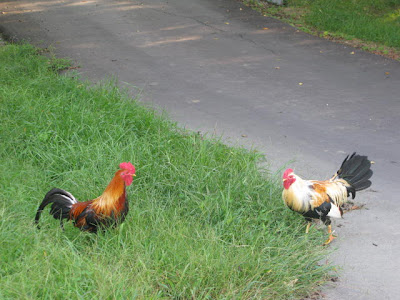 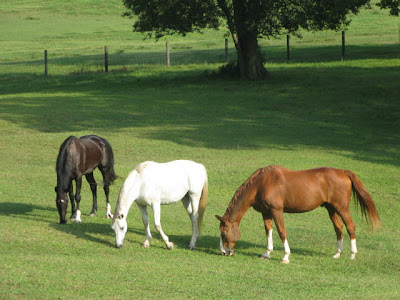 Poor Ivan! Glad he seems to be feeling better already. Those colicy episodes are very scary - it's great that you're "eyes on the horse"!

According to the rest of the world, we horse folks ARE nuts. Not many other factions have such a strong fascination with poop afterall!

Glad Ivan is holding his own and gaining for you. Poor fellow. (And poor YOU with feed duty. Ugh!)

Oh I know too well how those episodes
go....does not make for a great day. You are very fortunate to have the Kubota....could be a worse distance to carry without it. You had a physical and mental workout...exhausting. As I read about Ivan's behavior in his stall without his buddy it reminded me of Romeo yesterday when Glory was out and he was in waiting to get his hooves trimmed. He has not acted like that before. We had a busy day yesterday. Funny your words about examining Ivan's BM... made me get a visual of flies swarming! LOL! Love the photos. Hope today is relaxing for you.

Ivan seems to be holding his own this morning and he seems normal. He had a couple of good poops through the night and he's eating well. We'd be much happier if he would drink more water though !

The visual of everyone swarming around Ivan's poops reminds me of how we parents react to a new baby - everything they do is of upmost concern and interest. I guess this would be the downside of hosting retirees :(

I hope Ivan is OK and I am glad my boy could be of service. Love the horses in the mist. Oh, about the baby chicks: Pete says you have to teach them how to eat otherwise they won't eat. You do this by putting some feed in your hand or in the feeder, hold the chick in the other hand near the food, and tap tap tap with your finger(of the hand holding the chick) next to the food so they get the idea of pecking. You keep doing this until they understand and start pecking for themselves.

Ivan appears to be fully recovered. As soon as he was back out in his pasture he took a huge drink from the water trough. Go Ivan!!

So glad to hear Ivan is alright! He must be more used to drinking from the pasture rather than the barn, huh? I am sorry to hear you had such a trying day, I felt exhausted for you!

This is exactly why your services are in such high demand, I imagine. Quality care like that is amazing.