Yesterday was a GREAT day! Not only was the weather spectacular again but three huge trucks full of gravel came rolling up to the farm. You know you love your farm when, more than 24 hours later, you are still elated over this turn of events! My horse friends totally get my sheer bliss and joy about three loads of gravel. My non-horse friends don't get it at all.

I could stand and stare at this lovely, gravelled gate area for hours 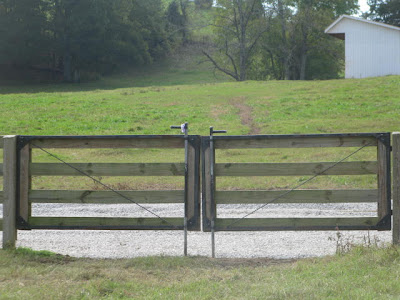 After all the rain we've had I was beginning to think the trucks would never be able to make it out here. Thankfully a few days of 70's and sun dried things up and the trucks were able to dump gravel in several places around the farm.
It is almost impossible to keep the areas around the water troughs dry because of the constant dumping and scrubbing, so the troughs are all getting a gravel pad. 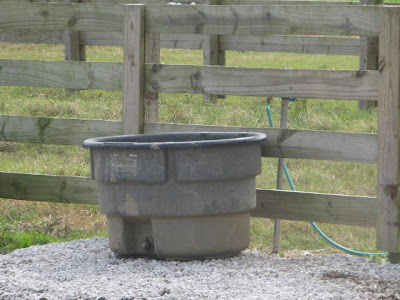 Another gate area with gravel spread 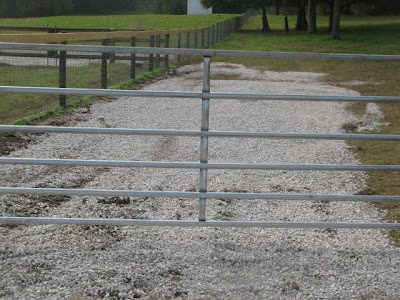 The horses found the presence of gravel piles in their pastures terribly exciting. The big boys especially used their gravel pile as an excuse for much running, snorting and spooking. Jason has moved and spread about half of the gravel. The delivery trucks could not spread the gravel because it was still wet in some areas and the last thing I wanted to deal with was a 40 ton gravel truck stuck out in one of the pastures. Thus Jason is getting some tractor hours in, using the bucket to move and spread the gravel.
This used to be our wading pool in the middle of the alley; you will recall we put a tile drain in a few weeks ago to drain it, and the gravel got rid of the last of the mud 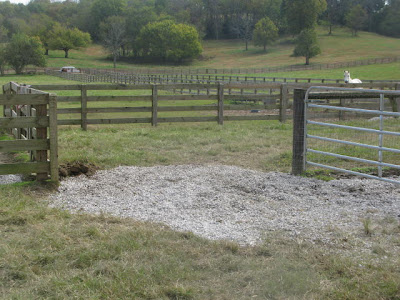 The shed where we keep feed, blankets and halters for some of the pastures. My blanket wagon and the little trough I use for soaking feed are in front. 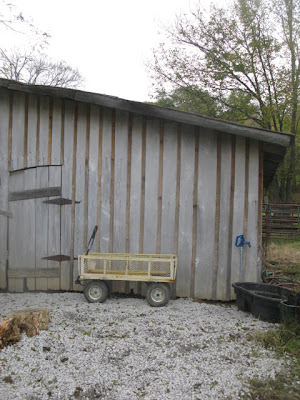 Hopefully we will be able to finish moving and spreading the gravel in the next few days. I am ecstatic over the areas we've already addressed. I had Christmas in July when I got a new horse, and now I'm having Christmas in October with my gravel. It really takes a horse person, or a farm person, to understand why gravel is such a life changing event!
The best part is that we don't get the knee high, boot sucking mud that I experienced when I lived in New England (that fifth season called mud season), so it only takes a couple of inches of gravel with no site prep to solve mud problems here. We should not need to add any more gravel for a few years. Winter should be much more pleasant this year now that all of the gates will have large, gravelled areas. The main reason this is such a big deal to me is because I spend a lot of time in the mud around the gates every day. That is where the horses gather to have their feedbags put on so it will be nice to not be doing that in the mud.
I hope everyone has a great weekend, I'll be enjoying my gravel!
The big boys come running over when they notice the pile of gravel. It becomes a great excuse for lots of snorting and spooking. Levendi is the 'brave' one who paws at the gravel.

For anyone who is interested, this is a video clip from feeding the fish in the pond the other day.
Lightening grazing in the front while Teddy naps and Mr. O'Reilly grazes in the background. Lightening is an Arabian and retired trail horse. Teddy is a Quarter Horse and retired from dressage. O'Reilly is an Irish bred horse retired from the jumper ring. 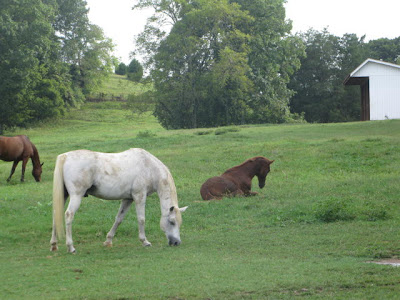 Snappy and Chili grazing. Snappy is a Polish bred horse who competed through the 4 star level in eventing and then switched to a career as a show hunter. Chili is a Quarter Horse who worked cattle and hit the trails. 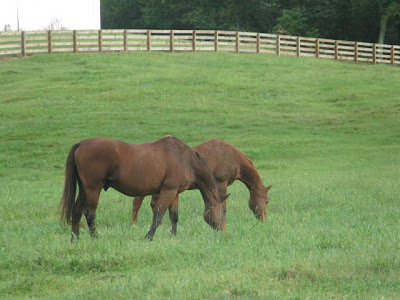 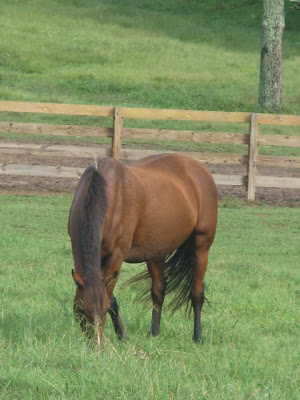 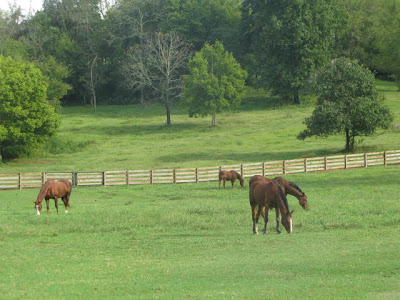 Cuff Links and Lily. Cuffie is a Welsh Pony and showed in the pony hunter divisions (medium). Lily is a Quarter Horse/Warmblood cross and she showed in the jumpers. 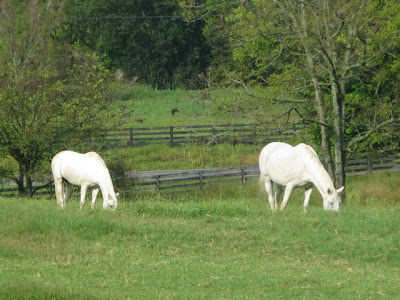 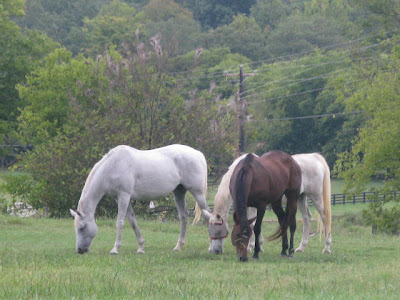 Ivan and Apollo hanging out. Ivan is a Thoroughbred and retired Grand Prix jumper. Apollo is a Hanoverian and retired dressage horse. 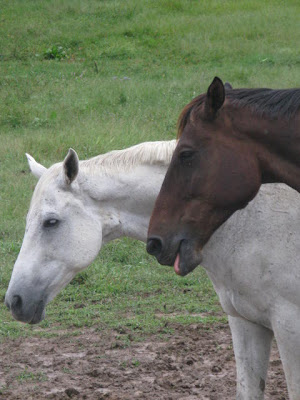 Asterik, Trillion and Winston. Asterik is a Holsteiner and he showed on the A circuit in both the hunters and jumpers. Trillion is a Dutch Warmblood and was one of the top horses in the country in the Regular Working Hunters. Winston is a Thoroughbred who also showed in the hunters. 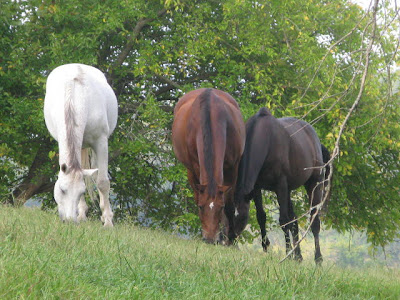 Ogie and B-Rad hanging out. Ogie is a Thoroughbred and retired event horse. B-Rad is a Belgian Warmblood and retired show jumper. 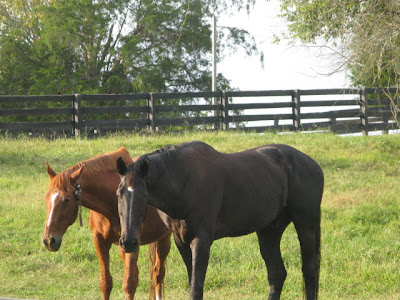 Sebastian and Faune grazing. Sebi is a Connemara/Irish Draught cross imported from Ireland, and he was one of those horses that you could do everything with. He foxhunted, showed in the hunters and the jumpers, he evented, did trail riding . . . what a great horse. Faune is a Selle Francais imported from France and he won everywhere in the hunters. 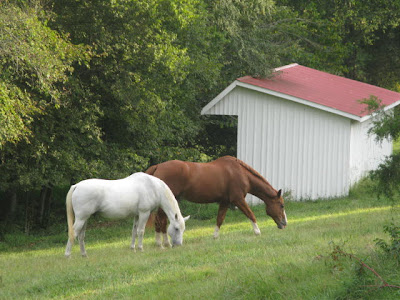 Posted by Melissa-ParadigmFarms at 9:05 PM

Boy, am I envious! We could sure use 3 truckloads of gravel around here. We've got that wonderful (for growing things including grass) clay soil that turns to slippery mud and then dries to hard as rock clumps.

I watched that video twice!! I love watching your fancy retirees, they are fabulous!! Congratualtions on the gravel, oh the joy of the little things.

Ok I definitely am excited for you about the gravel, but I must admit I am more envious!!! We need a load of gravel in 1 spot in particular at one of the gates.

Ah yes, lovely gravel! For me, on the high plains of Colorado with sandy soil I actually get loads delivered, too. Mud? No. It's because of W-I-N-D!!! Every couple of years, even after using a tractor & blade to smooth it back, there's enough worn away in places that a good couple loads of pea gravel do the trick.

Brave, brave Levendi . . . I noticed Trigger was none too excited about getting close!

Levendi is ADORABLE and the bravest boy ever! Trigger was too funny - reminds me of how my horse would react. The whole time, I was thinking, "boy, glad I'm not sitting on Trigger!"

Oh boy, am I ever jealous. I just got home from plunging around in the knee deep mud around the gates at the barn! What I wouldn't give for a few truckloads of gravel here!
Levendi is a brave boy. He looks so cute pawing at the gravel.

You know you love horses when you can watch over two minutes (I'd be up for more, too!) of horses putting up a fuss over piles of gravel!

Non horse people would never understand because they have never tried to scrape concrete mud of a hoof or a boot, fall butt first or face first into a mud hole because the horse you were holding spooked, and last the joy of bathing a horse that rolled in mud and got all sort of questionable stuff stuck on them. Congrats on the gravel. Love you blog!

Non horse people don't understand ANYTHING we do....getting gravel is no different! LOL! Your are very fortunate to have it....we have sinking sand conditions...I'm headed to the local farm store for new boots today...mine are worn out after five years of wading in mud/water/snow! Never fun trying to lead horses in slippery muck!

Wow, gravel!!! I too am envious, would love to have lots of gravel around here in places! Love the horses, so beautiful; loved the video.
Your farm looks lovely, wish our farm had a little more flat to it. We live in a hollow, lots of steep hills around us.
Jane

I remember the thrill of a gravel delivery. When we lived in Va on our former farm, we had a long driveway, almost as long as yours, but not paved. After the UPS and Fedex trucks almost got stuck forever in the Va. clay, we brought in some gravel. I love the video of the horses and the pic of Apollo and Ivan. They are inseparable!

I love gravel! We just put some down in our paddock - but we need lots more than you, because we have real boot-sucking mud around here. I can well understand your utter joy in seeing the trucks. GRAVEL YAY!!!

after reading i immediately sat my man down at this laptop and said,

no kidding, i think my man understands me better now that he understands how we feel about mud solutions.

i have a mud solution post coming up soon, but i am waiting for more wet weather to convince myself we have it managed.

Yay, gravel! For the last few weeks I've wished the stable where I lease would gravel an entire paddock, lol.