A Chainsaw Fit For a Queen

. . . or the queen of the retirement farm anyway! I have been campaigning for my own chainsaw for quite some time. They are incredibly useful tools that have many uses. Our favorite uses for chainsaws or cutting up old trees and repairing fence boards. Neither Jason nor my dad would allow me to use any of their (many) chainsaws. They claimed I did not have the upper arm strength to control them in the event that one of them "kicked back" while I was using it. I guess they thought I would end up looking like the star of a horror movie or something.

I mentioned in yesterday's post that I got a present for myself during our trip to Home Depot. In case you haven't already guessed I bought myself a chainsaw! I dragged Jason over to look at them and of course he picks up the biggest, heaviest chainsaw they had that weighed 40 pounds and hands it to me. With a smug look on his face he pronounces "see, you can't control it, it is too heavy" and considers the conversation done. I ignore him and continue looking at the chainsaws, thinking how convenient it would be to be able to just repair a board at MY convenience, and not someone else's. Finally we agree on a very small chainsaw and I am triumphant.

When we were on our way back to the farm I called my dad and proudly announced to him that I had purchased a chainsaw for myself. This was met with silence followed by "what are you trying to tell me?" Well duh, I'm telling you I bought a chainsaw?? Jason takes the phone and explains to him that it will all make sense when he sees the saw we've purchased. I gave him a dirty look.

I showed off my chainsaw to my parents and my nephew Tristan (Tristan is visiting for a week). My dad suggests that Tristan go get his Fisher Price chainsaw so we can compare them. Jason laughs and says "this is not a toy, it says so right on the box." I am not amused. 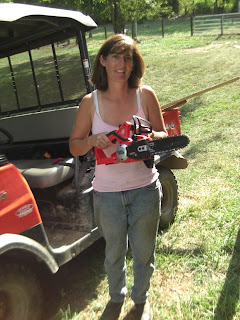 My chainsaw on the left, Jason's on the right 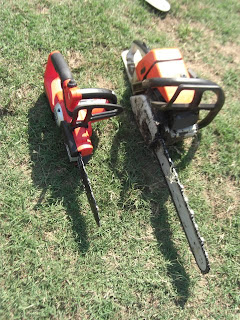 Today my chainsaw was put to the test as we went out to repair a couple of broken fenceboards this afternoon. Repairing a board isn't rocket science, just a pain in the rear.

Removing one of the face boards 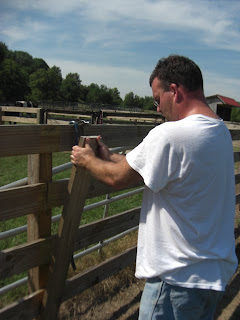 Removing the old nails from one of the face boards 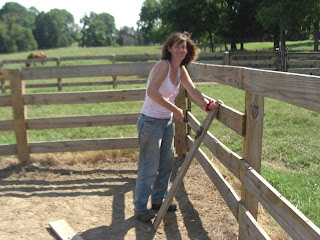 Using my new chainsaw to remove a broken board 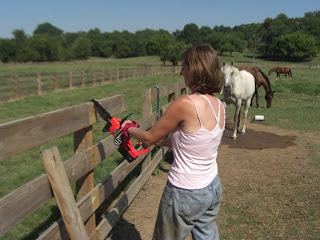 Nailing up the replacement board 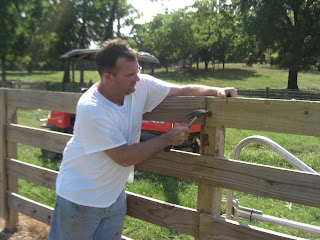 Putting one of the face boards back up 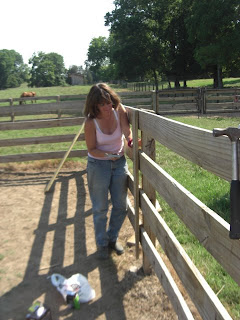 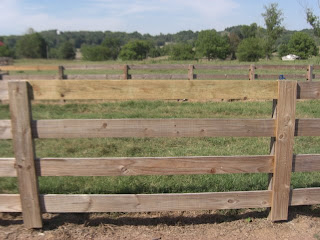 As it turns out, not only did my chainsaw get the job done well, Jason even liked using it better than his for this purpose! So my "girlie" chainsaw isn't such a useless tool after all.

Posted by Melissa-ParadigmFarms at 4:28 PM

I love your chainsaw! Go Melissa!!!

I am looking for this saw as well, really not having to wait for help is perfect! What brand is it?