How Many Horses Are In That Pasture?

Morning feedings are one of my favorite times of the day. It is quiet and peaceful, and all of the horses are thrilled to see you coming (I pretend they are thrilled to see me, really they are thrilled about the food), they nicker at you, and sometimes they put on a show and come at a full gallop from the opposite side of their field. I have a daily routine in the mornings for feeding everyone and generally the horses follow a set routine as well. One morning I was walking down to one of the pastures, as usual scanning through the fields making sure everyone is there and waiting.
I did my head count and realized something was off. So I did my head count again, and something was still off. Finally the fog cleared out of my half-awake brain and I realized I was counting two extra horses! But I had already done my head counts in all of the other pastures as I took my early morning walk and all was as it should be. I was now wide awake and almost in a run as I was heading toward that pasture, completely freaked out and wondering what the heck was going on. As I got closer I realized that two of the horses hanging out under the tree weren't horses at all, they were cows!
Extra horse number one 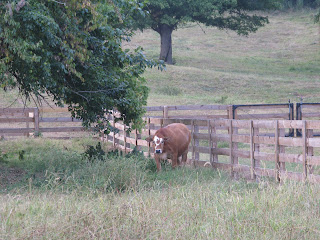 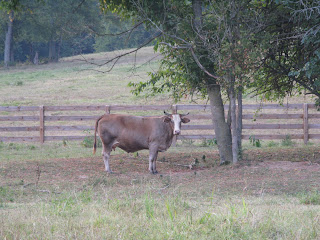 I have to say neither the cows nor the horses seemed particularly bothered by the situation and they were all grazing happily or standing around resting a hind leg and mostly ignoring each other. On the other hand I was really bothered by the situation. We do have some cows on the farm, but I had no idea how they would have gotten into one of the horse pastures. I walked the fence line all the way around the field. All gates were closed securely and there were no broken boards anywhere. So the cows were either playing limbo and these two had an impressive win, or they were inspired by the U.S. team winning the gold medal in show jumping and decided to give it a try. Neither of these scenarios seem very plausible to me, but they are the only ones I can come up with.
Now I had the challenge of removing the two cows from the horse pasture. Of course when the horses realized I was herding the two cows out of the pasture they immediately decided the cows were their new best friends and that they were incredibly herd bound to them. And they were going to go WITH the cows. I knew everything was going too easily as I quietly walked behind the two cows and herded them towards the gate. Now I couldn't open the gate even though the cows are right there because the horses will go with them.
It finally dawned on me that I had the easiest solution in the world to this dilemma. Feed the horses on the opposite side of the field and herd the cows out while they ate. So I hike over to the opposite end of the field and hold up their feed bags, and the horses immediately decide the cows really aren't that cool after all and coming charging over. I put on everyone's feed bag and hike back over to the other end of the field, open the gate, and shoo out the cows.
Nice hock engagement, maybe they were trying out for the show jumping team 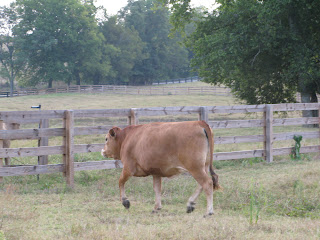 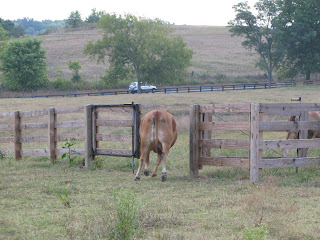 This must not have been the jump off round, she isn't making a final dash through the timers 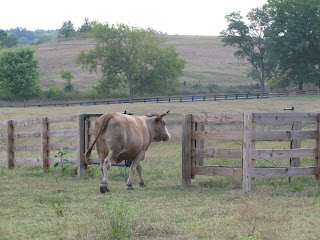 Unfortunately I did not take any pictures while the horses were interfering with my cow cutting. I simply didn't have enough brain cells to handle taking pictures, cutting cows and herding horses all at the same time, especially first thing in the morning. I also jogged a few miles as I made my way back and forth across the pasture and was a bit frazzled and out of breath. I was fairly impressed with myself that I managed to do accomplish all of that without calling in reinforcements. Not bad for a morning's work!

Awww! Extra horse #1 is my favorite cow! I am glad you still have her! She is so sweet! I call her "Apple" since it looks like she has the Mac symbol on her forehead! :D

That description made me laugh ! Both Melissa and I studied the picture, and danged if she doesn't have an apple in the middle of her forehead ! We've only had her for TWO YEARS without noticing ! LOL !!