Missy is an adorable large pony who we have the pleasure of hosting in her retirement. Missy has truly earned her retirement and her golden years as she knows what it is like to work very hard for her living. 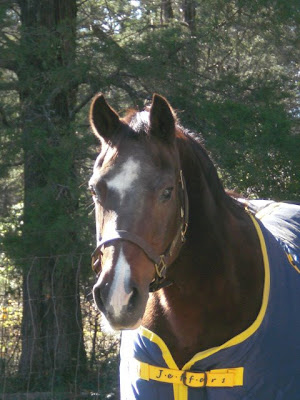 Missy worked for most of her life on a dude ranch out west. (I'm leaving out some specifics to protect the guilty). Her job was to be the safe and reliable mount for the kids visiting the ranch. She must have excelled at her job since she worked at the ranch until her late teens. All of the years of hard riding finally caught up with her at that point and she was repaid for her sixteen or so years of nonstop service by being dumped in the kill pen, very thin and crippled. 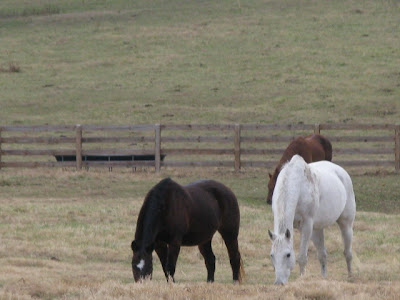 There was a guardian angel looking out for Missy though. An employee of the ranch was able to network on behalf of Missy and made contact with a family who agreed to purchase Missy and provide her with the home she had earned. Missy was literally pulled from the kill pen at the eleventh hour and her life suddenly took a dramatic turn for the better.

Teddy and Missy enjoying our snow that we had for almost an entire day in December. In Missy's former life (and location) I have no doubt she saw a LOT of snow, and I'm sure she wondered why we were so excited about this! 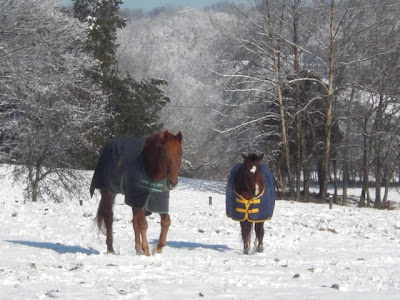 The family nursed Missy back to health. Thanks to their love and care Missy gained weight and her coat became healthy and shiny. Through cooperative efforts with their vet and farrier Missy was sound and comfortable enough to do light trail and pony rides for their children and their friend's children as well. Missy was and is wonderful with small children thanks to all of her years at the dude ranch. After a few years even the very light riding became more than her arthritis could handle and Missy was fully retired.

Missy never has to worry about being emaciated and hungry anymore 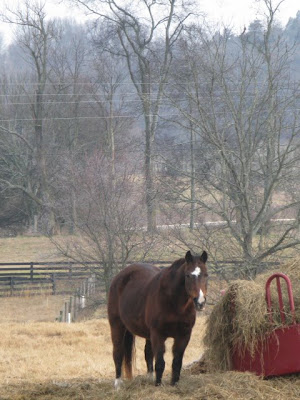 We are thrilled to have been chosen to host Missy's retirement. She is a wonderful addition to our family of retirees and wins the heart of everyone. She has the kindest eye I've ever seen on a horse and is incredibly gentle and quiet. Every horse crazy kid should have the opportunity to love a pony like Missy. 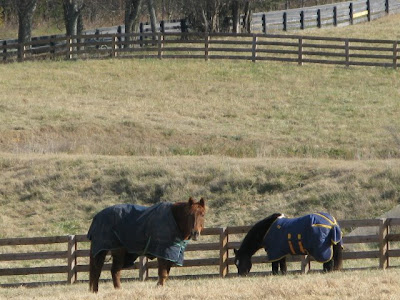 Missy strolling through the pasture. She also has a nice wardrobe in her closet now as well! 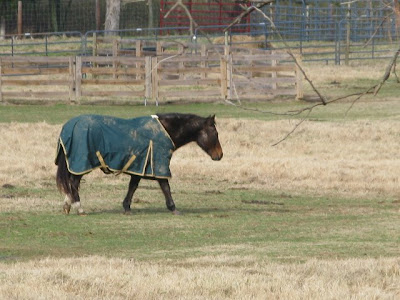 Posted by Melissa-ParadigmFarms at 9:07 PM

That is the absolute cutest pony I have ever seen! Well, except my Little Ben of course. LOL!

She is precious!!!!! I can't believe some people!

Poor girl :( She's lucky now though, being able to live with you!! She's probably thinking to herself, "why didn't I think of this before?" Too adorable.

She looks lovely! I just don't understand people, it makes me so angry. But it's good to know there are kind people in the world, too.