And did someone forget to tell me??? This weekend it seemed that we had starring roles in the movie Groundhog Day, where the same day keeps happening over and over. In the last couple of weeks we have:

1. replaced a leaking water hydrant
2. dealt with a skunk in one of the pastures that seemed determined to be with me and the horses
3. dealt with snow

1. replacing a leaking water hydrant
2. dealing with a skunk IN THE BARN this time!!
3. watching snow fall again

Our first snow this winter was the first week of January. We had about a half inch of snow accumulation the first time around. It may not seem like much but it did close the schools for two days! 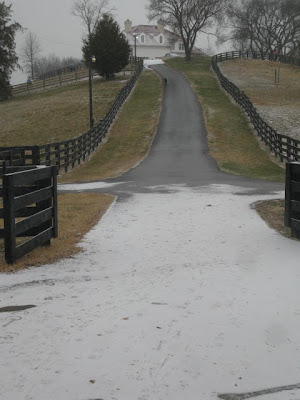 Our 2nd snow of the winter came two weeks ago. This one brought us about four inches of snow. This shut down schools and businesses for almost a week. (this is the south, we don't "do" snow!). 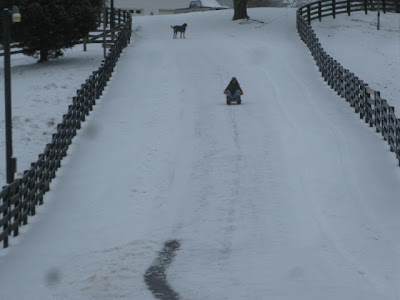 Maybe our third snow of the year doesn't really count. By this afternoon the dusting we had in places was completely melted. Here is Snappy grazing with a few visiting geese late this afternoon. As you can see there isn't any white stuff hanging around. This is much more typical of how snow usually happens here. 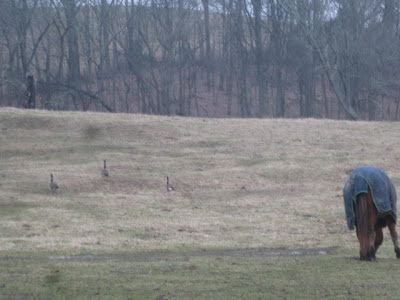 In regards to the weather, I am tempted to cram Punxsutawney Phil back down in his hole and tell the rodent to try again! Thankfully the snow that came down throughout the morning and put a dusting on the ground quickly melted by early afternoon. However it looks like it could snow again tonight. The one thing that goes through my mind as I look at our weather forecast is WTF?? The good news is that it isn't really overly cold, barely cold enough to snow. We shall see what tonight brings.


Jason and I also had the pleasure of replacing another water hydrant this weekend. You might recall when we we trying to determine where the leak in one of our water lines was, I tried to participate in the conversation between my Dad and Jason. I told them that I thought the leak would be at either "X" or "Y." Like I said, they patted me on the head and dismissed me. Of course the leak turned out to be at X. ('nuff said!).


It turned out that location Y was also a problem. (Darn, at this point I would have been happy to be wrong!!!) The handle never seemed to work quite right, it was really hard to deal with. Then one day the water just wouldn't shut off completely at that hydrant. Jason tried to repair the hydrant but it turned out the set screw was bent. Great.


Jason digging out the old hydrant 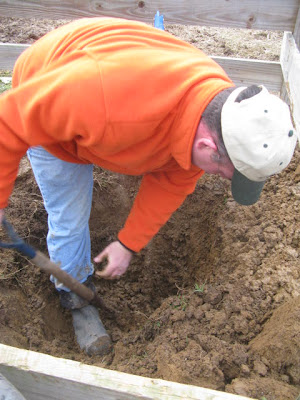 Jason never vocalized what was going through his head when I took this picture. However I am pretty sure it was something along the lines of "get that camera out of my face before I take these pipe cutters and . . . (you can fill in the blanks from here)." 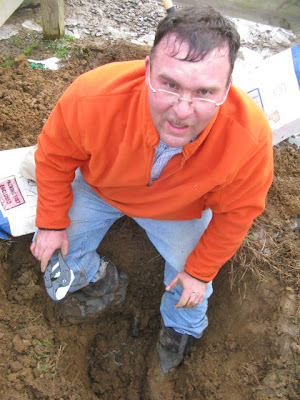 Apparently Jason and I learned a lot replacing the first hydrant because this job went much faster. We "got 'r done" in a little over an hour. I was pretty impressed by that. I made important contributions like spreading joint compound on the parts, hauling gravel and taking pictures. Jason did all of the digging, refilling of the hole, and pounding the hydrant connection into the pipe (i.e. 99% of the work). I have to say actually connecting the hydrant to t he pipe is the hardest part of the job, even harder than all of the shoveling. Jason always looks like he is about to keel over after he's gotten the hydrant connected to the pipe.
One newly installed hydrant 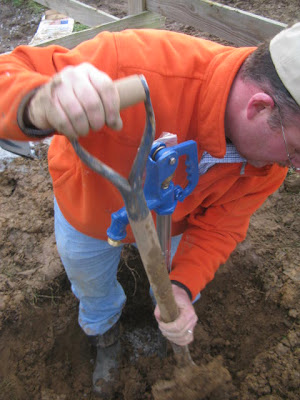 Our other exciting event this weekend was the skunk in the barn. Yes IN THE BARN. I go in the barn Sunday morning and I notice something scurrying away and into one of the stalls out of the corner of my eye. I just assumed it was one of the cats. It turns out it was a skunk. And it went in a corner of a stall and refused to emerge. Jason and I had no idea what to do. We kept streeeeetching ourselves around the doorway to look at the skunk and see what it was doing. It was always just sitting there.
After much discussion and deliberation we made the decision to leave the stall door open, turn the horses back out, and hope the skunk would decide to leave on its own. We went on with our day and forgot about the skunk for awhile. Apparently something startled the skunk because when I went in the barn to see if the skunk had left I was pretty much knocked down by the smell. Awesome. I streeeeeetch around the stall entrance again to see if he had at least left. Nope, still there, in the exact same spot.
At this point I made the executive decision (yes, *I* made the call!) that the skunk would have to be dispatched. He had already sprayed once in the barn, it was only a matter of time before the dogs or cats caused another incident, and he showed no inclination to leave. The skunk crossed the rainbow bridge to skunk heaven. I washed our clothes three times, I think the smell is mostly out now. It is anyone's guess as to when the overwhelming skunk smell will be out of the barn. I think my clothes will have to be bleached every day after being in the barn. Sigh.
That pretty much sums up our exciting weekend. Leaking water hydrants, snow and skunks - good times!!

MyLight, Lily and Buffy were being playful on Saturday:
Cloudy and Olivia watching the snow from the barn entrance this morning 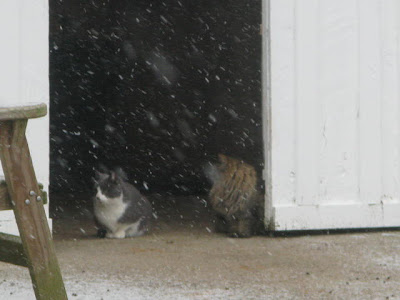 Another picture of Olivia and Cloudy 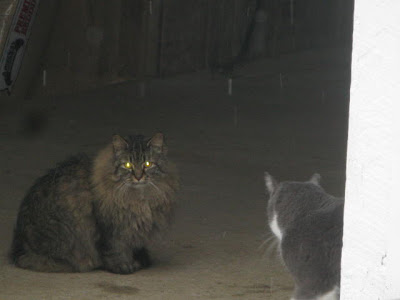 Elfin grazing in the snow flurries 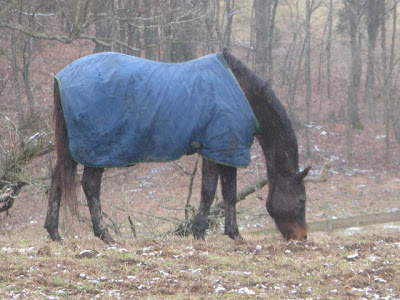 Chance and Thomas. This is as much snow as we had on the ground before it melted by early afternoon, some areas had a good dusting, others nothing. 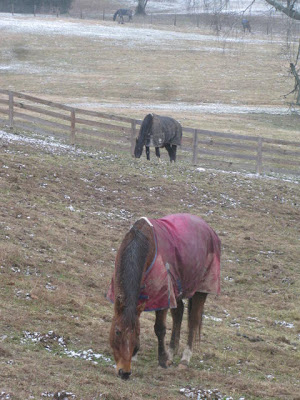 Asterik was falling asleep with his head on the fence. His head kept inching down and pulling up his lower lip. 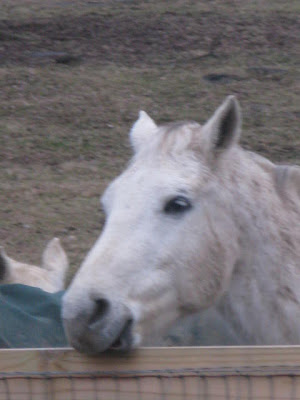 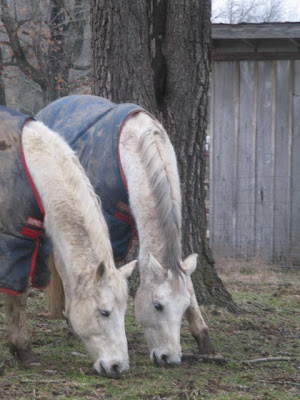 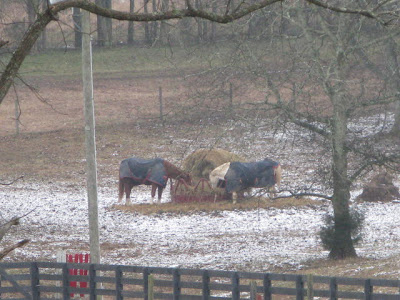 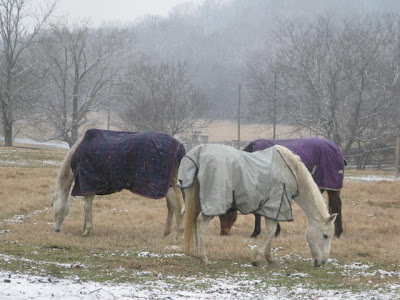 Buffy with Missy behind her 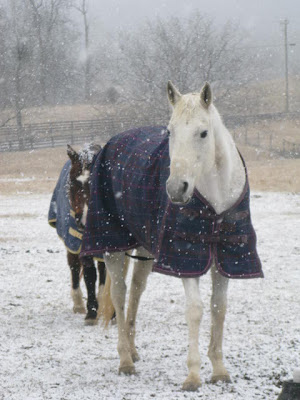 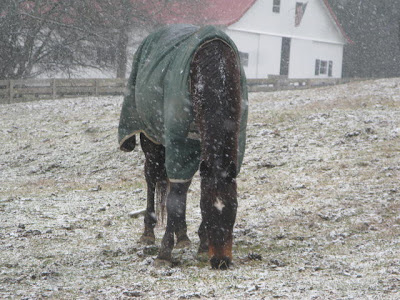 Sparky the donkey; I liked how the snow flurries were settling on his spikey mane and outlining his ears 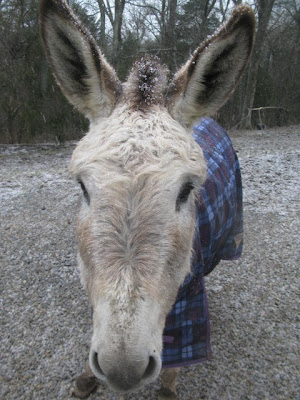 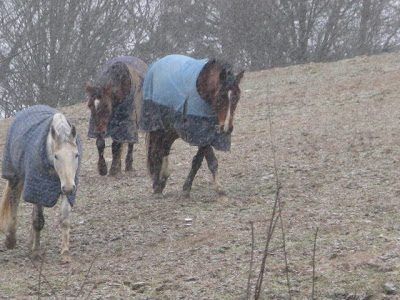 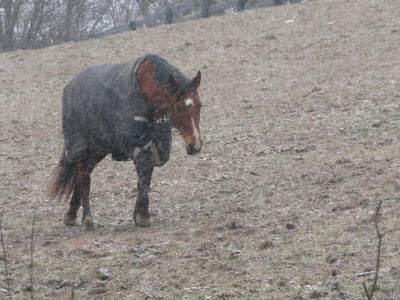 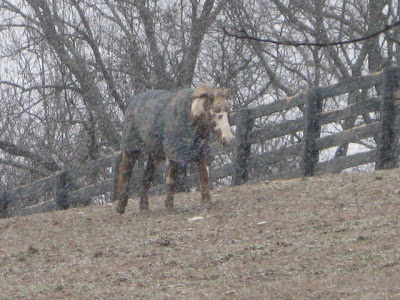 Posted by Melissa-ParadigmFarms at 5:41 PM

I like the snow comparison pictures, too. But no skunk picture?

Always work to do on the farm, we have replaced two of those spigots, not that often though!
Awww, love Sparky the donkey, is he a paint? My little Pokey is a blue-eyed painted donkey. and Bonnie, I swear she could be Gilly's mom. Her face markings are almost identical to Gilly's!

That looks like my Lil! Sorry you're afflicted with bits of our winter weather, and that Jason's having to work so hard on water lines - perhaps spring will come soon.

You have mud splooters on your video camera lense! hee hee I like your sugar-coated donkey!

Jane, I have seen pictures of Pokey on your blog and he is so cute! Sparky is not a paint, just your standard "donkey coler" under the blanket.

Isobelle I wish I just had mud on my camera lens. It gets drug around the farm so much it is full of dirt and the lenses desperately need to be cleaned. Probably not going to happen though!

We have a skunk residing with the goat in his shed. I came face to face with him one day when I opened the door. I don't know which of us was more surprised. I don't see him anymore but I can see where he has burrowed in the straw and that wonderful aroma seems to linger in the air. I don't go in the shed anymore without a flashlight!

A huge skunk lumbered up my driveway the other night and I thought of you (sorry)! Hazel knew it was out there long before I could see it. I couldn't figure out why she was growling, she almost never does that. Smart girl!

I was going to comment on your last skunk post that I would have been tempted to shoot it, even if it hadn't been acting funny, before it took up residence in the barn. Hope the smell doesn't persist too long!

I used to ride Cinnamon Twist :) She looks so happy and I'm overjoyed that she's relaxing on your gorgeous farm! Give her a carrot for me!